The Avatar & The Engineer

In the aftermath of the Equalist Revolution's collapse, Team Avatar regroups on Air Temple Island and Asami contemplates her future.

As the sun began to set, bringing an end to a long, dramatic day, most of the occupants on Air Temple Island had gone to sleep. By four o’clock the group had reassembled at the house, each with a story to tell.

General Iroh and Bolin managed to get a lift back to city from the farmer whose barn they had crashed into. The farmer agreed after Iroh gave his assurance that the United Forces would cover the damages.

Korra and Naga hitched a ride back to the city with a group of soldiers. She left Hiroshi at the airfield, under guard along with a small group of captured Equalists.

Despite the first wave of United Forces ships being met with heavy resistance leading to the destruction of the fleet, the second wave, led by Commander Bumi, was met with no attacks. Word quickly spread about Amon’s defeat as well as his deceit. With the end of the Equalists’ very short reign over Republic City, the streets were littered with Equalist equipment and mechs which the military and police were quick to secure.

After briefly losing conscious, Asami quickly surfaced and was unable to locate Amon/Noatak. Tarrlok too had disappeared with the police theorizing he had slipped away in the chaos. An All-Points Bulletin had been put out for both Tarrlok and Noatak but there were serious doubts the pair would ever be apprehended.

It was on the boat ride to Air Temple Island that she told Tenzin about what Amon had done to her. Her airbending master stroked his beard as he tried to conjure up a piece of wisdom from memory. Asami put him at ease and told him it had been a long day. They’d deal with it tomorrow.

After everyone reunited on the island, Korra and Pema whipped up a quick meal. While Bolin launched into a reenactment of his harrowing flying adventure with General Iroh, the rest of the group was too tired to tell their battle stories. Asami politely chalked it up to Bolin’s story outdoing everyone else’s.

After dinner everyone went to bed. Asami however decided to take a walk around the island to clear her head. With a moment to herself she was able to confirm that her bending was truly gone. After all she had been through to get to the point of where she could call herself a full-fledged Avatar and within seconds it was all gone. In the end, Amon got what he wanted.

While trying to comprehend what her future would hold as an Avatar who couldn’t bend, her nostrils were assaulted with the smell of cigar smoke. Two uniform clad figures stood in the meditation pavilion. One of them was General Iroh, now sporting proper medical dressings for the wounds he received the other day. The other man was tall, had pale blue eyes, wild long hair and a beard, which contrasted with Iroh’s clean and proper look.

“Avatar Sato,” Iroh greeted, cigar in hand, “I don’t know if you two have met. This Commander Bumi of the Second Fleet.”

The elder commander lit his cigar and grinned at Asami. “Nice to see you again kid. We met a number of years back. Back when you were still getting your butt flung around the training course.”

Iroh looked embarrassed and was about to extinguish his cigar when Bumi let out a laugh. “Is that what he’s calling it? Back when we were kids it was simply known as a gazebo.” He leaned back on the railing and took a drag of his cigar. “I heard what happened kid. Let me share some wisdom with ya. After a day of battle, it’s best to leave reflection for tomorrow. Nothing can be gained by such a fruitless exercise.” He turned and looked out over the bay. “Despite what they tell you kid, power and perfection doesn’t define you. It didn’t for Dad. I once asked why he bothered with diplomacy when he could use his Avatar powers. He told me that sometimes using force creates bigger problems but at the same time so does failing to act at the appropriate time. It’s all about balance. Or something like that. I took his advice though. I’ve managed to get out of dangerous situations but using my wit and charm rather than my fists.”

Asami rubbed the back of her neck. “I understand what you’re saying Commander but—“

“Oh. Right. I understand what you’re saying but what’s the point of diplomacy when you don’t have the power of the four elements to back me up? Because eventually the world will now what Amon did to me.”

Bumi took another drag of his cigar and considered this. “Hmm,” he hummed, stroking his beard, “well…how’s your right hook?” Asami sighed and Bumi chuckled. “Sorry kid, I usually come up short on the motivational speech. Thankfully in the military I just have to bark an order and the job gets done. Tenzin might be the better one to talk to. Just remember that I’m still the funnier one.”

This comment made Asami laugh which lifted her spirits slightly. “I’ll keep that in mind.”

She bid two good night. As she walked away she could overhear Bumi offering his flask to Iroh and being rejected. She followed the pathway to the stairs and began to climb it, deciding that it was time to turn in.

Reaching the top of the stairs Asami found Korra sitting by herself, looking equally haggard. Next to her Naga lay curled up, sleeping peacefully. The Water Tribe woman hadn’t noticed her yet as she stared at her feet.

Korra’s eyes met hers. “Hey Asami.” The other woman stared into those dark blue eyes and her stare wandered to her tan skin and her long dark brown hair, which even messy was still quite—Asami realized with horror she had been staring too long.

Asami cleared her throat. “Mind if I join you?”

Korra nodded. “Please.” She moved over which wasn’t necessary given how wide the stairs were.

They sat together in silence as the sun descended over the horizon. As darkness fell signs of life returned to Republic City. Together they had brought the city back from the brink but ending Amon’s revolution came with a price.

Korra studied Asami’s face as the latter watched the city begin to light up. Given all that had happened, she wondered if and how her friend would recover from this.

“What now,” Korra asked softly. Not that she really wanted to know. Merely she felt like she needed to say something to break the silence.

Surprisingly Asami let out a small chuckle. “I was kind of hoping you would know. You’ve gotten me out of a few jams.”

Korra smiled. “This is true. But it’s been quite a long day and I think I’m fresh out of ideas.”

“It has been quite a day,” agreed Asami. She let out a tired sigh as she leaned back on her elbows. “How about we just sit here for a while? Until one of us comes up with a brilliant plan.”

Korra flopped backwards onto the ground. Lying next to her was the Equalist glove. The same one she had found during the attack on the arena and the same one that helped her expose Hiroshi’s involvement with Amon.

She grabbed it and tossed it away into the bushes. “Sounds good,” she said as she closed her eyes.

Asami awoke to the sound of rolling waves. With a groan she slowly sat up and saw that it was daylight. “What?” Now fully awake she noticed her surroundings had changed. She was sitting on a beach, it seemed to be early in the morning. Republic City was off in the distance, partially obscured by the morning fog. Korra was gone but someone else was sitting next to her.

Avatar Aang stared off into the horizon.

It doesn’t seem real, does it?

Another voice came, this time female. A familiar voice.

You know with this means I will no longer be an Air Nomad.

Yep. My traveling days are over. I’ve finally found a place to call home…with you.

The voices faded away. Echoes of a distant memory.

Aang turned to face Asami, giving her a small, sympathetic smile. “Every one of our incarnations has always had ‘One of those Days.’ This has been one of them.”

“Seems like I’ve had nothing but ‘those days’ since I got here,” Asami retorted. Her predecessor nodded as he couldn’t argue with that. She watched as the soles of her boot dug into the sand. “I guess this is where it ends for me, huh? What use is an Avatar who can’t bend?”

Asami’s head snapped upwards as she turned towards Aang. “Pardon?”

“It isn’t gone,” Aang said calmly, “Only the Avatar has that power, what you saw was Amon, or rather Noatak, using bloodbending to block your chakras. Essentially what you and the others have experienced is a prolonged version of chi blocking.”

Asami took a moment to process this information. “Is it permanent?”

“I wouldn’t think so. After all it’s not like your bending is gone forever, merely it’s locked away and you have to work to unlock it. Same goes for the others who fell victim to Amon. It’ll take a little time though.” Aang gets to his feet. “Sorry I can’t be precise with this information. After our encounter with Hama, Katara and I rarely discussed the inner workings of—“ Aang was cut off by Asami wrapping her arms in a hug.

“I hope you’re right,” she said softly, barely audible over the crashing of the waves.

Aang gently hugged her back. “I’m proud of you Avatar Asami.”

Asami smiled to herself and opened her eyes. “So now—“ It was nighttime again and she was staring up at the stars. She lurched upwards and peered around to get her bearings. She was back to where she was before. Aang was gone. Korra was hunched over fast asleep. “Korra!”

Korra’s eyes flew open and she jumped to her feet, stumbling a bit on the steps as she did so. “What? Where?”

Korra looked at her friend with a perked brow. “Locked away?”

“It’s complicated,” Asami waved her hands dismissively, “The important thing is that I can get my bending back.” She turned and descended the staircase. She heard Korra call after her, “Wait! Where are you off to?”

“Right,” Korra said brushing herself off, “I’ll be right…there.” Korra collapsed back onto the ground, exhausted. She yawned as her body lost its fight with the laws of gravity. “Right behind you.” She fell backwards onto the ground with huff.

A few feet away Naga lifted her head, yawned and went back to sleep. 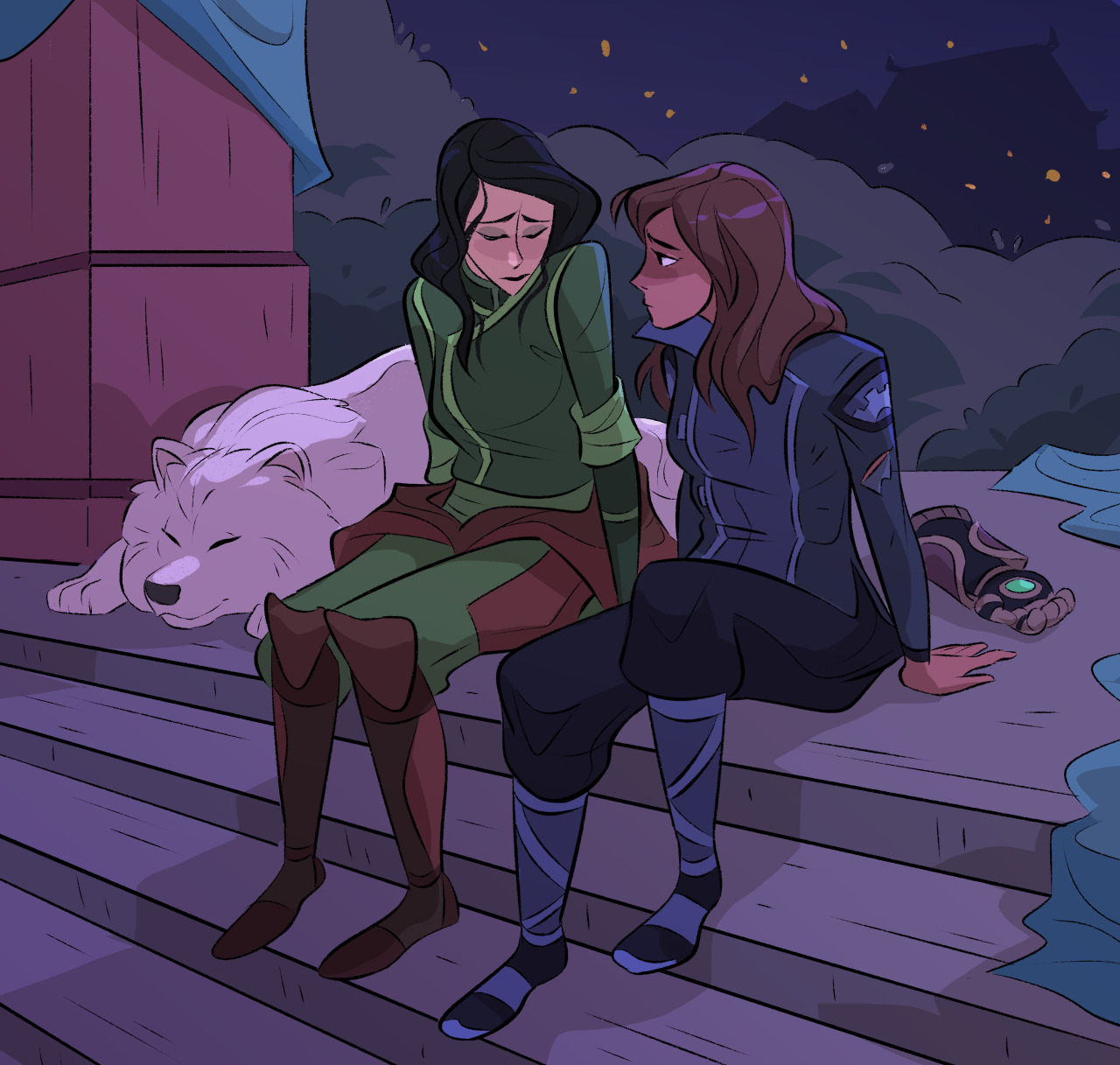