We pause at #4 - Felix's Refuge - Write from a secondary character’s POV and #3 - The Highland Mountains - Create a Bond themed snack.

Our lads spend some time with an old friend who, coincidentally, happens to be making something tasty! 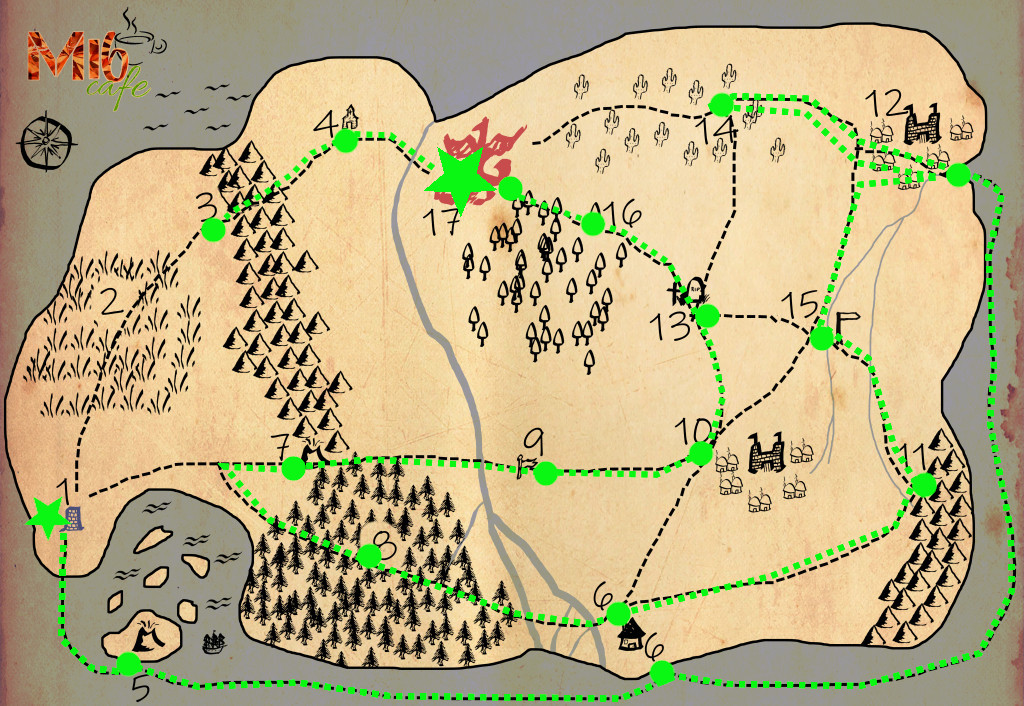 Outside, Alec pulled the toy car from his pocket and tossed it to the paving. Q nodded his approval as it rapidly expanded into the sleek SUV they had been using for so much of the dream.

“Where to?” James asked as they settled inside, Q claiming the passenger seat and Alec leaning forward from the backseat to tangle his fingers with both of theirs.

“I’m a bit of a completist,” Q admitted. “I’d like to follow the last path on the map back to the beginning.”

“Objective #4 it is then. On to Felix’s Refuge, James,” Alec ordered grandly.

“What are we going to deal with there?” James asked.

Q pulled a face. “When we were planning the map, I thought it’d be brilliant to ask that that one be written from a secondary character’s POV. So don’t be alarmed if we suddenly…”

Felix leaned his elbows on the old stone wall surrounding the garden and watched the distant vehicle wind its way along the road. The old abbey he was renovating into a home sat at the edge of the mountains and had a panoramic view of the lowlands beyond. The mountains at its back gave it a secure feel that comforted him after a lifetime of professional wariness. He turned and made his way inside. If he was going to have unexpected visitors, he should probably offer some hospitality.

He half-expected an assassination attempt — most agencies worked on the idea that a retired spy was a dangerous loose end — so he was pleasantly surprised to have James Bond arrive on his doorstep, with Alec Trevelyan and Q in tow.

“James!” He grinned and pulled the agent into a brisk hug. It’d been some time since he’d seen him, and he had to admit Bond looked better than he ever had. There was a light in his eyes and life in his expressions, and the same was true for Trevelyan. While the two agents had likely kept each other sane over the years, he had no doubt that it was the addition of Q to the relationship that had brought a vestige of humanity back to two of England’s most abused weapons. “I’d guess you’re on a journey, but surely you have a little time to relax before you continue.”

“We do,” Bond said with a glance at the other two.

“Then let me get you set up with something pleasantly alcoholic, hey?” Felix led them to an overstuffed sofa in front of the huge stone fireplace and let them arrange themselves while he opened the liquor cabinet.

It didn’t surprise him that Trevelyan sprawled across the sofa first and then pulled Q down across his legs, but that Bond easily and willingly entwined himself with the other two was a little startling. Felix always thought Bond had carried himself like he had a pole up his rear end and to see him slouched back, his limbs tangled with the other two, while he played with Q’s hair was astonishing.

He handed them each a generous glass of bourbon and gestured towards the open kitchen. “I was just about to start cooking, do you mind?”

Felix grinned at him. “Not at all. It’s a pleasure to see old friends. It’s just that I’ve been looking forward to making a very specific treat all day. It’s more than fine with me if you just want to hang out where you are.”

“What are you making?” Trevelyan asked with an eyebrow as Q relaxed back against them.

“Scottish tablet.” Felix smiled at the way James’ eyes lit up and headed for the kitchen that was open to the rest of the main floor. Behind him, Bond attempted an explanation to Q of what tablet actually was. He heard ‘sugary’ and ‘somewhat grainy’ and ‘medium-hard’ and ‘melt in your mouth’ and ‘no, not really fudge-like at all’ as he assembled his ingredients and buttered a deep-edged baking sheet.

Four and a half cups of white sugar went into a big pot with a cup of whole milk and six tablespoons of butter over low heat. He stirred it gently until the sugar was completely dissolved and then added a can of sweetened condensed milk. After bringing it to a full boil, he reduced the heat enough to get a brisk simmer out of it and started stirring.

His three guests had fallen silent and he glanced up to find them watching him. “Have to stir for twenty minutes,” he said apologetically.

“However did you learn to make this?” Q was already sniffing the air even and Felix grinned.

“James, you remember that one guesthouse off the Firth of Forth?”

Bond burst into laughter. “I remember you charming that gran nearly out of her knickers.”

“I charmed her out of a very old, very cherished family recipe, though she graciously taught me to use a can of sweetened condensed milk instead of taking four hours to make it myself on the stove top before starting anything else.”

Alec nudged him. “Yes Q, civilisation existed before grocery stores and things canned for convenience.” Q smacked Trevelyan’s shoulder and that started a tussle on his thankfully study sofa.

Felix kept a close eye on the expanding mixture, glad he’d remembered to use the largest pot. His first experiment had overflowed the small pot and had required a fire extinguisher to put out the resulting fire.

Once the the mixture started darkening, he switched off the gas and began vigorously stirring until the tablet thickened properly. After pouring it into the greased tin to let it settle and start to cool, he set a timer for another twenty minutes and dropped into the chair by the sofa, shaking his arms out.

“That was quite the workout,” Q remarked.

Felix grinned at him. “Means I can have at least the first few pieces guilt-free.”

“What do you still have to do?” Trevelyan asked, watching Bond crane his neck toward the kitchen counter.

“When the timer goes off, I’ll need to score the top with cutting lines so it will break cleanly once it cools.” Shattered tablet was still tasty but offended his sense of accomplishment with a job well done. Bond made a mournful sound at the wait.

He sipped his bourbon and watched the three men tease and banter with each other on his sofa. He’d considered a fling with Bond once or twice in the past, but after meeting Trevelyan, he’d backed off. The other double-oh served Bond better than Felix probably ever could have, even with the best of intentions. Felix had a protective streak a mile wide and tended to coddle his partners; Bond would never have tolerated that well, even if he’d wanted to. Trevelyan challenged him as much as he backed Bond up, and Felix had recognized it as soon as he’d seen it.

The timer went off and he smiled and got up to mark his lines in the tablet. He made the squares extra generous, knowing he’d be sending some with them when they left.

“Another hour or two to cool completely, James,” he said without looking up from his task. He smirked at the impatient groan that followed.

While the dessert slowly finished cooling, Felix heard the full versions of how the two agents had first encountered their quartermaster.

“James was a prat,” Q said, “but Alec was an absolute twatwaffle.”

Trevelyan snorted. “Well I’d seen you swanning around Q branch before, but I didn’t know you’d been promoted, did I?”

Q cut him a scathing look. “He pulled me aside and said that Q branch was looking a little fraught but he didn’t need anything in a hurry, so he wouldn’t mind leaving a note for the quartermaster if I wanted to have a quick fuck somewhere private.”

Felix burst out laughing. “Goddamn, Alec! I mean, I knew you weren’t famous for your finesse, but Jesus!”

“I think I had squirt guns tucked in my gear for a good couple of months,” Trevelyan admitted ruefully. “I had to call in favors from arms dealers in at least four countries on as many missions until it struck me that I should probably apologize.”

Felix laughed again, pleased at the easy way the three lovers interacted. He might have sighed a little internally for lost opportunities, but there could be no regretting what he saw in front of him. “Well, it’s getting on towards evening, let me wrap up some tablet for you and you can be on your way.”

James drove one-handed, munching on a square of tablet, as they made their way out of the mountains. He met Alec’s eyes in the rear view mirror and then glanced over at Q in the passenger seat, who was nibbling happily on his own piece of the sweet treat.

“All that had to have come from you, James,” Q said with a shrug. “I’ve only met Felix a couple of times, and I had no inkling he might’ve wanted a thing with you.”

“He did,” Alec said with a wry smile. “Or at least he wouldn’t have minded a taste. But dreamsharing has the potential to simplify things, or give them more weight than they deserve, so don’t take this as a great truth of anything.”

They began the descent out of the mountains and Q frowned slightly. “Didn’t we miss an objective after Felix?”

Alec chuckled. “If you mean #3, The Highland Mountains, the objective was to create a Bond-themed snack. James is currently inhaling Scottish tablet, which suits his heritage, and the name itself might be taken as a riff on your role, Q — tablet for the computer genius.”

Marie03, greentulips, Zabava, and Linorien as well as 1 guest left kudos on this work!