Kai left Aichi alone a little too long, and he got snapped up by Ren. Tsundere Kai to the rescue!

(I love writing Kai-kun having his 'Come to Jesus' moments in various ways if ya'll hadn't noticed.)

Ok my dark Lil Kai popped up one more time so I’m making this a series and hopefully, he gets outta my head. 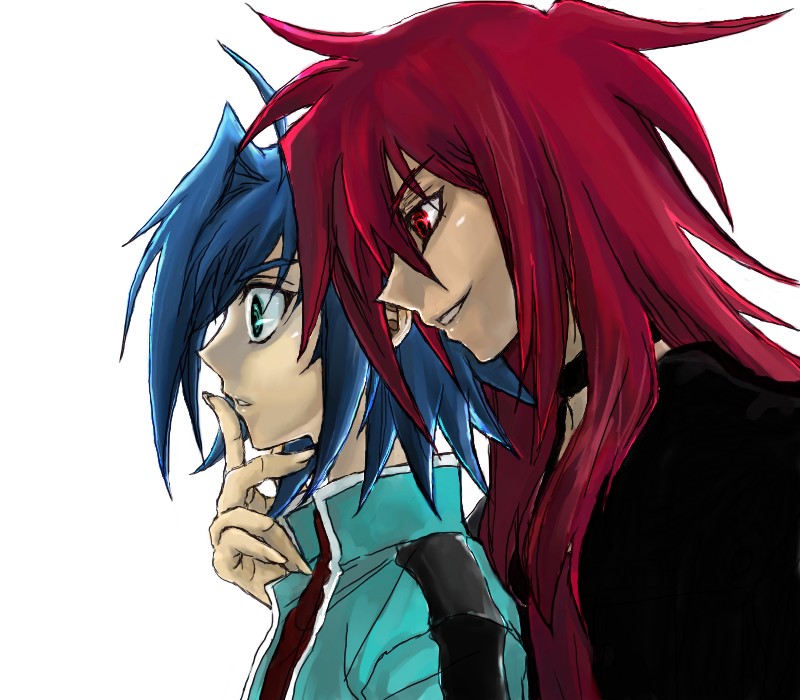 Jun’s voice broke into Kai’s thoughts as he shuffled his deck, getting ready for their umpteenth match of the day.

“Hmm?” Kai looked up to see Jun gesturing past him with his chin as he shuffled his own deck.

“Looks like your shadow is here looking for you,” he smirked. “How about we call it a day? You’ve beaten me enough; I wouldn’t mind making some adjustments again.”

Kai glanced around to see Miwa standing on the other side of the fence, fingers on both hands wrapped around the chain links, patiently waiting for his friend to finish.

Kai sighed and put his grade zero on top of his deck for easy retrieval later. He nodded at Jun and headed over to the gate.

They fell into their normal traveling formation without thinking, Miwa on Kai’s right. “Didja eat? How about swinging by and grabbing a beef bowl?”

They headed toward the restaurant, Miwa knowing from long association that Kai’s silence implied his consent.

“So... haven’t seen you at the shop for a long time.” Miwa’s grin belied his worried eyes as he shot a glance at Kai. He’d been distancing himself a bit ever since Q4’s win in the VF Circuit. He never talked about it with any of them, but Miwa was guessing he felt like he was falling further behind, and possibly regretting joining AL4 for the tournament.

“I’ll be back once school starts next week... maybe. I wanted to fight Jun while I could on break.”

“Ah…” Miwa continued, answering questions that Kai hadn’t asked. “New booster packs came in today at the shop. We’re going to have a tournament next weekend if you want to come. Everybody’s been well. Except maybe for Aichi.”

Ah, here it comes Kai thought. Miwa’s guilt trip for me neglecting Aichi. It’s too hard to be around him though, without...

He sighed, annoyed “What’s wrong with him, now?”

Miwa shot him a worried look. “Not sure. He had been having a lot of anxiety about starting Miyaji. You know, I don’t think he realized they don’t have a Cardfight Club until recently. Most of the shop regulars went on vacation with their families, except him, and he was pretty much alone…”

“Spit it out, Taishi.” Kai interrupted.

“Well, we haven’t seen him in over a week. Emi came in with Mai today and said he’s been spending all of his time with Ren, at Foo Fighter headquarters. She said he’s even sleeping over tonight.” Miwa laced both hands behind his head as he walked, relieved now that he had gotten his concerns out to Kai. “I just thought you might want to know, cuz break’s almost over, and…”

He trailed off, realizing he was talking to himself. He dropped his arms and spun, watching Kai’s back recede as he strode back down the way they had come, toward Ren’s place. His grin reappeared, spreading even wider. “That’s right. Go get him back, buddy…” He whistled as he turned back and continued on his way, job done.

Or what? Kai thought, darkly. It’s not like I have a claim to him...

You know he wants you to.

Kai narrowed his eyes and rang the buzzer as he arrived at the gate at Foo Fighters headquarters. He glared into the attached camera, waiting to be acknowledged.

Tetsu’s voice came through tinny sounding, “Kai. Thought we might see you soon. They’re in his room. Go on up.”

The buzzer sounded, releasing the gate. Tetsu too? Kai wondered if this whole thing wasn’t a setup.

Kai strode through the main first-floor cardfighting arena, where a handful of players were matched up at tables.

Asaka did a double-take as he passed. “Kai?” she asked in surprise. Her face settled into a look of relief, and she turned back and smiled at her opponent, causing him to drop his hand of cards in startlement.

Kai punched the button for the top floor on the elevator, heading straight up to Ren’s room. Rooms, really, as he had a small suite. He opened the door without knocking, letting it bang against the wall.

The sitting room was dim as evening approached. The curtains were still open, and no lights had been turned on yet. Aichi’s messenger bag was thrown carelessly on the floor. Two sets of Vanguard cards had been abandoned on the state-of-the-art card table in the corner, apparently mid-game.

Ren was lying back on his red velvet sofa, with Aichi sprawled over him, lying between his legs. Ren’s mouth was at Aichi’s throat, exposed deliciously by the vee of a thin summer t-shirt.

Aichi turned in startlement toward the door, the soft glow of PSYqualia fading from his unfocused eyes, turning them back from prismatic swirls to sapphire blue. Ren looked up slowly from Aichi’s neck, where he had left a slight bruise. He wiped his mouth on his sleeve, a grin making its slow appearance as he met Kai’s eyes, PSYqualia fading in turn from his red pupils. “Kai. Nice of you to stop by.”

“What the fuck?” Kai snarled.

He strode over to the couch, dragging Aichi up by one slender wrist and thrusting him behind himself as he faced off with Ren, who slowly sat up and crossed his legs, arranging his clothes. “What the hell are you doing? What’s with the PSYqualia?”

“Experimenting. Aichi’s not really comfortable at articulating what he likes yet, so we figured out a spicy little PSY link makes it…easier?” He looked toward Aichi for confirmation, who just hung his head, a small frown on his face. Ren narrowed his eyes, tilting his head as he considered Kai. “Why do you care? You don’t want him.”

Kai barked an astonished laugh “I don’t...? I shouldn't! You shouldn’t either! Because he’s a kid!”

Aichi stepped in between them to face Kai, still rubbing his wrist where Kai had grabbed it. Head down, face shadowed by his hair, he ground out “Why do you get to decide that? You’re only a year older than me. I’m not a kid. Ren realizes that even if you don’t…”

Kai sucked in an audible breath at his angry tone.

Ren giggled. “Kai, don’t be such a hypocrite. You and I started screwing around when we were much younger than him. Really the same scenario, too. I was bored, he was lonely…”

He turned squarely to face Aichi, taking his shoulders in his hands. “Look at me. Is this what you want? He just admitted he’s playing with you because he’s bored.” He gave Aichi’s shoulders a tiny shake, a barely detectable note of anguish in his voice. “I’ll leave you here if you want, but you deserve better, Aichi. Someone who cares..."

Aichi raised his head, eyes blazing. He stared searchingly into Kai’s green eyes for half a minute, trying to judge the intent in his words. Was he finally admitting he cared? He gathered his courage, feeling he couldn’t let this chance pass. His lips thinned, and he advanced, hissing, “Kai-kun. What I want? I want you to kiss me. I want you to fight me. I might even want you to...” He flushed red and reached out to twist his fist in Kai’s shirtfront, yanking his ear down to his mouth as he whispered the end of his sentence into it. Kai recoiled to stare at him in shock, eyes huge.

Kai erupted into sudden motion, driving Aichi back towards the wall, pinning him to it with one arm across his chest. He attacked his lips in a rough open-mouthed kiss, Aichi moaning and bringing up both hands to clutch at the band of Kai’s arm.

Ren shifted on the sofa, leaning far over the arm to see both of their faces. His face shone with unholy glee.

Kai finally pulled away, breathing heavily. He stared into Aichi’s shocked eyes. “I was trying to act noble and leave you be." He dropped his arm, sliding his hand down to capture Aichi's. "Are you sure this is what you want? There’s no going back. And I don’t share.”

“I do!” Ren called cheerfully from across the room.

They ignored him. Aichi slowly nodded, eyes never leaving Kai’s, a tentative shy, and familiar smile blooming on his face.

“Get all of your stuff. We’re leaving.”

Aichi scurried around, collecting his cards, and stuffing various things into his bag before slinging it over his head to cross his body.

He stopped to bow slightly before a now pouting Ren, completely unsure of what to say in this situation. Ren leaned in and whispered “Keep him on his toes, Aichi. And have fun.”

Kai growled inarticulately and reached to grasp Aichi’s hand again, pulling him out of the room and into the hall.

“You’re welcome!” Ren sang as they left. He shifted onto his stomach, resting his chin on his crossed arms, the picture of dejectedness. “Aw shoot,” he said to himself. “I thought it was going to be a fun night, too. Even though I never thought I’d get that far.” He blew a strand of scarlet hair out of one eye.

A minute later, a bright-eyed Asaka skidded to a halt in the doorway, carrying two large paper delivery bags. She was delighted to have witnessed Kai dragging Aichi out of the building, bringing this episode to what looked like its end.

“Master Ren, the dinner you ordered was just delivered!” she said somewhat breathlessly. He motioned without looking for her to drop it on the coffee table.

“I-It looks like a lot of food for one person…” she trailed off hopefully.

Ren turned his head just enough to look her up and down from head to toe. Maybe the evening could be salvaged, he thought. He smiled. “You’re right! Why don’t you join me, A-chan?" His voice turned silky. "And lock the door."

Kai dragged Aichi quickly off of the Foo Fighter grounds, and into the first dark alley. He swung Aichi around so his back was to the wall, eliciting a sharp surprised yelp.

He thrust one hand into Aichi’s hair against his scalp to hold him in place and lowered his head to suck hard at the hickey Ren had left there.

“W-what are you doing?” the younger boy gasped, as his hips squirmed helplessly against Kai’s.

Kai finally raised his head to peer at the large maroon mark now obscuring the former one.

“Erasing him,” Kai said with fierce satisfaction. “Proving I don’t need stupid mind tricks to get you hot.” He smirked. “Do I?”

“Good,” Kai whispered, smoothing Aichi’s hair back from his forehead. “Aichi. I'm sorry I've been a coward. I do like you...more than I want to. I’ll try to talk more. I’ll fight you whenever you want. And for that last thing… let’s just wait for as long as it takes to get rid of the ‘might.’

“Me too. C’mon. If you still want a sleepover, I'll show you my place.” He slid his hand down Aichi’s arm to twine their fingers and led him back to the sidewalk toward his apartment.