This time HyungJ teaches his viewers all about knife play.

Once again, please don’t use this fic as an actual guide. 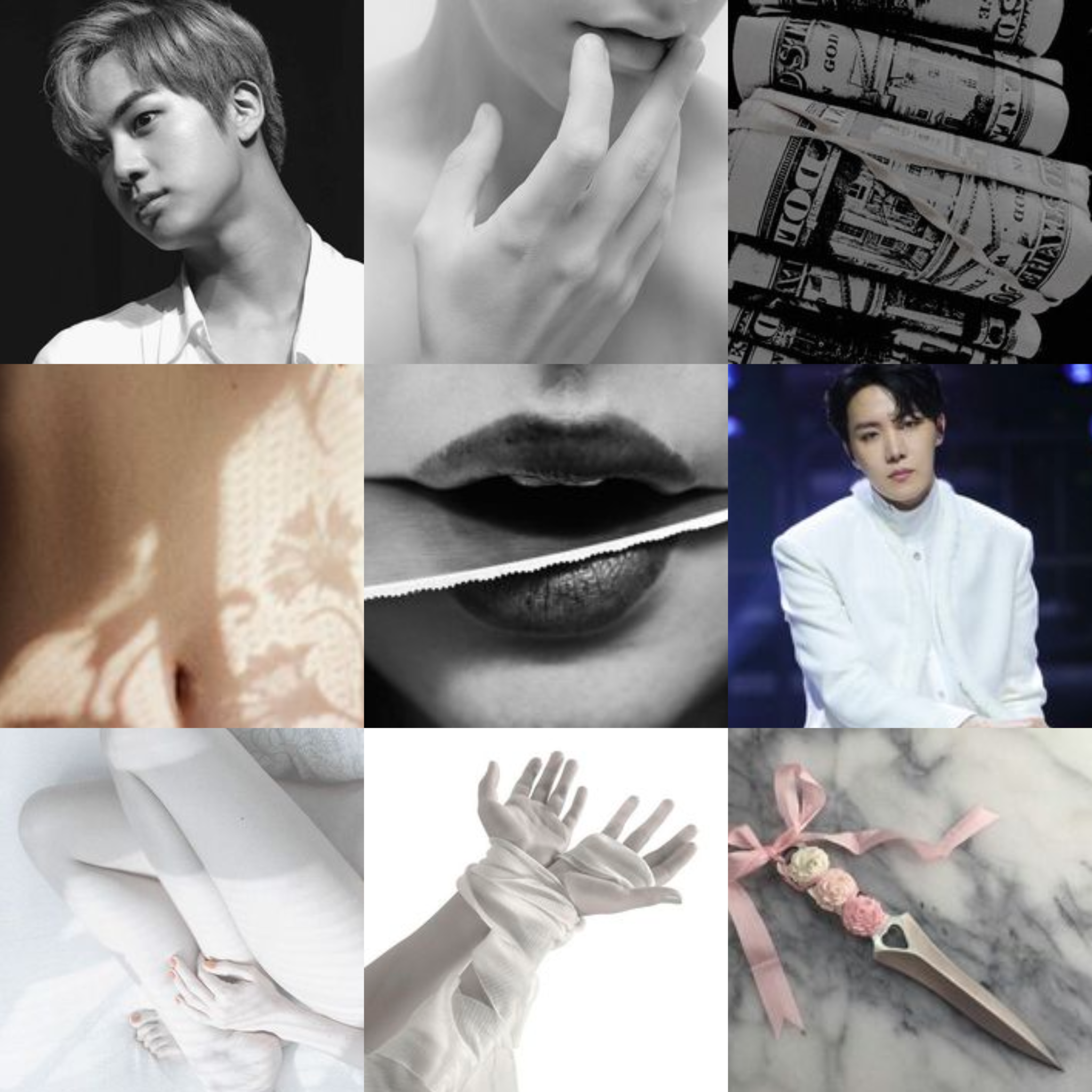 “Once again, I’m joined by someone that most of you know. Say hi to Seokseok, my dear lonely hearts.”

Hoseok, who’s seated next to Seokjin, tilts his head and waves at the camera. “Hello, lovely people.”

Unlike Jimin, Hoseok doesn’t go almost completely silent when he’s in sub space. Hoseok even talks back sometimes, which is why Seokjin is a different dom when he’s with the older roommate.

It’s usually with Hoseok that Seokjin does the more intense scenes. The wax play show a few days ago was an outlier. Jimin had wanted to do something more extreme and wax play was something that he had always wanted to try out. Jimin had really liked their session, so who knows, maybe Jimin will be open to more in the future.

Until then, Seokjin still has Hoseok to play with. Seokjin loves showing him his place, make him obey.

“Today we’re going to use a toy I haven’t used on Seokseok before. Anyone want to guess?”

While the chat floods with guesses, Seokjin grabs the rope that he had laid down behind them and wraps it around Hoseok’s waist. For a moment, all his fans talk about are the restraints he puts on his sub. Seokjin grabs his hands and presses his wrists together. Hoseok only struggles halfheartedly, already halfway into sub space, but he stops when Seokjin secures his wrists together. The last part of the rope Seokjin secures around his shoulders.

All done, Seokjin returns his eyes to the laptop. He scrolls a bit back to read their guesses. Some of them are ridicules, some unimagined but some have guessed more or less right.

He moves back and smiles at the camera. “You guys are very creative but only some of you guessed correctly.”

Seokjin reaches towards the nightstand and a second later, he pulls his hand back into the frame. The blade of the knife he’s holding glints in the ring light.

“Today is not for the squamish, so if you guys want to leave, I totally understand. Blood is not for everybody.” Seokjin licks his lips at the last part and pretends to whipe the blade of the knife off on his lips.

Some people do log off. Seokjin doesn’t mind too much, he knew the viewer count would be fewer when he discussed this with Hoseok. The younger had told in he didn’t mind either, he just wanted to try it out.

“My dear lonely hearts still remaining, you are in for a treat.” He puts the knife down on the bed before grabbing Hoseok by his hair and pulling until his head is tipped all the way back. For a moment, Hoseok dips all the way. But then a breath later, the defiant look is back. “So, lonely hearts, are you ready to take Seokseok under?”

A flurry of replies follow his question. He smiles at the camera, as always happy about their enthusiasm. “Lets start then.”

In order for Hoseok to fully go under, he needs to be stimulated and humiliated at the same time. So, Seokjin grabs his dick and starts jerking him off, turned away so the audience can see, while he calls Hoseok names.

“Such a greedy slut, aren’t you. Worthless little thing you are. Shouldn’t really waste such a beautiful knife on someone like you,” Seokjin growls into his ear. “Should use an ugly kitchen knife on you instead. Pathetic. You’re pathetic. Only pathetic people get off on getting hurt.”

Hoseok is painful hard now and whimpering under the unslaught of words. His eyes have glossed over and he’s hanging his head. He’s ready.

The whimpers turn desperate when Seokjin lets go of Hoseok’s dick. It hangs there all red and hard between his thighs.

Seokjin picks up the knife from the bed and grabs a lighter off of the nightstand next. He switches it on and holds the blade of the knife inside the flame. He moves it back and forth as he looks into the camera. “It’s important to sterilize the knife first.”

When he’s done so with every inch, he switches the lighter off and puts it back on the nightstand. Seokjin waves the knife around to cool it down.

A few minutes later, the blade has cooled down enough for Seokjin to be able to use it.

Seokjin moves the knife to the piece of skin above Hoseok navel. The younger sucks in a shaky breath in anticipation.

”Seokseok rather likes it when I play with this part, doesn’t he. Desperate slut.”

Seokjin drags Hoseok’s head back again and looks at him with narrowed eyes. “Bad slut. I told you not to move before we started, didn’t I.”

Sudden moments are dangerous when you play with knives. Seokjin is going to have to actually punish Hoseok.

Hoseok’s eyes grow huge and a whimper spills from his lips. But Seokjin doesn’t feel sorry for him. He should have listened.

Seokjin removes the knife and lays it back down on the nightstand. He gets off of the bed and disappears from the frame. His fans can hear him shuffle around and then he appears again with a cock ring. He sits down back on the bed and puts it on Hoseok.

Hoseok lets out a whimper but doesn’t protest. He even begs for more when Seokjin pushes two fingers inside his stretched hole.

Seokjin hooks his chin on Hoseok’s shoulder while he fucks him with his fingers. “Seokseok is not going to come but I will.”

When Seokjin adds another finger, Hoseok cries out and lowers his head. He bucks his hips backwards, desperate to be fucked.

Luckily for him, Seokjin doesn’t want to wait any longer either. He removes his fingers, puts on a condom and lines his dick up against the sub’s hole.

Hoseok falls forward when Seokjin pushes inside. The dom doesn’t grab for him, liking this new angle too much. He can drill Hoseok better into the mattress this way.

Loud moans and cries spill from Hoseok’s lips and unto the mattress as Seokjin has his way with Hoseok.

“Such a tight bitch. Only good for fucking,” Seokjin growls. He lays his hands on Hoseok’s back and presses down. The cuts rub against the duvet with every one of Seokjin’s trusts, driving the sub mad with pleasure.

Just like Seokjin knew would happen, Hoseok’s moans grow even louder. He arches his back, allowing Seokjin to go even deeper.

And then Seokjin is coming, spilling into the rubber wrapped around his dick. He makes sure to exaggerate his orgasm face for the camera a little bit. Hoseok sobs beneath him, sounding as desperate as ever.

When he’s come down, Seokjin pulls out. He gets rid of the condom before rolling Hoseok back on his back.

Instead he lifts Hoseok and takes him into his arms. He showers the younger’s face with kisses while he mutters compliments. “You were so good. Such a good sub. A perfect cumdump.”

Hoseok’s eyes become brighter and he’s smacking his lips. He’s coming back up.

Seokjin leans over him and reaches for the laptop. The last thing the fans see is Hoseok smiling doopily up at Seokjin.

Please do leave a comment/kudo if you liked the fic.