Please don’t take this as an actual guide. 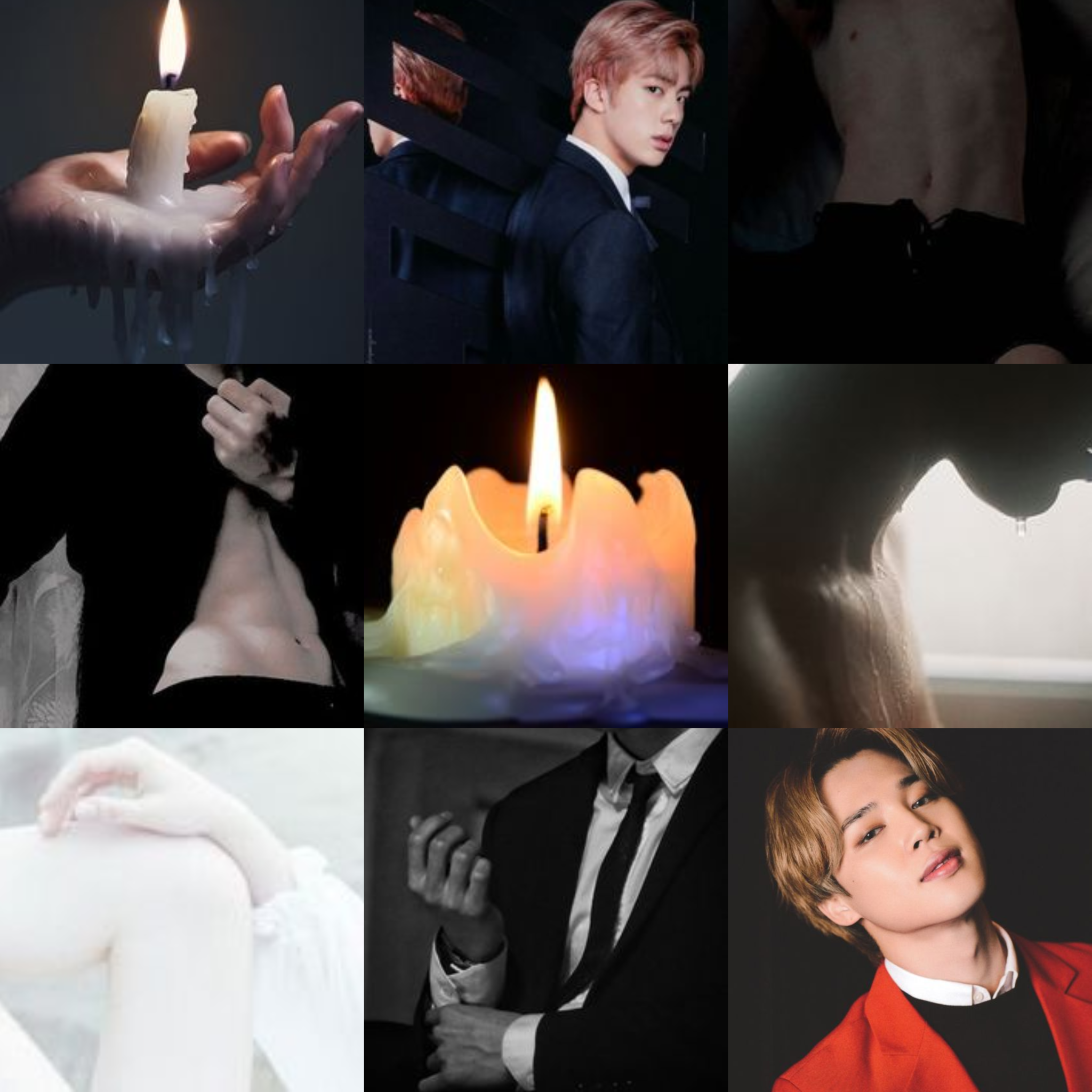 “Chim is joining us again today,” Seokjin announces to the camera with a smile. He has one hand on his roommate Jimin’s shoulder while he waves to his viewers with the other. “Say hi to Chim, everybody.”

The laptop chimes with all the incoming messages and Seokjin’s eyes wander down to read them.

“It appears they’ve missed you. Isn’t that nice,” Seokjin purs as he squeezes Jimin’s shoulder. The younger only nods, already well on his way into his submissive headspace. All Seokjin’s subs are when he decides to play with them on camera.

Seokjin had quite a few of them in the past but for the past few months, he’s only been playing with the two men he shares his apartment with. They want to play often enough. Hoseok does it for the money, Jimin because he doesn’t want to be left out.

The three roommates have grown closer, now they fuck each other on camera. Or at least, Hoseok and Seokjin and Jimin and Seokjin have. They get along even better and sometimes they even hang out as friends.

“You’ve missed them too, haven’t you,” Seokjin asks in a sultry voice as leans closer and softly bites in Jimin’s earlobe.

This only is Jimin’s third time on the cam show, even though he had told Seokjin he wanted in two months ago. Including his roommates feels special, if they’re on too often, it will feel less so.

Seokjin lets go of Jimin’s earlobe and turns back to the camera. “So, today we’re going to go a little darker. A little more painful.” Seokjin wiggles his eyebrows.

That’s another thing that his fans appreciate about him, his humor. Or more the lightness he brings to more intense scenes.

“Today, I’ll be using this,” Seokjin announces. He grabs for something on the nightstand, out of the camera’s few before pulling it into the frame.

The chat goes off once again when they see what Seokjin is holding. Like a good sub, Jimin keeps looking in front of him.

“My lonely hearts. I’m going to introduce Chim to the joys of wax play.”

Now it’s time to get serious. His fans love it when he acts silly before the scene actually begins but he’s not going to goof off during the scene itself. That would be irresponsible.

Messages follow each other up in rapid succession. Seokjin can’t really read them, but he has a feeling they’re positive.

He lets go of Jimin’s shoulder and reaches for the night stand once again, this time to grab the matches.

He moves back, as not to set Jimin’s beautiful hair on fire by accident and sets the candle in its holder down on the bed. He strikes a match and brings it to the whick. It bursts into flames. Seokjin quickly blows out the match and lays it down on the nightstand together with its box.

The nice smell of strawberry scented wax starts to fill the room as Seokjin moves closer again, candle in hand.

“Are you ready?” Seokjin asks, the candle hovering above the smaller man’s shoulder.

Jimin nods his head and Seokjin tilts the candle. The younger cries out as the hot liquid connects with his skin. He throws his head back, the back thumping against the older’s shoulder. “Master.”

“There’s a good boy. You’re doing so great,” Seokjin compliments him as he rubs his tummy. Jimin is the kind of sub who likes compliments. “Isn’t he, my lonely hearts?”

Ping after ping bursts from the laptop as Seokjin’s fans assure his roommate that he’s doing so good. That he looks so hot. That Seokjin is so lucky with a sub like him. Seokjin whispers the compliments into Jimin’s ear, who’s eyes have fallen shut.

Seokjin reaches behind him and puts the burning candle back down on the nightstand. He’s going to use it again in a bit.

With his now free hand, Seokjin reaches behind Jimin and presses a finger inside the younger’s dripping hole. He has prepped himself just before the life stream. His hole is all lose and wet. Seokjin can already press two fingers inside.

Jimin moans loudly as Seokjin spears him in his fingers. “Yeah? You like my fingers?” Seokjin asks in a low voice as he moves his fingers inside the younger man.

Jimin nods his head, arches his back so the viewers can see his leaking cock and flushed chest better.

“He feels really nice around my fingers, my lonely hearts. Tight but not so much that it hurts, for either of us.” This is another one of his trademarks, the attention to the body of his partner. It’s the reason why he does sessions on camera.

The hand on his tummy travels higher until it reaches where the wax has cooled on Jimin’s skin. Seokjin caresses the painful spot with soft fingers, making the smaller man hiss. Seokjin lowers his hand again, not wanting to overstimulation Jimin.

Seokjin adds another finger and Jimin whimpers at the stretch. A curse slips from his lips. It’s soft, pathetic. “Such a needy baby.”

”Please,” Jimin pleads in a soft voice that the camera doesn’t pick up.

“Chim wants my cock already. Should I give it to him? Or should I add more wax first.” Jimin lets out a whimper at the last option but he doesn’t use his safeword. So, the choice is up to the viewers.

And they decide they want to see Jimin suffer some more. They tell Seokjin to pick the candle back up and pour some more over Jimin. Seokjin does so, tilts the candle above the other’s shoulder. This time the cry is a little less loud.

Seokjin quickly puts the candle down and blows it out. Jimin’s dick is leaking like crazy when Seokjin plasters his chest to the younger’s back again.

Of the opinion that Jimin has waited long enough, Seokjin rolls a condom down his stiff length and presses the tip of his cock against Jimin’s entrance.

He glides in so easily and Jimin cries out so beautifully. Seokjin wraps his arms around Jimin’s waist and then starts pounding into the wet, tight hole.

Jimin keeps murmuring, “Huyng,” as his brain is fucked out of him. His dick is bouncing up and down for the viewers to see. And Seokjin keeps telling him how good he is.

Because he is. He feels so good and plaint around him. Taking everything that Seokjin is giving him. He doesn’t even protest when Seokjin drags his fingers over the wax covered parts of his chest.

After a few minutes, Seokjin’s arms starts to protest from having to hold Jimin up, so Seokjin presses him down. Face against the mattress, ass up in the air.

With this new angle, Seokjin can reach even deeper and fuck Jimin even harder. It doesn’t take long for the younger to become a moaning mess.

When Seokjin is close, he grabs Jimin’s dick, where it’s trapped between the mattress and Jimin’s tummy and wraps his fingers around the smaller length.

He jerks Jinin off while he pounds the younger’s delicious ass. If Jimin wanted, he could start his own show with that ass.

Seokjin pulls out and turns Jimin around. Most cam shows, would switch off now. But Seokjin’s is different. He’s going to show he’s viewers how he’s going to take care of his sub too.

“When you use wax, you should have a bowl of warm and cold water ready,” Seokjin tells his viewers as he pulls off the condom. He ties it off.

He takes it with him when he shuffles towards the bowls of water. He lays it down on the nightstand before leaning down and grabbing the washcloth that’s submerged in the warm water. He wrings it out before taking it with him to Jimin’s side.

With very careful hands, Seokjin lays the warm washcloth on the oldest wax stain. “You should use the warm water first. We need to make the wax more meliable so we can pull it off.

When Seokjin deems the wax soft enough, he removes the washcloth and lays it down on the bed. Jimin lets out a groan when Seokjin peels the wax off. It makes a squelching sound.

Seokjin does the same thing with the wax stain on Jimin’s other shoulder.

”Now you need the cold washcloth.”

Seokjin goes back to the bowls and dumps the warm washcloth back in one of them. Next, he grabs the cold washcloth. Seokjin hisses at the coldness of the water when he wrings it out.

Jimin does so as well, when Seokjin careful puts the washcloth on the cold skin. “You want the skin to calm down so the redness won’t be too bad,” Seokjin explains.

Though it had hurt, Jimin looks blissed out. Seokjin’s fans can’t see but he can. Which feels special for some reason.

“Keep it on for about three minutes and then you’re good.” Seokjin looks up, into the camera laptop. “That’s it for today. Hope you all enjoyed it, my lonely hearts. Until next time.”

Which is all the viewers get before the camera is switched off.