Written for Daleween 2020. York and the MT Teens go to a haunted house. Predictably when one of the most scary things recently in the blaseball cosmology has been a peanut deity, and one of them has been Shelled, things go a little sideways.

"What?" York asked, slinging his duffel bag over his shoulder. "Were you talking to me, or making promo videos again?"

Vapor playfully shoved him as they were walking. "Jesús told me the college is doing a block party for Halloween! There's going to be a haunted house and everything. You should come with us. "

"Oh uh. Thanks for the invite..." York hesitated.

"Back..." York stopped himself before he could say 'home'. "On the islands, my moms and I used to go trick or treating early, then we'd come home and 'gomi would roast pumpkin seeds and make hot apple cider and we'd watch a spooky movie together. I've never really gone out for a party or anything.

"Gotta start sometime! It'll be good for you to make more friends around here."

"And besides, I don't have a costume, and this thing is like two days away. I don't even know what I'd dress up as."  He pulled the knit cap down further over the top of his ears.

"Oh come on, you didn't read comics as a kid? Didn't have a favorite hero you looked up to?"

"So you're coming then!" Vapor plowed through York's thoughts with his patter. "The thing starts at six, so we'll all meet at Ziwa's apartment at like five and get ready.  You should see Jesús' costumes anyway, dude goes all out."

York pulled out his phone and dashed off a text: Hey Auntie? I need a favor...

The sky was a bright blue that belied the crisp fall air as York wandered up the stairs to Ziwa's apartment on Saturday afternoon. He barely had a chance to raise his knuckles to the door before they swung it open, a broad smile splitting their face. "York! Come on in! We're- I'm so glad to have you here. Vapor and Jesús are already in the bedroom, go on ahead."

Vapor stuck his head out of a door down the narrow hallway. "York! You came! I mean-- you're here!"

"Wouldn't miss it," he replied, feeling a grin lifting the side of his mouth, holding up his bag. "I might need a little help with my costume though. Can one of you help with my hair while I do my makeup?"

Vapor pulled him into the bedroom with a laugh. "Of course. Jesús, can you help?"

"Yeah, sit on this side," he pointed at the rumpled sheets and hastily pulled up blankets on half of the bed. "What do you need?"

"There's a curling iron in here, can you help me get it curled and pulled back?"

"Mm," Jesús made a noise in the affirmative, taking the bag from him and digging through to find what he needed.

Vapor peered in curiously. "Wait, you're going as JT? That's so cool!”

“Thanks,” York laughed. “Is Buddy coming with us tonight?”

“Nah, I think people can tell who I am without him.”  Buddy interjected with a gurgling whine of disappointment and Vapor ruffled his head affectionately. “Besides, dude. I’ll bring you plenty of Sclooby Snacks tonight, ‘kay? I don’t want you to get scared or lost or anything out there.” 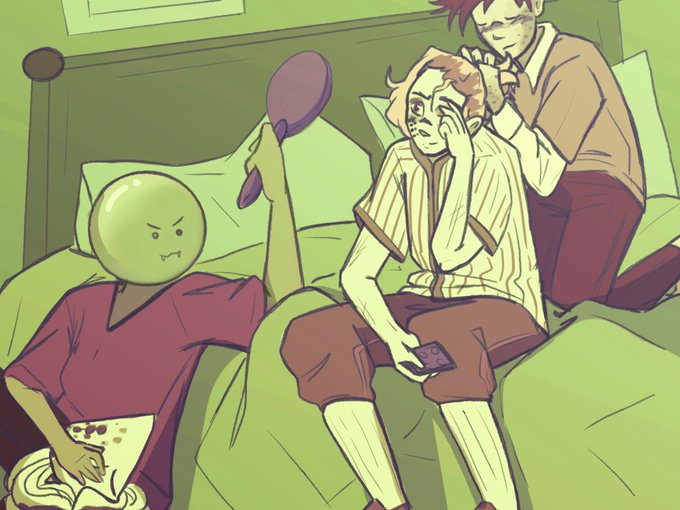 Vapor brandished the phone at York again, narrating. "And here we have the young blaseball prodigy himself, York Silk, in his first EVER haunted house! Can I get some ploggers in the chat for young York and his badass Jessica Telephone costume?"

"C'mon, not everything has to be content! The three people in your Twlitch chat don't need to see this- say hi to your mom for me by the way," York shoved Vapor's phone out of his face and pushed through the streamers into the next room. 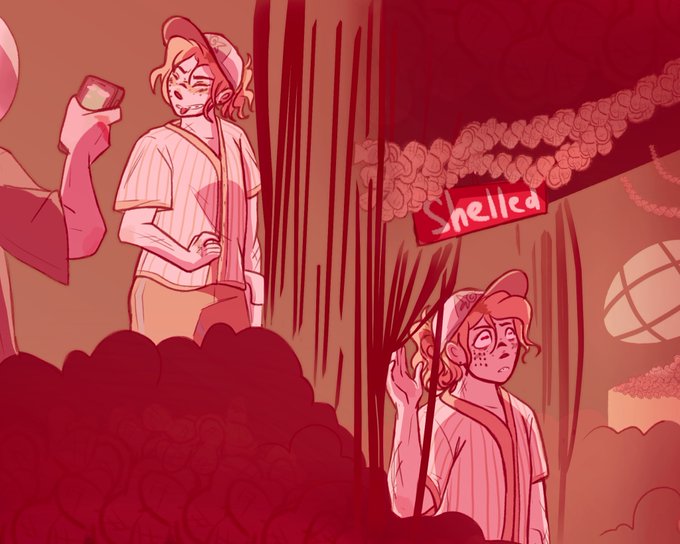 At first, he wasn't sure what he was looking at between the red party lightbulbs and the fog machine that was stinging his nose, then the shadows coalesced into shapes, and he nearly retched. Garlands of peanut shells were strung through the room, and a crudely painted "SHELLED" sign hung crookedly over the door. On the far wall, the peanut itself was silhouetted, and--

A figure in a torn blaseball uniform lurched toward him from the side, gory makeup dribbling down one side of his face. "Hail the Shelled One," he intoned, waving a broken bat.

York felt his heart seize for a second, then all he could do was run. Blindly, he stumbled through the last two rooms of the frat house, only stopping when the heat and acrid smoke from the fog machines gave way to the cold night air. York sat heavily on the steps, head between his knees, taking deep, shuddering breaths. His stomach churned, and he tasted bile at the back of his throat, having to quickly straighten up to try to keep things in place. Hot tears pricked behind his eyelids, and he scrubbed his eyes angrily with a fist. 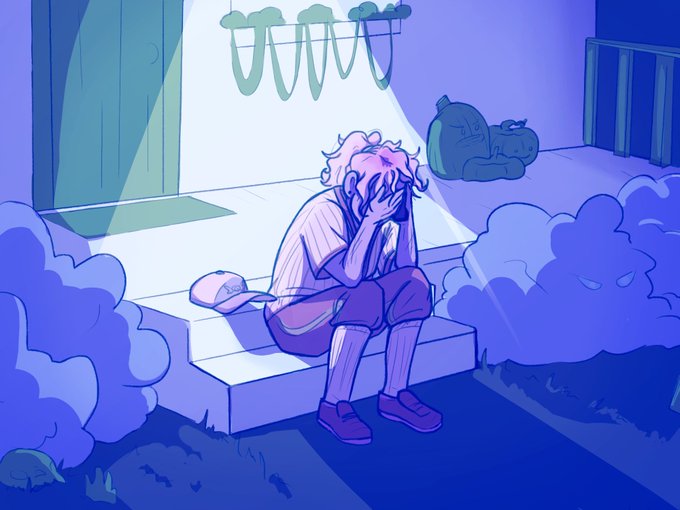 It was just a stupid haunted house, he told himself, a haunted house with a stupid room that... An invisible fist clenched around his throat, and he pulled out his phone, thumb swiping over the numbers by memory.

The line connected on the first ring. "York?"

He sucked in air, trying to get his breath to answer. It came out as a sob.

"You don't sound okay. What happened?"

"It was just a stupid room in this haunted house, but there were..." he swallowed past the lump in his throat. "Shells. Like they were worshipping it."

He pressed on. "I needed to call someone who would understand and it couldn't be 'gomi because she'd just fly out here and..." his voice shook. "And besides, she wasn't there, when we all got..."

"Taken. I know. Do you want me to come out? Do you need someone there? Are you alone?"

York was suddenly aware that the line to enter the house was starting to curve back up along the block and no one had come out behind him for a long time. "Auntie Jess? I should go."

York swallowed again and took stock. Was he all right? His breathing had slowed. He was still a lot angry, and a little sick, but he could stand, he thought, and he needed to go back in there and find his teammates. "No... but I think I will be."

"You too... oh and Imighthavegottenmascaraononeofyourbattinggloves okay love you, bye!"

York hung up and stood up from the steps, brushing himself off, and going back through the doorway into the black plastic-draped rooms. He backtracked toward the peanut room, trying to take slow, calm breaths. As he approached, he heard raised voices and shouting, and he peeked back through the streamers.

"--the FUCK you all were thinking glorifying this thing! Don't you know people got hurt! Don't you know players have DIED?" the normally quiet, reserved Jesús was up in the frat kid's face, Vapor standing rigidly by his side, phone somehow mercifully absent.

York had to force himself to step back in among the garlands of peanut shells and the swirling fog, but once he had taken one step, the next was easier. He put a hand on Jesús' shoulder. "Hey. Hey! I'm okay," he lied.

"York, dude! We were so worried!" Vapor's normally joking tone was low and intense.

"I just... had a bad reaction for a minute." York pushed past Jesús, who had fallen silent at his return, addressing the college kid in the torn blaseball uniform, managing to keep most of the shake out of his voice. "So, what, you thought this would be FUNNY ? You thought, oh, no, we don't need a dude with a plastic chainsaw this year, we'll just make light out of people's very real trauma?! People didn't come back from those games. People I knew. People on my team. People I was--" his voice broke again, but he pressed on, "friends with. And you think they're something you can use for a laugh. Fuck you." He shoved the guy back against the wall and spun on the heel of his borrowed cleats. "Come on. Let's get out of here."

Wordlessly, Vapor and Jesús followed him through the last rooms of the haunted house and into the crisp night air.

Vapor was the first to break the silence between them. "You... okay?"

York kept on walking down the sidewalk. "Not uh. Not exactly. I'm sorry, I think I should call it a night."

Jesús caught up with him, and uncharacteristically slung an arm around his shoulders. "No, no, it's okay. We'll head back to Ziwa's with you so you can grab your stuff. I think I'm about ready to turn in after that anyway."

Vapor piped in, trying to hurry his pace to catch up while he was sending a text. "Do you wanna like... stop and grab something to eat on the way?"

They turned up the side street away from campus, fallen leaves crunching underfoot as they walked a few minutes in silence.

"Are you sure?" Vapor broke York's contemplation again. "I know I get shaky after I get all emotional and stuff."

"Really, I'm fine!" York tried not to snap. "I'm just a little tired right now, and I should call my moms anyway."

They were on the steps of the apartment building. Vapor made a show of patting his pockets. "Shit, I must have left my phone back at the haunted house, we should go--"

"It's in your hand!" He was unable to contain his irritation. "What is with you tonight?" York pushed past Vapor and opened the door of Ziwa’s apartment.

The shrill of a smoke alarm screamed through the air as Ziwa stood awkwardly in the entry halfway through typing a text message, their eyes widening as they took in the trio. "York! You're home uh... early!" 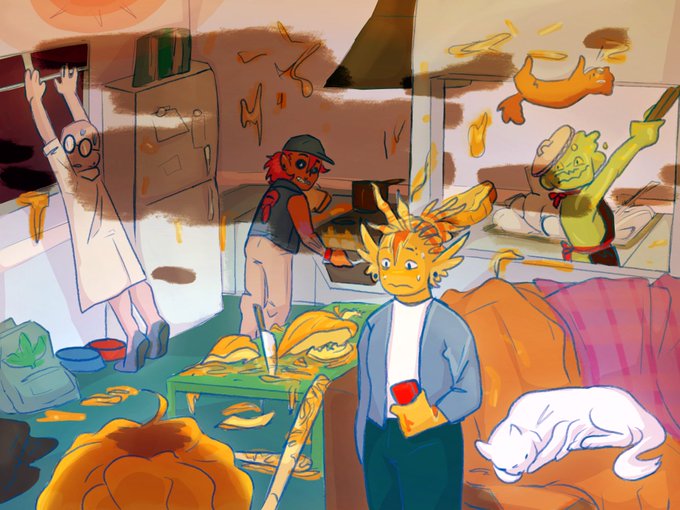 He paused right inside the door and looked around- most of the team was there, some clustered in the living room debating over a pile of DVDs, others trying to fan smoke out of the tiny kitchen window. The remains of a pumpkin were smashed and splattered over most of the apartment, and a pot of what faintly smelled like cider through all the smoke was beginning to boil over on the stove.

"We know it's not home, but we thought we could maybe try to do something like it. I called Nagomi for her recipes, but I think I must have written something down wrong. Sorry if it's not right..."

York’s throat tightened, and he found himself close to tears for the second time that night. "It's absolutely perfect," he said firmly.

Thanks for reading! Happy belated Daleween! 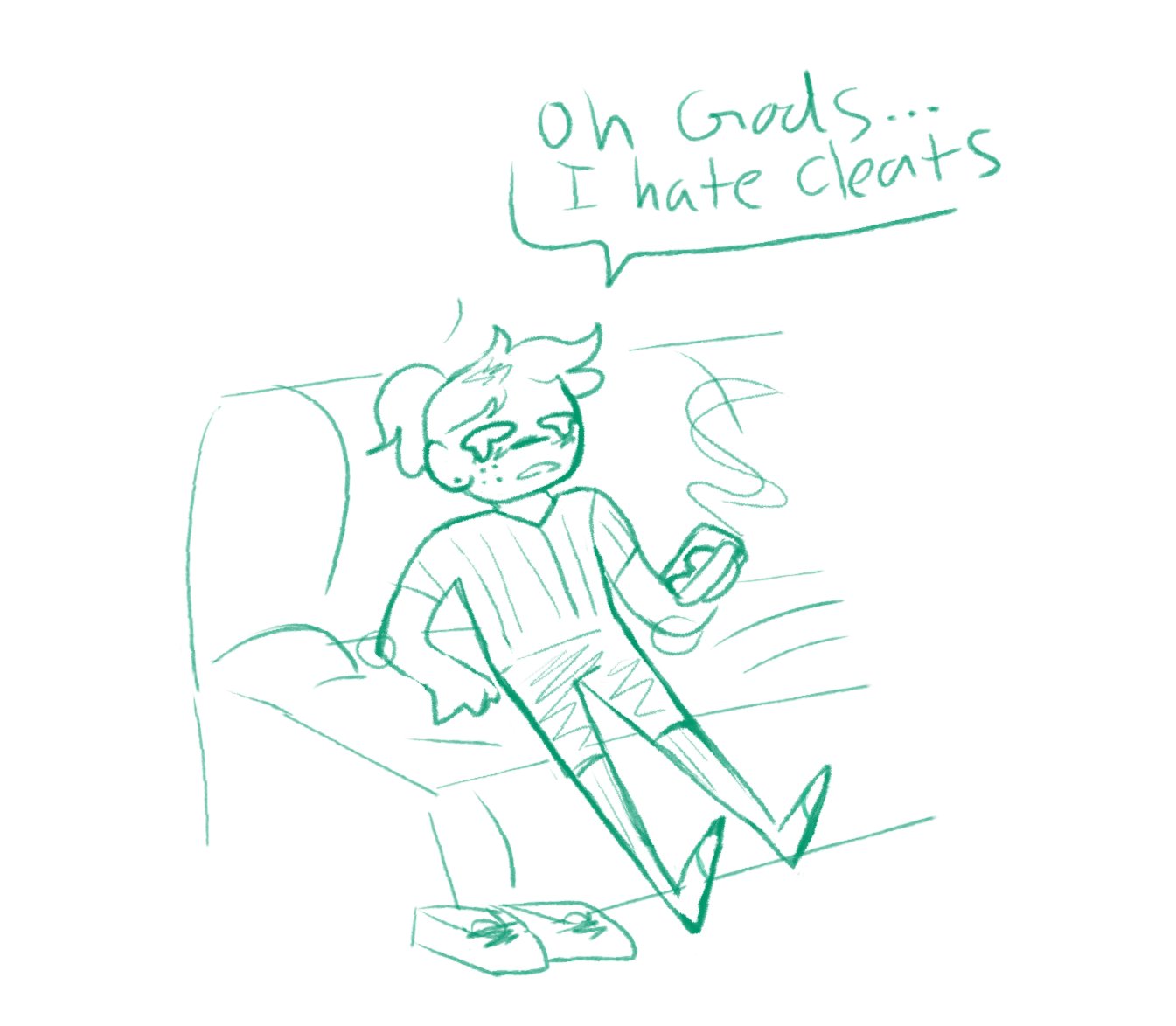