[Podfic] and one epic road trip too

(as it turns out, the small series of road trips itself is, quite unfairly, not very consequential to this story.)

Recorded for ITPE 2020 as a gift for steelinstories. I hope you enjoy it! I said in the other not!fic that I am not a writer, but this did spark multiple other ideas in my brain so oops. 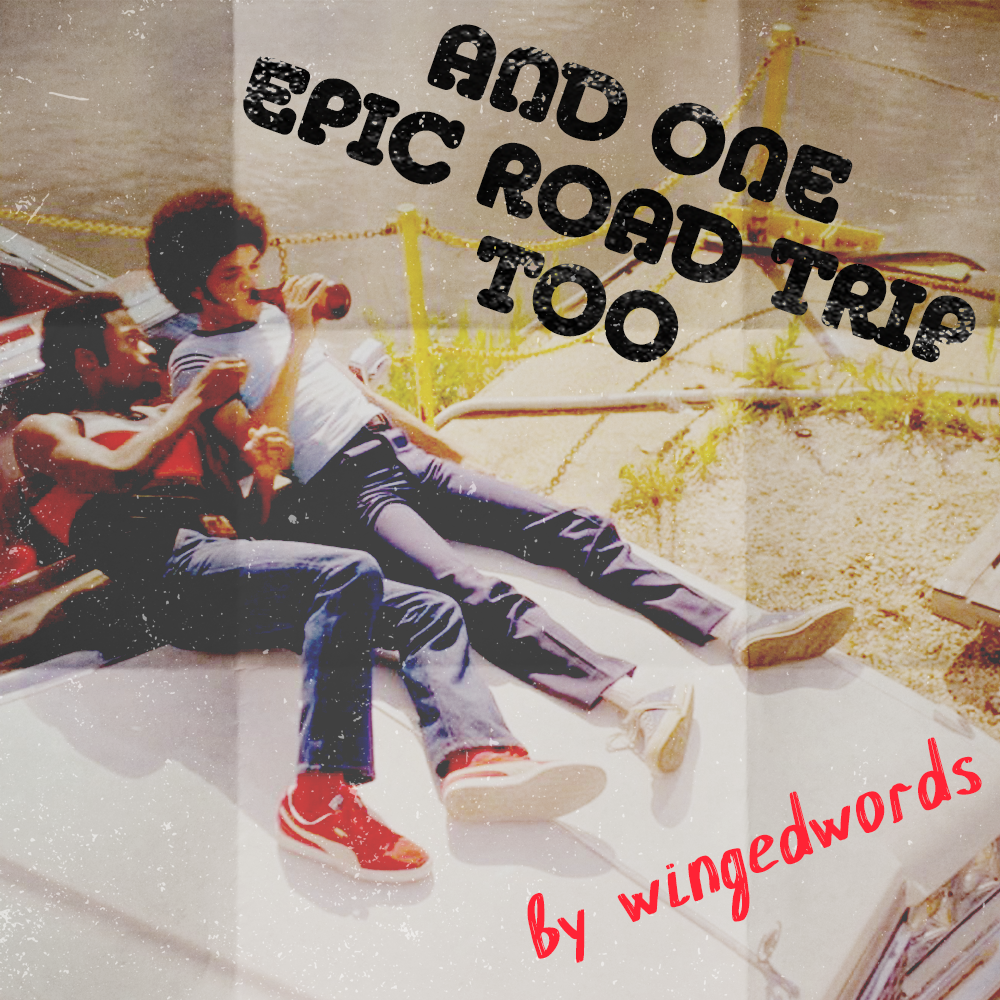 and one epic road trip too

written and read by wingedwords

A not-fic sequel to the prelude to a small series of road trips.

(as it turns out, the small series of road trips itself is, quite unfairly, not very consequential to this story.)

There are long, long train rides between New Haven and the Bronx, back and forth, until finally Zeke's first year is over.

...How does this lead to a road trip?

You know, I don't know how this leads to a road trip, I just know that it does.

So this wouldn't be a road trip story without a destination. And that's where Mylene comes back into the picture. Zeke and her haven't really talked that much since he left and since she left, but they were never really willing to admit that it was over.

So, in theory, Zeke was going to drive across the country to LA when his first year is over, and spend the summer together. But he honestly doesn't really think that he's gonna go.

And that "not yet" gets repeated over and over and over. Through midterms. Through finals. And then it's time to go and he has not told anyone that he isn't planning on going.

And at the same time, Shao also wants him to stay. You know, he feels the same way and it's been a year of long train rides back and forth. And neither of them have said it. Shao still thinks that Zeke is leaving him to go to LA to be with Mylene. But he's not going to be the one to ask him to stay. He's not going to admit how much he'll miss Zeke but he's also not willing to give him up.

So instead, he just sort of... inserts himself into the plan. "Zeke is going to LA in the summer" has become "Zeke and Shao are going to LA for the summer."

But he doesn't really tell Zeke that that's the plan.

But, so, what it is, is that Shao shows up right before Zeke is supposed to leave and before Zeke can open his mouth to admit he's not going, Shao - just pure bravado - says "All right, what time do we leave?"

And Zeke starts to realize that he apparently doesn't need to say that he wants to stay with Shao because Shao's coming with him. He has the length of the entire United States to figure out what he's going to do with Mylene.

And he's really into that idea. Of driving across the entire continental US with Shao. So... they start driving.

Also cue some big questions as to what happens when they get there.

Spoiler alert, I think that it ends with the three of them together with a long metaphorical road of how they get there- I'm getting off track. Honestly, I might cut this bit.

I think I've decided how they do their road trip.

It's way too much to drive all at once. You can't drive across the United States in one go. And neither of them really have getting there as a big priority.

So they decide to stop by there. They couch surf a little bit. They go to the show. They get to know some people. Maybe they perform. And just as they're about to leave - because they told Mylene that they're coming, and they told each other that they're going - somebody mentions-

Hold on, I gotta look up a map of the United States.

After Cleveland, they stop in Detroit. After Detroit, they stop in Chicago. Then it's down to St. Louis, and to Kansas City. At this point, they're moving west basically out of plausible deniability. But the further west they get, the fewer cities, and the fewer people, the fewer shows.

So finally, finally, they have a heart to heart. It's not as clear cut as maybe either of them wanted it to be. Because though things with Mylene aren't the same as they were, there's still a reason that Zeke is driving across the United States. And it's not just guilt. It is not just a fear of messing with the status quo.

For so long, it has been Mylene. It's a little bit always going to be Mylene. And Zeke thinks, this is it. He can't choose. So Shao was gonna choose for him. But Shao doesn't choose for him. He doesn't make him choose at all.

So they go to LA.

I could go into more detail as to what happens next. But that wouldn't really be a road trip story anymore. I guess they ride off into the sunset? I don't fucking know.

The end. (a second time)

Honestly the least fleshed out thing about this is what do I mean by "throwing a show"? I know nothing about what it's like to be a musician and I think that is very clear.

For additional consideration, I propose: Shao stays in LA with Mylene when Zeke has to return to Yale, because I think that Zeke is really the vertex of their relationship, and I love that "we're both in a serious committed relationship with the same person, but neither of us know what we are to each other" dynamic. A little bit of "and they were roommates" with a splash of "pining from afar" Zeke.

DLJ and yeswayappianway as well as 2 guests left kudos on this work!