got this prompt from a tweet: a student realized my husband and i were a couple after recognizing the same cats zoom bomb both our classes. i find this simultaneously adorable and a bit dystopian. (link to the tweet here -> https://ibb.co/pj4pkX7)

so malex are cat dads

“Michael, can you make sure Ozzy isn’t in the room when I am helping with this class?” Alex yelled out of the bedroom as he got ready for the day. A week ago, he had no plans on getting up at 8 am for his husband’s college class he was teaching to a handful of students, but Michael informed him that the regular IT guy at the college wasn’t feeling well, so Alex offered his services.

The former airman turned IT consultant was just finishing rolling up his pant leg around his stump, when he could hear a soft meow outside the bedroom door. He paused, but couldn’t stop himself from grabbing his crutch and walking towards the door. He looked down and came face to face with the cat that became his best friend. Well best feline friend anyway.

He got Ozzy soon after he married Michael, a little over two years ago. They were in no way ready to have any children at that point, but that didn’t stop Alex from grabbing Michael’s hand and dragging him into a shelter they were passing on the street on the way home from an afternoon lunch date between Michael’s classes.

Michael knew Alex was a goner for the small animal as soon as the cat slowly walked up to him in the cage. Alex looked up at his husband with sad eyes and Michael sighed before nodding. Alex smiled, as he went to talk with one of the workers in the shelter, not noticing another feline clumsily making it’s way towards Michael from it’s own cage. The curly haired alien heard a loud meow from the nearby cage and turned to look to see an orange cat looking at him with a dopey look on it’s face like it just had the world’s best catnip.

He took notice of Alex walking towards him with a worker and grinned.

“Hey Alex, how do you feel about two cats?”

Alex was quickly brought out of the memory by Ozzy purring and leaning against his left leg. He smirked and bent down, lifting him up.

“Someone doesn’t want me to get work done today,” he murmured. The animal looked up at him with a “ya think?” expression and he let out a laugh.

“Yeah, you definitely don’t want me to work today.” Alex took notice of the quiet and peered his head out of the doorway, noticing Michael was at the kitchen counter with Mika on his shoulder, trying to take a bite out of his breakfast.

“Mika, what have I told you?” Michael reprimanded the cat, before she jumped off his back and made her way towards Alex and Ozzy. Alex let Ozzy down just as the cats started licking each other before both of them went towards their individual food bowls.

As Alex started to make himself coffee, he turned towards Michael.

“So, how many students do you have to teach today?”

Michael grabbed his piece of toast, that luckily Mika did not get a hold of, and took a huge bite.

Making the wise choice of not wanting to be at the end of Alex’s glare when he talked with his mouth full, he chewed and swallowed before answering.

“This is my smallest class, so only six. So it should be easy for you to deal with any IT issues that come up with there not being many kids.” Alex nodded, taking a sip of his coffee before sitting across from Michael at the kitchen island. Before Michael could take another bite of his breakfast, Alex reached across and grabbed his hand, much to Michael’s surprise. Even in their home away from anyone, Alex was very shy about showing random signs of affection.

Michael squeezed his hand and raised an eyebrow, “What?”

“I love you,” Alex stated, looking at Michael with the same look on his face he had on their wedding day.

Michael smirked, before leaning over to kiss Alex on the forehead, before moving down to kiss him on the lips.

“I love you too. Now let’s eat and then you get that cute butt up, I have a class to teach.”

As Alex watched Michael teach from his office, while he was in their bedroom at his own desk, he couldn’t help but stare at his husband in awe. Michael was a certified genius and sometimes Alex couldn’t believe how lucky he was that they worked things out a few years prior and that he got to be with this man for the rest of his life. Alex could watch Michael talk about what he loved forever. He was grateful that he now had that opportunity.

Alex heard a scuffle outside his door and turned in his chair carefully, before grabbing his crutch. Walking over to the door, he opened it and spotted Ozzy looking up at him with an expression that he wanted to play. Mika was standing next to him, looking just as eager to play. Michael always joked that Ozzy seemed more like a dog in a cat’s body, and Alex could definitely see how now. Mika always followed Ozzy around, so it was no wonder they were both outside his door. Alex thought that Ozzy and Mika were too busy at their individual scratching posts to notice their missing human parents, but the cats were too smart for their own good and clearly had other ideas.

Alex had his own video portion of the Zoom window turned off until they needed him, but as soon as he sat back down with Ozzy now in his lap and Mika making herself comfortable on his shoulder, Michael was requesting his assistance. As soon as his video started, Ozzy decided he needed to jump onto the keyboard.

“Um Alex?” Michael’s voice came through the computer, but the screen was blocked by the small feline.

The chat box for the class started going crazy.

Marie Stephens: omg there’s another one on his shoulder!

Alex cleared his throat, “Sorry guys! My cat decided he wanted to learn how to type.” Mika jumped off his shoulder, right as he went to set Ozzy on the floor to let him roam free. He turned around to fix whatever issue they were having with the Zoom, feeling his face flush with embarrassment.

As Michael explained the problem, Alex nodded. “I should be able to fix this in 5 minutes or so.”

When Alex went about fixing the problem, he took notice through the small video window that Ozzy and Mika had gotten into Michael’s office, and were currently making themselves comfortable on Michael’s lap, leaning forward as Michael tried to not let them touch his keyboard.

He noticed fast comments flashing by in the chat section again, before he smirked.

Samantha Harris: Looks like it. Hey, wait is Professor Guerin with this IT guy?!

Alex could hear Michael chuckling, before he spoke up.

“Guys, you do realize we can see the chat right?”

“All fixed. And yes, Professor Guerin is my husband.” The chat started going crazy again before he continued, “Now pay attention, he’s really smart and knows what he’s talking about when it comes to this stuff.”

He winked at Michael through the Zoom before Michael smiled at him, with the same dopey grin that Mika had when she saw Michael for the first time.

He knew he’d get lucky tonight.

Their cats really were the greatest. If the rest of the chat was talking about how cute they were instead of on what Michael was teaching, well who could blame them?

Ozzy and Mika were getting treats tonight. 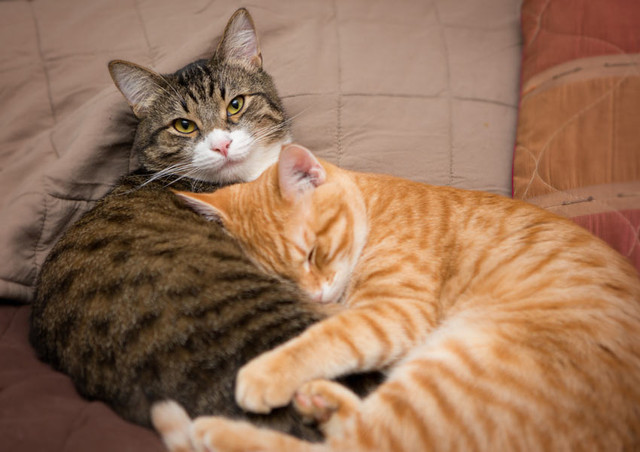