Gentle and Surly; Fierce and Brave

A zombie apocalypse is where your true personality shows. This is the case for Sansa, Arya, Sandor and Gendry. Their true colours shine through and it’s for the better. However, there are some survivors who you do not want to come across in the zombie apocalypse.

This was made for the Zombie Big Bang 2020. Thank you to the beta and my fear buddy for this fic.

Please go and kudos this awesome art, that was created by Goblin (Undici)
https://archiveofourown.org/works/26915674 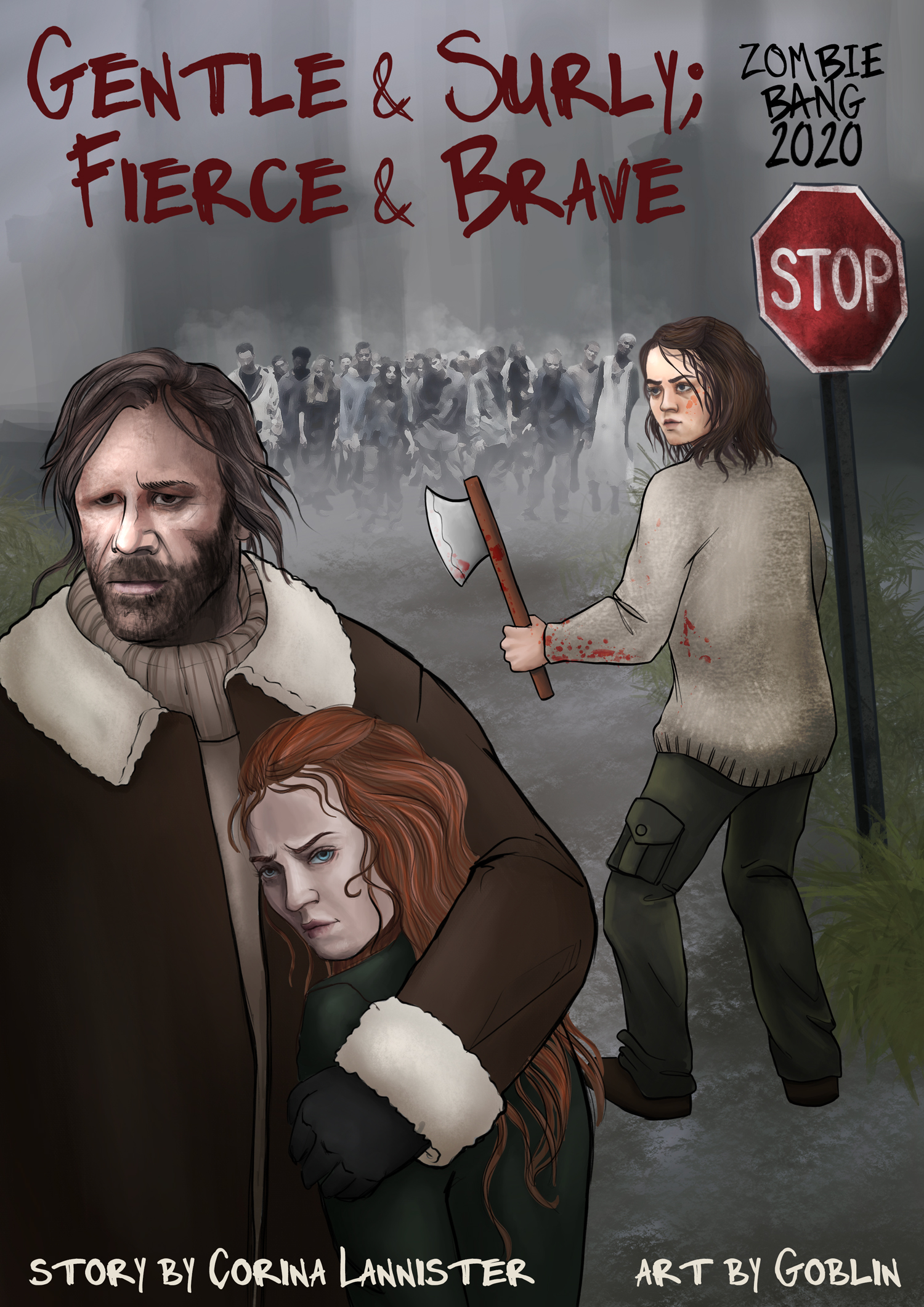 Normal. There was no definition of this word anymore for him. Yet, at this moment, he could almost say that things were ‘normal’. Arya, Sansa and him were sitting around a small fire with several cars providing a limited amount of protection from wind, walkers and humans alike. It was almost as if they had gone camping and were sitting around a bonfire with marshmallows. Though in this case, there were no tents, no marshmallows, but there was a highrise building which was unfinished with scaffolding in the upper layers. The cars around them looked like they hadn’t moved for some time. Most were vandalised, with broken windows or scratched doors. But, for him this felt like home. Arya was heating a can of spaghetti hoops over the fire, Sansa was sewing together scraps of material to make a blanket, winter was coming and they would need to find clothes befitting. They would no longer be able to sit outside. They would have to venture into the buildings, where the dead were.

Eddard knew that Arya was more suited to the world now than Sansa was. Arya even went fencing before this all began, not the typical female hobby but he supported her, even when she would come home with bruises from it. She never gave up. She came home with fewer bruises every time, proving that she was gaining more skill. It filled his heart with joy that Arya had found something just for her. Somewhere where she could fit in. Sansa, on the other hand, he worried about more than he should have. She was too trusting and gentle. Pretty, too, which was what worried him. The dead did not discriminate, true, but the living, they were another matter. More dangerous than the dead. His family knew that better than anyone. He knew Sansa blamed herself for what happened to Catelyn and her brothers.

“Father, what are we going to do?” Sansa asked him.

“We have to keep going. We have to survive and not lose ourselves along the way.”

Arya cut into the conversation. “How are we going to do that? There’s only three of us now. Sansa can’t even fight."

“Arya!” Eddard admonished his daughter, “Be nice to your sister. There is more to this world than just being a good fighter.” His word was final on the subject.

Silence reigned over their makeshift camp. The only sounds were the wind and some wild birds overhead, and the occasional crackle of the fire. The smell of their measly portion of food started to waft around them, one third of a can for each of them.

“I’m proud of you both,” Eddard said to his daughters when their food was ready. “Sansa and Arya, I’m proud to have both of you as my daughters.”

Arya only frowned and glared into her portion of food, yet Sansa beamed back at him. When he saw them glance at each other and Arya’s expression ease up, he smiled. This was how it should be.

Sansa’s eyes widened before she stood up so quickly that she almost fell over backwards, her remaining food splattering to the floor, “Behind you,” she shouted.

There was a frenzy of movement. He stood, bringing Ice up, and Arya launched past him at breakneck speed. Her yell when she brought down the walker behind him was shrill but she got the job done.

Eddard put his hand on her shoulder. “Well done, little wolf. There was only one, I could have handled it,”

Only it wasn’t done. They were drawn to noise and a few stumbled round the corner. Followed by another. Then, banging started on the windows of the ground floor of the building they were sitting next to.

Eddard pushed one of the walkers back and it fell to the floor, bringing another walker down with it. The glass cracked on the window as more walkers were drawn to the noise. When he looked up, he couldn’t see the road anymore due to the sheer volume of walkers coming round the corner. Eddard watched as Arya took out two walkers in quick succession. Her strikes, precise and true.

The sound of glass breaking drew his attention. There was no way out of this for them all. There were far more walkers than he had ever seen in one place. One word came to his mind. A horde.

His hand tugged Arya away from the crowd of walkers from the road and he shoved her towards Sansa, who was gathering up their belongings.

“Arya, take your sister and get out of here. Now. Protect each other.”

Eddard looked at their faces, committing them to memory.

“I’m not leaving you,” Arya all but shouted at her father.

The walkers were stumbling out of the shop now. Towards Sansa, who had her back turned. He moved towards her and pushed her out the way and into her sister.

“Go now, both of you,” he shouted. It was Sansa who pulled her sister away from a walker who had gotten too close to them. Eddard couldn’t see that they had evaded all the other walkers for more walkers appeared between them and him, obscuring his vision.

Eddard felt pain when the first walker ripped into his skin. There was no hesitation, the bite was in his forearm which he had stretched out pushing one of his daughters away from the approaching zombies. He took a few seconds to drive his knife into the walker's head, but it was too late for him; he had been bitten. He would change. Staring down at the wound he saw the mess that used to be his skin, the blood flowing out of it and running down his wrist to drip from his fingers. Red spots were littering the ground of the alley. The few seconds he took to dispatch that walker, look down at the state of his arm, and then glance to the floor was all it took for him to be surrounded. What followed was walkers grabbing onto whatever part of him was closest, no preference shown for any particular part of him. They attacked, grabbing and biting his arms, his legs, whatever was within reach. It was all the same to them, he was meat, and that was it.

He tried fighting for as long as he could, but it was to no avail. He had no chance. The knife slipped from his hand when he no longer had the strength to wield it. Ice, he had called it. It had been with him since the beginning.

In the end his eyes were searching for the last of his remaining family. He found Arya but not Sansa. His fierce little wolf was up on the fire escape, looking on in horror at what was happening, it must have taken strength and agility to even get up there due to the gap between the ladder and the floor. She was making a lot of noise, catching the attention of the walkers below. They were swarming underneath her, pawing up the wall. Harmlessly, they could never reach her, and he had never seen any of them climb a ladder before. They weren’t that smart. They just followed noise...and each other. That was what had made them dangerous.

When he could stand no longer, and was brought to his knees, the walkers descended upon him. With them surrounding him, he could no longer see Arya, but perhaps that was a good thing, for it meant that she couldn't see him either, and surely she did not need to see his death. Eddard could hear screams but couldn’t tell if they were his own or Arya’s. However, even if she couldn't see, he was sure she knew what was happening. No doubt she could hear his screams and they would haunt her.

For him there was no more pain. He was losing feeling throughout his body, losing his senses. His fight long since had left him. As he sunk to the ground he was dimly aware of something digging into his back. It was Ice. He had wanted to die with his weapon in hand, but he would settle for dying to save his daughters.

His last thought was satisfaction that Arya was looking out for her sister. She was trying to draw most of the snarling horde towards her, trying to get them to stay there instead of wandering to where Sansa was. He hoped they both got out, got somewhere safe.

Eddard’s end gave his daughters the opportunity to live. He clung to this thought as he died, and it made him smile, a smile etched on his face for eternity when he took his last breath.