Jay Jay the Jet Plane is a horrible show - an essay

It is a well known fact that not all children’s shows are child friendly. Take Teletubbies, for example. That is the stuff of nightmares. In this essay, I would like to point out the fact that the mostly unknown television show, Jay Jay the Jet Plane, is a god awful series that deserves to burn in the fiery depths of hell.

This essay was originally written on May 30, 2019 and has been uploaded here in order to spread the word.

imagine thinking jay jay is a good show in 2020

It is a well known fact that not all children’s shows are child friendly. Take Teletubbies, for example. That is the stuff of nightmares. In this essay, I would like to point out the fact that the mostly unknown television show, Jay Jay the Jet Plane, is a god awful series that deserves to burn in the fiery depths of hell.

The most iconic part of the show about planes and helicopters would definitely be the designs of the characters. However, “iconic” doesn’t necessarily mean “good.” What do the characters look like, you may ask? Imagine a regular plane shrunk down to fit in a car garage. Then take that shrunken plane, and imagine a child’s - no, baby’s - face on the nose. In the words of John Doe, an extremely credible source, he says, “ It succccccs pp!” This quotation is entirely accurate, as shown below. 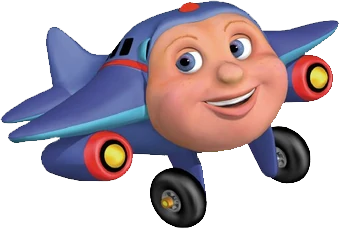 Another known part of the show is its religious undertones. While I agree that it’s fine for a show to be religious, the fact that the writers make edits to the show for the sake of Christian values is pretty cringeworthy. The quote below is from the narrator of the series, including the original version and the edited one.

“As much as Jay Jay loved the wild ride, he still missed talking to his big, best buddy. But Big Jake didn’t know that, he thought that they were having the time of their lives.”

“Jay Jay loved the ride, but he still missed talking to his big, best buddy. And that made him think how much God must miss it too, when Jay Jay doesn’t have time to talk with him.”

In the quotes above, you see that the Christian edit doesn’t even mention Big Jake, who is another ugly contortion of an airplane. Some other edits include the censorship of the word “wish” and “gosh” “golly” or “gee.” Honestly, it’s just plain laughable.

Even the show’s animation sucks. It’s plain as day to see how much of a low budget there was for making the show. In fact, if you look closely, as Jay Jay’s head moves, his wings seem to fold inward. The animators lucked out - airplane wings don’t move, so they could just move the characters themselves forwards or backwards depending on the situation. Animation isn’t the only thing the show has. A live-action woman appears every now and then, horribly green screen-edited into the show. Absolutely disgusting.

And now for the part you’ve all been waiting for. The story. Arguably, story is the most important part of any form of media. However, in the case of Jay Jay the Jet Plane, the plot is a leading factor in the contribution of the show’s downfall. Instead of teaching children educational values in life, this one caters more towards, again, religion. For the first episode of Jay Jay, Snuffy, a green plane with a deformed mouse face, sucks at playing hide and seek because he constantly farts smoke (which is disguised as “skywriting”). Snuffy’s problem with his smoke production ruining his chances of playing hide and seek is the driving force of the episode. Things only get worse (and cringier) when Big Jake, the most pedophilic plane I have ever seen, comes to the aid of Jay Jay and his friends to help out Snuffy. At the end of the episode, Snuffy is deemed special due to his ability to leave smoke trails that spell out words. Beautiful. Wonderful ending. Cried at the end every time. Congratulations show writers, you wasted my time and I learned absolutely nothing (from a child’s standards).

In conclusion, Jay Jay the Jet Plane is a bad, downright terrible children’s show. It has disgusting character design, laughable animation, a lacking story, and cringy religious undertones. Never before have I seen such a monstrosity in the form of Jay Jay the Jet Plane, which plagues PBS Kids’ almost spotless record of good children’s shows. I feel sorry for all of those forced to work on it, even sorrier for those who watched it and lived to tell the tale.

thank you for reading my wonderful essay. apologies for the image, you may need to burn your eyeballs out with bleach after seeing it

akechi_goro_love_machine as well as 3 guests left kudos on this work!