Flowers, misunderstandings, and too much bitterness in this cup of wine laughter

this is a translation; the original fic is here:
https://archiveofourown.org/works/22025857

written as a thank-you gift for the most talented friend i've ever got *saluts* also the most patient error-catcher. Copyrights of the artwork below go to them also, @dede_fabulous

The deliberations of the Committee ended hours ago but neither Saint-Just nor Robespierre moved from their respectful places, only stopping in their work to share a thought or an idea aloud.

Likewise to the two debaters, the street lamplighter abandoned his home, rising to light through the deepening darkness coating around Paris. But the change in lighting didn't stop the work inside the building as it didn't stop a man walking up the stairs.

Camille Desmoulins, although he wasn't visible through a bunch of sunflowers held against his chest, knocked lightly and not concerning himself with hearing actual permission to enter, slipped inside.

He hadn't expected anything warmer than "enter" or "come in" which undoubtedly would be thrown in his direction if he waited. So why bother?

"Anything..." snapped Antoine before being stunned into silence. He wasn't one to blame, though. It was a bit unusual to see a walking flower shop at your doorstep, even more if said doorstep belonged to the Committee.

As Saint-Just was processing who was hidden in a mess of stalks and golden petals, Maximilien raised his sight, not corrected by the glasses resting on the tip of his nose.

For his own dismay, he recognized the martyr behind the charming wall.

"Ca... Desmoulins?" he asked, voice stiff with uncertainty but the uncertainty wasn’t carrying a pound of weakness. It was calculated and cold as ground frosts in October.

"Such times, when despotism grows in the least expected hearts. Best wishes to my favorite of them all."

Camille smiled broadly, placing the bouquet in front of Maxime but making sure some of the golden crowns nudged at Saint-Just in very humane malice.

Robespierre seemed to be thrown away in a way that robbed him off well-prepared phrases he usually wore around his consciousness and made his usually bright mind into an awkwardly teenage soup. Camille was under the impression his ex-friend was sickened. Even though a false sound resonated inside him, he tried not to worry about Maxime's unforeseen knowledge about the flower language.

As - he was sure of this one - he was unknowledgeable in interpreting someone else's, terribly obvious, feelings.

"Uh, merci, I suppose. I won't ask why did..." He didn't finish, interrupted by the loud sneeze that shook Antoine’s entire body.

Maxime sighed, gathering the bouquet away from the co-committer. He hadn't lost an enigmatic note in his bright green eyes as he stared at the obviously proud of himself Camille.

His ex-friend bored his eyes into him much the same, trying not to alert anyone that the tips of his ears seemed to grow warmer with each passing minute.

"We have a season of confessions," he pointed out, not daring to change his soft smile. The darkness in his eyes glittered adamantly.

"We should not have," coughed Saint-Just but he was ignored. He rolled his eyes, trying to get away from the damned flowers.

"Then you come here, after months of disagreements just to crown me with the title of a despot?" Maxime's voice was dangerously low, but then again, it wasn't filled with threats. Only with shaking sadness.

Maxime froze entirely, except for a nod that might have been made unconsciously.

"Were you as courageous in your paper as you are here"

Camille raised a brow. "What do you mean, Robespierre?"

"Does hiding behind Danton ring any bell?"

Saint-Just coughed again, filled with amusement, which as before was thoroughly ignored.

"Danton'd bring you flowers at your funeral. But frankly, what else were I expecting? Unassailable monsieur Robespierre won’t bow to shake hands with the populace, that much is certain."

Sour words brought him up his feet. He was ready to leave.

"The populace, as you call them, doesn't call me a despot."

Something flashed upon Camille's face as he turned.

"Yet," he whispered, voice dripping with compassion, as if saying aloud another thing could bring him down, as if it could ruin him entirely. "Do not forget to water them. They too die easily from ignorance."

There was a squeezing feeling tugging inside Maxime's chest.

"Overdoing isn't good. For anyone."

But either Camille wasn't listening, or he didn't exert himself to think what Maxime meant by that.

And it was softer than everything he had said for so many months apart. Parting, yes, but softer.

He disappeared in the doorway, leaving the bouquet behind. Sunflowers were mangled carelessly at the table, in a similar manner to pieces of someone's shattered heart.

"And here I thought you can't descend into patheticalness more. Your Desmoulins' mind is like Marat's lair," laughed Saint-Just, throwing himself on the back legs of his chair. He looked at Robespierre in search of agreement.

Maxime just stared at him, blindly and hard, and didn't answer. 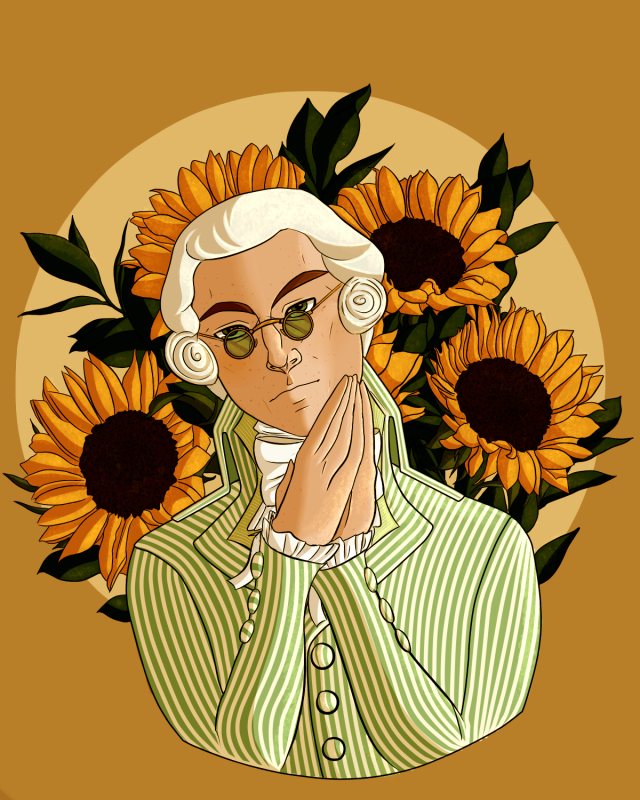