George has been struggling to keep his feelings for Ringo a secret, and after two months, Ringo confronts him about the strange way he's been acting. Ringo discovers that George has feelings for a man and is curious about who it is. But George, who is scared to tell Ringo that it's him, panics and gives Ringo the first name that pops into his head, hoping that he'll drop the conversation.

He didn't plan on Ringo insisting on being his wingman to try to get George together with the man in question. 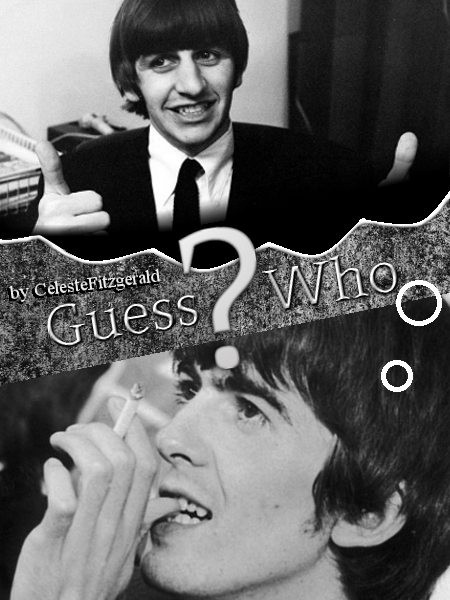 George unlocked the hotel door and stepped inside, breathing a sigh of relief. He felt bad for ditching the rest of the group so early in the evening, but he wasn’t in the mood to party. There was too much on his mind.

Ringo had certainly looked like he was enjoying the party, especially with the way that girl was hanging off his arm the whole time, with her annoyingly fake laugh and obnoxious makeup and stupid hair…

Damn it. George fell backwards onto his bed and pulled his hair. If he didn’t start controlling his jealousy better, Ringo was going to notice, and he couldn’t let that happen. He couldn’t risk ruining their friendship. Repressing his feelings had been getting harder and harder over the past two months, but he knew it was what he had to do.

He’d get over his feelings for Ringo eventually. He had to.

The doorknob started to rattle, and George looked up as the door opened. “Hello, George,” Ringo said as he stepped inside.

“You’re back early,” George said, propping himself up against the pillows.

“Hah, you’re one to talk.” Ringo sat down on the edge of the other bed and faced George. “What happened back there? One minute you were there talkin’ to Paul, then suddenly I looked away from Sarah and you were gone.”

Ringo frowned. “Stop lyin’ to me, Georgie. I can see your face getting all weird and tense. You’re hiding something.”

Taking a deep breath, George stared at the wall in front of him. “I’m fine.”

“No, you’re not.” Ringo moved over to George’s bed and placed a hand on his knee. “You’ve been acting strange for weeks now.”

George tried to figure out what to say, but it was hard to think with Ringo’s thumb sliding back and forth on his leg. He jerked his leg away and pulled his knees to his chest. “I…I don’t…”

“If you really don’t wanna tell me, that’s your decision,” Ringo said, folding his hands in his lap. “But maybe I can help.”

Biting his lip, George looked down and shook his head. He just kept digging himself deeper and deeper. If he had just kept pretending that everything was fine, Ringo would have dropped the conversation. But now George had to give him an answer, and he had nothing—

It wasn’t until then that George realized that his vision was blurred and his cheeks felt damp. “God, sorry,” he said, wiping the tears from his face. This night was a disaster.

Ringo scooted toward him until they were both leaning against the headboard, and he put an arm around George’s shoulder. “Please, let me help you.”

George couldn’t resist—he leaned into Ringo’s embrace and rested his head on his shoulder. It felt too good—it felt right. But that was what made it wrong. He tried to shift away, but Ringo tightened his grip.

“Is it about Sarah?”

George froze. “W—what about her?”

“Oh god, it is, isn’t it?” Ringo sighed. “I know you haven’t been having much luck with the ladies lately—I wasn’t tryin’ to, you know, use Sarah to rub it in your face or anything. You’re a great man, George—you’ll find the perfect girl before you know it.”

…Oh. Ringo was more perceptive than George had thought for noticing his anger toward Sarah—even if his reasoning wasn’t quite correct. But now that Ringo had given him a way out, George was going to take it. “Then why hasn’t it happened yet?”

Ringo squeezed his shoulder. “God, I don’t know. Should’ve happened years ago, if you ask me.” He paused for a moment, then added, “We could head back downstairs and find you someone tonight?”

“But I want to. C’mon, we’ll find you a pretty girl, you’ll hit it off…maybe I can spend the night in John and Paul’s room so you two can have the room to yourself—”

“Oh god no, you really don’t have to.” As grateful as George was for an excuse to hide the truth, he didn’t want to take the lie that far. He had made the mistake of being with girls before, and he didn’t want to put himself through that uncomfortable hell again. “It’s—I’m fine, really.”

Ringo gave him a confused look. “But I thought that was what you wanted….” His eyes widened. “Unless you don’t want just any girl, you’ve already got your eyes on one, don’t cha?”

George hurried to conjure up an image of the most generic girl he could. “She’s, uh…she’s got blonde hair—and green eyes. A little short.”

Ringo nodded and waited. How much more did he want to hear?

“Lovely sense of humor. Beautiful smile, even more beautiful laugh.” A smile crept its way onto George’s face as the imaginary girl left his mind and someone else entered. “But the best part is how talented he is, he—”

He stopped talking when Ringo started laughing. “How talented who is?”

“What do you mean? What did I—fuck.” George slapped a hand over his mouth when he realized what he had said. How had he let himself slip up so badly? “Oh god,” he mumbled into his hand.

“Jesus, George, what’re you gettin’ all freaked out about? You just said the wrong word, it happens to everyone. Go on, what makes her so talented?”

George tried to breathe. He tried to think. He could fix this, Ringo hadn’t realized—

With his hands shaking, George turned toward Ringo, whose face was unreadable.

No. George couldn’t do this right now.

And he felt a light touch on his hand.

The tears started falling again, but this time they were tears of relief. In retrospect, Ringo’s acceptance shouldn’t have been a surprise—after all, none of them had any problem with Brian—but that didn’t make it any less terrifying. Of course, Ringo still didn’t know that he was the object of George’s affections, and George intended to keep it that way.

Ringo patted George’s hand once more before resting his hand in his own lap. “Wanna tell me about him? I won’t tell the others.”

George bit his lip. “Not tonight.” The night had been extremely overwhelming, and all George wanted to do was sleep.

“Alright. But whenever you’re ready to talk, I wanna hear about this boy who makes you smile so big.”

George couldn’t hold back another smile. Ringo always had that effect on him.

Ringo always had that effect on him, too. “Can’t help it,” he muttered.

“Alright, alright, I’ll let you sleep,” Ringo said as he scooted toward the edge of the bed. But before he got up, he leaned over and wrapped his arms around George. “You know I’m always here for you, right Georgie?”

Hesitantly, George hugged him back. God, it felt nice, with Ringo’s hair tickling his face and the scents of shampoo, sweat, and alcohol wafting through the air. He didn’t want to let go. “Thank you,” George whispered into his shoulder.

With an adorable, eye-squinting smile, Ringo finally got up to get ready for bed, and George took the opportunity to do the same. With the scent of Ringo still lingering on his pillow, George slept well that night.