This one fought me all the way but I was finally able to get it done. I hope you all enjoy ^ ^

As the rest of the week passed, Alex, Michael, and Adrian were all able to make up and settle what happened between them.

Michael and Adrian’s relationship has really blossomed over time. If Adrian didn’t understand something, and the Professor was telling him he should’ve taken better notes or look over the posted ones on the schools website, he’d go to Michael for assistance who’d look over what notes Adrian took along with the ones the Professor posted in order to help Adrian in ways Alex hadn’t dreamed of being able to do.

While Alex would be making breakfast, lunch, or dinner, he’d use Michael and Adrian talking as background noise until it was time for him and Michael to eat.

Those two had a love for science and math that Alex just couldn’t hope to comprehend, but that was the beauty of Michael getting to know his son, their genius just seemed to click together easily where Alex’s genius only expanded so far into Mechanical Engineering until he got confused himself.

On Saturday, it was like any of the other days that Adrian called.

Michael was helping him figure out how to connect three circuits to one power supply without overloading it and causing the power supply to die out in a puff of smoke...or Alex thinks that’s what they’re talking about. Then again, this is Mechanical Engineering they are both talking about; Alex knows how an engine works, but he’ll be doomed in making something bigger.

But, he still enjoyed them talking with a soft smile on his face as he chopped some green onions that’ll be going into a pan with other veggies that’ll cook alongside a couple omelets.

Breakfast at its finest on such a heartbreaking morning.

Michael had to go back to Roswell today and Alex didn’t want him to go so he’s secretly trying to monopolize his time by enlisting Adrian’s help, using his sexual prowess, and really just anything to get him to stay longer.

He knows that he and Michael will be able to keep in contact through the phone, but it just wouldn’t be the same when he goes from falling asleep with Michael beside him in all of his high-temperature glory to suddenly having to add another comforter over his bed in hopes of just replicating that same heat.

Alex would only admit to himself that he was to the point of tying Michael to his bed just to prevent him from leaving, but he knew that wouldn’t be fair to Max or Isobel who counted on Michael to be there for them whenever they needed him, and they’ll be needing him when he returns for one thing or another while Alex has to deal with an empty apartment once more.

He’ll admit to anyone and anything that he is a terrible empty nester and that quiet is his kryptonite after seventeen years of having someone else being in his space and talking about things that he could only nod and agree with.

It’s going to be so hard returning to that sort of life without Michael being there.

Placing the plates down on the table for the both of them, they both say goodbye to Adrian so they could eat their breakfast which was filled with a tense silence.

Both of them not wanting to acknowledge what day it is nor wanting to over complicate something that is still so new.

They had, literally, let their attraction for one another dictate what happened when Alex went down to Roswell to visit, and though they’ve been texting for a month, it seems like they are still rushing their relationship like they did back in high school in a way.

Alex loves it, don’t get him wrong, but he’s sitting there already thinking about asking Michael to move in with him which is not how healthy relationships work. Healthy relationships have the potential couple going on dates, talking to one another, Netflix and chilling, and then the sex happens with possibility of marrying and having kids in the future.

They’ve skipped the first three steps, got to step four, bypassed step five and then hit the sixth one all within the matter of a few days back in high school. Teenage hormones aside, Alex wouldn’t have gotten pregnant with Adrian if Michael was a normal human living in Roswell and it sometimes still trips Alex up that Adrian came from him.

Alex feels like they should slow down and do it right this time. They haven’t said what they are to one another officially and Alex wants that label. He wants to be able to tell the guys over at the garage that the hot, curly-haired mechanic that they’ve seen around the shop is his boyfriend and not his...whatever he is right now.

He wants to continue texting Michael while knowing that some Lindsey or Chad won’t be under him feeling the way Alex feels whenever he is.

He wants every little piece of Michael that he can get until they both feel ready to really be with one another. He wants the dates, the spontaneous visits, and the surprise gifts that come with dating someone he knows is his forever.

Romantic comedies may be silly, but they know their shit when it comes to wanting to make someone swoon with that “soulmate” feeling and Alex wants to feel all of that. He wants his whole being to light up just by seeing Michael coming towards him, and he wants Michael to go from being sarcastic just to be sarcastic to being sarcastic in order to get a laugh out of Alex.

He wants that playful look in Michael’s eyes when he’s poking fun at Alex for knowing some pop culture thing, and Alex wants to say something trivial just to get Michael confused about what he’s talking about.

He wants, he wants.

He wants to kiss Michael and that’s what he does by leaning over the table.

The frantic pace at which they make it out of the room suggests that Alex isn’t the only one that doesn’t want to leave, but they can only prolong Michael leaving for so long until he’s packed and ready to go.

The both of them, freshly showered, just stand there awkwardly not knowing what to say to the other. Their feelings for the other is very plainly obvious but, when it came to an emotional moment like this, they were both not prepared to say what they wanted to say nor ready to actually say it even if they had the words.

“So, I guess, I’ll see you later then” Michael says as he picks up the dufflebag he’d brought along with him.

“Yeah, uh, I’ll text you” Alex says awkwardly back as he scratches the back of his head while looking down at the floor obviously chastising himself mentally for saying that.

As Michael makes his way over to the door Alex can’t help but call out his name which has him looking back to him.

“I’ll miss you” he says finally letting his heart speak for him rather than his mind trying to make the words into something different than they actually were.

Michael smiles softly with an “I adore you more than anything else in this world” expression on his face as he replies back in a mumbled tone of voice, “I’ll miss you too.”

Alex walks over to him just to bring Michael into a kiss that he pours all of his love and affection into for the man that he’s loved since Senior year, throughout all of Adrian’s life, and up to that very point even if he knows it’s too early to tell him; he at least wants Michael to feel it coming from him.

Michael isn’t at all taken aback from the feelings being poured into the kiss as, it seems from Alex’s perspective, that he whole-heartedly embraces them and reciprocates them to the very same lengths to which Alex feels them.

When they break for air, Alex pushes their foreheads together with his eyes shut wanting to savor just that last moment he has with Michael as their hands curl together desperately trying to cling to one another as long as they can.

“I never thought I’d have you again” Michael mutters out surprising Alex into smiling.

“You’re not the only one. I thought once I returned to Roswell, you’d have been long gone making a name for yourself somewhere, somehow.”

Snickering, Michael says, “Maybe I would’ve, but I had this weird feeling that I needed to stay.”

“Oh, really? For seventeen years, you stayed in Roswell waiting for my inevitable return?” Alex joked as he opened his eyes just to look at Michael with a real, genuine, megawatt smile that he thought had long ago just been reserved for Adrian anymore.

“Had to come back sometime, baby” Michael says with all the swagger behind his matching smile.

Rolling his eyes in an adoring manner, Alex pushes Michael towards the door, “Get outta here before I force you to stay.”

“You're his only employee, and he barely pays you for all the work you do for him.”

“Sometimes, it’s less about the money and more about keeping myself busy doing something,” Michael tells him, hefting his bag back up with his right hand.

“Heard that,” Alex says, still smiling at him.

“Text me, I’ll come up for anything...even a booty call.”

Laughing, Michael finally leaves Alex who still has his megawatt smile on his face standing in his living room alone, once again.

Before Alex can dwell on the fact that his home is empty besides himself after a week of having the man who is the love of his life in it, he gets a text message. 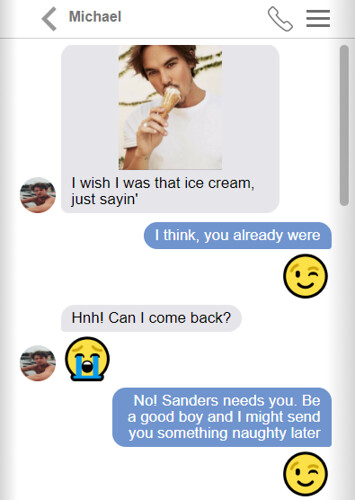 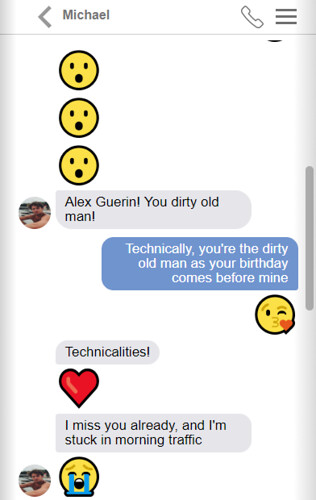 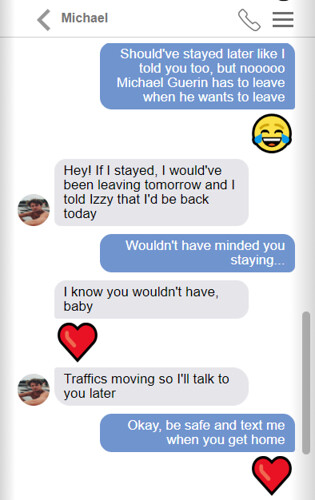 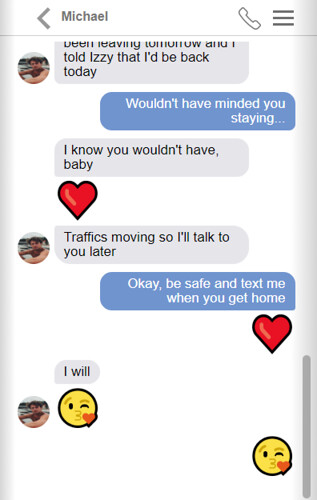