The Illustrated World of the Shyest Vampire

The adventures of Midir and his friends are now presented in visual form. 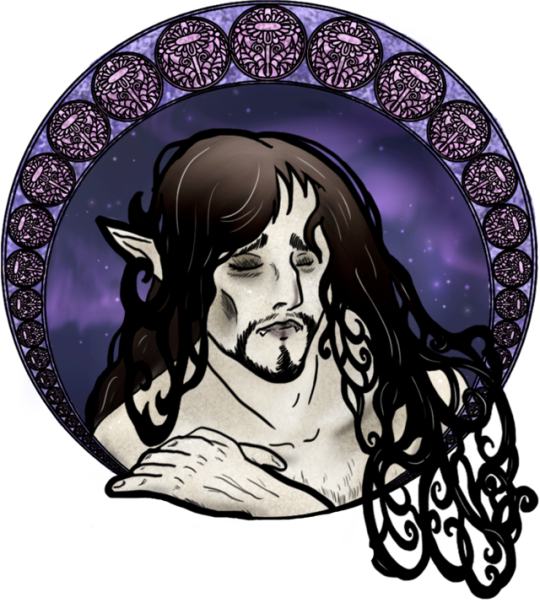 Chapter 2: All My Life I Memorize Their Faces

When he was still living in Castle Volkihar, the reclusive and self-loathing Midir was a bit like Quasimodo (with Harkon acting as his Frollo). As a habit picked up in the days of his seclusion behind the castle walls, he still likes fashioning little figurines out of clay, depicting the mortals he has met and would have liked to befriend if he wasn't so terrified of being hunted because of his condition. The dolls he is holding right now represent Faendal and Camilla Valerius, whom Midir helped sort out their relationship (staying in the shadows all the while, as is his way). Chapter 3: Sofie and the Thane

This illustration is a bit more humorous and light-hearted. Made in the style of Mina and the Count animated shorts, it depicts Midir and his little friend Sofie from Windhelm. Chapter 4: The Bravest Deed of Erik the Slayer

Due to Midir not meeting the traditional image of the Dragonborn (not only is he an elf, but also a vampire of all things), he and his friend Erik make an arrangement for the Nord lad to parade publicly as the Dragonborn and take credit for all the dragon-slaying feats - which he actually enjoys, not the least bit due to the number of fangirls and fanboys this earns him. But when Midir is captured in Windhelm, having been framed for the Butcher's crimes, and is left to burn away in the sun, Erik has to step forward and, with the encouragement of Ria, the other member of their adventuring trio, admit that he is not the real Dragonborn. And that will be the moment when he finally turns from boy to man. Chapter 5: I Kissed a Vampire Yesterday, Whom Did You Kiss?

A tender moment between Midir and his beloved Ria, in the style of Gustav Klimt. Persona_5_fan, HopeStoryteller, Thirtyk94, Dragxon, and Mintaka55 as well as 13 guests left kudos on this work!