Bobby accidentally finds an explicit picture on Dean's phone, leaving both of them in an awkward situation. (Please be aware this contains a NSFW manip)

Please do not re-post any of my fanart or writing without credit/permission.

Come visit me at tumblr

“Where’d you put that medical examiner’s report?”  Bobby yelled from the other room.

Dean rolled his eyes and wiped gun oil off his hands with the rag he’d set out on the kitchen table.  He reached out and grabbed the next gun laid out for maintenance.

“It’s on my phone.  Sam sent it to me this morning,” he called out.  "It’s in the icon that says downloads.“  He paused and listened to the muffled noises from the other room.

Dean shrugged and went back to cleaning the glock.  He lost track of time, his mind wandering like it usually did whenever he was focused on guns or his car.  When he finally looked up from his task, he was surprised to see the light through the window had dimmed significantly and his stomach was growling.  Standing, he stretched for a moment before flicking the kitchen light on and cleaning his hands thoroughly at the sink.  He made his way to the doorway of the library to see if Bobby had made any progress.  The last few days had been quiet and Sam had left the previous afternoon, heading three towns over to do a preliminary investigation of some possible rugaru killings.

Bobby had turned on a small lamp and was sitting behind his desk, thumb playing absently against the corner of a book he was staring at, but obviously not actually reading.  Dean waited a few minutes for Bobby to notice his presence, but the older man was clearly deep in thought.

"So?” Dean asked, breaking the silence of the room.

Bobby’s head jerked up in surprise, his hand automatically reaching out to the handgun sitting on his desk.  Dean chuckled and leaned against the door frame.  Raising an eyebrow, he watched Bobby settle his hands back on the book while he repeatedly opened and closed his mouth before finally answering.

“So … what?”  Bobby asked gruffly.  He slammed his book closed and his eyes scanned the room distractedly, his gaze finally landing on a ten-year-old coffee stain at the corner of his desk.

Dean’s eyes narrowed and he walked over nonchalantly, folding his arms across his chest.  Bobby stiffened visibly and moved his hands back, pressing his palms against the arms of his chair.  His eyes stayed locked on the same coffee stain and Dean frowned in confusion.

“So, did you read the report Sam sent?  Sound like a rugaru, or not?”

“Uh,” Bobby paused and reached up to adjust his baseball cap nervously.  Dean waited, his eyes trained on Bobby’s face.  He could have sworn the man looked guilty.  It was an expression Dean had rarely seen on Bobby and his curiosity was instantly peaked.

“What the hell is going on, Bobby?” he blurted out.  To his surprise, Bobby jolted in his seat and looked up at Dean with wide eyes.  Dean was beginning to wonder if a monster was hiding under the desk, threatening Bobby with death and dismemberment if he let on that something was amiss.

“Nothing!  I, uh, couldn’t find the damn thing,” Bobby stammered.

“I said I’d find it for you.”  Exasperated, Dean reached out and grabbed his phone from a pile of news clippings.  He glanced up and watched as Bobby scratched the back of his neck anxiously.  Dean could have sworn a faint blush was creeping up from behind Bobby’s beard, but he dismissed that thought.  Bobby hadn’t blushed a day in his life, even when Crowley had shown off the evidence of a shared kiss to Sam and Dean.

Dean flicked his thumb lightly across his lock screen and tapped open the icon marked “DOWNLOADS.”

“Jesus Christ, Bobby, it’s not that hard to-”

Dean's breath caught in his chest and he froze.  He stared down at the files he had saved and wondered if he was stuck in some surreal alternate universe where his bad luck had somehow increased by five billion percent.  Stupid, stupid, stupid!  A numbing shock spread through his body, unfolding from the pit of his stomach and winding itself through all of his extremities.  He could barely feel the phone in his hand and tightened his grip until the tips of his fingers turned white, the plastic casing of the phone groaning in protest.  Blinking, he forced himself to look up at Bobby.

It was apparent that Bobby had seen the photo.  His eyes flitted restlessly, avoiding Dean at all costs.  Dean held his breath, knowing that if the door to Lucifer’s cage opened up in Bobby’s library, he would gladly throw himself into it at that moment. Abruptly, Bobby stood, the jarring scrape of his chair barely registering through the pounding panic rushing through Dean’s ears.

“Uh, better get some grub started,” Bobby announced.  He made his way quickly around the desk and strode into the kitchen, leaving Dean standing in the library to calculate how long it would take to find the nearest crossroads and summon a demon for a quick deal.

Dean let his head fall forward and he closed his eyes.

Opening his eyes, he forced himself to look at the picture lit up on his screen, marked 1 of 23.  Of course it couldn’t have been 2 of 23, because that would just have been too convenient.  No, it had to be the most recent damn thing on his phone, downloaded fifteen fucking seconds after the report Sam had sent.  He gave a small modicum of thanks to his phone that at least there was nothing indicating Sam had been the one to send the photo.  Or, perhaps more importantly, that it was Sam in the photo.  But, that didn’t help the fact that Bobby had discovered a saved picture of a toned, obviously masculine torso leading down to a hand loosely holding the base of a straining, hard cock. Sam had texted him early that morning with the message ”wish you were here,“ the report and photo both attached.  In his sleepy state, Dean had typed back ”me too,“ and subsequently downloaded the M.E.’s report and picture before rolling over and going back to sleep. 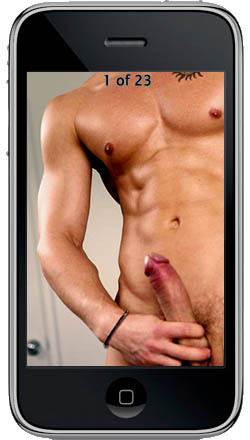 Taking a deep breath, Dean closed the files on his phone and made his way to the kitchen.  He stopped a few feet behind Bobby, where he was stirring something on the stove, presumably chili by the smell of cayenne and paprika wafting through the air.  Dean shifted nervously and clutched his traitorous phone tightly.  He swallowed and listened to the sound of his own dry throat clicking with the effort.

"Look, Bobby, I’m sorry.  I, uhhh,” Dean faltered and wracked his brain for the right thing to say.  He wanted desperately to come up with some joke or plausible excuse to dissipate the tension in the room, but apparently his ability to think had evaporated, only to be replaced by complete embarrassment and shock.  He cleared his throat and continued.  "I’m sorry you had to see, uh,that, Bobby.  I forgot-“

A huff from the other man made Dean stop short.  He waited to see if Bobby would respond, almost hoping that he wouldn’t.  The silence was oppressive, and just as Dean opened his mouth to say something, anything, Bobby let the spoon he was using clatter onto the counter.  He turned toward Dean and crossed his arms, sighing as he leaned back against the edge of the stove.  Settling his gaze on Dean’s face, he gave a small, sad smile.  Dean felt his cheeks heat up under Bobby’s stare and he instinctively looked down at the floor, vaguely, and maybe a bit hysterically, thinking he and Sam should really replace the dented and chipped linoleum some time.

Dean had spent his whole life surrounded by men, and not just any men, but hunters.  Non-emotional, grit-your-teeth-through-the-pain, kill-first-ask-questions-later, hunters. The thought that Bobby might never see Dean as one of them again suddenly broke Dean’s heart.  His vision blurred with unshed tears and he closed his eyes.  Don’t be a fucking fag, Dean thought to himself.Not in front of Bobby, anyone but him.

"Look, boy,” Bobby said softly.  "I’m the one that should be sorry.“  Dean looked up in bewilderment, his eyes wide and lips parted.  Bobby unfolded his arms and scratched his beard idly.  "I shoulda just minded my own dang business and ignored the picture, Dean.  Shoulda done what I was supposed to do and just read what your brother sent.  I’m a damn fool.”

“But, um.”  Dean was at a loss for words.  Bobby apologizing was definitely not a scenario he had considered.

“Shut up and don’t be stupid.  I still think you’re an idjit and you drive me to drink, but that ain’t got nothin’ to do with what I saw on your phone. And it don’t change the fact that you’re a good man and a pretty damn decent hunter, when you want to be.”  The clear affection in Bobby’s voice made Dean relax minutely and the corner of his mouth quirked up in a half smile.

“So, you don’t have a problem with … ”  Dean trailed off, unable to finish the question.

“With you liking men?”  Bobby asked, an eyebrow raised.  Dean gave a short nod, and watched Bobby’s face closely.   He gave Dean a warm smile, one he remembered from childhood.  One that told him Bobby loved him like a son, even if he’d never say so out loud.

“Dean,” Bobby sighed.  "I’ve spent an awful lot of my adult life worrying about you and your brother.  Getting killed.  Possessed.  Sent to Hell. And a whole basket full of other crap I’m not even gonna mention.  You think I’d give up sleep worrying about if you like boys or girls more?“  He let out a sharp laugh and pushed away from the stove, moving closer to Dean.  Resting one hand on Dean’s shoulder, he gave a reassuring squeeze and huffed.  "Give an old man some credit, son.  I’m not used to seeing … ” He waved his other hand in the general direction of the phone still clutched in Dean’s grip.  "Gotta give me a few to get over the shock.“

Dean let out a short laugh and blinked quickly, refusing to let the chick-flick moment become even more mortifying with the appearance of tears.

"Thanks, Bobby,” he stated simply.

With one last squeeze of Dean’s shoulder, Bobby nodded and turned back to the stove.

“Now, let’s eat.  Then we can figure out if that brother of your’s is onto something with his rugaru theory.  I’ve been slaving over this leftover chili and I’ll be damned if it’s going to waste.”

The next morning, Bobby patted Dean on the back and watched as the impala disappeared in a cloud of dust.  Shaking his head, he turned and went back into the house.  He hoped he’d eased Dean’s mind, convinced him that he was still the same hunter and surrogate son he’d always been to him.  Bobby smiled to himself as he thought of how much lighter and happier Dean had seemed this morning, the usual smirk and cocky strut on full display.  Bobby was an old man, but he wasn’t naive or bigoted.  He had been truthful when he’d told Dean he didn’t give two craps about what he liked in bed.  And if he hadn’t mentioned the fact that he recognized the bracelet in the photo on Dean’s phone, or pointed out that the edge of a very unusual, distinguishable tattoo could be seen, well, no need to add to the list of things to lose sleep over.