The Invasion of UNCLE Headqarters

The day started out quite ordinary for Illya Kuryakin, or so he thought.

Originally posted for the "What's My Line? Challenge on Section VII Live Journal. The prompt was "Liar liar, pants on fire."

The day started out as it usually did at the New York headquarters of U.N.C.L.E.  People were hustling and bustling along the grey corridors, going about their daily duties.

Napoleon Solo was sauntering along with his hands in his pants pockets, whistling some nameless tune as he was in an exceptionally cheerful mood.

He spotted a svelte strawberry blonde heading his way, and flashing her his patented smile; Napoleon uncharacteristically whistled a cat-call to her.

She turned her head, flipping her long hair back over her shoulder as she returned his smile.  That was the signal for 'full speed ahead mates' as Napoleon turned on his heels, beginning his pursuit. He didn’t recognize the her, and guessed she must be the new girl in the Communications Section he'd heard about recently.

Illya Kuryakin had opted to go get a late breakfast outside of headquarters on this particular day. His paperwork was up to date, as was Solo’s, the experiments in the lab were under control...there was really nothing for him to do at the moment. He wasn't in the mood for a workout in the gym, so his favorite past time of food became his focus.

He had his communicator, and heading across the street to Golden’s Cafe was not a difficult or dangerous task.  The Russian didn’t bother asking his partner as Napoleon was on the prowl, looking for a date for the evening no doubt, and Illya knew better than to get in the way of the American when he was in pursuit.

After a hearty breakfast of scrambled eggs, bacon and cheese on a hard roll, and home fries on the side, along with a piping hot cup of tea, Illya’s appetite was sated and would be held at bay until he had a snack later at the Commissary.  Today was doughnut day and he was looking forward to diving into some Crispy Creams, his favorite.

Having had too many experiences with starvation; Illya Kuryakin took great satisfaction in enjoying his meals, still given his higher metabolism, he would eat more than the average person. Only a privileged few knew the need for his caloric needs, and he shrugged off the whispers of those who called him a glutton.

After leaving the cafe Illya crossed the street and lightly hopped down the steps leading to Del Floria’s entrance. There was a carved Jack O’ Lantern sitting there in the stairwell as it was Halloween. As he opened up the door he was met not with the sound of a tinkling brass bell, but with a recording of a larger bell tolling and a wolf howling.

He shook his head.”Amerikanskiis and their holidays.” It was a sudden reminder that he needed to come up with a costume for April Dancer’s annual Halloween party.

Having outdone himself with his werewolf costume change as his trick last year, he needed something that would really throw off Napoleon this year.*

Illya suddenly chuckled to himself, realizing he’d finally been drawn into the ‘Halloween’ thing.  “Oh well,” he thought, “he did enjoy using disguises, and dressing up or doing make up was a good way to keep his skills well honed.”

He suddenly realized Del was nowhere to be seen. The man wasn’t at his usual spot behind the steam press. Illya walked to the back room, seeing if he were there, but Del Floria was apparently missing.

Illya immediately drew his Special. Something was wrong as protocol dictated an agent’s presence was required in the shop at all times. Even if the agent had to use the bathroom, someone had to come cover for him. It was standard operating procedure.

He picked up the telephone receiver at the front counter.

“Security, Kuryakin here...hello?” He clicked the button, trying to reconnect but there was nothing, the line was dead. Illya replaced the receiver in the cradle and headed to the steam press but first he pulled his communicator and tried opening a channel.

“Channel F- Security….Napoleon? Is anyone there?” Perhaps Communications had gone down internally? Still, he needed to remain on guard until the mystery was solved.

He gave the press the standard two shots of steam, a required part of the process to get into HQ, and dashed to the dressing room to turn the coat hook in time.

Slowly the heavy door opened and he found the reception room floor scattered with papers, and no receptionist.

Touching his fingers to the security pad to activate to activate his ID badge as he pinned it on; Illya continued on through the secondary door.

In the corridor people were slumped on the floor, not unconscious but definitely not themselves. Their faces were contorted at the end of their death throes, but they weren’t dead...apparently.

As soon as he stepped within their field of vision they looked up at him, moaning as they rose, stiff and corpse-like. There was a whole slew of them crowded together, reaching out towards him with desperate hands. 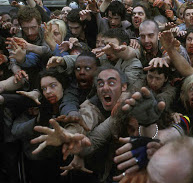 “Zombies?” Illya blurted out as he began to run. It was easy enough to get away from them as the undead were not exactly fast movers.  He rounded a corner and came to a stop as he spotted an emergency fire axe mounted on the wall, encased in glass, imprinted with the words ‘break in case of fire or emergency.’

This definitely qualified as one of those; Illya smashed the glass with his elbow and grabbed the axe. He hated the idea of using in on his fellow personnel, but he only had one magazine of live rounds in his gun. Shooting them would be more merciful and less gruesome than bashing the undead in the head with the axe in order to destroy their brains. Nine shots was all he had, not enough to defend against so many of the walking dead.

He headed immediately to Alexander Waverly’s office to assess the CCOs safety.

When the pneumatic doors opened he was relieved to find the Old Man very un-zombie-like and sitting at his conference table as if it were a normal day like any other.

“Sir what has happened to headquarters?” Illya breathlessly asked.

Waverly slowly turned his head. His eyes were blackened holes and as he opened his mouth a high pitched shriek emanated from it.  Other than that, he didn’t move, and Illya stepped away, assuming it was some sort of shrill sound to alert the others...other what, he had no idea.

As he backed through the door he heard another scream and someone or thing leapt on his back, wrapping its arms and legs around him.

Illya spun around, flipping the person away in one swift move. It was Lisa Rogers; her hair was wild as were her eyes.

“Fibber fibber you lied you lied!” She hissed at him.

At least she wasn’t a zombie, though she looked like a raving lunatic.

“What did I lie about Lisa? Come to your senses. What happened here?”

“You were supposed to keep us safe...you lied. Liar liar pants on fire!” She repeated it over and over.

“Lisa where is Napoleon? Please tell me?”

“Where is he hiding?”

“In your office of course.” She broke out into a fit of maniacal laughter as he left her.

Over the public address system someone was singing in a childlike voice the melody to ‘Ring around the rosy’ over and over again.

April Dancer appeared in front of Kuryakin out of nowhere, blood dripping from the corners of her mouth, and as she opened it with a hiss a pair of sharp fangs appeared. Behind her stood Mark Slate, his face pale, his lips blue and his eyes bulging...there was a hangman’s noose around his throat.

Illya shoved past them and dashed to the office he shared with Solo, hoping against hope his partner hadn’t gone mad, been zombified or worse.

As the door opened he saw a figure on the floor, scrambling on hands and knees to get behind one of the desks.

“Napoleon, it is me. Are you all right my friend?”

“Go away, it’s not safe here!” Solo called out.

“Come my friend, I will not leave you. Are you injured?”

“Illya I’m begging you to leave me, get out now.”

“It’s too late, “Napoleon growled. He put one hand up on the desk, and dark hair began to sprout on it. As Solo stood, his face contorted, his nose and mouth elongated, his ears grew long as he head morphed into that of a wolf. 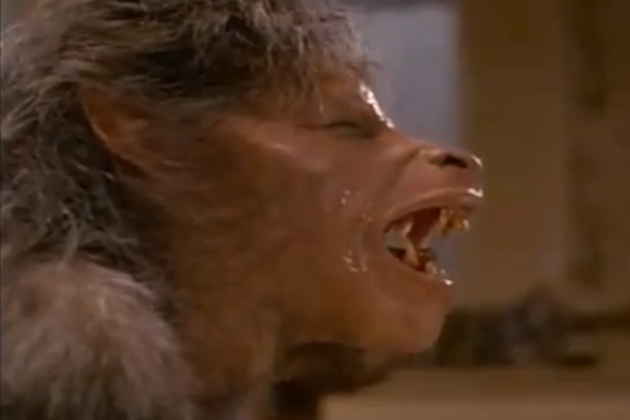 He slobbered and snarled, baring his fangs as he leapt across the desk, landing atop his partner.

“Noooo!” Illya cried out as his face being grabbed by a clawed hand.

The Russian opened his eyes, seeing the wolf hovering over him.

“Napoleon please do not kill me?”

“Kill you? Why would you think that tovarisch?” The American lifted the latex wolf mask from his face. “You really took some hit to your knoggin’ partner.”

Napoleon helped Illya sit up, as April, Mark, Lisa and several others hovered over him.  They were as he’d seen them, a vampire, a hanged man, a madwoman, zombies...all of them.

“What happened? he asked. Why do you all look dead or worse?”

“Darling, you’re at my Halloween party,” April said. “Goodness, I’m so sorry Illya, you were hit on the head with that flying punch bowl.”

“Yeah, sorry mate,” Mark said.” I tripped on the end of my hangman's rope and the bowl went sailing through the air.”

“That would explain the lump on my head and why my clothing is wet,” Illya hiked himself up with a grunt.

“Well that was some trick you pulled this year,” Napoleon clapped him on the back. You put on quite a show, yelling while you were out.”

“What did I say?” Illya grimaced, hoping it was nothing embarrassing.

“Oh you were battling it out with zombies, and werewolves....that happened to have invaded headquarters.”

“Oh, well given my surroundings here, I suppose that is what influenced my ramblings.”

“I suppose so,” Napoleon winked.

Veggies, galathil, and melindawriter as well as 4 guests left kudos on this work! (collapse)