elliot coming up behind her, lifting her hair, kissing her neck…

this all started with a tweet by @13starbuck42 based on a photo posted by @DickWolfU. @take_me_sw_nice responded with a paragraph, and @13starbuck42 replied with her own.

we volleyed back and forth on 33 tweets over 8.5 hours until the story was complete.

formatting is original to the tweets

elliot coming up behind her, lifting her hair, kissing her neck 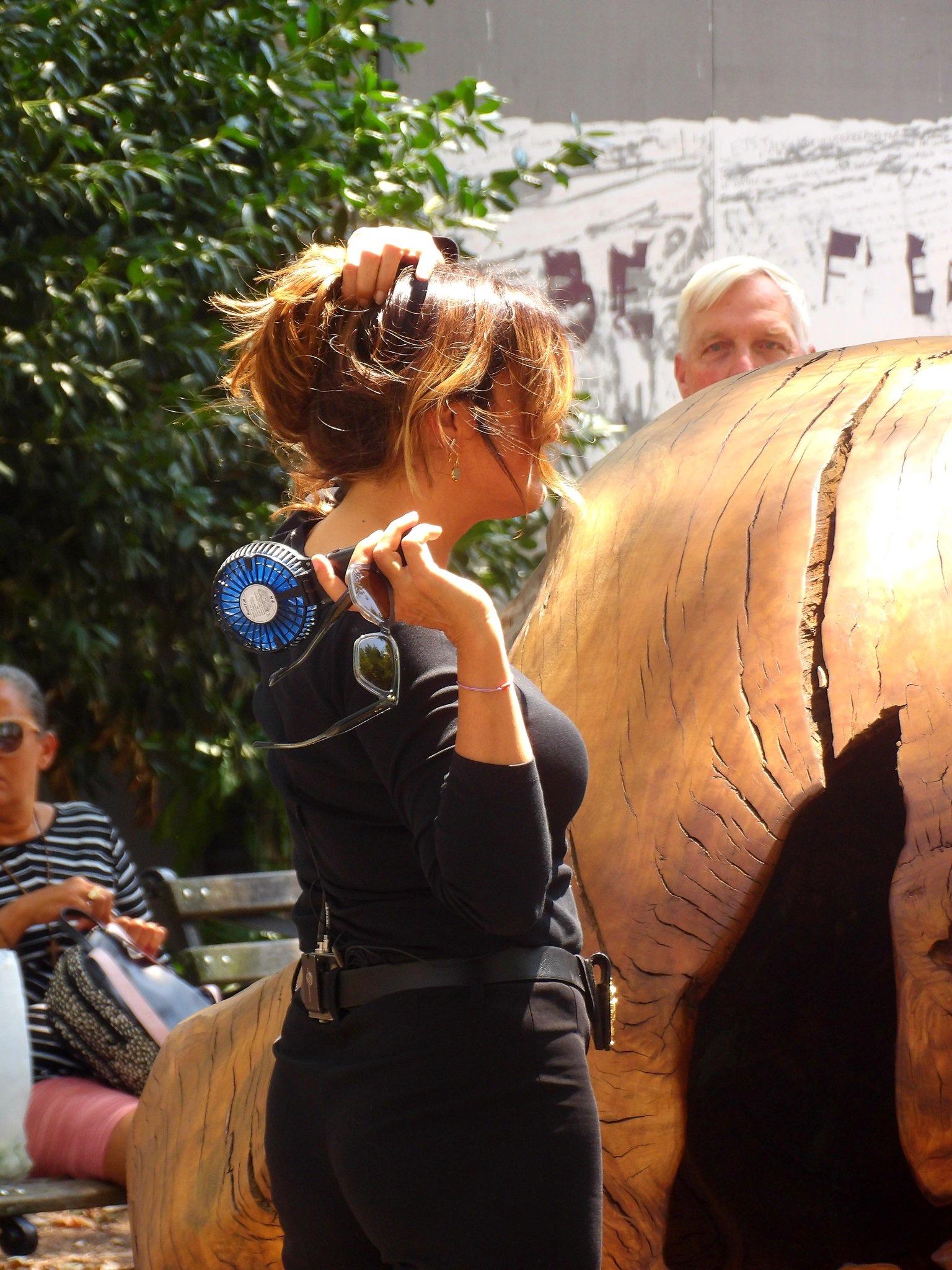 She tilts her head to the side with a sigh, and he releases her hair, letting it fall over her shoulder. His lips graze her neck as he places his broad hands on her hips and slides them down the front of her thighs, pressing her into him with his forearms.

“Too hot, El,” Olivia groans, because of the heat or because of the way he’s pressed their bodies together, it isn’t clear. Probably both. “We’re in public,” she quietly admonishes him, but that kind of turns her on, too.

He traces the curve of her ear with his cheek and murmurs, “Then tell me to stand down, Captain.” His right hand moves to the badge on her belt while his left splays across her stomach. He steps back, just an inch, just enough for air to flow between them again.

It’s so damn hot and they’re both sweating, but as soon as he moves she misses the way his thighs feel, the bones of his hips, the firmness of his abs. The solid mass of him against every luscious curve of her. “Mmm, come back,” she says, just loud enough for only him to hear.

He steps forward again and chuckles, low and cocksure. She shivers despite the heat. They’re mostly hidden away from prying eyes but she’s well aware that standing together like this is a little reckless. He makes her feel that way — youthful and bold.

Sighing, she reaches one hand up to sweep her hair off her neck, the other down to settle on his thigh. Elliot tugs on her badge again. His fingertips burn against her belly through the fabric of her shirt and Olivia suddenly wishes they were somewhere — anywhere — but here.

“We can’t do this,” she whispers, even as his fingers slip further down, dipping below her waistband, and with a quick gasp, her belly contracts and gives his hand a little more space. Not enough — not nearly enough for what she really needs. “Tell me,” he growls, “to stop.”

Instinctually, she arches—pushes her ass into his groin, her shoulders into his chest. His thumb swipes across the underside of her breast, back and forth, higher and higher, until he’s practically cupping her right there in the park while they pretend to stare at a sculpture.

The scent of his cologne mixed with his sweat is intoxicating and all of it — the heat of him, his broad hands, his rumbly voice, his solid body — threatens to obliterate every rational thought in her mind. She wants him all over her. Now. Even though it’s impossible. “Elliot…”

“I know,” he soothes, low and smooth. Heat prickles her skin and runs down her spine, landing right between her legs. Olivia whimpers. “Car’s parked right there, Cap,” he offers, nodding across the street, his breath hot on her cheek. “But I think maybe you wanna get caught.”

She feels the same energy she does when they’re about to do something monumentally unwise, like rush into an unsecured building without backup. As he waits for her response, the hand under her waistband slides to her hip. He hooks a finger around the thin strap of fabric there.

“Fuck,” she whispers, and it’s exactly the reaction he wanted. Elliot twists his fingers until the satin and lace panties dig into the crease of her thigh. “Tell me, Liv,” he taunts, “what’s it gonna be?”

It’s 4 in the afternoon and he snuck out of her apartment at 5 this morning and she shouldn’t want him this much already. “I think you wore these for me,” he continues, brushing his hips against her ass. “Won’t even have to take ‘em off for me to get in you.”

She feels her knees go weak at the thought of Elliot inside her again, full and deep, moving slow until she urges him harder, faster. She won’t beg. She won’t. “Please.” But she’ll ask — demand, even — because she knows he can’t refuse. “Please what, Captain?”

The part of her brain that still functions knows that they can’t keep going out here, but Elliot’s car’s windows are tinted dark in the back. “The car,” she decides, her heart thundering. He exhales quickly and his arms tighten around her. “I know a spot,” he replies.

He keeps his arm around her as they walk, fingers buried in her pants at the hip, and she can feel the arousal slick between her thighs. Elliot’s strides are long and purposeful, but she matches them easily (always so in sync) and they reach his suv in minutes, both breathless.

When he picked Liv up for coffee, he thought they’d take a nice stroll through the park and he’d drop her off back at work. He never in a million years thought he’d end up in the backseat of his car in a quiet underground lot, pants around his ankles, her thong pulled aside.

She’s splayed beneath him, laid back as far as the seats will go, boots off so she could shuck her pants. But he’d been impatient, pushed her knee to her chest as soon as her leg was free, and held fast to her ankle with one hand while the other tugged her panties out of the way.

She was ready for him, so turned on by the forbidden, by his fingers twisting in her as he drove. For all his bravado he was terrified she’d ask him take her there in the park, but he knew she wouldn’t. But now, in his car, in this dark corner, he lets loose.

Elliot buries himself in her and leans forward with a grunt, bracing on the seat, pushing deeper. The pace he sets is quick, but his strokes are long. Olivia moans and tilts her head back so he can nip and suck his way up her neck, across her jaw, until his lips are on hers.

“Can’t believe this, Liv. Can’t believe you.” He feels so alive, more than he ever did as a dumbfuck teen with more balls than sense. She’s always made him feel unexpected, electrified, but blowing up the barriers in their relationship has been like a bolt of lightning.

“You,” she grits out, “stuck your hand down my pants. In public.” Every third word is punctuated by a thrust of his hips. “Can’t get enough of you,” he reminds her, “never will.” Elliot pulls the cups of her bra down with one hand and toys with a nipple. “Fucking gorgeous.”

It’s blessedly cold in the car, A/C blasting, and he catches the goosebumps breaking out on her sweat-glowing skin. He folds himself over her, blanketing her with his overheated body. He slips one of his hands between them and speaks low into her ear. “Wanna make you scream.”

“Don’t stop,” she pants, an edge to her voice that tells him he’s on the right track. “C’mon Liv.” He’s all over her now; his body, his hands, his lips. Olivia fists her fingers into the fabric of his sweat-soaked button-down and pulls him close, angling up to kiss him.

He works her the way he’s learned — and he’s a quick study — both inside and out. When she’s close, when her moans drown out the sound of the rushing blood in his ears, her head falls back. He peels off her and drives into her and watches her, so beautiful as she comes apart.

“So good, Liv,” he pants. Even through the haze she clenches around him purposefully, murmuring his name and encouraging him to “Come, El. Come.” His vision narrows and in an instant everything goes bright and hot and wild as he tumbles after her.

Olivia hasn’t had sex in the backseat of a car since she was in her 20s and there’s probably part of her that should feel undignified but she can’t find it. It’s a bit awkward figuring out what to do once he slips out of her (he finds some unused napkins in the seatback pocket).

They put themselves back together as best they can: the napkins help, but she sacrifices her thong (he’s proud of that), and he’s too bulky to get his pants all the way up until he’s outside the suv. When they’re in the front seats, she laughs softly at the absurdity of it all.

An unfamiliar feeling bubbles up in her chest, overflowing through her mouth in a broad grin that she tries to bite down. When she looks over at him, he’s looking at her, his crystal blue eyes crinkled up at the corners, reflecting her grin back at her.

“You still want coffee?” he huffs, mostly joking. “I want a shower,” she replies. “And an ibuprofen.” But she’s still giggling, light and airy, and her eyes are sparkling and she tells him to drive to her apartment instead of the precinct.

When the car is parked on her block, Elliot kills the engine and she doesn’t know if he means it as a signal, but she takes it as one. “I’m going to clean up and pick Noah up from daycamp. I was thinking you could stay for dinner, if you want?” She’s nervous, suddenly, stupidly.

He’s got that look, though, the one he had at Christmastime — a boyish grin and knowing eyes — and it puts her at ease. “Yeah.” Elliot leans across the console to kiss her softly. “Yeah, I’d like that a lot.”