Put Your Hand in Mine, We'll Walk Side By Side

Fresh off a deployment to Dantooine, Cody is dead on his feet. Obi-Wan steps up and cares for him.

Or, Cody is exhausted and Obi-Wan shows his love by cleaning his armor for him.

This is my first Bingo card prompt ever, guys! I had fun writing it. Here's some fluff for you! :D Mando'a at the bottom, as always. 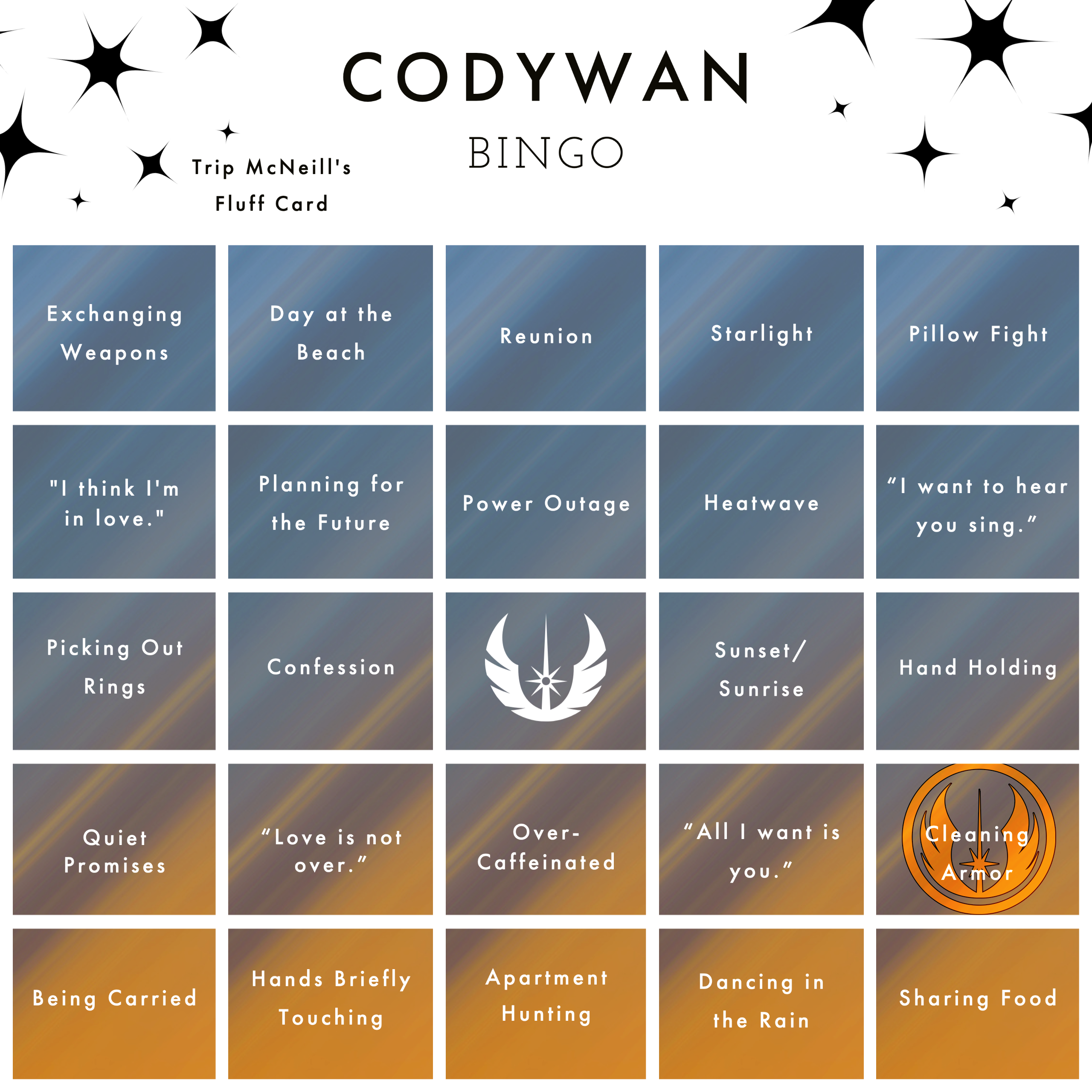 Cody trudged out of the still humming LAAT and into the bustling main hangar of the Negotiator, bleary eyed and half sagging from exhaustion. Around him, the rumble of ships’ engines, the echoing shouts of his men and the general chaos cause by post-deployment activities bounced and jostled him towards the lift. His feet knew the way, even if his mind was a smeary, disconnected mess. Three weeks they’d been down on the mud pit that also went by the name Dantooine, and after being caught in the rain nearly every day, he was just glad to be back on the ship and dry.

Getting clean could come later.

Somewhere in the din, he could hear the crisp Coruscanti accent of his general, but he was too tired to turn his head and locate the man himself. They could debrief later, his tired mind decided, and so choosing, he hit the button to call the lift with perhaps more force than strictly required. Time passed in a strangely swift chunk, and the lift was hissing open before Cody was quite ready to move. Low groan of effort making it past his lips, he staggered inside, turning and missing the button for his floor on the first swipe along the panel, cursing and then striking out again, victorious.

Backing up into the farthest part from the door, Cody braced himself against the wall and let his head loll, the occiput of the helmet clacking into rigid durasteel with an audible clunk. Through the manufactured view of his HUD screen, the commander watched the floors flicker by, eyelids drooping and snapping open in a steady rhythm. Truly, he was tired, but a little voice in the back of his mind told him that he couldn’t sleep until he at least attempted to clean the muck from his armor.

Caked in all the delicate bends, joints and circuitry was the last vestiges of Dantooine. The mud there was mildly caustic, and if he left it too long, it could do permanent damage to his armor. A situation he would rather avoid. Every fiber of his being protested the very thought of doing anything other than peeling out of his shell, the bare minimum for a shower, and then collapsing into bed. Any other sequence of events felt like an insurmountable mountain, a climb that never ended. His very bones were screaming for sleep, and yet, he could not rest. Still, there were things to do.

With a hiss and scrape, the lift stopped and opened, depositing Cody on deck one, where his and Obi-Wan’s quarters were located. A month ago, they had combined them, the commander moving in with the general, their romantic relationship growing into a deep and enduring thing. Cody was quite pleased with it, even if Obi-Wan’s rooms weren’t strictly meant for two people. It was worth the minor headache to go to sleep next to and wake up to him every morning. Stumbling over his own feet, right leg dragging a little behind the left, Cody managed to open the door on the third try, and he pushed himself inside, tugging his helmet from his head as he did.

The dilemma presented itself a new as he took in their rooms with his eyes.

On his side was his armor stand, empty, given the fact that he was wearing said armor, and to the left was the door to the refresher unit and sweet, sweet cleanliness. Desire for a shower won out, and Cody began to shuck his armor, the motions so engrained that even with his exhaustion, he didn’t struggle through or miss a single step, putting each piece exactly where it belonged on the rack. Task completed, he weaved his way to the fresher, eyelids half-closed, the world a misty, colored mass to his vision. Somehow, he managed to lose his blacks and pour himself into the sonic shower, and by the time the experience was over, he wasn’t sure what he’d done to get there. Still, he felt clean, so he stepped out, pulling a towel around his shoulders and a fresh set of blacks that had somehow appeared over his legs.

The source of the new clothes was made readily apparent when he left the fresher and spotted Obi-Wan sat cross-legged on the floor, the commander’s left shin guard and a scrubbing brush in his hands.

Cody blinked, startled enough that adrenaline briefly sharpened his mind and brought the world around him into focus. He frowned then, hands curled in the ends of the towel, head tilted a little to the right and wondering if he was supposed to say something or just stand there.

“Are you just going to stand there all night, Cody?” Obi-Wan did not look up from his task, left hand holding the dirty armor and right wielding the scrub brush with a single-minded focus.

“No,” Cody blurted, and so saying, walked forward and plunked himself down next to Obi-Wan, throwing his left arm around his jetii’s back and dropping his head unceremoniously on the other man’s shoulder, letting all the tension bleed from his frame. “’m not.”

“I can see that,” Obi-Wan lowered the piece of armor to rest on his thigh, head tilting just enough to see Cody and raise an eyebrow at him. He smiled, and it was very fond. “Are you going to help or just sit there?”

“Sit,” Cody mumbled, nuzzling his face into Obi-Wan’s tunics and letting his eyes flutter shut. “Don’t have the energy to move.”

Obi-Wan leaned in and laid a gentle kiss to Cody’s hair. “I noticed. Relax. I’ll handle this. If we don’t, you’ll need new armor by the morning.”

“Hnn,” Cody groaned out, the very thought enough to make him scowl. “I know. Was gonna do it, Obi-Wan.”

“Well, now you won’t need to,” Obi-Wan assured him.

Cody hummed and let himself start to drift, eyes fluttering open every so often when he felt Obi-Wan shift under his head, reaching to put a clean piece of armor away and grab another. The low, rhythmic scrape of the brush on plastoid soothed an ache deep in his mind that Cody hadn’t known he’d been harboring, a light tingling sensation spreading down from the base of his skull to the jut of his hips, relaxing all the muscles in its wake. It was a nice, comforting thing and he wondered if there was some way to replicate the sensation.

Breathing starting to slow and mind truly beginning to drift, Cody felt like conscious thought was water sliding through his fingers, impossible to hold onto, but a gentle, cooling sensation on overheated skin. Just as he was about to drift off into the land of dreams, a low voice was murmuring to him and a hand was lightly shaking his shoulder. Blinking, Cody lifted his head, looking up into the fond eyes of his jetii and smiling lazily at the sight.

“There you are,” Obi-Wan said quietly. “Time for bed.”

“Armor?” Cody mumbled, not quite able to get all the words he wanted out of his mouth.

“On the rack,” Obi-Wan twitched his head towards said rack.

Cody’s eyes tracked over to it, spotting the gleaming while plastoid laid just where it was supposed to be, not a hint of mud anywhere on the plate. He let out a breath, the last of the tension he was carrying escaping out of his grasp in that moment, and he turned his eyes back to Obi-Wan, finding the Jedi looking at him expectantly. Cody nodded once and started to push to his feet.

“Up you get,” Obi-Wan grunted, hands going under Cody’s arms and across his ribs, hauling the commander up and keeping him steady. Cody swayed and Obi-Wan tightened his grip. “Oh, easy there, Cody.”

“Barely,” Obi-Wan muttered rolling his eyes at Cody’s stubbornness, well used to such behavior by now. He guided the commander over to the edge of the bed and sat him down on it with little prompting. “Sit here while I get these robes off.”

Cody really did try to muster up a leer at that sentence, but it mostly left his face looking oddly droopy to one side. “Get the robes off, huh? Anything else you want to get off?”

Against his will, Obi-Wan laughed. “Cody, if I thought for one second you would stay awake through such activities, I would certainly try it.”

His scowl deepened. “I can be awake for sex.”

“Oh, Cody,” Obi-Wan shook his head in fond exasperation, bent at the waist to undo the buckles on his boots. “Your eyes are closed.”

The commander forced them open and folded his arms in a pout. “No, they aren’t.”

Obi-Wan just laughed again, tossing his boots with the Force over to the corner where he usually kept them, nimble fingers going to his belt and undoing the clasp. When it came free, it too was sent over to the corner where Obi-Wan’s footlocker lived, followed swiftly by over tabards, an obi, and a cream woven shirt. Cody really gave it his best to keep his eyes open, annoyed with himself for missing an opportunity like this, but his exhaustion won out, and before he’d realized it, the back of his head was resting against the wall, his eyes shut and his mind circling ever closer to the land of dreams.

The bed dipping jolted him a little, head lifting and turning towards the left, eyes blearily tracking the blurry form of Obi-Wan. Down to just his undershorts and sleeveless tunic, the Jedi reached out and dragged Cody with him up the bed, maneuvering the commander around until he was firmly resting on Obi-Wan’s chest. Heartbeat under his left ear, right arm thrown over a trim waist, right knee resting on a strong thigh and left foot hooked over an ankle, Cody let himself go boneless on top of his partner, warm, safe and content.

Obi-Wan smiled, pressing a kiss into Cody’s hair. “Good,” he dropped his hand, securing it over Cody’s shoulders, the left one coming up and wrapping gentle fingers around his commander’s wrist. “Sweet dreams, dear Cody.”

Last words falling from his lips, Cody let go of his grip on consciousness and let himself slide into sleep.