i love you with every piece of me left

"Andrea changed. Not the Sun anymore. She’s another version of herself. She reminds you of a version of yourself that you once despised. However, Andrea taught you to love each part and each angle of you, even the ones you hid most out of mortification. Everybody wanted to be you, but you never understood the appeal, with the exception of when Andrea stood in front of you like a mirror and showed her beautiful details. If you saw them in a certain light, they looked like yours, and so she filled you with self-love.

Um, I'm not so sure what happened here? This story is inspired by this week's prompt in a Mirandy Discord server (love you, peeps), settled as "How can you love someone like me?". Also, I'm a huge fan of The Haunting of Bly Manor, the fic doesn't contain explicit spoilers, but it does have hints and adapted quotes of the show.

I don't know if this is one of the saddest things I have wrote, but it is triggering. If you are going through a hard and difficult time, please, consider not reading it. Sending lots of love and hugs for you all. Be safe and well!

As usual, I don't own those characters and I don't obtain financial return by writing this one-shot. I wrote this story in one sitting, at ungodly hours, so consider it not beta'd.

Long locks fall in front of a hidden face, a face staring at the ground, defeated. This scene is almost like looking at a mirror, except, by the time you were Andrea’s age, your hair was golden and the feelings you had toward that reflected figure was pure shame and hatred at noticing so much weakness. Instead, you can’t stare at this person with nothing but love, care and preoccupation.

Promises are not things you usually do, mostly because you know you are so inclined to break them. Even your girls stopped asking you to arrive earlier at home when they were little, because they noticed how it pained you to say no. It also harmed to hear another no. And you couldn’t promise anything based on love, love was so ephemeral and ridiculous, it vanished in the blink of an eye. But, years ago, you wondered if this one was a promise that you could keep for once, besides loving your children indeterminately: loving Andrea.

Andrea, the person who had so much faith in you, who stared at you with so much belief it scared your soul out of your body for the first time. People always looked at you with anticipation, aiming for an opportunity, a way to climb and to conquer. It was disgusting and annoying. But Andrea didn’t look at you like that, no, she didn’t want what you could offer her, she wanted simple and complicated you, as long as you wanted her back. Those were the terms. Suddenly, albeit Andrea and you were both different individuals, with different wants and opinions - thank God, because you can’t stand a person who doesn’t speak their minds, although you won’t admit it - you two seemed to work as one. You ebbed, she flowed and vice versa. Caroline and Cassidy stopped asking you to come home earlier because, instead, Andrea was home. Andrea was home in every meaning of this sentence, and it was so easy to love her.

And quite impossible not to. People thought of you as the Sun, they orbited and evolved around you. But the Sun actually lived in Andrea’s face, gaze, smile. You never thought you would describe a person this way, unless said persons were your daughters, whose looks and personality compared to burning red flames. Your kids have the temperament of a fire, keeping up with them is like chasing will-o’-the-wisps. But Andrea is a warm cup of coffee, is arriving at a heated-house in December. Andrea’s eyes and hair are dark and dense as a rainforest, she can be just as dangerous and full of surprises, still you want to get deeper and deeper. You breathe her entirely.

You loved Andrea with every fiber in your soul, because it was beyond your choices. You choose everything for yourself, you don’t accept less than excellence, but somehow Andrea is so much more . You felt defeated for the first time in a long time, just on this occasion you didn’t even put up a fight. You didn’t stand a chance against Andrea. Once you realized this, you just vowed. You promised to your own self. Nobody makes you a fool, not even you, and you never appreciated denying what was right in front of your face, so what is the point in starting now?

You could vow to love Andrea if she stayed just like this. Heartwarming. If she kept your heart locked under seven keys inside her own. If her eyes kept shining with so much life and brightness that you had to keep your sunglasses on to stop the glow. If she laughed as you quipped about it – with a straight expression, of course – and as she took them off to kiss your whole face, because she just had to. Her glorious laughter. Her kisses sounded like camera flashes in your skin.

But people change as they grow older. Life hits you around the corner and, sometimes, it is unbeatable. You felt it in your bones, you know the feeling and you didn’t care that it happened to you, more melancholic that it is. Yet, you can’t stand watching this happen to your Andrea. It stings in your eyes, it makes you ache more than anything else in the world, more than seeing your girls leaving home. You know that they’ll be safe and, even from afar, you can make sure that they are alright. With Andrea, who shares a bed with you every night, you’re not so certain. You are not a woman to deny the undeniable, no, but this time, recognition almost kills you.

What can you do to fix it? You don’t like sitting and waiting. You like resolutions and answers. However, face it: this one is beyond your power. Let the ax fall and admit it.

And she seems so small, trapped in herself. She used to tower above you. How come you appear to be the one capable of embracing her with one arm only in the latest months? Her hands are loose next to her body. Rigid fingers. Her head hangs and her beautiful eyes are closed, staring at herself. That seems all she does lately even as she opens her eyelids, lost pupils, a black hole that swallowed each hint of light, not shining anymore. And she asks you this. Your Andrea. How is the person that you treasure most in the world able to dislike herself and to treat herself with so much disregard? Is it egotistical to ask this? To even think about yourself in a situation like this?

“I don’t even think I do”, she completes, drained, and it rips a gasp out of you.

Andrea changed. Not the Sun anymore. She’s another version of herself. She reminds you of a version of yourself that you once despised. However, Andrea taught you to love each part and each angle of you, even the ones you hid most out of mortification. Everybody wanted to be you, but you never understood the appeal, with the exception of when Andrea stood in front of you like a mirror and showed her beautiful details. If you saw them in a certain light, they looked like yours, and so she filled you with self-love.

And you can’t help but love, love, love. People are unpredictable, that you know of, but it doesn’t matter. You are not a fool. Don’t pretend you wouldn’t love Andrea even if the sky fell above her trees in the form of snow, or if her leaves and all her flowers had disappeared. Andrea wins you in a heartbeat. Andrea is one of the few people in the world who own your heartbeat. She makes it stronger. She makes you stronger even when she’s weak.

So, you approach her ghostly figure. You get on your knees and you help her out of her high heels, because your eyes need to be at an equal level as you lift her face to speak directly to the beast in them.

“If you can’t feel anything,” you say, “Then I’ll feel everything for the both of us. I’m not going anywhere. I promise.” She swallows and you have to keep going. “I love you because you didn’t give me a chance to do otherwise. That’s all. And I won’t accept questions or objections regarding this, Andrea.”

Her haunted gaze glimmers with contained tears as she opens her mouth, chin quivering.

“No one is going anywhere, Andrea.” You state.

Distant memories of Andrea turning her back on you comes to mind. All in the past, almost forgotten, you don’t linger anymore on those silly, meaningless events. But you won’t sustain a situation like that again, you won’t accept Andrea leaving again.

She knows all of this, because she’s both your best friend and the love of your life all in one. Andrea knows you better than anybody. That’s why all she does is give you a weak, understanding smile, even though both of you are aware this action requires loads of effort. Still so brave.

“I love you and our girls with every piece of me left.”

Comes in a tired whisper. As you bury a sob, she hides in your neck, not wanting to stare at herself anymore, and you do what you can and what you cannot do to embrace her with both of your arms, your whole body and your heartbeat. Her heartbeat. Still beating. 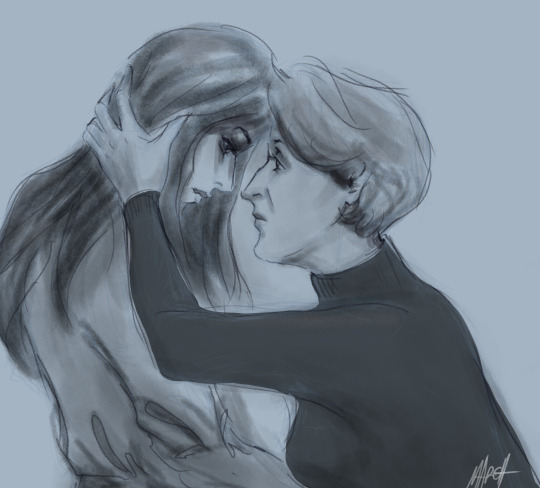 Art made by the amazing @angel_march (on Tumblr). 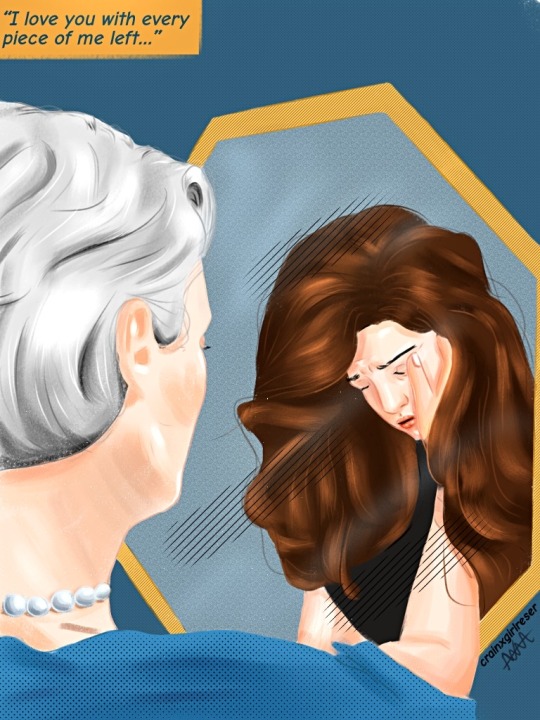