“It doesn't matter how it happened, Ron,” she whispered, "it matters how we deal with the consequences now.”

Look at the tags carefully before you read this. No graphic descriptions of anything.

Many thanks to lumosatnight who made the beautiful moodboard for this story! 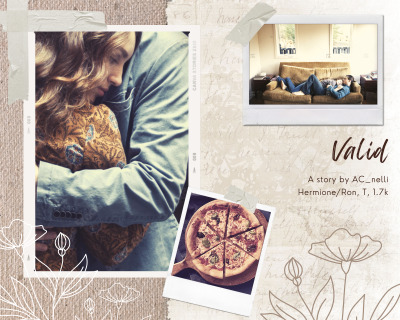 “Well, Ms Granger-Weasley, the results leave no doubt,” Healer McKinnon said as he looked up from his notes, “You are pregnant.”

He didn't congratulate her. Which Hermione always thought would be standard after receiving the news. Whether he never congratulated anyone or if he could see how much this wasn't a cause of celebration for her, didn't matter to Hermione. She just appreciated his reaction, glad that she wasn't forced to say something about it at all.

Hermione didn't hear much of anything the healer told her. An all-consuming buzz took over inside her head, drowning out not only everything around her, but also her own thoughts. Without realising it, she found herself outside of the hospital with two sheets of parchment in hand, the fresh air clearing her head enough to apparate home.

She had to talk to Ron. Preferably immediately and she thought about sending him a note through the floo to make him leave work but she decided against it. Maybe a few hours of solitude would help her to figure out what she wanted to tell Ron. Or rather, how she would tell him.

Hermione had no idea how Ron would react. No matter what he would say though, her decision would remain the same. Still, she dreaded this conversation as much as she wanted for Ron to finally come home.

She didn't want to keep it.

She knew this ever since she noticed her period missing, frantically flicking through her calendar to a few weeks prior, noticing that with all the stress at work then, this wasn't the first absence of her menstruation. Which usually was as punctual as herself. Not even 24 hours later she had gotten it confirmed by a healer.

The Prophet was still lying on the coffee table, the moving pictures of the front page catching her eye. She had read it already this morning, and therefore, the article about a group of people protesting in front of St. Mungo's. Hermione could recall the signs quite vividly, as they have all but manifested themselves behind her eyelids.

Every life is sacred!

These protests were nothing new, of course. But Hermione asked herself what cruel irony it must have been that the Prophet had chosen this day of all days to write something about it.

Ginny was pregnant with her and Harry's second child. Tears filled Hermione's eyes when she thought about the day they announced it to the family, Harry joking that if his friends would already hurry up, their children could go to Hogwarts together. What would they say if they knew that it would've been possible if Hermione would let the clump of cells inside her grow.

And then she thought about James, Ron's godson, who spent at least two Saturdays a month with them. Ron adored James just as much as the boy adored his godfather. Ron would be, and Hermione had no doubt about this, the best father a child could ask for. He was so good with children. Funny, loving, caring.

Before she could dwell on the thought, she heard the front door open and she wiped a quick hand over her eyes and wet cheeks.

“Hermione,” Ron's voice carried into the living room from the hallway, “are you home?”

“In here.” Hermione found herself surprised how steady her voice was.

“So, I met up with the guy from our travel agency during my lunch break today,” Ron continued talking while he got rid of the heavy Auror robes and boots, “and he said we should rather take the Portkey from Quebec to New York, and then…Hermione?”

Ron stopped with his ramblings about their planned trip to Chile as soon as he saw Hermione sitting on the sofa, looking at him with an unreadable expression on her face and without the usual book in her lap.

“Hermione, are you okay?”

He immediately rushed over to her, kneeling down in front of her before he took her hand. Ron's blue eyes were filled with worry, but he remained silent, waiting for her to talk to him.

To her surprise she didn't burst into tears again. She just waited, studying Ron's face to catch every single reaction.

He didn't say anything for what felt like several minutes. His eyes were wide from shock, his mouth opening and closing a few times as if he tried to find the right words.

“I'm not sure,” Hermione interrupted him, knowing the question already because she had asked this herself numerous times today, “Maybe I botched up the potion, using dried carrot greens instead of fresh ones or…”

She stopped her ramblings, forcing herself to look into Ron's eyes again.

Ron shook his head, his grip around her wrist tightening just a little.

“Last time I checked it takes two to get pregnant.” Ron said, a small smile escaping him before the worried frown was back again.

“I should've still performed the charm, just in case. I should've…”

Hermione caressed Ron's cheek, her thumb scratching over the stubble on his chin.

“It doesn't matter how it happened, Ron,” she whispered,”it matters how we deal with the consequences now.”

Ron swallowed several times before he spoke. “I could take George up on his offer and work for him. The way it's going right now, the shop certainly pays better than any ministry salary. Maybe if I write my notice today, I could…”

Suddenly, she couldn't speak anymore. All of her anxiety and frustration seemed to choke her, making it impossible to form coherent thoughts in her head, let alone a spoken sentence.

His voice was soft, barely audible.

This time, Hermione tightened her grip around Ron's hand, desperate to not lose the contact, the warmth and comfort of his touch, even though she still didn't know what he thought about her decision.

She shook her head, a single lock falling in front of her eyes. With a start, she noticed how his hand trembled when he tugged back the loose strand behind her ear.

The silence between them threatened to overwhelm Hermione, and just as she wanted to speak up, telling him all the reasons why she didn't want to go through with this pregnancy, he stood up again.

Without thinking, Hermione jumped up as well, her hand still clasped inside Ron's. He stepped a little closer as he cupped Hermione's cheek with his free hand.

“Can I ask you something?”

“Is it…,” Ron paused, taking a deep breath before he continued speaking, “is it because of me? Do I…are you…”

He pulled her closer, one arm at the small of her back, the other hand still cradling her cheek. His thumb traced along her jawline, his eyes set on hers.

“I swear I won't be mad if I'm the reason. I'm not exactly the most mature or organised man.”

“Sit down with me, will you?” Hermione entangled herself from Ron and led him towards their couch. They sat close, a comforting hand rubbed up and down her calf.

“We would be perfectly set for a baby, wouldn't we?” Hermione didn't give Ron the chance to comment on this. She wasn't sure anyway if she was talking to Ron or herself here.
“We both have good jobs, a house in a good neighborhood, families and friends who would support us, always. You're a natural with kids Ron and I couldn't imagine someone better to be a father. The reason…the reason why I don't want to have a baby yet is a simple one. I'm…selfish. I love what we have right now, Ron. The life we have together, our house, our jobs, the fact that we can do whatever we want and when we want it. I love that I have this privileged life and I love how I'm able to share it with my favorite person,” Hermione smiled at Ron, a mischievous glint in her eyes as she added, “And I love how I'm able to shag with you all over the place, without anyone interrupting.”

Ron laughed at this, squeezing her thigh. “From now on though with added protection charms cast before the fun starts.”

Hermione nodded, relief washing over her like summer rain.

“Maybe in one year, or two, or five, I might want to try for a baby. But right now, I'm not ready to become a mother. I'm not ready yet to change this life for good. And I know a baby doesn't suck out all the fun in life, but this decision still would change our lives forever. And the thought alone to be responsible for another person fills me with so much dread and anxiety, that I'm on the verge of a full blown panic attack.”

After a minute of silence Ron stood up again. He walked into the hallway, putting on his trainers and a jacket. Fear gripped onto her heart but before she could cry out his name, Ron was back, leaning down to kiss her. Short, but hard and intense.

Hermione watched him as he walked out the door.

An hour later, Hermione had taken a shower, changed into a pair of leggings and one of Ron's shirts, folded laundry, and was just preparing some tea, when Ron came back, a huge pizza box, a video and three books in hand.

They snuggled up on top of their couch, Hermione's favorite pizza sitting on the table in front of them, the movie Ron picked out, already put on.

Hermione looked at the books beside Ron, and a wave of affection washed over her when she read the titles, practically hearing him say ‘When in doubt…’ They were about safe options to get an abortion, about after care, and about different ways of protection.

For some silly reason, tears filled her eyes again as she pressed herself even closer against Ron, kissing his cheek. He turned towards her, letting his lips ghost over hers.

“Do you want me to join you tomorrow?”

Please keep in mind that our mental health is just as important as our physical health.

Find me on Tumblr.