Kyoshi told Rangi before to meet her at noon because she wants to give her a surprise. Yes, a surprise. A surprise shouldn't be told, sometimes Rangi thinks she really has rocks-for-brain but Rangi doesn't care. It is rare enough for Kyoshi to act like this and Rangi is so curious

Rangi wandered through the mansion's hall, looking for her avatar. Kyoshi told Rangi before to meet her at noon later because she wants to give her a surprise. Yes, a surprise. A surprise shouldn't be told, sometimes Rangi thinks she really has rocks-for-brain but Rangi doesn't care. It is rare enough for Kyoshi to act like this and Rangi is so curious. When she walked into the dining room, she saw Kirima sitting on the chair while drinking tea.

"Do you see Kyoshi?" Rangi asked.

Kirima put the glass on the table." I saw her not a long time ago. She was with Jinpa, but I don't know where she was gone."

"Ah, okay." Rangi continues to walk, now she is heading toward the main door. She guessed that Kyoshi and Jinpa is at the front yard. When she opened the door, she saw nothing more than an empty bare field. "Was she gone with Yingyong too?" Rangi asked with a louder voice to make sure Kirima hears that.

Somewhere not far from the mansion

Kyoshi and Jinpa standing on a wide carpet of grasses. Jinpa stands calmly, in contrast to Kyoshi who looks confused and seems childish.

"I swear your plan is good." Jinpa raised his both eyebrows.

"No, no.. I'm afraid Rangi won't like it enough!" Kyoshi thinking so hard about her idea to propose her firecracker today. Everything is already prepared. She chose an excellent and beautiful spot not far from the mansion, a golden ring with a piece of diamond, and some extraordinary ideas which including Jinpa.

"Kyoshi, you act so strangely."

"Ah, I know! I'm nervous! What if she denies me? I could burn myself to ashes."

"You know she loves you too. Don't overthink about that." Jinpa crossed his arms. "I don't mind if you want to practice with me again."

"I'm thinking about my action earlier. I'm so stupid that I told Rangi I want to give her a surprise today." Kyoshi pinched her nose bridge, imitating Rangi when she is frustrated.

"What can we do anymore? By the way, everything is already prepared."

"Okay." Kyoshi exhaled deeply. "I will practice it once again."

"Imagine me as Rangi." Jinpa walked toward Kyoshi, with one of his hands on his hip.  "What's up, honey?"

"Ew, don't... okay." Kyoshi exhaled. She fixes her posture and smiles confidently. "Can we spend time together here alone?"

"Sure." Jinpa then sits on the grass, followed by Kyoshi.

"Okay, I'll have some small talks and distract Rangi while you're making the texts on the sky."

Kyoshi shows her hidden ring box to Jinpa. "We have been in a long time together, through happy and hard times. I love you and I hope I can forever dedicate my life to you.  Will you marry me, Rangi?"

"Your voice vibrates. Repeat it once again." Jinpa commented. "Moreover, your words sound.... so plain. It is too straightforward!"

"Come on, it's not an easy thing to say loudly."

Kyoshi exhaled deeply, once again. "Rangi, we have been in a long time together, through happy and hard times. I love you and I hope I can forever dedicate my life to you. Will you marry me?"

That voice suddenly stops Kyoshi's heart. Kyoshi quickly hides the ring box in her pocket and turns around to see Rangi walking towards her and Jinpa. Kyoshi stands quickly and froze.

"What are you doing out here?" Rangi asked curiously and stares at them. Jinpa looks calm, but Kyoshi looks strange.

"We are discussing….?" This is so sudden and unplanned, Jinpa thinking so hard about the reason they are here. "... sky bison?"

Kyoshi sent a death glare to Jinpa for giving a stupid reason why they are here.

"Oh, okay?" Rangi raised one of her eyebrows, confused.

"Can I go to the bathroom, please?" Jinpa scratched her neck strangely. "I'm holding it for several minutes."

"Sure, I think I want to spend my time alone with Rangi."

Jinpa quickly walks away, back to the mansion to meet Yingyong and execute Kyoshi's plan. Now Kyoshi is alone with Rangi, although Rangi came outside the planned time, everything still working according to the plan. After some time of silence, Rangi sit on the grass which then followed by Kyoshi which sit beside her.

"I'm looking for you. You said you want to give me a surprise, didn't you?" Rangi raised both of her eyebrows slightly.

Kyoshi straightens her face to the wide sea of grass in front of them, with beautiful scenery of green lush forest and mountain range far ahead. "This is so beautiful, right?"

"Not as beautiful as a girl near me." Rangi flirted.

Kyoshi slightly blushed, but she smiled.

After a short silence, Kyoshi starts the conversation again.

"What do you think about... settled life?"

"We have been travelling everywhere, from nation to nation, keeping the world in balance. What do you think if we settle in one place to live peacefully?" Kyoshi looked at Rangi to see her reaction.

"Is that possible? It is your avatar's duty that keeps us travelling around the world."

"I don't know, I just... thinking about it." Kyoshi was slightly disappointed. She has been thinking about a peaceful life with Rangi, settled to one place to live together after they married to raise a family together. All of her dreams suddenly disappeared, knocked by the reality of their life that bounds to the avatar's duty.

"Are you tired?" Rangi asked.

"You told me you want to settle."

"I'm not tired of this, or even my avatar duty. I just hope we could live peacefully together where we could build our home." Kyoshi gives some honest words, enough to touch Rangi's heart. Kyoshi then smiled and lean her body slightly toward her. "Anyway, you're my home. I remember I always bring my home everywhere, that's why I never feel lost."

Rangi smiled softly and take one of Kyoshi's hands. She lifts it and kissed her healed scar with her lips. After some silence, Kyoshi just realised Jinpa was flying with Yingyong above and working to make some words up there to give Rangi a surprise.

"Sure. Szeto's festival will start next week."

"Well, I couldn't agree more." Rangi chuckled. "It's sunny and cool enough at the same time."

Kyoshi feels more confident about her proposal. Rangi wants settled life too? She must be dreaming! It is a sign that Rangi wants a life with commitment. After some time of little talks and laughs, Kyoshi realize that Jinpa has finished the word. She then exhaled deeply.

"Honey," Kyoshi called clearly. "Look." Kyoshi lifted her head to see the blue sky with some word-shaped clouds above. Rangi then looks at the sky too. She rounded her eyes.

Will you marry me? - Kyoshi

"Kyoshi… you...?" She looks at Kyoshi with her mouth slightly agape.

Kyoshi smiled and one of her hands takes one of Rangi's hands. Her other hand then shows the golden ring to her fire bender. The ring is so beautiful, it is a gold ring with a piece of diamond on it. The diamond is quite big and sparkling as the sunlight is reflected by its surface.  Kyoshi tries to stay calm and says everything with a clear voice.

"Rangi, we have been in a long time together, through happy and hard times. I love you... and I hope I can forever dedicate my life to you." Kyoshi inhaled before asking her the main question. "Will you marry me?"

Tears started to fall from Rangi's eyes. She smiled, she never felt so happy before. Rangi was expecting Kyoshi to gift her stuff she liked such as flowers or even a necklace. She never expects that Kyoshi would propose to her. This is more than she expected, more than Kyoshi's surprise she ever imagined.

Rangi then nodded. "Yes! Always will be yes!"

Kyoshi takes the ring from the box and then puts it on Rangi's finger carefully. It fits perfectly with her. Her finger looks more beautiful than ever. She lifts her hand and kisses it firmly.  Kyoshi's eyes hold so many tears, which make them look sparkling.  "Th... thank you.."  Her voice vibrates.

Rangi hugs Kyoshi into her arms. She never felt so happy as this, ever. It feels like the world centred on them, just two of them. Their fear of losing each other diminished, replaced by hopes and dreams of the future, together.

"So this is your surprise?" Rangi laughed in tears, still in the warm hug of her big oaf.

"Yes. I'm sorry I told you before. It should be more surprising if I didn't tell you."

"Do you know I have been waiting for this? But I don't know you would do it today."

Rangi releases Kyoshi and both of her hands firmly touch Kyoshi's cheeks. Her face starts to move toward Kyoshi and she kisses her lips passionately. They kissed several times before, but this kiss doesn't feel the same as any other kisses they have ever done. Both of them could feel a stronger feeling between them.

"I love you," Kyoshi said firmly.

"Then I love you more." Rangi smiled.

Bonus: Some time in the future ... 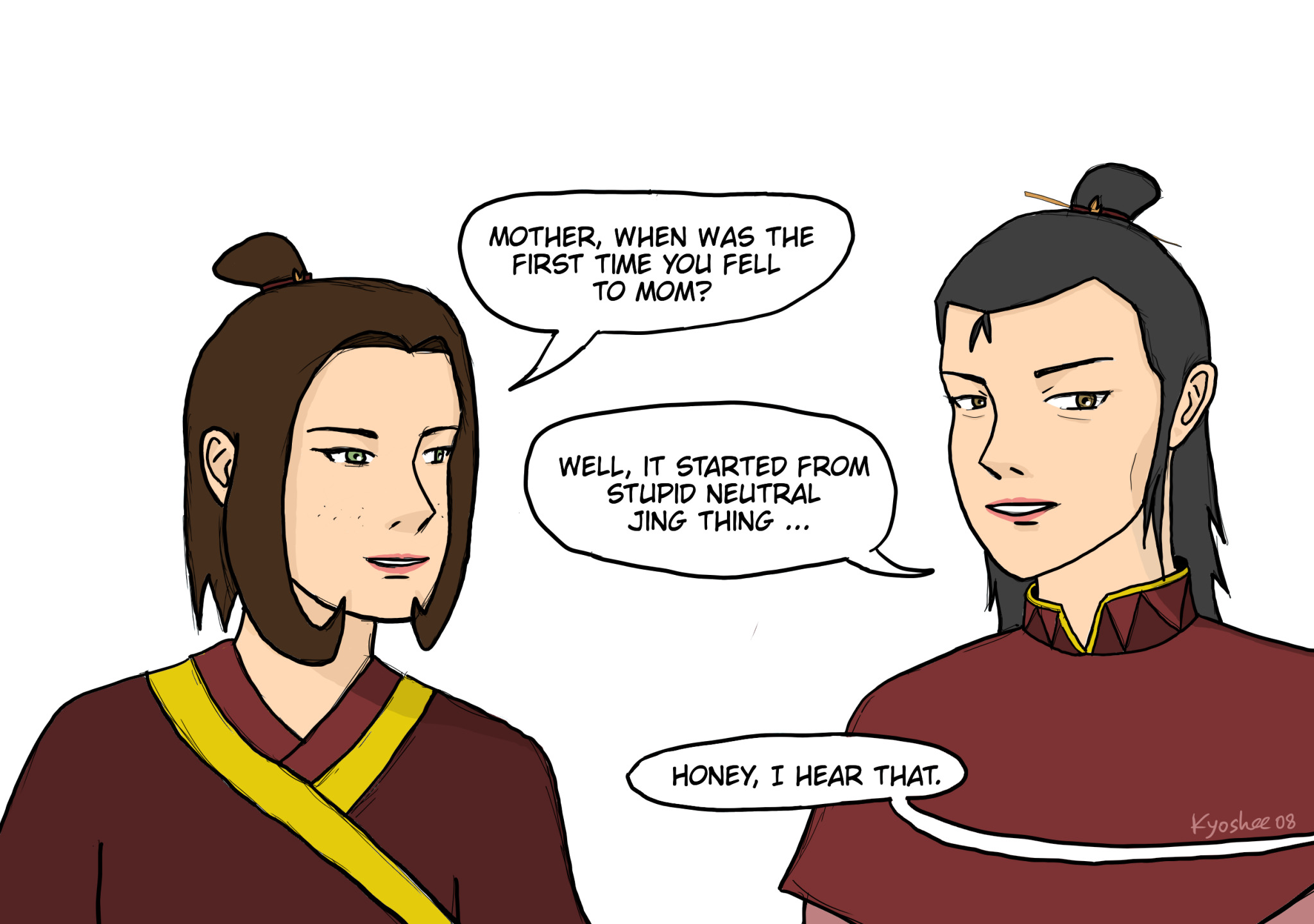 Hi! This is my first published fanfic. I have been worried about my grammar since my first language is not English. Anyway, thanks for reading and I hope you enjoy it!