In the middle of the battle against Lex and Nyxly, Kara can't help but blurt out a question.

This was a twitter prompt, sort of. From this little discussion. I posted it there and on tumblr, but I decided to polish it a little more and publish it here, aswell. I'm not procrastinating writing my other fic, not at all.

Thank you to Luke and Wadi, for the idea that wouldn't leave me alone until I wrote it.

This takes place in that finale battle against Lex and Nyxly, obviously. Enjoy. 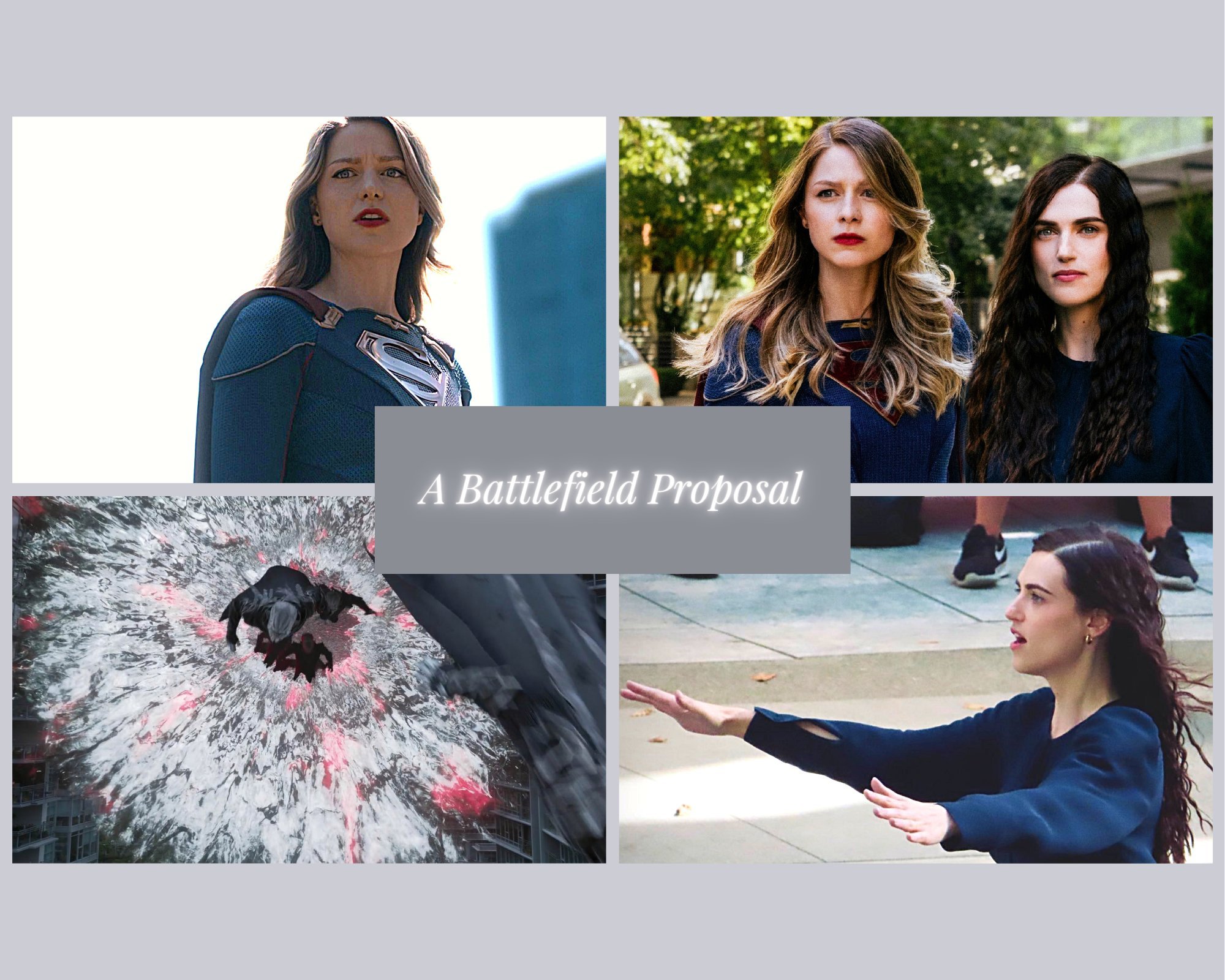 Kara’s overwhelmed. That's her main feeling at the moment. Because there are phantoms everywhere, but at least now she has the full extent of her powers, and her family fighting by her side, but… they are freaking everywhere and they keep coming from the portal Lex opened to the Phantom Zone, hovering in the middle of the sky, downtown National City.

From her position on the sky, she can see that Alex has conjured a backpack that looks suspiciously like the vacuum that Luigi uses in the old Luigi Mansion Nintendo game they used to play. And is literally catching phantoms, like in Ghostbusters .

Nia’s keeping a dream shield with one hand and a dream sword on the other, fighting a couple of phantoms. Kelly’s in a defensive position, protecting the few civilians around.

Brainy and J'onn are both close by, also in the sky, trying to keep more phantoms away, far from the team in the ground.

She's aware that James, Mon-El and Winn are there, somewhere, but she can't see them. She hopes that they're okay.

And Lena… Brave, beautiful, wonderful Lena is front and center, in the middle of the street, her hands raised, murmuring words Kara doesn't quite understand but the Phantoms, one by one, get surrounded by some ethereal white dusty light and simply disappear. Her eyes, however, are fixed on her brother, who stands with Nyxly a few blocks away. Pity and rage reflected on Lena’s green eyes.

Kara uses her heat vision on a couple of phantoms close to Lena and that Shadow person, who keeps guard next to her best friend (Lena had assured her that, whoever she was, was on their side) and landed next to her.

"Do you think you can close that portal?" She asks.

"Not with magic, no," Lena easily answers "but maybe I can–" she stops talking mid sentence and raises one hand to their left where a phantom had appeared without Kara noticing, so focused on Lena she didn’t even hear it. Lena whispered a few words and the phantom simply turned around and went to attack the other Luthor on the scene. And Kara was just overwhelmed once again, but for a completely different reason.

"Maybe I could shield our friends and the Legion, then the phantoms would latch on to Lex and Nyxly's fear," Lena said, and her face said to Kara that that was exactly what she had done seconds earlier.

There were so many phantoms now, as Kara looked around them, and they kept coming from the portal. There are a few that have formed a circle around them. The shadow had disappeared, once Kara had landed next to Lena, and Kara's senses were just overwhelmed by Lena, and her brilliance, and her selflessness, and her need to protect her and their friends, and her beauty, and how could Kara had been so blind for so long, trying to keep her away?

Lena raises her hands again, but Kara beats her to it, using her freeze breath against the enemies close to them.

"Hey, Lena," she says to her best friend, once the phantoms were contained in ice, and when Lena looks at her and for a second Kara is breathless before simply asking, "Marry me?"

Lena is silent for a moment, like repeating the question on her mind, like making sure she didn’t hear wrong, and then the biggest most beautiful smile Kara had ever seen, blossoms in her face.

"In the middle of a literal battlefield Kara, really?"

And Lena moves her hands again, and if they were phantoms near them they are really far now, not gone, but far enough for them to have a conversation. Kara shrugs and smiles at Lena.

"You know, a Luthor and a Super, it was never going to be a calm and collected proposal."

"Aren't you jumping a few steps ahead? We're not even dating or anything," Lena says, that last part sounding like something between a grumble and a tease.

"If you wanna get technical, we've been living together for the past six weeks," Kara answers, taking a defensive stance again, as their respite was over and a dozen more phantoms were closing in on them, "You don't have to answer right now, but I know what I want and now you know it too, but I can ask again later, when we survive this. I can get down on one knee, if you prefer to keep it human and traditional. I can get a ring, and the flowers and take you to a fancy restaurant or to the beach, that's romantic, right? No, wait, you hate the beach. I would personally prefer the fortress, a little piece of home, but you would probably freeze in there. Home could also be Midvale, I guess, but that's also a beach and beaches are not your thing. I would offer to fly us to Newfoundland, but for what you told me they were assholes to you, and I will probably punch someone if they were rude to you again…"

"J'onn! Hey, J'onn" Lena screams suddenly, and okay maybe Kara was rambling but there was no immediate danger for Lena to be screaming at J'onn for help, and– "J'onn, marry us."

Oh, okay, yes. She had asked that.

"I'm a little busy at the moment," J'onn is literally in the sky, battling a horde of phantoms in his full martian manhunter form, and yes, maybe Kara should've thought of a better moment and place to ask her soulmate to marry her, but she's known for her impulsive decisions, and Lena had said yes, right? Or… or something like it.

Kara finally looks at her best friend, the person she wants to share the rest of her life with, and the smile that she gets in return is just breathtaking, otherworldly, indescribable.

"Okay, so first we get rid of the phantoms, my brother and your friend Nyxly, and then we can get married. I would like it if we do something kryptonian too. So you can get that piece of home, if you’d like that," Lena says. Like that's just one lap around the park on a sunny day. And Kara's priorities might be a little out of whack, because she just surges forward and kisses Lena, short and sweet. In the middle of the street, in front of everyone, in full Supergirl get up, and somehow they would have to mind wipe anyone that saw them, but that's a problem for later.

"Deal," She smiles at Lena, "So what's the plan? And can it include telling you brother that you'll marry a Super?"