Audio and video coming hopefully within a reasonable length of time. 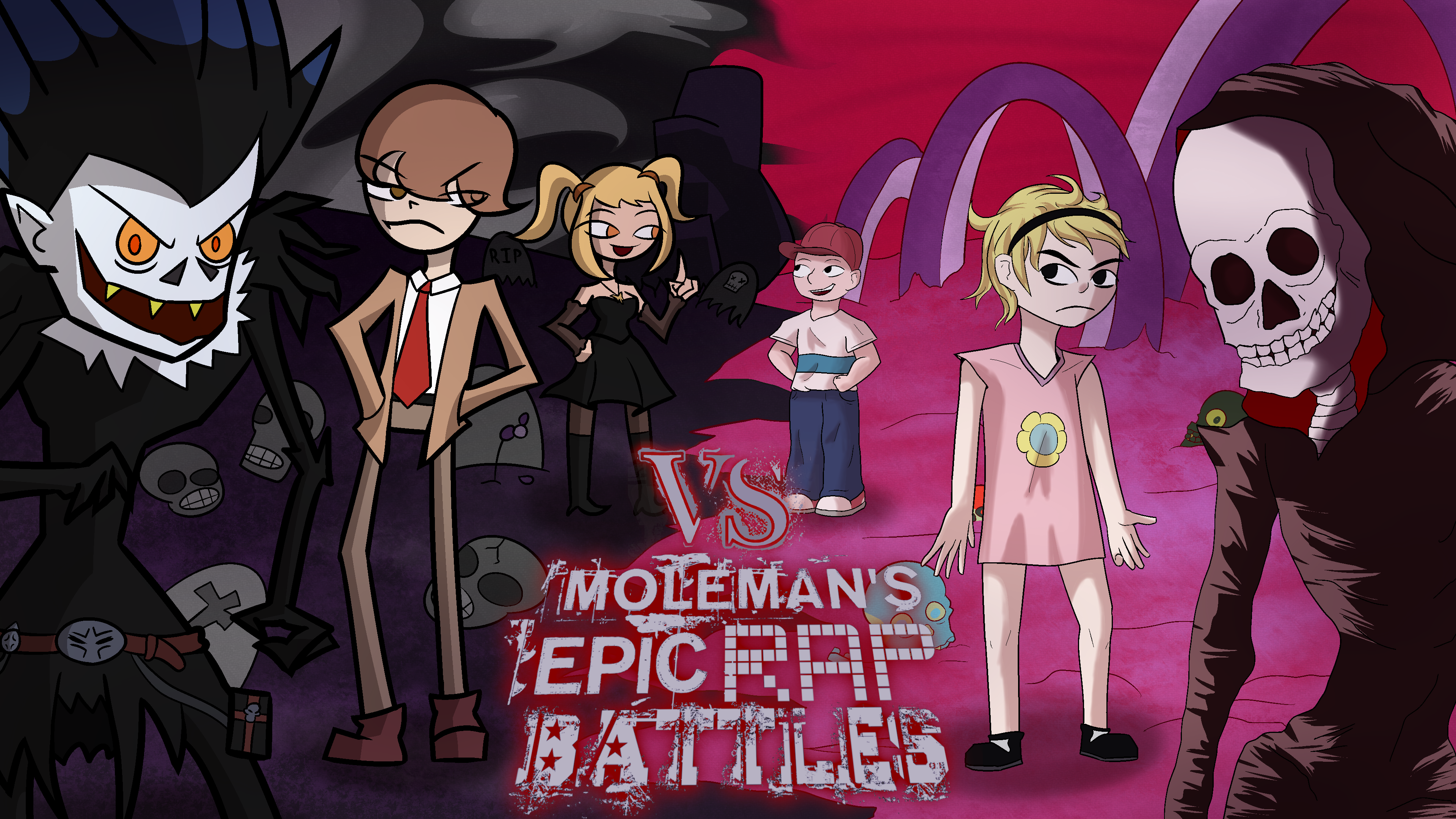 Ryuk:
What’s up; you’re testing me to find the smoother silencer of life:
Out to decide whether the pen is truly mightier than the scythe?
The shit I drop is known to devastate; these rhymes will follow suit.
I play for keeps with cheaper reapers, all while high on knowledge-fruit!
Hey, subjugated sucker, don’t you fancy rapper-war between us!
You’re piss-poor as your punk Potter pastiche: can’t perform for peanuts;
You’re a prophesied, born loser. I’m a breathing time-reducer,
Killing silently; call me a ninja: Ryuk Hayabusa!
You’re a ripoff of a spoof whose bogus journeys can’t stand up to this;
Your lines will roll out deader on arrival still than Underfist!
The network picking you and nixing Evil was insane,
When Hector had more meat than your bare bones, and he was just a brain!
I sow discord-seeds, easily outpacing your blonde bimbo’s schtick;
You saw the bar sink to as low a place as any limbo stick!
It’s adult swim, and you’re in deep; your reference pools are far too shallow,
And we’re playing by my rulebook: a lesson fools find hard to swallow!

Grim:
Surely, you’d need a rulebook to understand such simple systems,
Mimicking some Twilight cover with that apple-symbolism.
Gangly, Glasgow-grinning, cross-eyed chump; you know not what you’re vying with.
You could say I’m like Donald Trump: your power? I ain’t buying it!
I’ll beat a lazy, laughable pretender something bloody;
Dwarf him in no-holds-barred battle, free of interrupting gunnies.
When I deal with jacked up jokers, making heads roll is my sole aim,
And this track is like Jump Force: what you present’s all show and no game!
You’re a shitty dummy in an ugly land of wretched rubbish;
Ohba truly must have been a Luckyman to get you published.
Ask my graduating class if I’m the showier soul-taker;
Mastered my craft’s active practice, while yours only works on paper.
I go fast in verbal warzones; flow together seamless words,
And unlike Maximum the Hormone’s, I won’t let them be misheard.
As I face down Dafoe before me and dismiss his petty threats,
Your number’s up like ol’ Thromnambular; you’ll wish we’d never met!

Ryuk:
Return to public service, nursing your third-person Dracula;
You’re turning verses wacker worse than Irwin’s cursed vernacular!
In fact, your antics rather bore me, so I’m thinking that the best thing
Is to add a human touch, and see if things get interesting…
Light Yagami: Kira’s dishing out sheer heart attacks, and that’s no JoJo reference,
But no name need factor here to drop your ass in forty seconds.
Tepid weapon subpar in people-ending regards,
Take after General Skarr, and keep to tending the yard!
My every act is planned exactly; can’t hijack me! I’m a mastermind:
The bastard-massacre-enacting by contrived disaster kind;
Harass attackers’ casket sites to maniacal laughter kind,
Who axes hacks broadcasted. You’re a has-been in a hamster-bind!
You’re obsolete; that, no A.I.’s required to discern.
My win’s a lock; try cracking it, and play with fire? You’ll get burned!
Your rotten raps have stained this song, and I alone can do it justice;
Know what I do in the dark lights up the new world when I bust it!
I’m a nature-force, initiating fatal repercussions:
Out there dropping flimsy bitch inept naysayers by the dozen;
Even write off lowlife louts while under enemy surveillance!
Not to fear you takes no cowbell as a remedy for ailments.

Grim:
Never have I seen a snake so low regarded as a savior;
It’s health-hazardous, subtracting years from folks for bad behavior.
For a mortal sort of horror-lord, your evil’s far-outclassed;
I hence step back to let the master go medieval on your-
Mandy: Assholes dicking with third-hand dark artifacts who’ve felled twelfth-letter fellows
Ought to know they’re out of luck; this thirteenth’s anything but mellow.
Your worst nightmare says hello: I’ll crush you like I snuff romance;
The cruelest kid is at your door, so hold on to your lucky pants!
Quit tripping with potato chips; why don’t you take a tip and shove it?
An albino Aspie played your Sperg ass like a finger puppet.
Any fool who took your tool could trigger magical fatalities;
My sheer displays of talent rip the fabric of reality!
From here to Hell and back, I’ve not beheld “gods” so pathetic:
Talking “justice” this and “new world” that, it’s honestly hilarious,
But spare me tricks; I’ve more on hand than Delgado’s prosthetic.
You’re as screwed as if Naomi’d brought along a second alias!
Voltaire was making common sense less common, leaving vegetables,
Until he found my mind’s contents too hot to be digestible!
You face a darkness-daughter who’s spectacularly spitting it,
And taking harder shots at you than Matsuda, you idiot!

Misa Amane:
Be careful what you do, you little brat; attack my man?
It’s Endsville for you, all according to keikaku!
Light: That means plan.
Misa: A hottie yandere to add onto the weight of Kira’s ante;
Promptly gonna lay the smack on you like “Buenos dias, Mandy!”
This devout keeper of secrets rocks consistent fancy flows;
You’re a mouth-breather whose street cred’s nonexistent as your nose!
I’ve got your number, and guess what? It’s up; comeuppance is approaching, kid:
I crumble so-called gods to dust without so much as knowing it!
Light: Your quotes for cold show-openings will all sink to irrelevance
Amid the void of utter blackness I’ll see you enveloped in,
And it’s an elephant that simply has to be addressed:
I’m judge and executioner, to which your jury can attest!
Fred Fredburger: YES!
Light: You’re messing with a force too dope for either side of Heaven;
Getting coaxed into a worse Snafu than Bleedman’s Nine-Eleven!
Misa: Maybe he was on to something, though, from what I can decipher,
‘Cause you’ve got about as much lyrical clarity as Viper!

Mandy:
Put a gag in it and go get bent; don’t try to get the best of me:
I see through you at no expense to my lifetime expectancy!
I quite prefer to fight alone; the right to rule is mine alone,
But he can humor harlot Harley here…
Billy: Please pass the microphone…
Raggle fraggle, motherfucker! Nobody can help you now;
My battle-anger is the udder-most seen since the milk-box cow!
I’m unafraid of double-dealing clowns with heads of putrid steak sauce,
Putting borrowed time to waste and down for getting used as play props!
Watching you, these eyes have stayed locked, though I’m anything but Gelus.
Kill yourself, and show it this time, so your author needn’t tell us!
Roasting Raito with Byronic tongue in play, I’m being candid:
You should take that pen and spill some blood the way your right-hand man did; planted it!
Mandy: Your batshit wish would drive our wretched race kaput…
Billy: Destroy us all!
Mandy: …But after this, your final destination’s moot!
Billy:  Destroy your soul!
Mandy: The crap Netflix did with your schtick was worth a laugh,
But in our match of wits, I’m literally splitting you in half!

Light Yagami:
That’s ample blabber from Invader Zim and Gaz the proto-doomer,
Spewing trash-talk cheesier than when they had you going lunar!
Misa: Not the doormat the eight-legged son you want to squash to death is,
I may have a quarter-life, but you face full-life consequences!

Billy:
Gaga wenches don’t know nothing! All your schemes are wholly nuts;
For maximum name-based destruction, simply scream “Lord Moldybutt”!
Mandy: Your global bid for an alleged better place got pretty far,
Until you joined the Death Parade, without the grace of MCR!
The rewrite saw you reborn? Cool; upgrading to hot temperatures,
I’ll stick meanwhile to taking pages straight from Dune’s God Emperor!
You’ve lost, so get it trepanated through your thick head, understood:
This bout’s one memory I’d say you’ll want to get rid of for good.

Light Yagami:
Look: you’re a miniature Daria who thinks she’s Damien,
And takes on tainted saints and socially inept Mesopotamians;
Your cockiness paints you a bigger Mary Sue than Poppins is,
But notwithstanding all of this, it’s absolutely obvious that-
Fred Fredburger: I have to make poo poo!