Having a Cat Isn't All Fun

Having a cat was a lot to handle. Adora thought she did a pretty good job but sometimes it was just hectic. 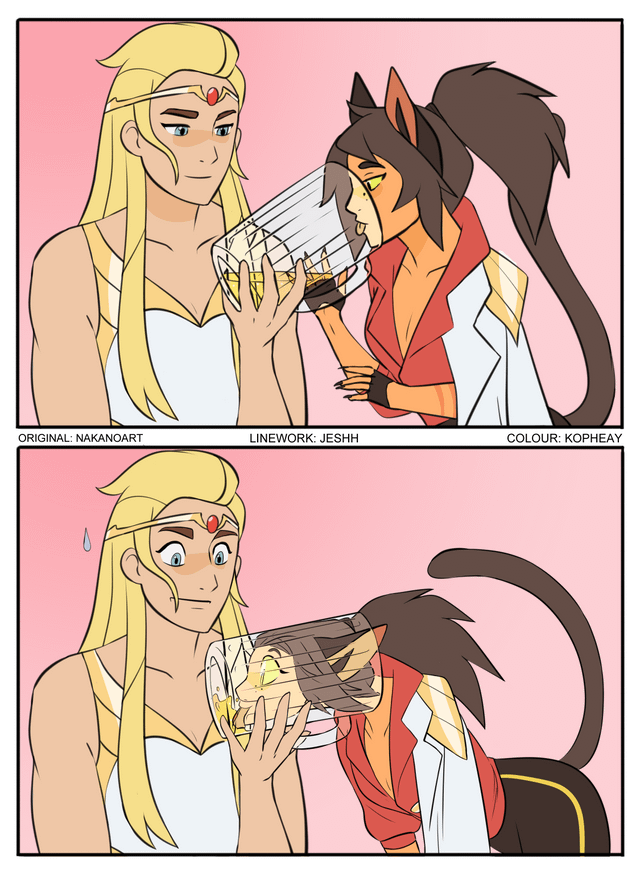 Having a cat was a lot to handle. Adora thought she did a pretty good job but sometimes it was just hectic.

Cats need a lot of attention.

In one instance Adora had sighed and sat down on the couch. She has pulled in a dozen different directions all day so it was nice for her to get a break.

She stretched her arms out on the back of the couch. She turned her head and spotted a book. Adora leaned over and picked it off the couch. She settled it into her lap and started to read it.

Two hours later Adora was on the edge of her seat with the daring romance that was Ruby and Velvet. Velvet took Ruby’s hand and-

Catra’s head was in the middle of the page.

Adora looked up, her face set in annoyance.

Adora sighed. “Catra what is it?”

Catra squirmed until she was curled in Adora’s lap looking at her. Right over Adora’s book.

Catra had weird eating habits too. On a nice morning, Adora and Catra were cleaning up after breakfast. It was their turn to do it. Bow and Glimmer had done it yesterday, and now they were playing with Finn in the garden.

Adora took it and looked at it. “Oh!” She said in surprise. “There’s some left.”

Catra put the other plates she was carrying down. “There is?”

Adora held out the pitcher for Catra to take. Catra put her hand on the side and tipped it towards her face with her tongue out.

She’s so cute. I love her, Adora thought.

Catra leaned forward and stuck her head into the pitcher with her tongue sticking straight out.

She does have her moments,” Adora decided as she watched Catra lap up the rest of the juice.

Cats liked breaking things. Especially at night. This wasn’t as much of a problem when it was just Catra.

A loud crash jolted Adora awake. She shot up from her bed and pulled her sword out as she ran for the lights.

When she flicked them on she sighed. She put her sword away in disappointment. Not at the lack of an intruder, but at the fact that her wife, child, and space cat were tearing up her bedroom.

“H-hey Adora,” Catra said. She was ripping her claws through the window curtains.

“Mommy!” Finn giggled. They had thrown Catra’s potted plants across the room. The terra-cotta pots had shattered and now there was dirt and plants across her floor. That Melog just had to walk through.

Adora stepped over the shards on the floor and went to her one-year-old.

Adora watched as Melog was trapped behind the weapons he had walked over. Adora picked up Finn just as Melog shifted into the small floating lights to escape from the self-made prison.

Adora placed Finn into their crib. She went over to the closet and grabbed the broom. She shoved it into Catra’s hands and went back to her own bed.

Adora laid down and willed the mess to go away.

Catra was constantly bumping her head into Adora.

She didn’t mind, since she had grown up with it, but she could see how the others found it weird.

Glimmer was especially disturbed when during a meeting, Catra turned her head and nuzzled where Adora’s shoulder met her neck. Adora just put her hand on Catra’s head and continued what she was saying.

Frosta had watched Catra bump her head into Adora’s back when Adora was trying to have a conversation with Perfuma.

“What is she doing?” Frosta had exclaimed.

“Oh it’s…” Adora hadn’t known how to explain Catra’s behaviors. She never had to before. “It’s a Catra thing?”

“And to think she was beating us!” Frosta shouted as she walked away.

Catra loved to give gifts to Adora too.

“Catra!” Adora shouted that she saw a dead bird on her pillow.

“Catra,” Adora said when she saw a wilted flower on her seat in the war room.

“Catra…” Adora sighed when she saw the old rag on her chair.

But it wasn’t all bad.

“Aw, Catra,” Adora said when she saw the necklace Catra bought her.

“I love you,” was Adora’s response when Catra gifted her a new knife.

“You’re amazing. I love you so much Catra,” was what Adora said after Catra gave her the gift of their child.

Catra got overwhelmed a lot. It was important for her to have a safe space to go to when her PTSD and flashbacks became too much for her.

These were her “small safes” as Adora liked to call them.

Whenever Catra felt like she was about to have a panic attack or flashback, she would go and squeeze herself into the nearest small space.

Sometimes it was under the bed.

Or in a cabinet in the kitchen.

Or in the trunk of the tree.

It was often an alcove in the wall.

Or most often, Adora’s arms.

Catra would squeeze herself into a small space so she could be protected and small. And when Adora was there when it happened, she sat and waited until Catra calmed down enough to know that Adora was only there to help her.