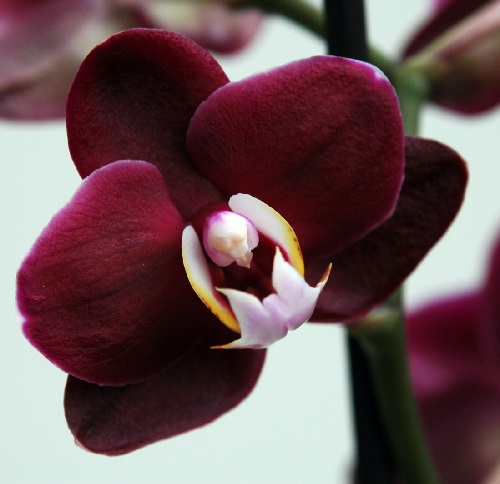 Jamie pulled out the last orchid from his bag. It was a beautiful burgundy color, as though dyed with a rich red wine. He’d saved it for the night, wanting to see it against Claire’s pale skin in the moonlight.

They had just finished dinner, ordering in, of course, because they couldn’t be bothered to put on more clothes than his white shirt for her and his own pants for himself. He liked her body wrapped up in his things.

As she was in the kitchen refilling their drinks, Jamie searched his brain for another poem to fit the occasion. Something sensual, like the orchid in his hands. Something pleasant and whimsical, complimenting the lightness in his heart.

He flipped the switch to turn on the fireplace, less for warmth and more for ambiance. He dimmed the rest of the lights and waited for Claire to return, hiding the orchid behind a stack of books on the side table.

She came with a drink in each hand and the same smile on her face that had been there all day. “Here you are.” She handed him his glass.

“Thank ye.” He sat on the sofa that faced the large widow to catch a glimpse of the night sky. His arm spread wide to invite Claire in next to him. She snuggled into his side, curling her legs up and melting into him.

“Sláinte,” he toasted, clinking their glasses together and taking a sip of a damn fine single malt whisky.

“Oh, nonsense. The amount of money you’ve spent on flowers and gifts and meals and such, you’d better allow me this one thing.”

“Speaking of flowers…” He set his glass aside and picked up the orchid, presenting it to her in his palm. He whispered softly in her ear as her cold little hand scooped it up to inspect it in the flickering firelight.

“It’s no’ black. It’s a deep burgundy. It only looks so here in the dark.”

She cupped it in her hand like it was a precious gemstone, and she looked up at him with her whisky eyes illuminated by firelight. “Carpe noctem? Seize the night?”

“Aye, and all the pleasures that accompany it.”

She finished her drink like it was merely a shot and tossed her glass aside. It clunked noisily on the rug, but luckily, didn’t shatter. Jamie’s brows lifted in surprise as she climbed on top of him. She placed a finger beneath his glass and guided it to his lips. Only this particular Sassenach could have the power to make him guzzle down a perfectly elegant Scotch—one meant to be savored—like it was a shot of Cuervo at a Coachella concert.

He set the glass aside when it was empty, fearful she wouldn’t be so lucky with a second toss and avoiding the potential for having to pick shards of glass out of their knees after he fucked her on the floor.

She pulled off his shirt and pressed her naked body against him, finding his mouth in the space of a whisky-scented breath. For a moment, he thought she was intent on riding his cock again, but when he lifted his hips to drop his pants, she slid over and mounted one of his thighs. Her hot, went cunt slid back and forth on his hard muscle, and her breasts rubbed against his chest.

He let her use him, loving the sounds she made as she sucked deeply on his tongue. His hands gripped her arse, helping her keep rhythm as she grinded down again and again. Her knee put an uncomfortable pressure on his balls, but by no means would he interrupt her ride over a couple of smashed testicles.

He relished the way she dragged her clit along his leg, slick arousal removing any resistance from his skin. Her uninhibited enthusiasm in the ride was one of the most life-affirming experiences he'd ever witnessed.

Claire’s grip on his neck tightened, and her hips thrust forward. Her back curved sharply, every muscle rock solid. She let out a moaning shriek from the back of her throat that made him want to swallow her whole. He held her tight arse in his hands, pulling her firmly against him to drag out her climax as long as it could possibly last.

Her release of tension when she settled had her curves molding fluidly to his body, save the random head-to-toe quiver from lingering climax.

“Mmhm,” she mumbled dreamily. “Carpe noctem, and all that.”

“Aye. Ye seized up just fine,” he gave her arse a firm slap, making her jump and squeak, “and I intend to do something of the sort myself.”

The way she rolled her hips and moaned deep in her throat told him she was looking forward to it. He spanked her bum again and said, “On your knees, a nighean.”

She met his gaze seductively as she slid down off his leg to the floor. She turned and crawled forward a few paces, dropping her face to the soft rug in front of the fireplace and perching her arse high in the air.

“Bloody hell,” Jamie groaned as he stroked his cock and stared at the most perfect sight in existence: Claire’s fat, round arse wiggling back and forth, waiting for him to have his way. He could see her holes, one dark and round, beckoning him illicitly, and the other dripping wet, hidden poorly between her spread lips.

He sank to his knees and maneuvered between her legs, gripping his cock to trace down the line of her arse to her cunt. He wasted no time pushing inside. When he was buried deep enough to feel her bum against his pelvis, her pussy squeezing him pleasantly, he ran a finger over her arsehole and said:

“Before I finished speaking, she said Yes.
Emboldened, I then blushed a bit, and laughed,
And asked for something even dirtier.
The lusty wench agreed without a blink.”

Jamie pushed his finger inside and relished her shriek.

“Do it now,” she demanded, “and don’t you fucking be gentle.”

He hauled back his hips and hammered into her, reveling in the grunt she made with the force of his thrust. He repeated it again and again until he was the one making most of the sounds.

She reached her hands back so he could grab them, and he pulled them up to the small of her back. He bound her wrists in a tight grip and used them as an anchor to slam inside all the harder. He fucked her roughly, resigned to the inevitability of impending climax. He wished he could drag it out longer, but fucking against her meaty bottom was driving his cock mad.

Just as he picked up speed, nearing his release, her legs began sliding apart, growing weaker without the use of her hands. As her bum dropped with her legs, his momentum slowed, and he could hardly reach her pussy, much less fuck the daylights out of it.

He released her hands so she could hold herself up and lifted her by the hips to align her cunt with his cock. “Ye all right, Sassenach?" he said, pushing in again. "Ye’re slipping around like Bambi on ice.”

She snorted, her laughter squeezing his cock pleasantly.

“Stop it!” she laughed, reaching back to smack his thigh.

“Oh, my beautiful, wee doe. Shall I take ye out to the meadow to find yer footing?"

"I'm perfectly stable now that I have my hands back again, thank you very much."

"I like ye fine on all fours, lass. Ye’ve got me gantin for it like a buck in ruttin’ season.”

“Just watch where you stick your horns.”

“Oh, aye. I intend to watch, indeed.” He grabbed the fat of her hips, knowing perfectly well why they were called love handles, and yanked her into him as he smacked against her arse with his hips. Pleasure sparked with every clash of their bodies, and soon, he was thrusting so fast he was no longer slamming into her, but moving mere inches back and forth. His balls rose up and his belly clenched just before the blast of pleasure shook his entire body.

His cock felt like a fucking geyser, erupting deep in her cunt, though he knew it was only a wee bit of spunk. He relished the image of little bits of himself lingering around Claire’s pussy long after he left her bed.

It was then he realized they’d forgotten a condom. The thought—and all its possible consequences—didn’t bother him in the slightest. By the way Claire hummed pleasantly and waggled her bum against his pelvis, she didn’t seem all that distressed about it either.

“Carpe that arse,” she said, chuckling with her face still on the floor, mass of brown curls hiding her smiles.

Jamie bent over her, wrapping his arms around her body as her legs gave way. His cock slipped out of her pussy a little sooner than he’d wished, but he lay on top of her, pressing gently it between her buttocks as it slowly began to soften.

“I could do that every day for the rest of my life and never tire of it,” he said, nuzzling into the back of her neck.

“Good.” She turned in his arms to look at him. “I'll expect you to do just that, or something of the sort, as often as your body will allow.”

He kissed her nose and smiled warmly, accepting her invitation with wordless joy.

“You’ll stay the night, won’t you?” she asked, eyes pleading. “I want to fall asleep in your arms.”

Jamie briefly thought of the audio recordings of the potential narrators he was meant to be listening to over the weekend, but immediately cast the thought aside.  Carpe noctem, for fuck’s sake.

“Of course, lass. I’ll stay for as long as ye want me here.”

“Do you think it’ll ever stop? The wanting?”

“Dear God, I bloody hope not.”

He kissed her soundly before rising up off the floor to help her to her feet. Her resemblance to a wee doe was all the more apparent as her legs wobbled upon standing.

He ensured she was steady before moving to the sofa to retrieve her orchid. She led him back to the bedroom to add the blossom to the rest of her collection that littered the unmade bed. "It's no' a bed of roses, but I suppose it will do," he said.

They lay over the flowers, entwining their bodies and beginning their long delectable kisses goodnight. Claire pulled her mouth away briefly, only to say, "Thank you, darling, for the best first date I've ever had."

"Seeing as how it'll be yer last, I thought it necessary to make it special."

A part of him always worried he'd scare her off whenever he gave her a glimpse of the depth of his affection. Yet all she did was smile and kiss him again. She had to know that would only encourage him, and still her hands ran down the slope of his back and settled on his bum as she licked the soft underside of his tongue.

He pulled her tightly against him and joined in her tongue's playful dance, thinking it was a far better thing to do on a Saturday night than listen to a bunch of blokes butcher the reading of his tale.