On a seemingly mundane day at the library, Claire comes into work to find a note and a flower awaiting her on her desk. It appears to be written by a secret admirer. Her husband, Frank, has recently informed her of his desire for a divorce, and heart still raw and vulnerable, she is taken off guard by these particular attentions. Claire soon realizes there may be more depth of affection in the posies and poems than she initially considered. 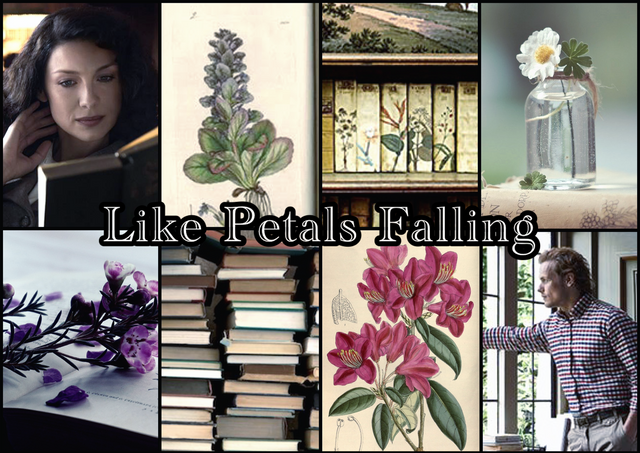 This story was inspired by a handful of poems I read (and reread) recently. In each one of them, I saw Jamie and Claire, and I knew that if Jamie was reading these poems, he, too, would see her in all of these beautiful words.

Chapter 1: The Breath We Took When We First Met 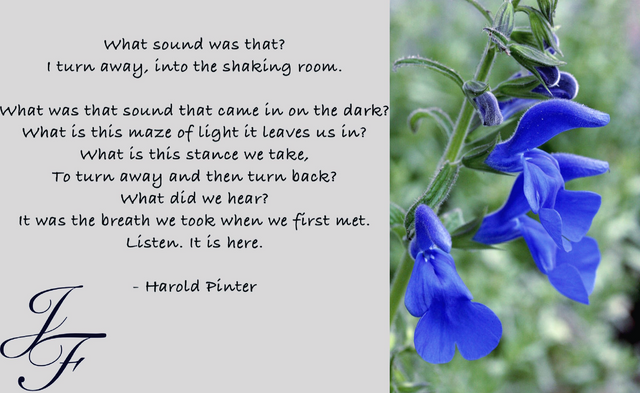 What sound was that?
I turn away, into the shaking room.

What was that sound that came in on the dark?
What is this maze of light it leaves us in?
What is the stance we take, to turn away and then turn back?
What did we hear?
It was the breath we took when we first met.
Listen. It is here.

The poem was scratched down on a fine bit of stationery with the initials JF embossed in the corner. The untidy scrawl didn’t appear to be intentionally or even carelessly messy. In fact, it seemed as though the writer made a noticeable effort to ensure their words were somewhat readable but had never been disposed to calligraphic letter formation—or at the very least, basic legibility—prior to setting pen to paper. The result was a barely decipherable script from a presumably masculine hand.

The flower that accompanied the note—blue salvia—had a long stem with a half dozen azure blossoms sprouting from top to bottom. The fragrance was strong for a little plant, and it filled the air with a pleasant herbaceous scent.

He set his bag down on his desk with a sigh of relief and peered across the office to see what I was referring to. “Is that a weed?” He snorted and settled into his seat. “Lady Jane, if I go through the hassle of giving a woman flowers, I make sure they don’t look like they were snagged off the side of the road.”

I smiled and looked down at the little thing once again. It wouldn’t appear like much to most people, but I had a fondness for plants, and I knew blue sage didn’t just grow randomly around Boston for passersby to pick at their whim. Someone either grew it themselves or went through a bit of trouble to find it.

I lifted the poem to read it again a few more times.

What was that sound? … It was the breath we took when we first met.

My heart fluttered foolishly. Met whom?

“Duncan probably left it here last night when cleaning up. You know how careless he can be,” said Joe, logging into his computer. “Or maybe he thought you’d like it.”

“You’re probably right,” I said, though I was only placating. There was no way Duncan Innes had ever read a lick of Harold Pinter in his life, much less saw fit to share a verse with me, and the stationary looked as though it came from the desk of someone who was nothing if not intentional—the notion reinforced by the accompanying salvia blossom.

I was a bit too embarrassed to reveal the existence of the poem to Joe at the moment. More than that, it seemed too personal a gesture to parade it about the office—the private sentiments of one J.F. to me of all people.

I set them aside, as though they meant nothing to me, but my thoughts remained fixed while I settled in for the day.

As I waited for my ancient computer to wake up and grant me access to my in-basket of endless work, my eyes were repeatedly drawn back to the poem, and my lungs insisted on pulling deep breaths of sage-scented air.

Could they really be meant for me? I wondered. If so, who left them?

My eyes misted over, thinking about the conversation we had only two weeks before. Claire…there’s something I need to tell you.

I shook my head to clear it of painful thoughts so I could get through this bloody workday without any more tears. Poor Joe had seen enough of them already. I tried my best to turn my attention toward work and the never-ending tasks awaiting me.

After sorting through his emails, Joe left the office to tend to the books shoved into the return bin overnight. When he was out of sight, I picked up the flower to admire it again. The petals were quite striking for a little plant. So rarely did a blossom have such vital blue color, as though emitting its own light.

I tried to remember what I could of blue sage—or salvia azurea variety grandiflora. I knew “salvia” often meant “healer,” and that sage in the general sense was valued for both its purported medicinal and spiritual properties. The species name “azurea” was Latin for “sky blue.”

I took the poem and flower and headed out into the depths of the library. I didn’t need to consult the computer to find the book I was looking for; I knew exactly where it was, as many times as I had read it before.

The Botany section always carried the scent of blossoms, even though greenery rarely found its way into the library. Perhaps it was merely memory or maybe classical conditioning that stimulated the pleasant aroma deep in my olfactory bulb. Either way, it didn’t matter; it was lovely. I inhaled deeply as I went straight to the bottom shelf in the back corner.

There was the book I was looking for, right between The History of Botanical Art by R. H. Quentin and Mark Raymond’s Botany of the Occult. It was old, and the dust jacket was taped in several places by my own hand. The spine cracked and popped pleasantly when it opened, and the pages carried the musky scent of an old book that always reminded me—for whatever reason—of warm chocolate chip cookies in winter.

I stared down at a hand-drawn picture on the title page, a mass of swaying wildflowers in a sunlit meadow, and couldn’t help my smile. Whispers of Blossoms, by Daniel Rawlings. I knelt on the floor and opened the book, scanning the delicate old pages for salvia.

“There you are,” I muttered quietly. I skimmed over the sections on etymology, planting, and care, knowing well enough about those bits already, past the red and purple salvia descriptions, and stopped at the blue.

The blue flowers of a Salvia, I read, are often aligned with symbolic gestures of the sentiment, “thinking of you.”

“Thinking of you?” I looked around the empty library that wouldn’t be open for another forty-five minutes. “Who the bloody hell would be thinking of me?”

I took the book back to my desk, a dozen questions rolling around in my mind, the least of which being how this person got into the library after hours and found a way to leave it on my desk, who the hell they were, and why they would even bloody want to.

It was the breath we took when we first met.

The truth was that the last two weeks of my life had been a devastating and emotional whirlwind. I had spent most of my time futilely attempting to keep a breakdown at bay. In the process of all that, could I have unknowingly met a stranger who held some sort of enchantment for me? Did I miss an encounter that would inspire a sentiment like this?

The squeaky wheels of the book cart drew near, and I shoved the book, flower, and poem into my desk. Joe popped his head in and asked, “Do you want to take back Mystery and Literature? Or Biography and Self-Help?”

I smiled for the first time in weeks. “The former. I love a good mystery.”

I pressed the blue salvia between the pages of the heaviest book in the library, Carl Jung’s Red Book. Knowing it would take weeks to finish the process, I had checked out the book myself so preservation would occur uninterrupted. I tucked it safely away under my desk where no one would look for it. The sweet old janitor, Duncan, was a kind soul, but not very efficient with his work. Joe and I often found ourselves following after him in the mornings to tidy up and disinfect everything he missed the night before. Never would the old man even consider cleaning in the dark corners beneath my desk.

I spent my day in curious wonder. Every time the doors of the library opened, my heart leapt, speculating if the one who entered was the person responsible for my sudden lightness of spirit.

Unfortunately, it was a busy day, and with Geordie on stress leave and Marsali on maternity leave, we were quite understaffed. So, as eager as my heart was to spend the day solving the mystery of poetry and flowers, the patrons of the library had other ideas as to how I should spend my time.

Still, in between checking out books, assisting a gentleman with a severe case of halitosis to navigate his computer, and cleaning up a puddle of urine in the children’s section, I kept my eyes peeled for a glimpse of a stranger looking fondly at me from across the room, or for the scent of sage in the air, as though the giver might carry it around on their person all the time in the spirit of thinking of me. I even moseyed into the poetry section on the off chance my secret admirer was finding new ways to express their affection, but the only herbaceous scent I noticed there was of the cannabis sativa variety.

It was probably for the best that I didn’t run into anyone of significance that day. I caught a glimpse of my appearance in the late afternoon while washing my hands in the loo, and the feral creature staring back at me in the mirror would have frightened off any potential suitor. My hair was misbehaving more than usual, frizzing about in a particularly cumulus fashion, and it was likely to only get worse throughout the day.

I took a moment to tidy myself a bit, a futile effort, one made more for the sake of telling myself, “At least you tried,” rather than for any promise of lasting effect.

“Well,” I said to my reflection, “looking haggard is better than distraught.”

I realized I had hardly thought of Frank all day. It was shocking what a little distraction could do to clear the mind. Even if the poem and flower weren’t meant for me, at least they brought me a little light in the darkness.

What was that sound that came in on the dark? What is this maze of light it leaves us in? … It was the breath we took when we first met.

Walking out of the loo and into the library, I looked around at all the faces lingering about. Those sitting on the chairs, thumbing through magazines. Those with their noses shoved in books, lost to the world around them. Those meandering through the aisles, trying to find a story that suited them.