Rating:
Archive Warning:
Category:
Fandom:
Relationships:
Characters:
Additional Tags:
Language:
English
Series:
Part 1 of the I can not be saved (from falling into this rabbit hole of time) series
Stats:

Takemichi's mind breaks, Bonten is left to cut their fingers on the broken pieces in an attempt to put it back together. But in reality, they aren't really trying. Because if Takemichi is all glued back together, he will leave them.

I've seen a few fics like this and wanted to give it ago.

His wake is slow, like usual. The first thing he sees when he opens his eyes is never his true surroundings, rather a swarm of mismatched colours splattered in the blood of those he couldn't save. No. He didn't need to save them. That wasn't his job. Calloused hands contrast their gentle caress against his cheek, waiting for him to return to his cursed reality. His pillow beneath him, yet still soft, is more firm than usual, with bumps. As reality fulfils his sight, he realises he is laying on Mochi's bare chest. Ah. He looks up at Mochi, confused. Didn't he fall asleep with Rindou last night? Mochi's chest vibrates beneath him as he speaks,

"No. That was two nights ago." He realised he had said it out loud.

Takemichi hums and lets his head fall back onto the soft cushioning of Mochi's chest. A part of him is telling him to ask what day it is, but a much bigger part shuts it down. Who needs the date? So you can count back how long it's been since your last failure? Takemichi finds himself looking up at Mochi once more, a confused pout takes over his face. Mochi raises an eyebrow.

"You had black hair," it wasn't a question. Takemichi was just stating what he thought was right. Didn't Mochi have black hair? It was shaved on the sides and was in a braid. A similar style to...someone? No, no one he knew. Ryuguji Ken. NO.

"I used to yes. A few years ago," Mochi replied, suppressing a sigh. Such conversations were now the norm with Takemichi.

Takemichi's hand reached out and grazed his chin, his eyebrows furrowed, "A beard? When did that happen?"

"A while ago. You're the one who said I should keep growing it."

A flash of recognition appeared in Takemichi's eyes, "Ah...yes I remember. Thanks Mochi-kun," he smiles weakly before his eyes flutter closed.

Mochi sighed and patted his head, he heard someone clear their throat, Koko was at the door. He 'tsk'ed before walking over and sitting down on the bed next to Takemichi's body.

"I think Sanzu needs to lower his dosage. He can barely stay awake for more than a few minutes," Koko muttered.

"I know, but if he's not in a deep sleep, he will have nightmares."

"Hmm, I just kinda miss him. I mean, he's always here, but you know, not really here. I can't remember the last time I've had an actual conversation with him."

"I think he needs some time out of the penthouse, as much as Mikey won't like it. It's been too long since his last good day," Mochi said.

Takemichi's eyes are dull, clouded over, they were like that a lot lately. His cheeks were sticky from crying on moments before, the Bonten Executives have decided that the only time they ever see Takemichi's eyes ever expressing their true emotion was when he was crying. Ran peered down at him, gently grabbing his chin to make him look up. An innocent smile overtakes Takemichi's face, as if just minutes ago he wasn't screaming and sobbing, pulling at his hair and throwing anything near him.

"Ran-kun, your hair is so cool. And Rin-kun too! With all the purples and blues, it's like a galaxy," Takemichi beamed.

"Koko hooked us up with a good hairdresser. Do you want to dye your hair?" Ran asked, gently running his slender fingers through Takemichi's black curls.

"Hmm, I don't know. I've never dyed my hair before, what if it doesn't look good?" Ran swallows back the urge to correct him, to tell him that he had his hair dyed bleach blonde for a few years when he was younger.

"You know, I think you should stick with your black hair. It suits you."

Ran smiled and leaned down, giving him a peck on the forehead, "I know so."

"Ah! Omi-kun, let me get the first aid kit," Takemichi said, hurrying off to the bathroom when Takeomi walked through the door, covered in blood. He didn't get the chance to say it wasn't his own before Takemichi was out of earshot.

Takemichi returned shortly after with the first aid kit and a wet rag, he smiled warmly at Takeomi before gesturing for him to sit down.

"I'm really fine Michi, it's not-" A finger pressed to his lips, Takemichi pouted, it was difficult to deny such a face.

"Just let me take care of you Omi-kun, okay? You've made such a mess," he cooed, wiping the wet cloth across Takeomi's cheek, cleaning off the blood.

He felt strange, he felt as if he should be in Takeomi's spot, getting cleaned up. That's silly. He doesn't go out on missions so he never has a reason to be patched up. What a strange feeling. A flash ran through his mind, plump pink lips with a small mole on the right side of the mouth. That was it. And it was gone as quick as it appeared. Takeomi noticed the falter in his expression, he knew what it meant. Takemichi's subconscious was trying to remind him of something or someone of the past. Mikey's orders, he had to shut that down.

"What are you thinking about Michi?" Takeomi asked, deceivingly innocent.

"I don't really know. I just saw a pair of lips with a mole beside the mouth. It was weird, I don't know anyone who has a mole on their face," Takemichi replied in a confused tone.

Takeomi cupped the side of his face, his calloused thumb gently grazing his cheek, "That's right Michi, you don't know anyone who has a mole beside their mouth. You never have."

Tachibana Hinata, Takemichi's girlfriend that he never got the chance to break up with was the last person anyone in Bonten wanted Takemichi to remember.

"Hm?" Kakucho hummed, he put some more soap on the sponge before continuing to wash Takemichi's thighs.

"Are you my only friend from childhood?"

Kakucho stilled. After Takemichi came into Bonten's hands, intensive research was done on his life so they knew every single person they had to avoid so their Takemichi was stay theirs. Yamamoto Takuya was a friend Takemichi made shortly after Kakucho ended up in the orphanage and they were still friends up until Takemichi became theirs. Kakucho would never admit it to the other executives, but he had been so jealous of Takuya, for getting to spend all those years by Takemichi's side. That should have been him.

"Yes, of course," he lied without guilt.

Takemichi nodded slowly, his lips puckered out in a confused expression, "My mind is being so stupid. I keep seeing my child self with someone that isn't you. It's this other boy with golden hair and pale brown eyes. I think he kept saying his name was Tak-" Kakucho's covered Takemichi's mouth with his own. He couldn't stand to hear that name from Takemichi's own lips.

"He's no one Michi. Something your mind made up, you don't know him."

Takemichi stared at him wide eyed and shortly a muffled 'okay' was said beneath Kakucho's hand.

Kakucho wrapped the fluffy towel around Takemichi's body, it was a large one that drowned his small body in soft cotton. Kakucho wrapped another around his waist, his Bonten tattoo on display.

"You just go in the bedroom and wait for me okay? I just need to make a phone call and then I'll come dress you," Kakucho said, looking down at Takemichi.

"I can dress myself Kaku-chan hehe, just don't be too long, I want to cuddle."

Kakucho waited until Takemichi was out of the bathroom before grabbing his phone off the counter by the sink and dialled a number he sometimes wished wasn't in his favourites.

"Sanzu, I want you to organise a hit on someone for me."

"Kakucho? Damn, I always knew you were secretly evil too. Give me the name, I'll do it for you myself."

"Yamamoto Takuya, he lives here in Tokyo, should be easy for you."

Kakucho smiled to himself, "Definitely, make him beg to just kill him already."

Hitto Kakucho wasn't a bad man. But Takemichi was his.

He ended the call and walked into his bedroom, Takemichi was already on his bed, kneeling. The only clothes he wore was one of Kakucho's button up shirts, it was way too big on him, going half way down his thighs, the top two buttons undone, exposing his milky collarbone that was adorned with his own Bonten tattoo. Kakucho smirked, he couldn't wait to mark his pale body.

"Manjirou?" Takemichi's sweet voice pulled him out of his fantasy.

"Mitchy would you partner with me in a double suicide?"

Takemichi's dull eyes widen a fraction, but not in surprise or distress. Partner? Double suicide? Someone had said those things to him before and it sure as hell wasn't Mikey.

"Mitchy, don't you want to die with me?" Mikey asked, his lips moving up Takemichi's neck, leaving a poka dot like pattern on his body.

"I would do anything for you Manjirou. But for some reason, when you said that, i thought of someone calling me partner all the time."

"Don't you ever say that again, you hear me? No one ever called you that, you're delusional Mitchy," Mikey seethed. His grip softened and he pulled Takemichi close until his was cradling him, "I love you so much Mitchy. This is why I don't let you leave the penthouse, saying all these silly things. Do you want people to think you're crazy?"

"Shhh, it's okay Mitchy. Remember, there is no one else in your life besides me, Haru, Kakucho, Mochi, Takeomi, Ran, Rindou and Koko, alright? No one else. Say it with me.."

Sano Manjirou was a bad man. But that's okay, because as long as Takemichi stayed broken by his side, then all those ex Toman bastards could stay living in his world.

And for those that didn't know, here is the panel 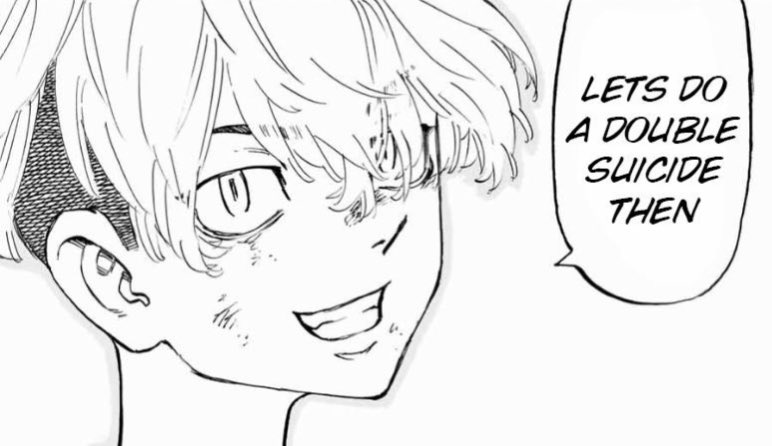