Rating:
Archive Warning:
Categories:
Fandom:
Relationships:
Characters:
Additional Tags:
Language:
English
Series:
Part 1 of the are we in the clear yet? series Next Work →
Stats:

when the sun came up, you were looking at me

“You want me to come to Marbella with you because we’re friends?”

Okay. So the grumpy twat, former football legend, every-fucking-where Roy Kent not only did not want to kill Jamie for any number of somewhat deserved reasons, but wanted him to go on holiday with him, because he liked Jamie. As a friend, not just as a footballer.

Disclaimer: Apologies for any Americanisms. I've tried to keep them out as much as possible, and I don't live in America anymore so I have some distance, but I'm sure some crept in.

Title is from the always fab Taylor Swift.

Six days after the Championship Final

Jamie shifted his weight slightly between his legs, fidgeting while he waited at Keeley and Roy’s front door. He double-checked his texts again, but the messages were still there: 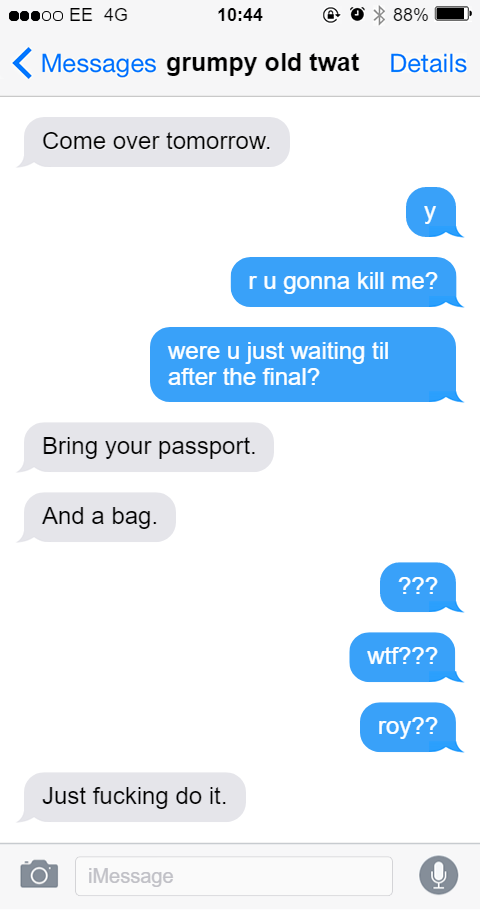 So, definitely not some weird hallucination.

He had no clue what Roy could possibly want with him—let alone what would require a passport, but he had set his alarm anyway and was standing outside waiting for—

Jamie followed him in, looking around for any signs of Keeley and/or murder weapons. He hadn’t spoken to his coach since the night they had been promoted—or, more accurately, since the following morning when the celebrations finally died down.

That night had been fun—almost everyone had joined, even though Nate was MIA, Ted had left around eleven, and Keeley and Rebecca disappeared sometime at midnight for ‘girl chat.’ Jamie had expected Roy to stay aloof and leave when Keeley did, but instead he had sat directly next to Jamie at the VIP area when they first got to the club and spent the entire time with him and the rest of the team like he never had when they were playing together, matching them shot-for-shot. Jamie would have been able to get laid, but he didn’t want to get up from the booth—he had been very aware of the warm line of Roy’s bad leg pressed against him, and he didn’t want to make the other man move. The other lads had almost all pulled, including Beard, so it was just Colin, Sam, Roy, and Jamie sat together toward the end of the night, comforting Sam about his ‘mystery’ lady. If it was Rebecca, Colin owed him 50 quid.

Jamie didn’t remember getting home that morning, but he had awoken to a glass of water and paracetamol sitting on his bedside table. He had assumed he had gotten it himself, a kind of drunken autopilot that he often ran after a particularly long night of celebrations. But now, following Roy into the kitchen, he wasn’t so sure that’s what it had been.

“Sit.” Roy said, pointing at the table. Jamie thought about arguing, but figured he should make sure he wasn’t going to get belatedly murdered for confessing his love to Roy’s girlfriend before he started mouthing off.

“What’s this about, yeah? Keeley here?” He settled for instead. Wait. Maybe he shouldn’t mention Keeley. Roy raised his eyebrows at him, clearly noticing the internal dilemma.

“Stop waiting for me to hit you. I’m not going to hit you.” Roy ordered. Something in his voice made Jamie look up and meet his eyes. He thought of that horrible night against Man City, and Roy’s arms around him. He was pretty sure Roy was thinking of the same thing. They were silent for a long moment before Roy broke eye contact, turning away. “I forgave you for that.”

“Forgave me?” Jamie’s own—much better—eyebrows shot up. “Is that what yelling fuck at me means?”

“Obviously.” Roy stomped to the kitchen counter, leaving Jamie gaping after him. How the fuck was he supposed to know that?

“How the fuck am I supposed to know that?” Jamie repeated out loud. Roy stormed back over and slammed a coffee in front of him. Jamie took a sip, and almost spat it back out in surprise. “How the fuck do you know my coffee order?”

“Don’t get too excited, Keeley had a bunch of that vanilla syrup left from when you were dating and we don’t drink it.” Roy slid into the seat in front of him, sipping his own coffee. “Sorry.”

“Sorry?” Jamie didn’t know what he expected, but it wasn’t…whatever this was.

“Yeah, sorry for just yelling at you,” Roy said in his usual monotone. “I forgive you for telling Keeley you’re in love with her. We’re fine.”

“Do you want to go to Marbella with me?”

Okay, Jamie didn’t pay enough attention to the possibility of this being an extremely strange dream or hallucination. Had he had one of Beard’s crazy girlfriend’s weird teas? That had to be the most logical conclusion. Because if he was conscious, then Roy Kent—who had a well-documented dislike of Jamie until very recently—had just asked him to go to…Spain?

“Like the place?” Maybe there was a club or something that had just opened, and Jamie was completely misinterpreting this. Maybe Keeley was standing behind him or something—he whirled around, but no Keeley. He looked back at Roy in confusion.

“Yeah. Do you want to go to Marbella with me today?”

“Did I fucking stutter?” Jamie looked around the room wildly, wondering if there was some kind of camera crew set up, or some of the team hiding and filming.

“Hang on…just, let me make sure I have this straight. You want me, Jamie Tartt, to go to Marbella with you, Roy Kent, today?”

“Yes.” Roy’s face was poker straight, not a flicker of expression implying that this was at all an unusual request.

“Er…for how long?” Jamie asked, more for time to try to process than anything.

“Six weeks. Or however long you want to stay.”

“Tartt, do you want to fucking go or not? I got the tickets for Keeley and I but she’s too fucking busy girl-bossing and owning her own PR firm and I’ve got a non-refundable villa in Spain for six fucking weeks and I don’t want to spend the entire fucking time on my own when I could be with a friend—”

“You want me to come to Marbella with you because we’re friends?” Jamie finally got out, feeling a bit like a broken record. Roy gave a sharp nod, still not quite meeting Jamie’s eyes.

Okay. So the grumpy twat, former football legend, every-fucking-where Roy Kent not only did not want to kill Jamie for any number of somewhat deserved reasons, but wanted him to go on holiday with him, because he liked Jamie. As a friend, not just as a footballer. Unless…

“There isn’t some football league in Marbella you want me to play in or something?” Jamie asked. Maybe this would make it all make sense. Evidently not, though, because Roy growled in frustration.

“I want you to come because I do not want to spend six fucking weeks alone in Marbella drinking and reading books on my own when I could spend it drinking and reading books and getting annoyed with a mate, and it would seem, the person who I’m closest to other than Keeley or Phoebe or fucking Ted Lasso is…you.” Jamie didn’t outright gape at him this time but it was a close call.

“Right. Okay.” He decided, still not entirely sure what was going on. “What time do we leave? Because I need a lot more than I packed if we’re going for six weeks.” It was Roy’s turn to look surprised, as though he hadn’t expected Jamie to say yes. “Look, mate, I don’t have training, I haven’t had a break in a while, and all I was going to do is go to clubs here anyway. I’m in.” And his dad wasn’t in Marbella—but had, at least twice in the past week, showed up at his place in Richmond. He wasn’t going to mention that, though.

“Okay, great. Good. We’ve got to be at Heathrow in two hours, so let’s get your shit.” Roy said, finally. “Come on, we can get a cab from your house to the airport.” He grabbed a bag next to the door that Jamie hadn’t noticed. Jamie followed him to his car, sending a quick text to Keeley as he did. 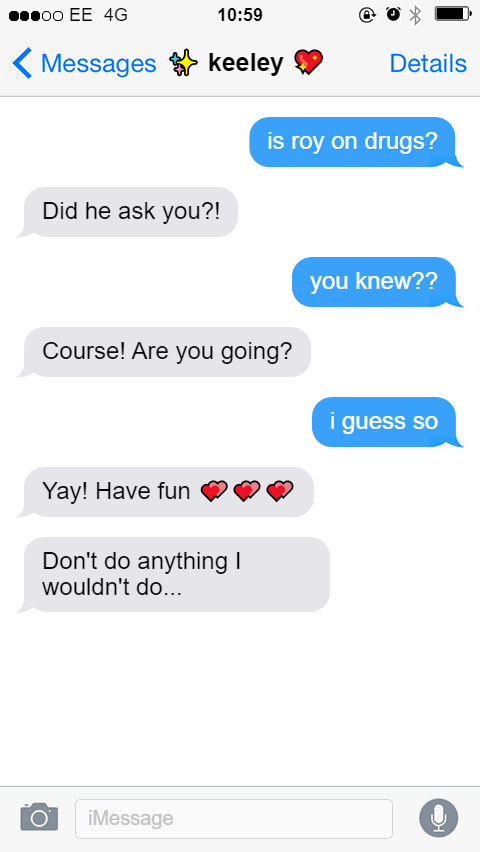 Jamie stared at her response before shaking his head and sliding into the driver’s side. Fucking weirdos.