Sins of the Flesh

Jamie is struck over the head by his attraction for a mysterious Sassenach in the apothecary. She intrigues him, arouses him, terrifies him. Her secrets cannot remain hidden for long, and he quickly becomes tangled in the web that she has woven around herself and her "family." 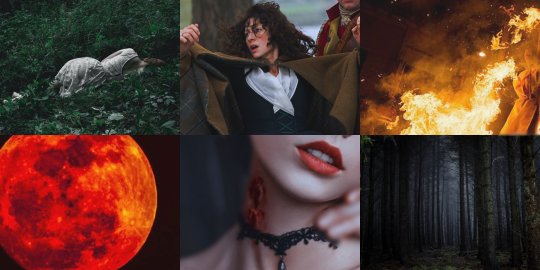 He could see her lying there in a heap from a mile away, face obscured by fallen leaves.

Frank Randall’s wife was known to wander; he was used to her waltzing in the door after dark with a basket filled to the brim with whatever plant had caught her eye that day. She’d easily lose track of time when on these escapades, and it was not uncommon for her to miss supper altogether and eat after he’d fallen asleep.

When he woke up reaching for her and felt nothing but thin air, that’s when he knew something was terribly wrong.

He rushed to her, calling her name again, in vain.

He knew it before he even touched her. His wife had always had a beautiful, fair complexion, but now, she was translucent.

The color of death.

He threw himself to his knees, sliding across the dirt for the last several feet.

He brushed the leaves off of her skin, and he gasped, nearly recoiling. She was cold as ice.

He picked up her head, cradling her in the crook of his elbow. She had a horrible, garish, bleeding wound on her neck. Her beautiful neck…

He shook her, stupidly, knowing the truth in his very bones.

The search party caught up to him, and they all paused several feet away, removing their hats and pressing them to their chests. Frank wept over her pathetically, his heart cleaving in two. How could this have happened…? He never should have let her out alone at night, not once! And now she was gone!

He rocked her back and forth, pressing his ear to her chest, his body not yet caught up with his mind, trying to hear a heartbeat that he knew was long gone.

And then, a choked gasp filled the air.

Frank whipped his head up. Her eyes were open, as was her mouth, wide open in horrified shock.

She seemed unable to breath, if the choking sounds still sputtering out of her were any indication.

“Thank God! It’s a miracle! You were dead, not a single sign of life...God is merciful…”

She looked feral, completely wild in a way he’d never seen. She was spirited, his wife, but she’d never looked completely unhinged this way.

“We just found you here, and you were dead…”

She frantically searched his face with her wide, unblinking eyes.

“It’s alright. None of that matters now. You’re back. We need to get you home. You’re cold as ice.”

She allowed him to sit her up, slowly. Frank’s breath fogged in front of him in the night chill.

And then he noticed that hers did not.

“Are you breathing, Claire? You must breathe. You’ve been without air for too long.”

Her face screwed up as if in concentration, her eyes darting between Frank’s clouding breath and the air in front of her. And then her entire demeanor seemed to change, overcome with terror.

“How is it that you’re not breathing, Claire?” Frank’s voice raised with worry.

He suddenly, violently grasped her by the shoulders and pressed his ear to her chest again.

There was no heartbeat .

Claire’s husband threw her off of him, and she landed back in the dirt with a frightened cry. Frank cried out as well, jumping back as if she’d burned him.

Claire’s head was swimming as she pushed herself back into a sitting position.

“She is undead!” Frank cried, pointing a trembling finger at her. “She breaths not! Her heart beats not! And yet she lives and speaks!”

Two of the men from Frank’s search party stormed forward and seized her by the upper arm, and she cried out in fear.

But when she looked at Frank, he was holding his rosary in front of him, eyes mad with terror.

Claire began sobbing in earnest, her tugs and jerks useless against the men who dragged her along. She was utterly bewildered, panic hammering through every inch of her.

And yet, her heart was not racing. She did not feel her temples pulsing, nor those fleshy parts in her neck.

Could it be possible that she had no heartbeat…?

But she was alive! She knew she was! She felt more alive than she ever had in her life! She certainly didn’t feel like a demon!


“There has to be some mistake!” she cried desperately as they approached the village. “I must have inhaled fumes from poisonous mushrooms!”

Even she knew how ridiculous that sounded.

White hot horror surged through her as her jailers turned to the center of town, to the pyre.

There had always been suspicions about her. She was a queer woman, even she knew that. The color of her eyes had the most superstitious in the village turning their heads. There was a frightening amount of people who’d have had her burned years ago just for that, and her love of plants and herbal medicine. But she’d managed to avoid it with Frank’s influence. He’d kept her safe.

People roused from their homes, women clutching shawls to them, holding their children back.

“ No !” Claire shrieked, jerking madly against them. They were going to burn her alive .

A small crowd of people in their nightclothes gathered around the pyre, clutching rosaries, condemning her with harsh, horrid words.

“I knew it! I always knew it!” One particular woman spat, shaking her head.

“Please, this is a mistake! Please!”

She cried out to a little girl peering behind her mother’s legs, and the child screamed, her mother covering her eyes.

Her voice was no longer heard over the gathering, very vocal crowd.

With a frightening quickness, she was tied to the pyre, unable to fight it.

He was staring at her, still holding his rosary, muttering quietly, likely praying.

“Please, Frank, please...you know me! You’ve protected me from this for years! Because you know my true heart! Don’t let this happen!”

“Deliver us from evil.” Frank crossed himself.

“You have taken my wife’s body as a vessel. There is only hope now to save her soul.”

“Careful, My Lord! Do not allow her to trick you!”

“No,” Frank said tearfully, turning away from her. “I will not.”

And then there was fire.

The crowd cheered, jeering, some crying out to thank God.

The smoke billowed, but Claire did not cough.

The fire crept up and caught on her dress, and she shrieked. Her skin burned, God how it burned. She was in excruciating pain, more horrible than anything she’d ever experienced in her life. She writhed and screamed and begged for mercy, begged for death.

But it would not come.

“Satan is keeping her from catching fire!”

Her dress and undergarments and the rope restraining her had burned to ash, but still she writhed and cried.

“Help me! Please fucking help me!”

And then the crowd was joining in her shrieking. She could not see beyond the flames or through her own blinding pain, but she could swear she heard them cry there were more monsters .

Through her delirium, a pale, horrifyingly beautiful face emerged through the flames, and had she not already been beyond all reason with pain, she’d have screamed. Pale hands reached for her, and before the world went black, she had one thought:

He is not burning either.

And then she fainted dead away into the demon’s arms.