I’m making my way through all the ‘tobers!

I thought a fluffy little piece about our boys at Twyla’s wedding reception was the perfect way to celebrate Sarah’s wedding. May she have a long and happy marriage.

Thanks to goodiecornbread
for the quick beta and for being my rock with technology.

One would not consider Cafe Tropical to be an appropriate reception venue, but for Twyla it made perfect sense. She has spent more time here than in her own home. She knows the patrons of the cafe better than most of her own family, which is for the best. Everyone in Schitt’s Creek has relied on the cafe for a meal at one time or another. She has extended an ear to countless locals or passers by and always has a nugget of wisdom that is actually helpful. She has given so much to this town and now they are extending their joy on her special day. The two men sitting in what they consider “their booth” watch quietly as Twyla and her new husband dance.

“Twyla looks so happy,” David whispers as he dabs the corner of his eye.

“Yea, she does,” Patrick replies as he smiles and pulls David further into his side.

David leaned into him and sighed softly. “I don’t know how a waitress could afford such an expensive dress, but she looks beautiful.”

“I suppose she’s entitled to her secrets,” Patrick mused.

“She wrote it for her dog, you know.”

“What? She did!” David exclaimed. “The cafe has never looked better though.”

“David, that’s because you designed it. You made at least 5 different mood boards.”

“Well, Twyla is a beloved friend and I felt it was my duty to plan it since I am the only one in this town with any taste.”

“Okay, David.” Patrick placed a kiss on the top of his head and gently rubbed his back. After three years of marriage, Patrick found that this was the easiest way to appease him.

“I can’t get over the irony of how they met. She finally raised enough money to fix the cafe’s dishwasher and she ends up falling in love with the dishwasher repair man.” Patrick huffed out a laugh.

David patted Patrick on the chest lightly. “What is it with people falling in love with drifters in this town?” David tucked a smirk into the side of his mouth as his eyes continued to sparkle as he watched Twyla dance.

Patrick shook his head in mock annoyance. “Okay, first of all I was not a drifter. I had a job and a place to live when we met. Second, her husband is from Elmdale. He is hardly a drifter.”

Patrick lifts David’s chin up with his index finger and says, “Hey. Twyla got her happy ending and so did we. That’s all that matters, right?”

David leaned in to kiss his husband soft and sweet. He pulled away from the kiss and looked fondly into his honey brown eyes. “We sure did.”

Twyla and her husband finished dancing and gave a little bow to their guests. The DJ, Hip Hop Ho-Ray, then began playing S Club Party. David looked at Patrick with an excited face.

Patrick chuckled and held out his hand. “Let’s go, babe.”

Here’s a link to a live performance of Heavenly Day I put it down here because I didn’t want to spoil the bit about the dog.

Here is a photo of Dan and Sarah dancing to s 7 Party at her reception. 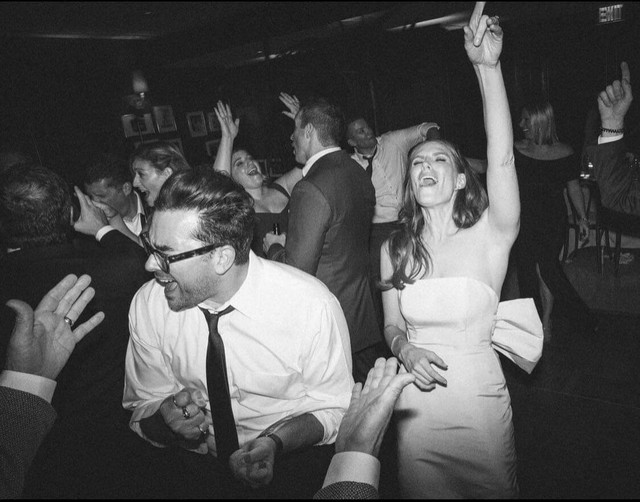 Comments and Kudos make the world go round.