Love is Around the Air

After a big day for David & Patrick, Stevie seems to walk in on something more than just their scheduled movie nights, and leaves feeling a little lonely.

She was supposed to be at Ray’s a half an hour ago to meet David and Patrick for their weekly movie night that had only actually happened three times in the last two months, and now that everyone was miraculously free tonight, she couldn’t bail on them again.

Tonight’s feature was Never Been Kissed which Stevie knows is one of the dumbest movies on the planet but she’ll watch it if that means getting to sit on a couch and drink someone else’s wine for the evening.

Now twenty-three minutes late, she texted David as she pulled up to Ray's driveway. 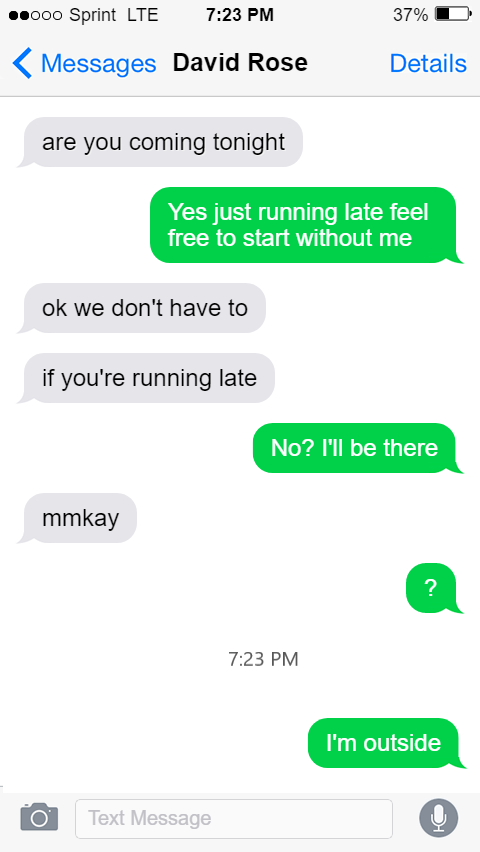 Not even a minute later, David responded. 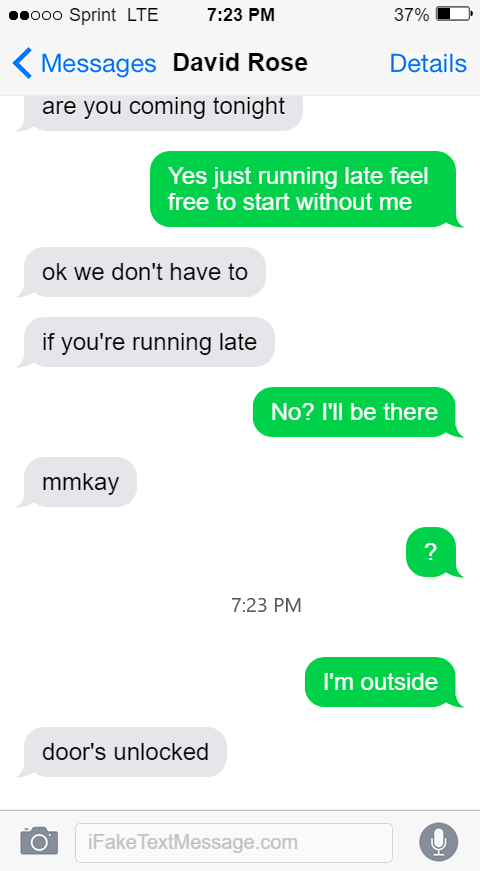 She opened the car door and let the late evening air send a chill up her spine. Fall was her season and she couldn’t wait for it to feel like this all the time. Ray’s front door creaked open, and she made her way upstairs to the living area.

When she hit the last step, she found David cuddled up into Patrick’s side, nestled up in his armpit. Patrick was turned into him, their legs tangled together as they reclined. God, if she wasn’t so Stevie she might have thought it was cute, but as soon as she was in their sight, she let out a scoff.

“Okay, hands where I can see them,” she blurted out.

Generously, they really hadn’t started the movie without her. She settled in as the title screen appeared, armed with a bowl of popcorn and a glass of wine, feeling only a little bit frazzled. Taking a sip of wine, she tried to take a deep breath and get comfortable.

Out of the corner of her eye, she saw movement, though. Pretty sure David just kissed Patrick. Gross. She chose not to address it and took out her phone to scroll mindlessly, not really that invested in whatever Drew Barrymore’s character’s backstory was. She’s never been kissed, we get it.

Just a few minutes passed. Now a whisper and giggle. David was looking up to Patrick, smiling. Looking at him like Patrick was the sun, or whatever those stupid poetry books say. Patrick whispered something into David’s ear causing David to snuggle - that was the only word for it - back into Patrick’s neck.

Stevie wasn’t playing nice anymore. She took out her phone. 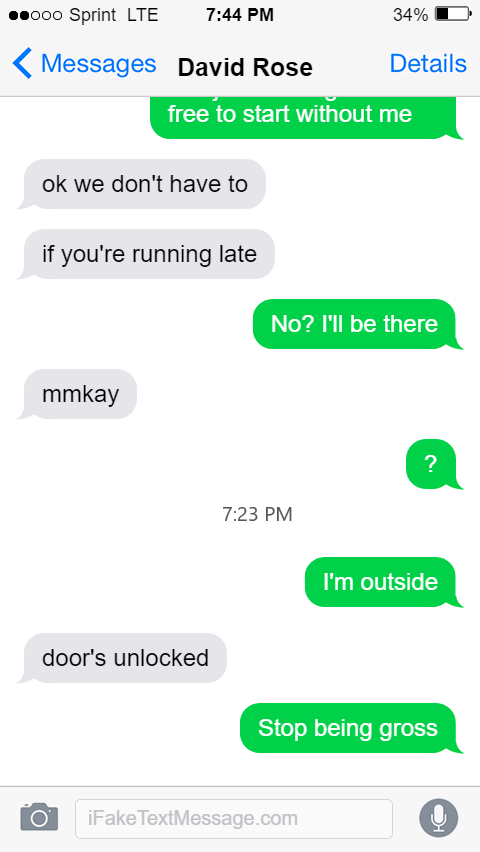 The buzz of David’s own phone pulled his head up from Patrick as he checked the text. He turned to Stevie with a glare and sent a double text. 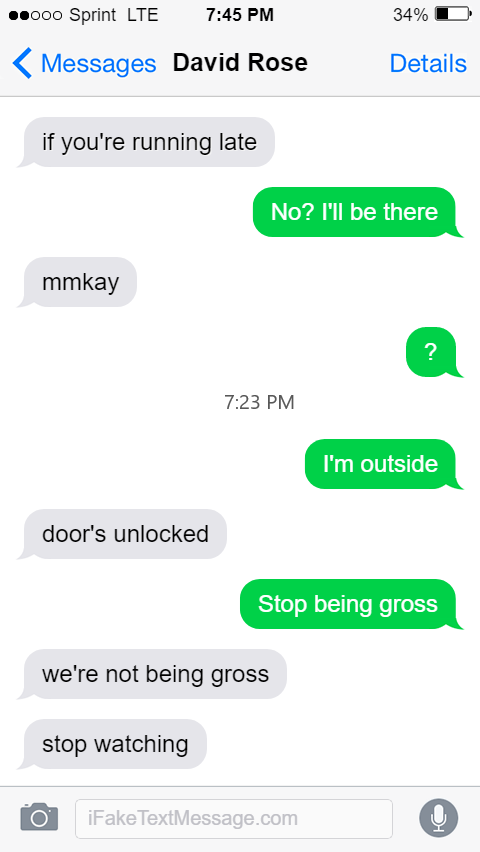 Satisfied with the state of fluster, Stevie went back to the movie and down the rest of her wine, “I’m getting another.”

David hummed in her direction.

Stevie knew that they were doing well and that after the barbeque/Rachel fiasco they seemingly had come out of it stronger than ever, but this was getting ridiculous. As if their fond eyes and soft, casual touches weren’t enough, now they were openly giggling? Kissing?  In front of her? Yuck.

She came back to the couch and found Patrick with his hands in David’s hair, placing playful kisses all over his forehead and hairline.

“I’m back,” she announced, and Patrick immediately stopped, sheepishly grinning at her but pointedly not apologizing.

Back into the corner of the couch, she took a handful of popcorn and worked her way through the salty crunches, still not really listening much to the movie. Just as she took her phone out again, her peripherals pulled her attention once more to David and Patrick, now mid-kiss. Jesus Christ. 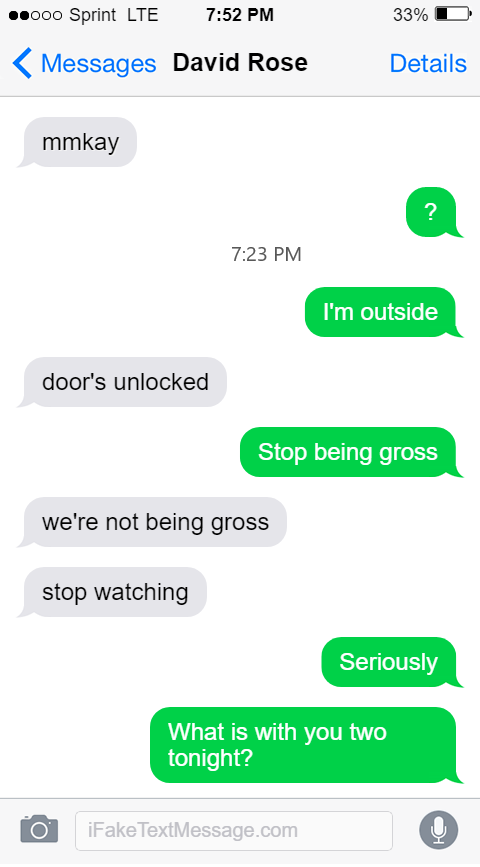 Alarmingly, David now looked over to Stevie with a smile. 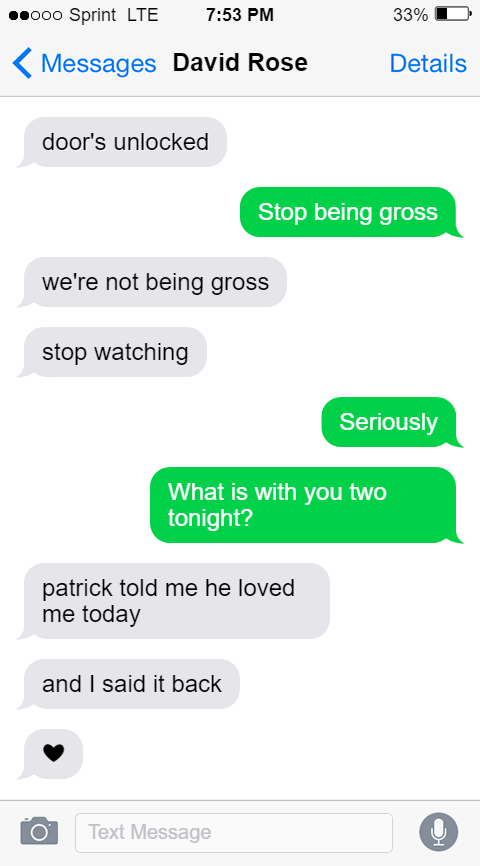 Okay, now it made sense. This was a big day for them. Now she understood why David was being weird over text, and the insanely disgusting PDA. They probably needed the night for themselves, and now she just felt like a weird third wheel - and not in the pokey, troll way like she was used to. She knew when her presence wasn't exactly... needed. 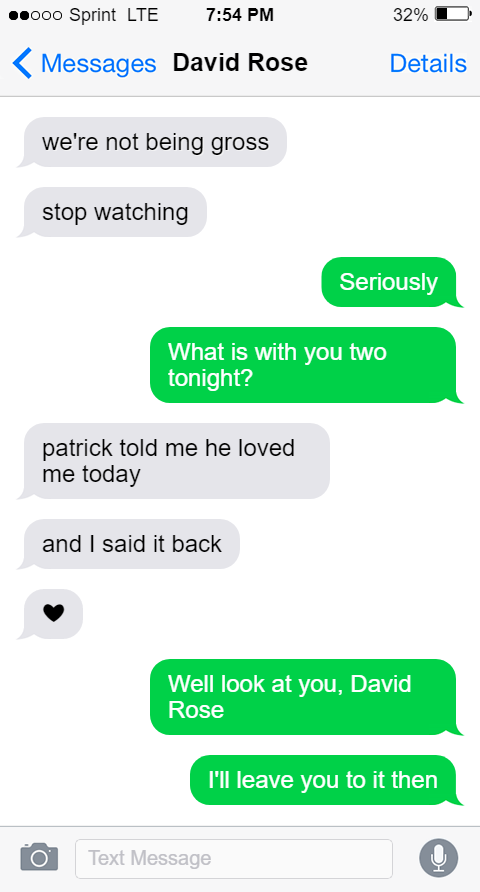 She stretched, making an overly obvious yawning sound, “Gee, ya know I am just... overwhelmed with how tired I am, I just realized. I think I’m gonna head out.”

David lifted his head up while Patrick’s puppy dog eyes turned on in a blink. Patrick spoke, his voice dripping with a weak attempt of belief, “Nooo. Stevie, really?”

“Yeah, I know, I know,” she kept her face neutral.

David broke into a sincere smile and mouthed, “Thanks.”

She poured what was left of her wine into David’s glass, and with a wink, a nod, and a smile she descended the stairs.

Once she was outside she pulled out her phone, letting the cool air hit her flush cheeks from the glass of wine. Feeling a little left out, and a weird mix of emotions between jealous, happy, and a little surprised, she texted the only person who she knew could make her forget about it. 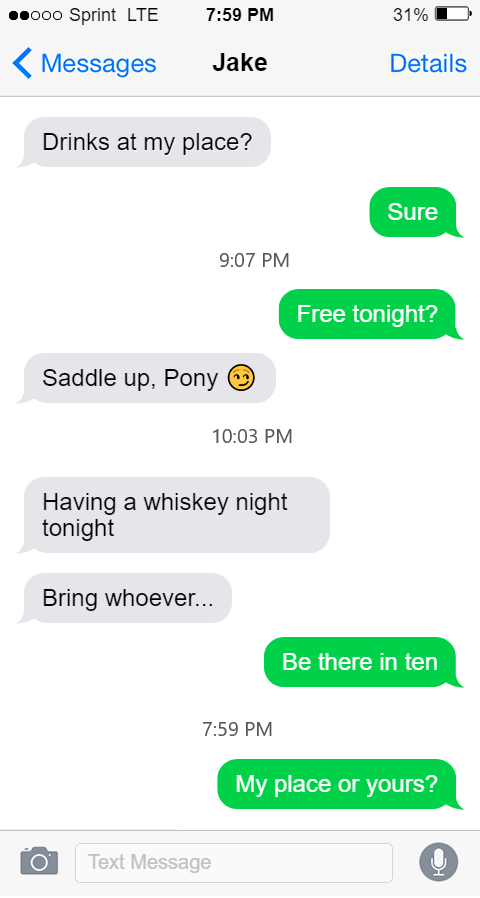 Seriously thank you so much for all the love this lil series has gotten. It is so fun to write!

I am writing this series because I wanted to read this series - so it makes me so happy that some of you are enjoying it, too! Thank you for all the love and kindness. 🥺💖