It’s a rainy Sunday afternoon. Patrick has sent David home while he completes all of the closing tasks at the store, as he usually does on slow days. There’s no need to both stay back and mind the shop when it’s not busy, his husband had said.

Despite it being late October, there’s still a pleasant crispness to the air, so David has the window in their bedroom cracked just a little. The sound of the rain droplets hitting the window pane complement the Divas mix he has playing off Spotify surprisingly well.

Lying in bed, David finds he’s had enough scrolling of Instagram and Twitter, finding nothing interesting enough to hold his attention at the moment. He glances around the room and sees two overflowing hampers near the bathroom. Apparently it’s been a while since either of them have gotten around to doing the laundry lately.

Thank you to my very supportive beta Lisamc21 and my fluffy friends for the motivation!

It’s a rainy Sunday afternoon. Patrick has sent David home while he completes all of the closing tasks at the store, as he usually does on slow days. There’s no need to both stay back and mind the shop when it’s not busy, his husband had said.

Despite it being late October, there’s still a pleasant crispness to the air, so David has the window in their bedroom cracked just a little. The sound of the rain droplets hitting the window pane complement the Divas mix he has playing off Spotify surprisingly well.

Lying in bed, David finds he’s had enough scrolling of Instagram and Twitter, finding nothing interesting enough to hold his attention at the moment. He glances around the room and sees two overflowing hampers near the bathroom. Apparently it’s been a while since either of them have gotten around to doing the laundry lately.

He lazily pushes himself up by the elbows, moving from a reclining position to a sitting one, then eventually kicks his legs off the side of the bed and slowly gets up. His knees crack as he does, yet another reminder he doesn’t need of how his bones and his body are aging. David chuckles softly to himself, because he can now. He’s always been afraid of aging, of getting old, and any reminders of that fact. But he’s not alone anymore. He’s growing old with Patrick, and that makes him brave enough to face it head on and actually (almost) be okay with that.

In fact, the same thought makes him walk right over to those laundry hampers, teeming with both his and Patrick’s clothing, all mixed together. Colours with whites. Plaids with solids. Blacks with blues.

It’s surprising how much motivation he gets to do things he would normally avoid like the plague because of Patrick. He dumps both hampers on the bed and starts sorting. Dark, dark, dark, light. He twists his mouth to the right with a half-grin tucked into his cheek. Story of my life, he thinks, despite that being horribly cheesy. I guess this is what it must be like to live in the stage of the rom-com they never show. The part after the “happily ever after” where the characters actually enjoy their ordinary everyday life and feel satisfied and fulfilled and just happy. How the hell did he manage to end up here? He shakes his head and finishes the task at hand.

Once all the clothing has been sorted and the items to be dropped at the dry cleaners set aside, he brings the first load downstairs to the laundry room. He pours in the detergent liquid, then begins to toss in the light-coloured articles of clothing, a combination of things like socks and underwear and Patrick’s cheap white t-shirts, a few good quality tees of his own, the baseball pants Patrick wore to the finale of his season, some pillowcases and a couple of hand towels from the guest bathroom.

A ratty old light grey tee Patrick often wears to bed falls to the floor as he tries to pile it all in. David kneels down slowly to get it and out of the corner of his eye, he spots something blue. He peeks closer around and behind the washing machine, first noticing that it is quite grimy and gross under there and clearly due for a proper vacuum. The kind where you pull the machine out from the wall and actually get rid of all the dust and dirt trapped in behind. Or so he’s been told.

He’s trying to ignore how long he’s been on his knees as they start to ache and he also tries to push away the innuendo that automatically pops up in his mind when he thinks of that fact. Luckily his arms are quite long, as he’s able to reach and tug on the tiny piece of blue fabric sticking out until he’s unearthed what appears to be a very old, and now very dirty, pair of blue and white plaid flannel pyjama pants.

David holds the offending article out in front of his body, the dingy fabric lightly grasped between his thumb and forefinger. Without thinking about the true state of the pants, he performs his usual ritual of checking the pockets first before throwing them in with the rest of the load. As he does, he pulls out a crumpled yellow sticky note. He holds the note in the palm of his left hand as he chucks the pants inside, happy to no longer be touching them.

The post-it has clearly lost all of its stickiness with age and David unravels it to reveal Patrick’s handwriting, still faintly legible in blue pen. 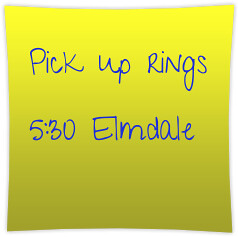 Hmm. Well that’s interesting. This can’t possibly be about those rings, can it? Before David has a chance to try and backtrack possible dates and sort out locations in his mind, he hears the sound of a key turning in the lock on the front door. Patrick is home.

“David?” he asks at a volume just slightly above his regular speaking voice, hoping to reach David in whatever room of the cottage he might be relaxing in. “In here!” David replies. The location of his voice will give him away instantly, since the laundry room is the only one Patrick can’t currently see, on the main floor off to the left, towards the garage.

It only takes a minute for Patrick to find him. Having removed his shoes at the front door, he now appears in front of him wearing a pair of dirty white socks that should probably be added to this load before he closes the lid. Before he can ask Patrick to remove them, he wraps his arms tightly around David’s waist, making him forget all about the socks. “You’re doing the laundry when you could be binge watching something on Netflix? What have you done with my husband?” David recognizes the cheeky grin on his face as he says it. The one Patrick always gets when he’s trying to tease, but is secretly proud of him.

David brings his arms up to Patrick’s shoulders and clasps his hands behind his neck. “Yeah, well I decided my husband would appreciate it if I was at least remotely productive today so I thought I’d get a start on this load.”

Patrick lands a light kiss on the side of his neck. “Well, aren’t you thoughtful?”

He reciprocates with a soft peck on the top of his head. “Uh-huh, yes I am.” David almost gets lost gazing into the warm honey of Patrick’s eyes, when he remembers the pyjama pants and the mystery note. He slides his hands slowly down Patrick’s arms and walks back over to the front of the washing machine as Patrick watches him, a hint of curiosity glimmering in his eyes.

Reaching inside the machine, David plucks the hem of the pants up above the rim where Patrick can see. “Hey, does this look familiar?” As soon as he catches a glimpse, Patrick gets surprisingly excited over a pair of sleep pants. “Oh my god, I thought I lost those in the move! They used to be my favourite!”

They’ve lived in the cottage for over three years now, so David is trying very hard not to think how long those pants have been living in the dirt behind the washing machine. Obviously, they’ve been missed on all of Patrick’s “proper” cleanings, since they were mostly stuck underneath the machine. He gladly lets them fall out of his fingers and back into the wash.

David is doing everything he can to hide the look of utter disgust on his face, but he knows he’s not doing the best job of it. Patrick can read him like a book. But his face journey isn’t complete because he remembers the sticky note, and he can’t help but let a tiny sliver of a smile escape.

He pulls the small yellow paper out of his pocket and opens it again, holding his hand out where Patrick can see it. Silence fills the room as Patrick considers it and then delicately takes the note out of his husband’s hand. “Wow.” With his empty hand, he grasps David’s and squeezes it gingerly. “I can’t believe this was the last time I wore them, I must have misplaced them afterwards. The day I picked up your rings, knowing I was about to ask you to marry me. Damn, I was so nervous...” Patrick trails off and looks down, still holding David’s hand that bears them, running his fingers slowly along his knuckles, grazing each gold ring as he passes. The touch makes David feel tingly all the way from his fingers to his toes.

Still, that doesn’t stop his brain from remembering just how gross the pants are now. “I can’t believe you didn’t wash them before we moved! And then you lost them again under the washing machine here...just think of all the filth and grime on them now! UGH! Maybe we should just throw them in the garbage!!”

Patrick only responds with laughter and reaches across David to switch the dial on the machine from Warm to Hot, like somehow that will magically solve the problem. Maybe it will, Patrick has always been more knowledgeable about this type of stuff than he has. He watches as Patrick shuts the lid and presses the Start button, causing the water to start running inside. “Come on David, let’s order a pizza. You can pick the next Netflix binge watch.” Patrick holds his left hand out towards David and he can’t help but notice how the light from the small window glints off the gold band adorning his fourth finger as the sun goes down. David grabs the hand waiting for him and makes his way towards Patrick. “Fine. And if you’re lucky I’ll even help you fold this later too.”

His husband stops midway down the hall and turns to face him, beaming. “I am lucky, David.”

I greatly appreciate any and all kudos and comments you may feel inspired to leave.

Come visit me on tumblr if you want to say hi!