Contrary to popular belief, Mulder not only knows how to cook, but loves it. And he loves sharing it with Scully, too. Especially when he has fun new utensils.

Inspired by @scullyhexual, @frogsmulder, and a soup ladle, and help with soup details from @silhouetteofacedar. All @s from Tumblr.

Before Samantha had been taken, Teena Mulder had made it a point to involve both of her children in the kitchen, passing recipes and techniques down to them. Bill Mulder had frowned on her teaching their son but had eventually capitulated.

The tradition had ended after Samantha was taken, but by then, Mulder had the skills to cook on his own. And it was a good thing, too; his mother had checked out enough such that she rarely seemed able to help her son with anything, and his father was hardly around. Even when he was home, Bill Mulder was simultaneously wholly opposed to helping with the cooking and yet also unwilling to eat anything other than homemade food.

So, as often as he was able, Mulder would make meals for himself and his mother and stay up late at night, keeping dinner warm on the off-chance that his father came home. Mulder would pass the food off as having been cooked by his mother if asked. That logic and having a hot meal usually mollified his father — though he had a couple of fractures to prove this wasn't always the case. It had sometimes seemed as if the man was looking for reasons to blow up.

As he grew up, Mulder became more aware that this was not the norm. In fact, most people were surprised to learn that he could cook — and keep his apartment clean, and even do his own laundry.

Mulder knew it was probably because of sexist stereotypes — ones that left men without many basic skills but allowed them too often to weaponize their incompetence. Still, it caught him off-guard at first for years.

Eventually, he came to expect it.

So, Scully's reaction — a surprised, "really?" and a dubious agreement — to his invitation to share a homecooked meal at his place while they looked over a case wasn't really a surprise.

Mulder had been pleasantly surprised, though, and not a tiny bit proud when Scully had praised the meal the next day.

He'd since made a point to invite her over for — as his mother used to say — a meal made from the heart, at least once a month, especially after grueling cases.

Over the years, it became one of their many traditions — one that, like the others, both would be loath to admit they loved enough to make them grumpy if they missed.

And they were both currently a little grumpy.

Mulder, however, had a plan. Their trip to Heuvelmans Lake several months ago had inspired a purchase, and the day's cold and rainy weather made this the perfect time to break it out.

"Scully?" Mulder calls over to her, almost vibrating.

Scully looks up, weary expression all but banished when she sees how eager Mulder looks. "What's up, Mulder?" She asks fondly.

"Meet me at my place tonight?" He gives her those eyes. Unnecessary roughness, she thinks. She rarely turns him down, even without him pulling out the big guns. "I have something new I want to try out."

Having seen him get similarly excited because of new recipes in the past, Scully assumes that's what he means. "Sure," she agrees readily. "How's eight?"

"That works," Mulder says, nodding and grinning at her.

He makes a valiant effort to appear to be focusing on his report. Scully notes, however, with no amount of amusement, that it still looks like he might come apart at the seams with the force of his enthusiasm. She would never admit it aloud, but it really is endearing how eager he gets over things he's passionate about.

Smiling to herself, Scully returns to her own report, feeling anticipatory herself.

Scully can smell Mulder's cooking as soon as the elevator doors ding open on his floor.

Her stomach grumbles as she heads toward his door, only slightly mourning not being one of his neighbors.

She'd used to think that his neighbors must resent him; he inadvertently attracted a lot of trouble to the building, after all. But Mulder had confessed to her that he regularly bribed them with his cooking. He disliked cooking for himself, he'd said, because it made leftovers that would just go bad in the fridge while he was out on a case.

Mulder had been cooking on a rare occasion of indulgence, and a neighbor's nose brought them to his door, asking after what was being made. Mulder had promised them the leftovers, and tales of the excellence of the food had reached the rest of the building. After coming into their lives bearing food and charm in addition to trouble for long enough, his neighbors had come around to him.

It had made Scully very glad to see there were more people in Mulder's life who at least wouldn't treat him horribly.

Arriving at his door, Scully knocks. She lets herself in after a call to "come in!"

The aroma is almost overpowering, though it surprises Scully now that she can make it out more clearly. "Potato soup, Mulder?"

It's good, but they've had it before. What new thing did he want to try out if it wasn't a new recipe? She wonders as she hangs her coat on the rack by the door and heads toward the kitchen.

"Good nose," Mulder remarks, greeting her with a smile. Scully returns his smile, still puzzled but unable to resist. "Take a seat, it's almost ready."

He stirs the pot for a moment longer, then turns the stove off and reaches toward the cupboards for a couple of bowls.

"You're gonna love this, Scully," he promises her, bouncing a little.

"New recipe?" Scully guesses, perplexed but amused by his behavior.

Mulder frowns, now puzzled himself. "What?"

"You said you wanted to try something new, but we've had this soup before," she explains.

"Ah." Comprehension dawns on him. "Well, I did tweak the recipe a bit — added some chopped ham and a bit of pepper jack cheese. But that's not what I wanted to try."

He opens the drawer next to him, reaching in and revealing a long blue plastic utensil with a flourish and a grin.

Mulder's smile doesn't falter. "Look closer," he encourages, holding it out to her.

She takes it, observing the head-like top end and the stubby legs on the bottom. "A dinosaur?" She says, still not getting it.

"Better than that," Mulder responds, reaching his hand out for it. She hands it back to him. "Watch this."

He turns, stepping back a bit to give Scully a clear view of the pot on the stove, then sets the ladle inside. Turning back to Scully, he points, eyebrows raised and a broader smile on his face.

"Big Blue," Mulder amends. "I've seen it before in novelty shops, sold as 'Nessie'; I guess the folks out at Heuvelmans Lake borrowed the design for their own local legend. I couldn't resist getting one while we were there. It's adorable!"

"It is pretty cute," she admits, suppressing a smile. She would deny thinking but you're cuter until her dying day.

As if he'd heard her thoughts, Mulder preens, whistling as he turns to ladle the soup out into their bowls.

The soup is, indeed, as good as Scully expected, warming her up pleasantly. She gives her compliments to the chef and receives a shy smile in response, making her feel warm in a different way.

When she leaves that night, she knows the memory of the evening is going to keep her warm like that for a long time.

First coherent thing I've written in a while! I hope you enjoyed!

The ladle that inspired the fic: 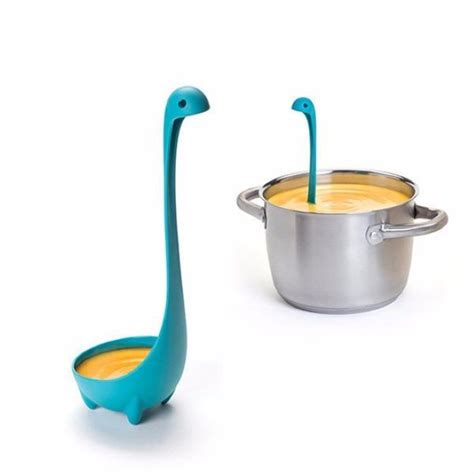