A Splash of Desire

And 1 time he takes a shower with David Rose.

Thank you to the beautiful YouWereAlwaysGonnaBeTheOne for being my beta again and again, and for coming up with this sexy little series 😘 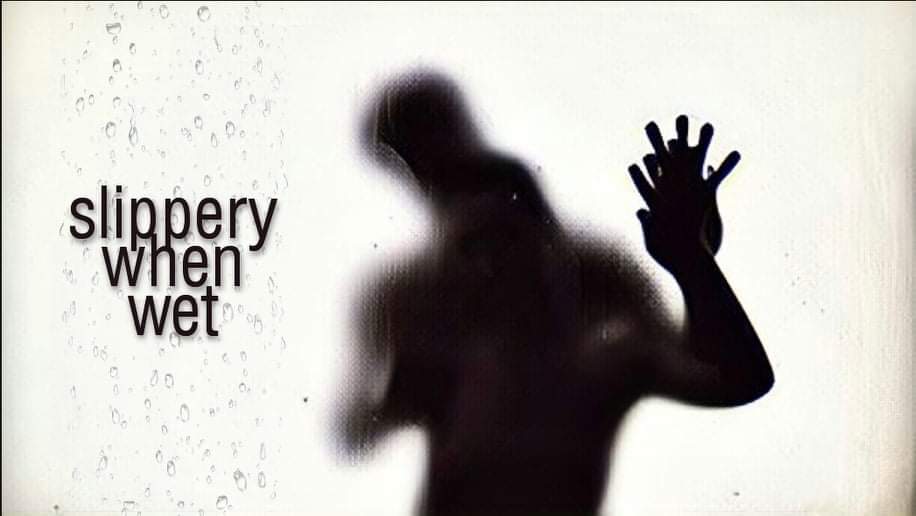 Patrick stood under the spray of the shower. It wasn't common that he would feel this way, this urge. But he was a human, and humans had needs.

Quick and efficient, he finished without any pageantry. With a rinse of his hands, Patrick turned off the water and stepped out.

Patrick rushed to the bathroom, hoping Ray wasn't up yet. Last thing he needed was for his landlord-slash-roommate to catch him running around with a boner like a teenager.

He felt like a teenager. When was the last time he'd woken up, hard and aching, after a sexy dream?

Could it be considered a sexy dream if nothing sexy happened? It was literally just a replay of the afternoon before, when David was stocking candles on a high shelf. He'd been teasing Patrick about his height, but Patrick could only focus on the sliver of skin that kept peeking out from under David's designer sweater. Patrick had been transfixed, which was odd. He'd seen more skin in the locker rooms at school, so what was so special about an inch of David's back?

Either way, this was awkward and embarrassing. Luckily cold water was in abundance here, and after about 25 seconds under the icy spray, Patrick felt a little better.

It seemed like Patrick was always sneaking into the bathroom at Ray’s. Last time, he was sporting an awkward boner that he was anxious to get rid of. This time, though, he was looking for another way to receive himself of this urge.

Last time, he'd been in a panic, not understanding why he was constantly drawn to David, feeling the churning in his gut. Had that only been a few weeks ago?

Something had changed recently. Well, something had changed a long time ago and Patrick hadn’t seemed to realize it. But maybe it was the excitement of the opening, the satisfaction he felt, the pride on David's face. Maybe it was the hug after they closed, the lingering touches… Patrick hadn't been so diluted to deny the draw to David, the urge to touch and tease. He was just very good at convincing himself it was purely platonic. It was the store. It was this town. It was the fresh start.

No. Now he could admit it: it was David.

Once the water warmed up sufficiently, Patrick stepped into the shower. He thought about David, those long legs and strong arms. Now that he'd been the one wrapped in those arms, pressed against David's solid chest, he thought of little else. How would those long legs feel tangled around him? How would that 'sloppy mouth' taste?

Patrick grabbed his throbbing erection and imagined it was David's elegant fingers holding him. He stroked himself, picturing the hair he knew dusted David's chest. He thought of reaching out and touching David, removing those expensive sweaters, pulling off those ridiculous pants. He wondered how it would feel to run his fingers through David's always perfect hair. Looking down and seeing David on his knees, eyes dark and lips wet, waiting to take Patrick in his mouth.

It had only been 14 hours since he'd seen David naked, but he was desperate.

Patrick was turning in early tonight, after having had very little sleep the night before. Not that he was complaining-- a night with David, alone in a bed, was worth every sleepless second.

Patrick had dropped David off at the motel that morning before returning to Ray's. They'd met up at the store and worked together from open to close, neither wanting to leave the other, both constantly making excuses to touch or kiss. Patrick had never felt more attracted to another human before in his life.

Now he was getting ready for bed, bone tired, but his mind wide awake. His bed had never seemed so empty, his evening so unfulfilled. He hoped a shower would help relax him enough to fall asleep.

But in the privacy of the shower, all thoughts returned to David. How he looked as Patrick undressed him. How he shuddered under Patrick's touch. How he moved against Patrick's body. They hadn't done much-- no, they'd done plenty-- but everything was amazing. David was so patient and tender and giving and so fucking sexy. The way he'd looked in his silky black boxer briefs, nervous as if his perfect physique would be anything but. The thick hair across his chest, leading down to below his waistband. His round little ass that fit in Patrick's hands so perfectly. And his cock…

Patrick took himself in hand as he remembered David, long and cut and hot, desperately dripping precum as Patrick worked the courage to touch him. He could literally feel David throb in his hand, heavy and hard, and Patrick now but his lip in memory. He yearned for the taste again on his tongue.

Patrick worked himself hard and fast, not at all like how David had taken care of him again that morning. He felt the coil tighten as he got closer to the edge, imagining his hands on David, his body on David, his mouth on David.

He came, a little lackluster compared to the few times he'd come with David. But imagining David was better than never having had David at all.

Patrick stepped into the shower with one thought in mind. He'd double-checked the door to make sure it was locked, and brought in his newly-purchased silicone lube.

He washed, as usual, working up the nerve. He thought of David, of his filthy mouth and dirty promises during phone sex.

"I'm going to eat you out til you scream," David had whispered, and Patrick had come almost immediately.

Outside of the hasty handjobs in the backroom and the occasional fooling around when they parked the Lincoln some nights, there hadn't been much time to connect since Stevie's. But Patrick wanted to be prepared for his boyfriend.

Boyfriend. It's been weeks but that word still shot tingles through his body.

Getting hard, Patrick opened the lube and poured a generous amount into his hand. He'd jerked in the shower enough times since meeting David that soap would usually suffice, but this time…

This time, he moved a lubed hand behind him, letting a slick finger find his rim. He'd never really done this before, despite David swearing by it.

Patrick had asked David to talk him through it, how'd he finger him gently, work him open.

"I'm gonna tease your hole with my fingers," he'd said. "Just rub little circles around you, let you feel what I want to do to you. What you want me to do."

"Then I'm going to press in one finger, just a little bit. Feel your tight little hole as I enter you for the first time."

Patrick slid in a finger to the first knuckle. It felt strange, but not bad. Pressure. He thought about what David had told him, and moved his finger around to stretch a little bit.

"Can't wait to feel you so tight on my finger, no one else has had this ass but me."

"All yours," Patrick had choked out.

Now, alone in the shower, his breathing was more controlled. He stroked his cock while working himself open around one finger, slowly inserting it as deep as he could. The stretch was more pleasant than he'd expected, and soon he was anxious for more.

"I'm gonna fuck you on one finger til you beg for more," David said in a low voice. "Then I'll tease your little hole with a second finger. Just enough to drive you wild."

Patrick slipped out and brought his hand forward, coating it in more lube. This time, as he inserted one finger, he pressed a second in alongside. The stretch was much deeper this time, he felt it all the way through him. It was an intense sensation, and heightened the orgasm building within him. He didn't waste much time working himself, leaning against the wall as he fucked into his ass. He could hear David's voice in his head.

When Patrick came, he actually cried out a little. He could feel his ass tighten around his fingers while he poured over his fist.

"Holy fuck," he panted. When was Ray going out of town next?

Patrick picked up David on his way home from a hike.

"I'll just shower real quick and we can go get dinner," he promised as they parked.

"He's at a photo shoot," Patrick replied. He was halfway up the stairs, already pulling off his tee shirt. He looked down from the landing and saw David gaping at him. He glanced at his chest, still glistening with sweat, arms a little dirty from the trail. "Care to join me?" Patrick asked.

David didn't reply, but immediately came stomping up the stairs after him. Patrick laughed and hurried along. They fell together at the top of the stairs in a crash of laughter and kisses, moving swiftly to the bathroom.

They parted briefly for Patrick to start the shower and them both to strip, before stumbling together under the spray.

David nuzzled his face in Patrick's neck. "Mmmm you smell like a pinecone," he mumbled.

"Is that good?" Patrick smiled, grabbing his bar of soap.

"Ooh, is that the neroli and birchwood soap we got from Tabitha?" David asked, perking up. Patrick nodded as David took the bar, lathering it up and washing his boyfriend's back.

Patrick let David wash him, take care of him. David didn't consider himself very nurturing or generous, but Patrick knew the truth. He knew that David was much more selfless than he gave himself credit for.

"Turn around," David instructed. He turned, and David washed his chest for a moment before Patrick took the bar from his hands and set it on the shelf. He took David's strong stubbled jaw in his hands and kissed him. He felt David reciprocate, grabbing Patrick's hips and pulling them together. He knew he'd been hard since they got into the shower, but now he could feel David was the same.

Desperate for more, Patrick turned them and pressed David up against the wall, pressing himself as close as he could. David moaned into his mouth and reached between them, grabbing Patrick's dick.

"Oh fuck," Patrick groaned, bracing the wall with one hand and grabbing at David's cock with the other. God, how many showers had he taken in this house, dreaming of David?

"No, no," David said, taking his own dick in hand, pushing away Patrick's. Patrick dropped his arm and watched as David wrapped one elegant hand around both of them, stroking them together.

Patrick's breath shuddered and he braced both hands on the wall, resting his forehead on David's shoulder. He couldn't tear his eyes away from the view, their cocks siding together in David's firm hand. It looked almost as good as it felt.

"God you're so fucking thick," David breathed, letting his free hand roam to Patrick's ass. "Can't wait for you to fuck me again."

"You feel so fucking good," he sighed, bringing both hands down to David's shoulders. He dug his fingers in and squeezed his eyes shut as he crept closer to the edge.

"You're going to kill me," Patrick sighed as he pulled David into a bruising kids, tonguing into his mouth to chase the taste.

David chuckled at his boyfriend's excitement and, without breaking the kiss, held out his hand to rinse off under the spray. He brought back his now-clean hand to squeeze Patrick's ass.

"Let's go get some dinner."