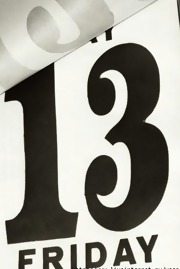 Napoleon, Illya, Mark, and Kit stood side by side in Alexander Waverly’s Conference room.

Their heads were bowed with their hands clasped behind their backs like penitent children...well actually, they were penitent.

“Though I’ve partaken in the superstitions of this day gentlemen: I am now drawing the line, things have gone too far,”The Old Man barked.

In his right hand was a horseshoe, and he shook it at his agents as he spoke.

“Mister Solo, I’m not done speaking, so please keep your paltry excuses to yourself.”

The senior agent bit his lower lip as he cringed.

“Now, I understand how this Friday the 13th mumbo-jumbo has invaded headquarters, given that most field agents are rather superstitious, but really gentlemen this was carrying things too far!”

“Going forward, I will no longer avoid scheduling assignments on this date.  Life must go on in spite of your unfounded fears. UNCLE Northwest will no longer be crippled by irrational notions. Am I clear on this? Now all of you, clean up your mess!”

“Yes sir, “ the agents spoke in unison, nodding their heads.

“By the way, since this is not a punishment, you should consider yourselves lucky that I’m in a good mood today. There will be no repercussions...at this time. However that being said, you do owe a number of people a heartfelt apology. Now dismissed.”

The four men quickly vacated the office but paused for a moment in the corridor.  Luckily Lisa Rogers or anyone else was within ear shot.

Being the senior agent, Napoleon quickly came up with a game plan,”Okay, Illya you take the labs, the armory and motor pool, Mark you have records and communications, Kitt, you have Medical and Security.” Napoleon said.

“And what will you be doing?” Kuryakin asked.

“I’ll go to the secretarial pool, and guest accommodations and the conference rooms.

“No surprise there,” Mark winked. “I vote we all take care of the Masque Club together.”

“Wait,”Illya cut him off.”I think we are going to need containers to stow…”

“You’re right.” Napoleon snapped his finger as he quickly had an idea. “Milk crates in the Commissary.”

“Now how many do we have to collect?” Mark asked.

“Somewhere in the range of thirty...well, maybe a little more.”

“It is more like fifty,”Illya said, looking directly at his partner. “Unlike some people, I kept an accurate count.”

Napoleon for once ignored the dig.

“And I only did a couple,” Kit chimed in.“Blimey, I don’t understand why they became a problem.”

“Excuse me,” George Dennell appeared from around the corner. His head was bandaged and one of the lenses in his eyeglasses was cracked.

“This is why it was a problem,”George pointed. “Getting hit with not one, but two horse shoes is not my idea of being lucky. Why did you have to hang them over all the doors in headquarters?”

“It seemed like a good idea at the time, right Illya?” Napoleon’s voice was a bit snarky as he got his own dig in.

“I did not take into consideration the opening and closing of the pneumatic doors causing the horse shoes to shift and potentially fall.”

“Potentially?” George snapped. “I’ll have you know that over a dozen people were hit on their noggins.”

“Sorry George,” the others mumbled as they slowly backed away.

“Looks like April is the only one who was lucky,” Mark said.

They continued walking, heading down the corridor.

“I do not call being laid up in a hospital bed lucky,” Illya answered back.

“I have a feeling April is going to feel the wrath of Alexander Waverly once she’s released,” Napoleon shrugged. “I’m sure she’ll need some consoling after the fact.”

As soon as he uttered those words, Napoleon dropped to the floor.  There, he was holding his hand to his head as he picked up a wayward horse shoe.

“Where the hell did this come from?” He stood, rubbing the rather sizable lump blossoming on his forehead.

They all looked up to the light panel above their heads; it was the fixture that flashed the red and green warnings when headquarters was experiencing an emergency.

“I apologize Napoleon,” Illya mumbled.”I suppose I was being too efficient.”

“You owe me for this one, tovarisch.”

“I have no doubt of that Napoleon.”