Jamie struggles with the thought that as he fails to carry Claire to bed one evening, it may be the last time it'll ever happen.

The Frasers on the Ridge as senior citizens, grappling with their own mortality, and all Jamie wants to do is hold Claire, okay? Hope you enjoy this short little thing. It was a collaborative effort between @adsofraser and myself. She came up with this wonderful idea, and I offered to write it out. Also, I don't normally attempt any sort of dialect in my stories because I'm terrified of butchering it, so please be kind.

The lovely moodboard is, of course, by @adsofraser. 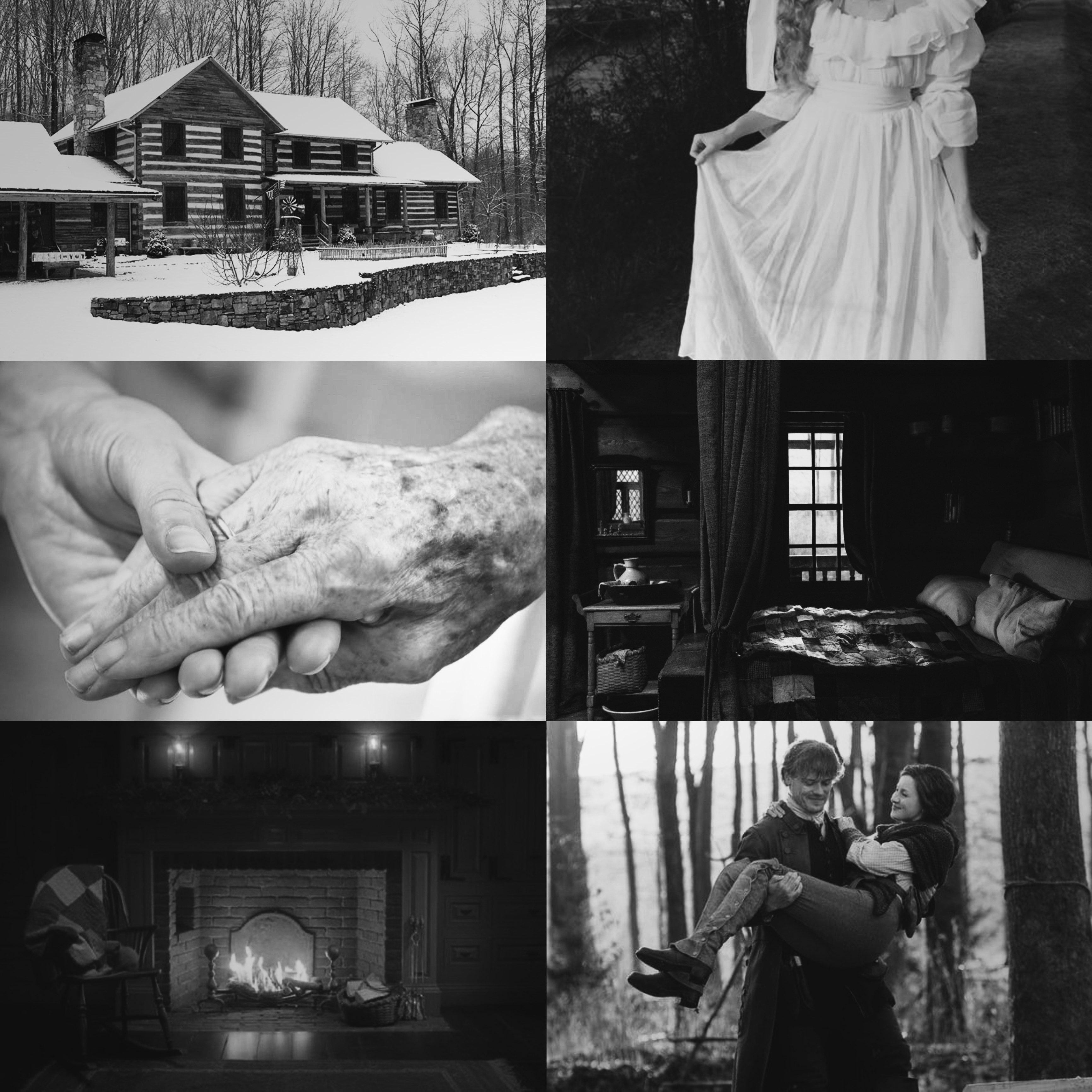 The fire crackled as Jamie leaned forward, reaching out to grasp another log with one large hand and giving it a toss, sparks flying haphazardly around and up the chimney he’d built with his bare hands. It was their second, and thankfully it seemed, last. The second Big House had been a long endeavor, but it stood the test of time.

Things had changed on the Ridge - people constantly coming and going, but Jamie and Claire stayed on, making it their forever home. Jamie glanced out the window, the fireflies mimicking the swirl of sparks, flickering like so many candles suspended in midair.

Leaning back again, he looked over, a half smile playing on his lips as he caught sight of all the light he knew he’d ever really need. She had a number of names: healer, doctor, witch, La Dame Blanche, Sorcha. But he always hoped Sassenach would be the last to escape his lips before he left this world for good.

For now, though, he was content to whisper her Christian name: Claire. She’d fallen asleep again, in her chair, a half finished letter to Marsali and Fergus resting in one hand. The quill she’d been using was long forgotten on the floor. Jamie said her name once more, a little louder. She didn’t stir and Jamie held his breath, watching for hers, that split-second fear that her breath had left her for good. His heart beat wildly as he watched her chest rise and fall, a small smile forming on her lips as she slowly opened one eye, watching him watch her.

Tapping her knee, he stood, placing the letter on the mantle so she’d remember to finish it tomorrow.

“Up you get,” he said, holding his hand out.

She didn’t request this much - Jamie knew she must be truly knackered to ask.

“I’ll carry you anywhere, Sassenach,” he whispered, bending to get one arm under her legs. She threw her arms around his neck, and he lifted her slowly, her silver hair cascading over her shoulder, brushed long and left loose. He found he didn’t miss her dark curls. This white, shimmery color suited her, and he told her so whenever she voiced insecurity over it.

Jamie stood, slowly, taking one step toward the bed before he felt the pain. His back was going to seize up on him. It hadn’t done so in ages, but tonight, when all he wanted to do was grant Claire’s simple request, the sharp muscle aches begged him not to.

“Are you all right?” Claire asked, immediately sensing something was off. Her eyes searched his face.

Jamie winced as he heard her tone shift. Her voice was suddenly the one he heard coming from the surgery - it was now alive and well in their bedroom. He set her gently down, her feet steady and sure as she looked up at him, concerned.

He waved his hand in her direction, hoping she’d not say anything else, but he knew it was futile. He motioned her to the bed as he shuffled carefully over, easing himself back on the mattress with some effort.

“You’re staying in bed tomorrow. And no more lifting,” Claire ordered crawling in next to him.

Jamie eyed his wife, knowing he had little choice in the matter. He’d have to send her out to fetch help, to take care of the tasks that needed doing while he wasted away in bed. Claire moved toward him, but he stopped her, his hand coming to rest on hers as she laid it on his chest.

“No… better just let me be, Sassenach.”

She shook her head, admonishing herself.

“Of course,” she said, kissing her hand and placing it on his cheek, etched with lines she always felt the need to stroke. So, she did, his lips curling into a smile as though he were already asleep. Jamie blinked rapidly, took a deep, settling breath, though he winced at the pain it caused.

“What’s wrong, my love?” Claire asked, Jamie unable to hide anything from her, no matter how hard he tried.

He glanced at her, then squeezed her hand in reassurance, though his own heart was shattering - silently, but painfully.

“I just-” he began, staring up at the ceiling, swallowing hard. “I couldna carry ye to bed.”

“So what? I’m perfectly capable of walking. I’m only sorry you hurt yourself.”

Claire knit her brow, trying to make sense of Jamie’s despair at not having made it to the bed with her. She knew his back would recover, he’d bounce back like he always did. Wouldn’t he? She suddenly felt a pang of grief, gripping her so hard that she thought she might snap in two. They were old - there was no denying that. Jamie’s hair was light, thinning, and though he was still fit for the most part, he was losing weight. He still worked everyday on the ridge, physical work requiring a strong hand, and Claire knew this was a sense of pride for him. He enjoyed the work of keeping their home in top shape, tending to the animals, and the tenants. War was far behind them, thank God, but Jamie would soldier on in one way or another forever, Claire knew.

She, on the other hand, felt like she was shrinking, her thin hands wrinkly and lined catching her by surprise as she worked in her surgery, sewing stitches into a wound or performing some minor surgery or another. It was as though she was wasting away, though she knew this was only an illusion, born of insecurity and the realization that she wouldn’t be around forever. She’d even had to begin delegating some duties to Mandy - her beloved granddaughter, and her wonderful apprentice - because, deep down, she didn't have the stomach for a lot of things anymore. She’d also become terrified of infection, knowing that if she became gravely ill, she’d likely never recover.

Glancing at Jamie now, she saw that he’d started to weep in earnest though he was doing his best to keep it at bay.

He did, his eyes wet with tears.

“I’m afraid that was it, Sassenach.”

Had he read her mind, had he known what she was mulling over in her mind moments ago? Well, it wouldn’t be the first time, nor the last, she mused.

“I’ll not be able to lift you anymore. To carry you, to hold you.”

“When we wed, I promised that I’d give you the protection of my body. I’m no good to you if I cannae give ye that, at least.”

“What? Jamie - your back will recover - it always does.”

“Maybe - maybe not - but what if I’m no longer able to - to hold ye - to have ye in my arms? I cannae even have you rest upon me at the moment.”

Claire huffed, then leaned up, planting a soft kiss on his mouth. She tasted his tears, the salt lingering on her lips as she pulled away, giving him a smile. She pushed her own dire thoughts away as she did her best to comfort the man she loved more than life itself.

“You know, Jamie - our bodies may give out - we may end up bed-ridden or worse - but one thing will never change.”

“I’ll always be with you - you carry my soul inside your heart - as I do yours.” She paused, swallowing the sudden lump in her throat. She watched Jamie’s face soften a bit, so she continued. “What’s that you said, way back in France?”

“Yes - you said something about wanting to put me in your pocket, carry me around.” Claire laughed at the memory.

“I’ve been in your pocket all this time, don’t you know? I never leave you.”

“You hold me all the time, Jamie.”

“Oh, shush - tomorrow, you’ll feel better - and I’ll feel better…” she sniffed, wiping her nose on her sleeve. “I’ll be right here, and you can hold me all day if you like.”

Jamie smiled as Claire wiped his cheeks, gave him another kiss, then laid back on her pillow. She felt Jamie’s hand find hers again, underneath the quilts, and her own anxiety was eased for the moment.

It was a ritual now, and both of them relied on it every night, a reassurance that the other was there, that if one never woke up again, that the last words either of them heard would be their vow to one another.

“I love you,” Jamie said, squeezing her hand.

Their words - simple but weighted with meaning, lulled them both to sleep, safe and content in one another’s hearts.