Co-written with BlueNine over on Spacebattles. 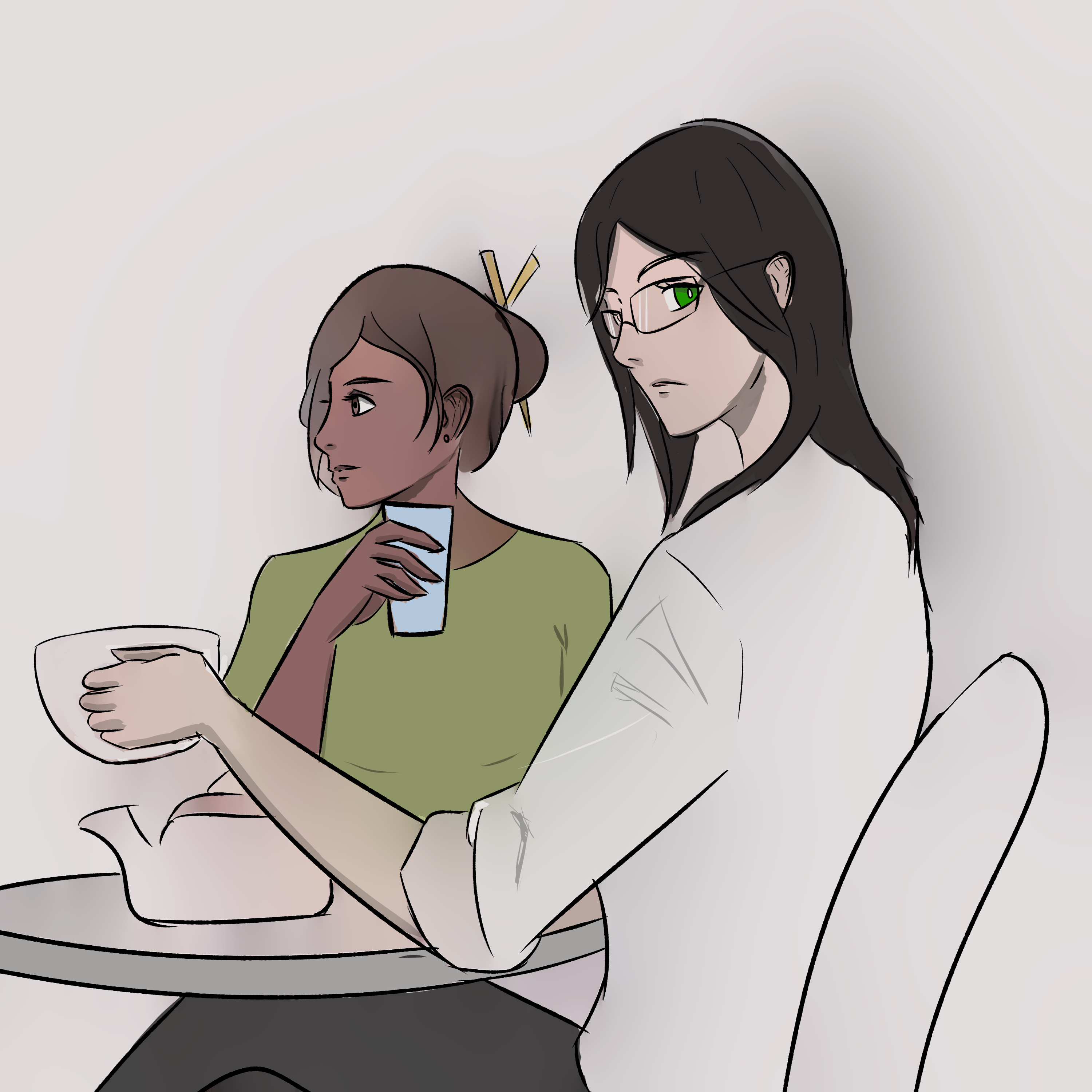 Down Hero Road, in a small alleyway near the train station that was almost hidden behind the bustling streets of people on their way to Japan’s most successful Hero Academy, a tall woman was holding up a sign near a wall.

Her hair was done up in a bun and her sleeves were rolled up, revealing bright scars which stood out against her dark skin.

She stuck out her tongue, spoiling an otherwise impressively stoic look of concentration. A bead of sweat rolled down her eyebrow, causing her to squint.

“If you don’t tell me where you want it in five seconds,” the woman said, glaring down at the other woman below, “I’m ramming it into the wall sideways.”

“Just a little bit higher,” her companion suggested. The exasperated woman obliged, the sign reaching a spot halfway between the doorframe and the second floor. Her companion hummed. “Almost there… keep going… higher...”

The woman whipped her head around to see her companion grinning smugly. “ Taylor ,” she hissed. Taylor gave her a shameless thumbs-up. The woman sighed. “I really hate you sometimes.”

The woman grumbled and made a subtle gesture, turning the sign into an indistinct blur of shadow. She eased it into the wall and it rematerialized, now stuck so tightly that anyone else would need to punch a hole into the wall to get it off.

“Beautiful,” Taylor said. She winked and made a “finger guns” gesture. “The sign isn’t bad, either.”

Sophia rolled her eyes, looking back to the sign to brush some dust off it.

Taylor offered Sophia her hand as she stepped down, interlacing their fingers together as they stood back to admire their work.

It had been roughly a week since they had opened and business was still slow.

Slow was fine, Taylor had to remind herself. They didn’t open the cafe to get rich. Money was hardly a concern between the two of them.

She tapped her index finger on the phone that was propped up on the table, flicking through the news of the area. A few arrests here and there, but nothing serious. That was good.

Taylor frowned. The neighborhood was exceptionally safe, as was reflected in the blistering rent they paid. UA, the premier hero school in the country, was located nearby. Villains gave the whole area a wide berth, fearing the presence of not just pro heroes, but pro hero aspirants who had earned themselves a provisional license and were eager to prove themselves.

This world contrasted so starkly with Bet that Taylor often felt like she was wandering through a surreal daydream. Heroes had the upper hand here, for one thing. To an almost absurd degree. The concept of a secret identity for a hero was confusing to these people. Why would a hero need to hide who they were? Some “underground” heroes concealed their identities, but they were few and far between.

On the other hand, only the absolute strongest villains were able to operate in the open, and even then the heroes contested them at every turn. There was no Slaughterhouse here, no Endbringers or Nilbog or Blasphemies. No desperate truce with villains in a bid to stall the end of civilization.

The most dangerous man she could find in the history books was a civil rights advocate who objected to quirk regulation.

The world has moved on without me.

Her eyes moved, glanced over to the humming figure in the kitchen, and warm affection banished the restless doubts that had settled over her.

Sophia certainly didn’t seem to harbor any misgivings over this new world. Contentment and joy radiated off of her, even while she did something as simple as making a cup of coffee. She was happy taking things slow, and Taylor was happy to let her do that.

Taylor rubbed absently at the stump of her missing arm before she looked back to her phone. A few messages, a note from her father to call him when she had time. A notification from the bank, confirming a loan payment. The HeroWatch App lit up, posting an article about rumors that All Might, the greatest of all heroes, had been seen near U.A. in civilian clothes.

She frowned, but couldn’t gather her thoughts before Sophia came to the table, putting down Taylor’s oversized mug of coffee before sitting with her own iced tea.

Taylor shrugged, lifting the cup up to her lips. “Nope. Another quiet day.”

Sophia hummed, ice cubes jangling as she took a sip from her glass. “Nice, isn’t it? Nothing’s on fire, nobody’s starting shootouts Downtown.” She set down her glass and chuckled. “You know, I don’t think I can remember the last time I saw an honest-to-god thug . It’s great.”

“How about that guy who robbed the convenience store?” Taylor asked, putting the mug back down on the table.

Sophia snorted. “Oh, come on. He didn’t even have a real weapon.”

“I could do some damage with one of those little folding knives,” Taylor grumbled.

Taylor struggled in vain to prevent a goofy smile from spreading across her face.

Jesus. When did I become so damn soppy?

Taylor squeezed Sophia’s hand, eliciting a grin. “So, did anything exciting happen while I was gone yesterday?” Taylor asked.

Sophia shrugged. “Not really. I ran into that old couple we met last week. The ones down the street? They were a bit short with me. I think I might’ve used the wrong word or something again.”

“Oh, no. They just gave me that look . You know, the whole ‘oh, the foreigner messed up. Let’s awkwardly pretend to be cool with it’ thing. Not a big deal.”

Taylor frowned. “Well, fine, I guess. But I don’t like the idea of people looking down their noses at you.” Sophia didn’t deserve that kind of condescension. Honestly, she was one of the nicest people Taylor knew. If Taylor’s high school self could see Sophia’s present state, she’d probably suspect a Master with a sick sense of humor.

And if that younger version of herself could feel how deeply Taylor had grown to love this ridiculous woman, she’d probably pass out from shock.

Sophia patted Taylor on the wrist. “Taylor, calm down. It’s fine. I just don’t have your gift for languages. I’ll get it eventually. I’m not worried about it.”

“Okay, if you say so.” Taylor fiddled with her mug. “I still don’t think it’s right.”

“Maybe not,” Sophia agreed, smiling into her glass, “but let’s try to get along with them as best we can. It’d be better not to be enemies with the neighborhood.”

“Most of our neighbors like me perfectly fine,” Taylor said. She raised her face, looking down at Sophia from under the rims of her glasses. “Yamada from next door even gave me some recipes for pastries that she made for her kids.”

Sophia laughed, moving the drink away from her face again to avoid choking. “Of course. Did she also try to set you up with her oldest son?”

Taylor’s mocking stare turned into a very toothy grin. She rolled her shoulder, waving the loose sleeve a bit. “Of course not.”

“Ah, of course.” Sophia nodded, moving the glass back up. “I want you to know that even if I find someone who can lift me up and spin me around, I’ll always remember you fondly.”

“I don’t need more than one arm to make you scream,” Taylor said. Sophia made the mistake of drinking during Taylor’s response, causing her to choke on the liquid. Within seconds, she was red faced and coughing all over the table.

Taylor didn’t move to help, watching her adversary snap back to reality by herself while emptying the mug. “That’s just nasty. Our customers use these tables.”

“B-bitch,” Sophia said, muttering the voice in a rasp. “This is why my mom hates you.”

“Your mom loves me,” Taylor said, waving her off. “She calls me the only good thing in your life. She just hates dirty talk. Completely different.”

Sophia glared at her with teary eyes. Taylor reached out, patting Sophia on the cheek. The ring on her finger reflected the sunlight around them.

As the school year started properly, business picked up. A few older students from U.A., a few people who came in early for breakfast before a long work day, and reporters.

Lots and lots of reporters.

Taylor had tensed up the first time a group of them had bustled into the cafe, their media lanyards hanging around their necks. Even after all this time, Taylor still disliked being the center of attention. Fortunately, it seemed that they had simply come in to eat and drink between press conferences.

However, one of them apparently enjoyed their time so much that they wrote an article for a special localities website, leading to a spike in customers.

The reporter had been particularly impressed with their French pastries, much to Taylor’s chagrin. Sophia had insisted on playing up the boulangerie angle for the “exotic factor”, in spite of Taylor’s objections that it was a cheap marketing ploy, and after the article Sophia had been insufferable.

The confections with those stupid little French flags sold out on a daily basis, despite the blatant 20% price hike Taylor had placed on them. Sophia had taken to calling Taylor “ mon amour” and kissing her dramatically.

“Taylor,” Sophia called. Taylor looked up from the accursed article. “I’m elbow deep in an oven-”

A loud crash. A maybe slightly uncouth curse that hopefully nobody in the neighborhood knew how to translate. The sound of dreams and buttery, puffy dough crunching underfoot.

“Okay,” Sophia said, eerily calm as she walked out of the store, specks of flour on her face. “I’ll go out to buy more butter. Do you want anything?”

Her phone was up to snap a picture faster than Sophia could flip her off. In seconds, it was already sent to Sophia’s mom. “No, I’ve got everything I wanted.”

“Great.” Sophia pursed her lips. “Then I’ll leave the cleanup to you.”

Taylor shrugged, picking up the broom as she rounded the corner behind the counter and into the kitchen. She hummed, hitting a random song on the phone and letting it play while she cleaned up the poor lost pastries. She would’ve done the grocery run herself, but with the quantities that Sophia usually wanted, there was no way she could carry it with one hand.

Cleaning up after Sophia had become a habit that Taylor couldn’t complain about. It gave her a routine that didn’t make her feel useless, and it definitely beat standing in front of the oven for hours. She was much better at preparing tea, though. She would challenge half the city to prove her wrong.

The bell over the door rang. Taylor peeked around the doorway and found the customers gathering. It must be time for lunch.

“Welcome!” she shouted. “I will be right there!”

Maybe, she thought. Maybe one day I can find some real peace here .