The depth of feeling Jack has for Rhys alarms him, sometimes.  It’s love, he’s pretty sure.  He wasn’t sure he had the capacity for it anymore.

This was part of a super casual mini-bang put together on the rhackie discord. Big thank you to @zerozomboid and @onediamondpony for the art! This was my first bang and y'all were a joy to work with uwu

When Jack glances at the clock at the bottom of his display after finally completing the evisceration of R&D’s latest budget plan (specially made guns for bullymongs? really??), he sees that it is well on it’s way to 3AM station cycle time.  Leaning back in his chair, Jack rubs at his burning eyes left exhausted from staring at a screen for hours before reaching for his coffee.  Luckily, he realizes that it will be cold before he takes a big ol’ sip of the stuff, then looks blearily across his expansive office to Rhys’s desk to demand a fresh cup.

At first Jack thinks Rhys must have gone home for the night, but after a moment of tired squinting the blob in Rhys’s chair resolves itself into the idiot himself, sleeping at his desk and probably drooling all over his interface.  Jack stares at him for a long moment, wondering why Rhys didn’t just go home without him before remembering the conversation they had had just a handful of hours before when it was ticking past dinner time and Jack showed no signs of being done.

Jack shuts down his own interface and display before rising into a stretch.  His chair is very comfortable and even has all those nice injectors to keep him happy and awake, but that doesn’t stop him from getting stiff while sitting in it for hours with no break.  He really should walk around more but once he gets his teeth in something there’s no pulling him off of it until the task is done, whether that’s slaughtering bandits, a hostile takeover of a rival company, or just writing a scathing message to one of his many moronic employees.

Crossing the room, Jack stands at Rhys’s desk and stares down at him.  He looks like a nerd even in his sleep, but in, like, a cute way, with hair fighting its way free from its styling to flop across his forehead in an unruly forelock.  It’s close to how he looks in the mornings, too, when his hair is all soft from lack of product and curling around his ears.  It makes Jack want to tuck it back behind them himself, just to feel the delicate shell of cartilage beneath his own fingers.

The depth of feeling Jack has for Rhys alarms him, sometimes.  It’s love, he’s pretty sure.  He wasn’t sure he had the capacity for it anymore, after everything that’s happened.  He hasn’t loved many people in his life, and they all left him violently and abruptly.  Sometimes, in moments like these, he thinks of all the ways Rhys could hurt him, constructs elaborate fantasies of Rhys betraying him, of Rhys leaving him, of Rhys just plain fucking dying on him.

Sometimes, Jack thinks about killing him first, before Rhys can slip a knife between his ribs in one way or another.  Thinks about wrapping his hands around Rhys’s pale throat and squeezing, bearing down even while Rhys fights back and claws at his wrists, tries to push him away.  He can practically feel Rhys straining for breath under his palms as he bucks under Jack, trying to get free.

Jack’s hands fit around Rhys’s neck perfectly, like Rhys was made for him to hold like this.  His skin is so soft, especially under his chin where it brushes the edge of Jack’s thumb.  Rhys makes all the noises a dying man makes as he’s being strangled, something Jack has heard many times before, but they’re somehow special coming from Rhys.  Mentally, Jack folds them into a handkerchief and tucks them away in the inside pocket of his jacket for safekeeping.

The fight starts to leave Rhys, his limbs going slack and falling to his sides, but his eyes never leave Jack’s.  Jack watches Rhys watch him as he dies, measures the way the light leaves him as his life slips away.  Eventually, all Jack can see in them is his own reflection, proof that he was the center of Rhys’s universe until his very last moment.  Jack can’t read his own expression, but he knows he doesn’t like it.

Jack lets go like he’s been burned, leaving Rhys’s head to loll back listlessly.  He could fool himself into thinking Rhys was asleep, were it not for how still he is and his blank, lifeless stare.  Livid bruises ring Rhys’s neck, Jack’s signature.  He thinks, if he looks closely enough, he might even be able to see the ridges of his fingerprints left in the bruises. 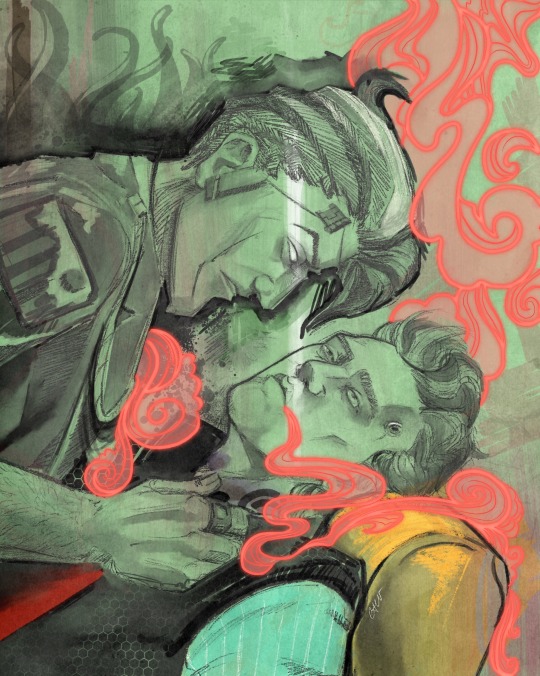 It had all happened too quickly.  Jack isn’t satisfied.  He took everything Rhys gave him and more, and it’s still not enough.  It will never be enough.  He could kill Rhys a thousand times everyday and still need more of him.

Outside of his own head and in the real world, Jack reaches out and brushes his knuckles across Rhys’s cheek.  His skin is just as soft as in his fantasy, but warmer.  He always forgets just how warm Rhys is until he’s touching him.  It grounds Jack, returns him to reality.

Rhys stirs under his hand.  Blinking the sleep from his eyes, he sits up and rubs at his cheek where it had been pressed against his keyboard.

“You wouldn’t have a keyboard imprint on your face if you had gone to bed like I told you to.  You look ridiculous,” Jack chides, the mocking tone not quite concealing the warmth in his voice.  The teasing doesn’t even phase Rhys, although he might just still be too asleep to notice.

“What time is it?” Rhys croaks in reply, voice rusty with sleep.  Without waiting for an answer, he continues, “Ugh, my face.  Why didn’t you wake me up?”

“Because I was working, princess, unlike some people.  Why didn’t you just go to bed, you knew I was gonna be a while.”  Without his input, Jack has found his hand has travelled to Rhys’s hair and is now petting through the strands.  The product that normally holds it in place has faded, leaving it mostly soft against Jack’s fingers.

Rhys leans slightly into the touch, making a little bloom of warmth burst to light in Jack’s chest like a flower or something.  Pouting because he’s always so cranky right after he wakes up, Rhys whines, “I didn’t want to go up without you.” 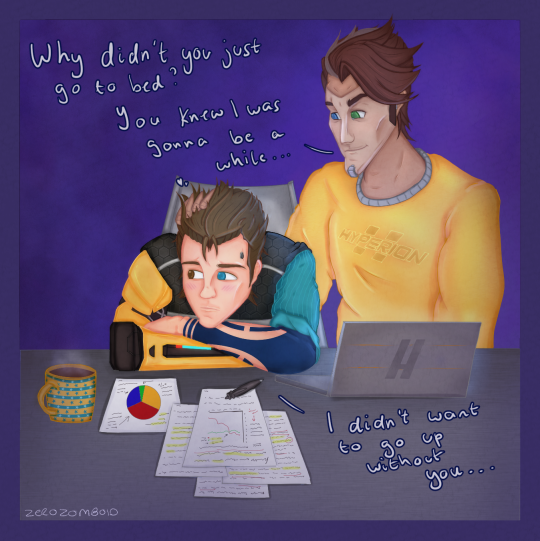 That little bloom of warmth supernovas.  The last cold, clinging vestiges of Jack’s earlier violent fantasy are burned away.

Jack sighs, pretending to be annoyed with Rhys’s attitude, but he can feel the smile creeping onto his face.  Oh well, it’s too damn late to act aloof now when it comes to his capital-F Feelings, and from Rhys’s stubborn stare he won’t let Jack get away with it anyway.

“Well, you got your wish, sweetheart.  Now c’mon, let’s go to bed.”  Taking Rhys’s hand, Jack hauls him easily to his feet and starts herding him towards the door.  Their shoulders brush as they walk together, the ease and comfort of the simple contact still thrilling even now.  Jack wants more, just like he always does, and because it’s his to take he throws an arm over Rhys’s shoulders and pulls him closer.

He can have anything he wants, as long as Rhys is here to take it from.  With tender ease, Jack pecks a possessive kiss to Rhys’s temple and together they go home.

You can find the links to the art included here here and here.