I’m just a vessel without you

“Can I see you later tonight?” Sweet Pea asked, his eyebrows raised in anticipation of her answer.

Polly smirked. “That depends. Can you afford an hour of my time?”

“Ouch.” He said, feigning offence. “And here I thought your rates started with a Burger from Pop’s…”

Polly bit her lip for a second, and she noted that the movement caught his eyes. “Maybe tonight I can make an exception…”

Polly Cooper faces a lonely weekend in a jail cell after she gets caught working for sex on the South Side. By pure coincidence, Sweet Pea is jailed beside her, and their ensuing conversation sparks the beginning of an unlikely friendship.

Tie-in piece to “Our Story’s Not Over” - the background love story that deserves to be told.

Chapter 1: I can throw a dress on, put my lipstick on, and play it cool 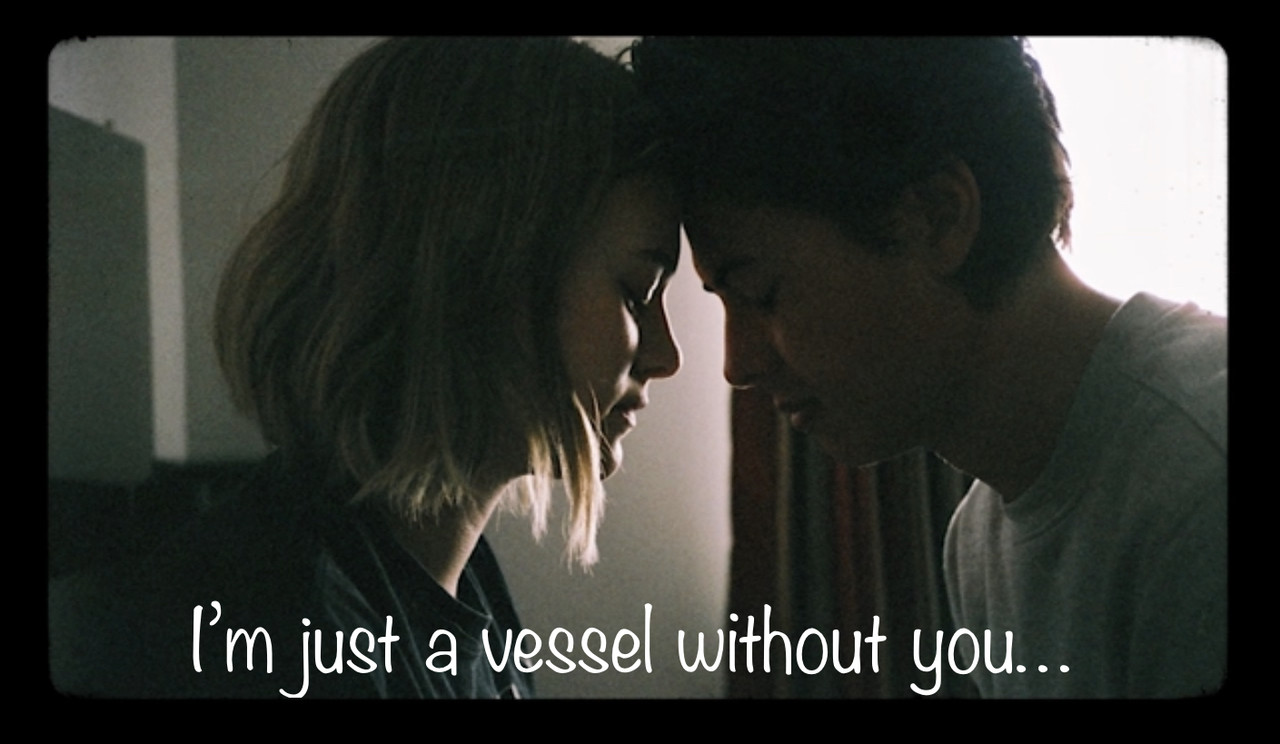 Polly closed her eyes and leaned the back of her head against the cold bricks. She swallowed and tried to will the tears to remain inside her eyes. She was not going to cry, not in this jail cell.

Because Polly was, for the first time in her life, literally in a jail cell inside the Sheriff's department. She could hear the few deputies meandering through the front office, and Sheriff Keller taking phone calls and loudly arguing with whoever was on the other line.

She sighed as she crossed her arms over her chest. Despite the fact that it was almost Summer, the air was cold inside the cell - she’d left her jacket in the backseat of some greasy suit-clad man’s Lamborghini. The deputy who picked her up was unforgiving as he shoved her in the back of his cruiser; it was unlikely she’d ever see her jacket again.

A minor commotion in the front of the office caught Polly’s attention. She heard Keller’s gruff grumble of: “Really? Again, Sweet Pea?” And then the man in question rounded the corner, hands cuffed behind him as a burly deputy shoved him towards the cell beside Polly’s.

The deputy released Sweet Pea from his handcuffs and roughly pushed him inside the cell. Sweet Pea stumbled over to the bench and sat down, crossing his arms and glaring at the deputy as he locked the bars.

“That’s strike two, Sweet Pea.” He muttered as he raised his eyebrows.

The deputy rolled his eyes as he walked away. “Hope you’re comfortable in there, cause you’re not getting out until Monday.” He called out loudly as he rounded the corner.

Sweet Pea glanced at Polly for a moment, and she averted her gaze. She knew who he was; she’d seen him sporadically over the years, coming and going from the house when visiting Jughead, and a few times at Cheryl’s house parties when the red-headed bombshell was home from college - but they’d never had a conversation. She suspected he’d recognise her, and she feared the judgement that she knew was coming.

But then again, he was in jail too…

“What are you in for Cooper?” He asked curiously.

Polly felt her cheeks turning pink as she faced him. He had an intense gaze, and his voice was deep and melodious. “Um…” she cleared her throat, and willed herself to stay calm. “Prostitution…”

He raised his eyebrows. “Damn…” he muttered, and uncrossed his arms. He shifted on the bench to face her properly. “Aren’t you…” he tilted his head to the side. “I thought you worked with social services as a… social worker?” He finished his sentence in a questioning tone.

Polly sighed and relaxed her own arms beside her. “They let go of most of their staff a few months ago… funding cuts, you know.”

“Courtesy of our great mayor, I’m sure.” He gave her a knowing smirk.

She nodded wryly. “So… what are you in for?”

“Oh, the usual.” Sweet Pea said as he moved to sit back against the wall. “Drug possession, resisting arrest… neither of which are felonies.” He tilted his head towards her and grimaced. “Lucky me.”

Polly considered letting their conversation die out there, but the local courts were closed on weekends, which meant she and Sweet Pea were going to be stuck next to each other for the next seventy two hours… so she found herself verbalising an idea. “I thought Toni didn’t let the Serpents get involved with drugs.”

Sweet Pea shrugged. “What Toni doesn’t know won’t hurt her.” He sighed. “Besides, not all of us have rich lawyer girlfriends. Truck driving doesn’t pay for rent and utilities.”

Polly nodded. “I hear that.”

They were both silent for a while, and Polly considered laying across the bench and trying to get some sleep. Then Sweet Pea’s voice cut through the quiet. “This your first time?”

“Your first time. You know, getting thrown in the clink?”

Polly rubbed her left eye with her knuckles. “Yeah…”

He’d shifted on the bench and was now facing her. “Were you working down by the docks?”

Polly looked at him curiously. “Yeah… near the Roving Eye. A lot of out of town businessmen are there on Friday nights.”

“There’s your problem, then.” He said solemnly. “That place is crawling with snitches. And the deputies that patrol the area are loyal to Lodge. If you don’t want to get caught, you should start working at the truck stop.”

Polly eyed him suspiciously. “What’s so different about the truck stop?”

“Heaps of girls are down there turning tricks. Plenty of lonely drivers looking for company.” He said. “If you want in with them though, you’ll have to give Ned a cut of your earnings. He has a pal in the legal ranks - not sure who, exactly - so he gives everyone a heads up when there’s cops around. He’s a pain in the ass, but… if you don’t want to get caught again, the truck stop is your best bet.” He shrugged. “Only place in town where people can earn a living without being hassled by the police.”

She raised her eyebrows. “If you apparently can’t get caught at the truck stop… how did you end up in here?”

Sweet Pea huffed. “I got pulled over for speeding outside my apartment and the cop ‘could smell weed’ so he searched my bike.” He frowned. “I didn’t even have weed. It was Maple Mushrooms.”

“Oooh, the hard stuff.” Polly let out a small snicker. “That’s what I took before I named my kids.”

Sweet Pea grinned at her. “You mean to tell me Juniper and Dagwood aren’t traditional family names? Wow, I’ve been misled.”

She tilted her head to the side. “You know my kids' names?”

“Are you kidding? When Cheryl Blossom wasn’t plotting world domination, those two were the only things she talked about in high school. Apart from Toni Topaz’s ass, of course, though I was never privy to those conversations.”

Polly couldn’t hold in her laugh.

An hour later, Polly mused that being locked up wasn’t quite as scary with Sweet Pea in the cell next to her. It was late by then, probably nearing three in the morning, and Polly found herself rubbing her hands along her arms to try and keep warm, but it was difficult to do so once the deputy on duty turned all the lights off, squashing what minimal heat was left in the jail cells.

Sweet Pea removed his leather jacket and placed it on the bench beside him, then slowly peeled off the flannel button up that was hiding beneath. He stood up, flannel in hand, and approached the bars that separated their cells. “Here.” He said, and reached his hand through the bars, the flannel dangling between his fingers.

Polly stood up, and felt her back protesting with the movement. “Thanks.” She said quietly. She took the shirt from him and smiled. She slid her arms through the long sleeves; the flannel was still warm from his body heat, and smelled deliciously of cologne.

Sweet Pea shrugged one shoulder. “It’s okay. My jacket is warm enough without it.” He turned back towards the bench and laid down on it, keeping his left knee bent up with his foot firmly pressed against the seat. The other leg hung loosely to the ground, and Polly couldn’t help but admire his jean-clad legs.

She shook her head and made her way over to her own bench. It was uncomfortable, and Polly knew she’d be stiff in the morning. But she laid on her side, and pulled Sweet Pea’s shirt tighter around her. She was still cold, but his flannel made a significant difference to her comfort level.

Polly swallowed. “Goodnight.” She said softly, but loud enough for him to hear her.

That night, after Polly had finished fretting about what she would tell her kids, and stressing about what her Mom was going to say to her when she found out where her daughter was - she thought about Sweet Pea. And how he was the first man who knew she was a sex worker and still looked at her like she was worth more than dirt…

This is merely the beginning - in the next chapter, Sweet Pea and Polly meet again at the truck stop, and Sweet Pea protects Polly from a client who won’t take ‘no’ for an answer.

Later, Polly and Sweet Pea start to see each other outside of work, and find they have a lot more in common than either of them realised…