Anteros - Interlude - Visit From an Angel of Death - The Sun Court

In the weeks following the masquerade, and the brutal assassination attempt on the King himself, several people are found dead in their apartments - all apparently suicides, many from poisons. The court is abuzz with gossip and rumor. One popular theory is that the poor souls had masquerade liaisons, and discovering the identity of their masked paramour was so shameful or upsetting, it drove them to suicide. Others with longer memories worry it's l'affaire des poisons all over again, whispering about poisonings and witchcraft. A few particularly savvy and well informed individuals realize that many of the newly dead were themselves connected to members of the court who had suffered ultimately deaths. Perhaps those deaths weren't as natural as they had ultimately been ruled to be, and these suicides were admissions of guilt? While unsettling news, most members of the court are not overly bothered. After all, it's not like these deaths are murders, and whatever their secret sins, they'd never be so melodramatic as to kill themselves over them.

Please mind the tags! Story contains a supernatural being compelling a person to commit suicide as a means of atonement. Vibe of the scene very much inspired by the scene where Bill meets Death in "Meet Joe Black" but with more murder.
---
This is a short story about a character I'm playing in a Greek God's text RP. In this game setting, after they heyday of Greek Mythology the gods go through cycles of "sleeping" and "awakening." They go to sleep when major religions change, they're no longer needed, or they just get bored with an era. When they re-awaken, they roughly know they're gods or immortals, and have powers over their domains and can easily influence mortals, but their memories of past eras are muddled if not missing altogether. They're also tethered to the mortal realm and cannot reach Olympus or Hades.

One of the eras of play is the Sun Court of King Louis XIV in the 1690s, and this story is a follow up to a Masquerade event we had.

Anteros' behavior in that era of play is heavily inspired by the way his mythos was re-interpreted and altered by Christian Europeans from its Greek origins to fit with Church doctrine around morality, love, and sex. See the end notes for more info about Anteros in mythology and how I'm interpreting him.

"Before the entrance to the Akademia (Academy) [outside Athens] is an altar to Eros (Love), with an inscription that Kharmos (Charmus) was the first Athenian to dedicate an altar to that god. The altar within the city called the altar of Anteros (Love Avenged) they say was dedicated by resident aliens, because the Athenian Meles, spurning the love of Timagoras, a resident alien, bade him ascend to the highest point of the rock and cast himself down. When Meles saw that Timagoras was dead, he suffered such pangs of remorse that he threw himself from the same rock and so died. From this time the resident aliens worshiped as Anteros the avenging spirit of Timagoras." - Pausanias, Description of Greece 1. 30. 1 (trans. Jones) (Greek travelogue C2nd A.D.) [source: thoi.com]

After finishing helping him undress for the night, Pierre de Rebille dismisses his remaining staff to their beds and sits down at his desk to write a letter to his newest paramour. He'd met the girl at the masquerade, and known her for the sister of political rival immediately. Foolish woman was already completely besotted and it wouldn't take much longer to get her to willingly divulge her bother's secrets to him.

A strong wind enters through the window, scattering the papers from his desk onto the floor. He scrambles to retrieve them. Wasn't that window closed?

"And God spake all these words, saying, I am the Lord thy God, which have brought thee out of the land of Egypt, out of the house of bondage. Thou shalt have no other gods before me."

He turns around, looking for the source of the voice. He sees no one.

"Thou shalt not make unto thee any graven image, or any likeness of any thing that is in heaven above, or that is in the earth beneath, or that is in the water under the earth: thou shalt not bow down thyself to them, nor serve them: for I the Lord thy God am a jealous God, visiting the iniquity of the fathers upon the children unto the third and fourth generation of them that hate me; and shewing mercy unto thousands of them that love me, and keep My commandments."

"Who's there?" he casts his eyes about to the shadowy corners, and sees nothing.

"Thou shalt not take the name of the Lord thy God in vain; for the Lord will not hold him guiltless that taketh his name in vain."

He stands from his desk, his heart in this throat. "Show yourself!"

Quick strides take him to the windows, and he pulls the curtains back to find nothing.

"Honour thy father and thy mother: that thy days may be long upon the land which the Lord thy God giveth thee."

He looks under the bed.

He throws open the doors of the bureau.

He throws open the door to the adjoined sitting room. It too is empty.

"And all the people saw the thunderings, and the lightnings, and the noise of the trumpet, and the mountain smoking: and when the people saw it, they removed, and stood afar off. And they said unto Moses, speak thou with us and we will hear; but let not God speak with us, lest we die. And Moses said unto the people, fear not; for God has come to test you, and that His fear may be before your faces, that ye sin not."

It is then that he realizes, the voice is not resonating about the room, but within his own head. Fear licks down his spine.

"Pierre de Rebille. You have forgotten to fear the Lord your God, and thus have sinned against Him."

Suddenly, Pierre is overwhelmed with emotion. Love, pain, fear, anguish. He collapses to his knees.

"You coveted the favor Jean du Roure held with the Marquis de Barbezieux. You seduced his daughter with false promises of love and marraige, and used the access your liasons granted you to her father's apartments to plant stolen confidential documents in his study. You bore false witness against him to the Marquis. When his daughter realized what you had done and threatened to expose you, you poisoned her and staged it as a suicide brought on by the shame of her father's guilt. You played the distraught fiance well. The Marquis de Barbezieux believed you, and had an anguished Jean du Roure was executed for high treason for stealing military secrets."

He is in agony. It feels like his heart has shattered into a thousand pieces. Gut wrenching sobs wrack his frame as his very soul bleeds with the deepest pain of betrayal and grief he has ever felt. He feels used; chewed up and spat out

"What you are feeling right now? It is what she felt. What her father felt. This is the suffering and pain you have caused with your sin."


"Please. Make it stop." He begs, shivering on the cold floor of his apartment.

A shadow falls over him, and he looks up to see what has caused it and gasps. The awesome figure hovers several feet off the ground. Backlit as he is, the moonlight halos his golden hair and the two powerful white wings at his back almost seem to glow. Clad in armor and with a sword in hand, he does not need to ask the figure his name, for clearly it is the Archangel Michael come to visit him.

"The time of judgement is upon you Pierre de Rebille. You must answer for your sins and repent, lest you be cast into the fiery pits of hell to suffer for all eternity for your crimes against man and God." This is the first time the figure has spoken aloud, and his voice is like ice tho a righteous fire burns in his eyes.

"Please. I'll do anything. Whatever you say." Pierre's face is stained with snot and tears, his voice raw and cracking from his sobs. It feels like he'll never be happy again, the maw of regret and sorrow so wide and deep within his spirit.

"Go to your desk, and write your confession." The angel commands, and Pierre rushes to obey. He scrabbles to his scattered papers, groping frantically for pen and ink, and breathlessly pours his soul out onto the page, all his sins laid bare. The angel stands impassively and watches, his gaze an oppressive and unyielding weight at Pierre's back as he writes.

"I'm finished. Please. End my suffering. I can't live like this." He holds out his confession to the angel like an offering, hands shaking.

"Only you have the power to end your suffering Pierre de Rebille. Die, as she did, and maybe then God will deem your soul cleansed enough to escape damnation." The angel's voice is as cold and unforgiving as marble, but the hint of a hateful snarl lurks in his otherwise impassive and handsome face.

Pierre has no poison, but a glint on his bedside table catches his eye - the moonlight catching the polished silver of his dagger's hilt. A calm serenity washes over him, and he weeps in relief, knowing he will soon find peace. 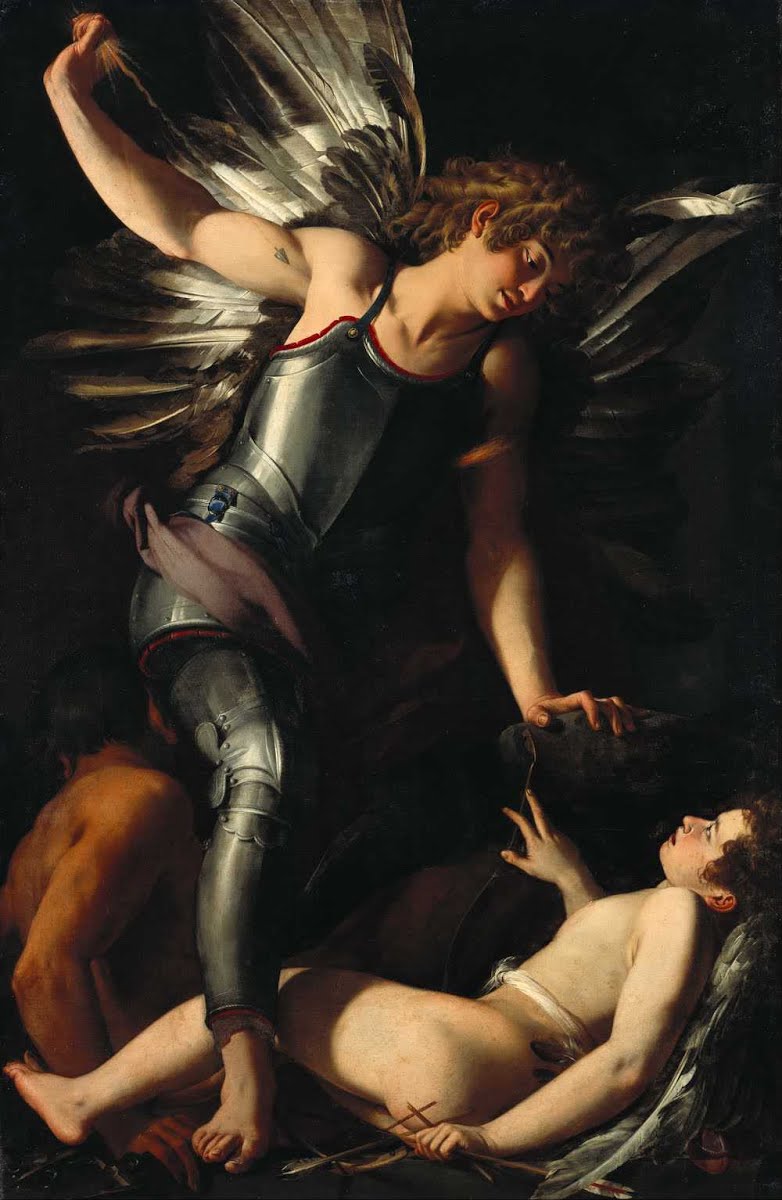 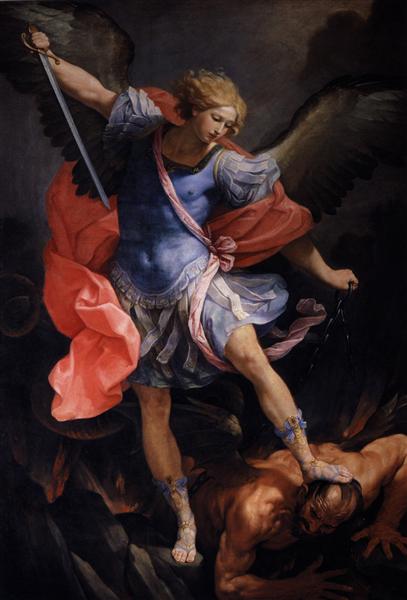 "Antiquity was well aware of the competition between Eros and Anteros for the soul of man. If the two are reconciled, then perfect love is achieved. In contrast with this, Baglione’s picture, according to the official church teaching of his time, aims at the subjugation of earthly love. The divine Eros, reminiscent of the falling St. Michael, is drawing back his arms for the final thrust." [Source: google arts]

In Greek Mythology, Anteros is the god of requited love, literally "love returned" or "counterpart love." He is the son of Ares and Aprhodite and either Eros' twin or younger brother (depending on the source). He is also famously the avenger of "unrequited love" - earning an altar in Athens for avenging the death of a resident immigrant who was rejected by being told to literally jump of a cliff and then did so to prove his love (the quote that kicked off this story).

I'm choosing to interpret Anteros' "avenger" aspect for the purposes of my RP as more about not allowing people to abuse the love of others, rather than in a gross "you're obligated to return the affections of the people who confess to you" way. So like, if you reject someone kindly he's got no issue, but if you do it in a way intended to cause harm then he's gonna come for you. My Anteros will also avenge the victims of people who react to romantic or sexual rejection with violence or, as is the case in this story, who use the trappings of requited love for nefarious or abusive purposes.

You can find more info on Anteros from classic Greek and Roman literature at theoi.com

RockerRema13 as well as 1 guest left kudos on this work!