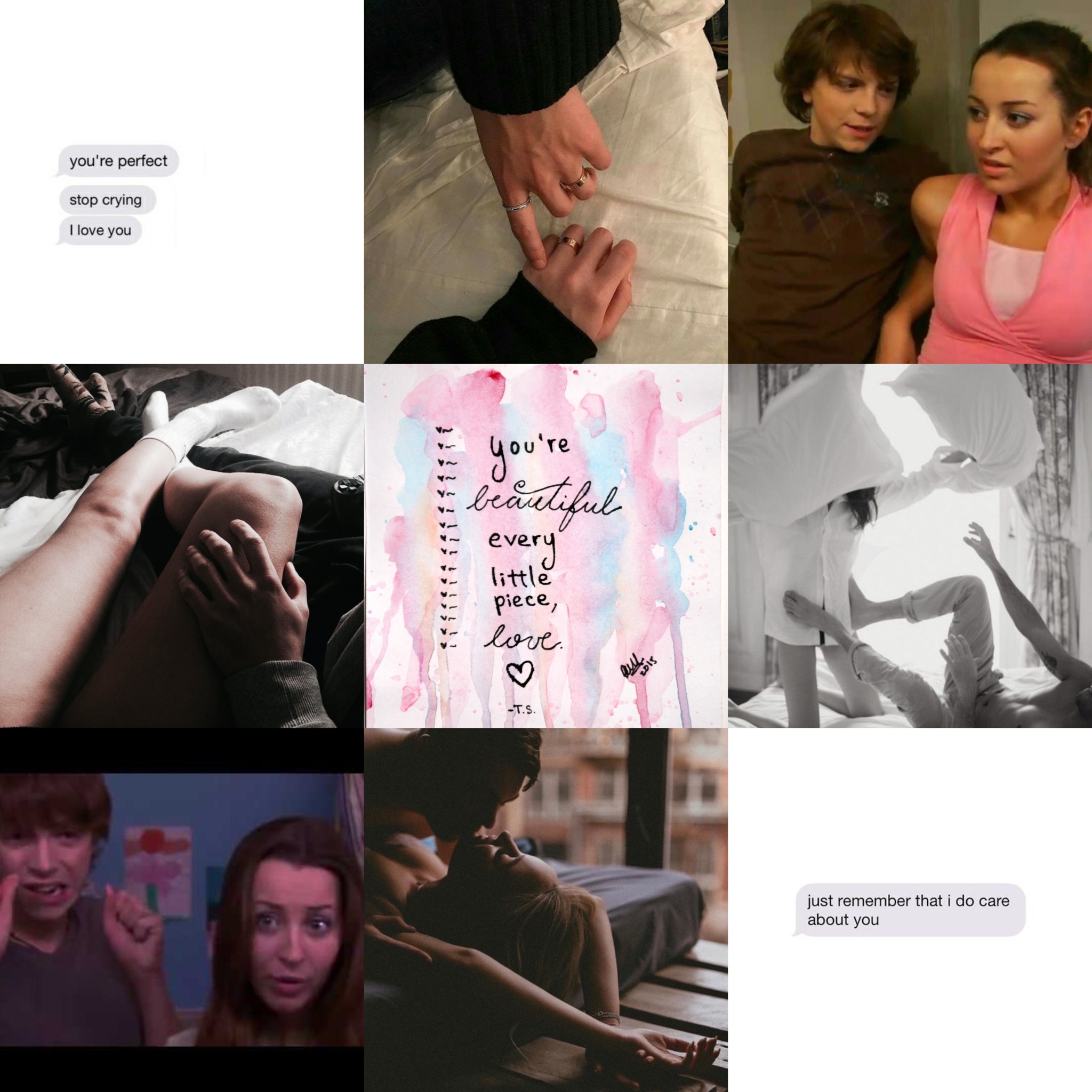 It starts the summer before college.

Okay, fine. The feelings start years prior, but the secrets, the long touches, the staying up all night talking without running out of things to say… that starts on a summer night Casey will never forget.

She sits quietly on the doc watching the moon illuminate the large lake. She plays with the blue lace of her thin nightgown and mentally makes a pros and cons list. Her brain has stopped since Jesse told her the news of New York.

Would she be stupid to give up a once-in-a-lifetime dream for a postponable education? She’s the responsible one. The one her siblings look up to. What example is she setting if she runs off to New York with a boy she hardly knows to follow a silly dream?

She brings her knees to her chest, hugging them tightly. She shakes her head, trying to clear away a haunting thought.

His new dark hair makes his brown eyes even more enticing. The specs of gold and green in his chocolate orbs make her feel like she’s exploring a beautiful jungle. But she can’t feel like that, she shouldn’t know about the specs in her stepbrother’s eyes.

The way he smiled at her as he pulls her away from Jesse’s kiss to dance - fuck.

Casey can’t even tell you what song was playing. His smile is the only incentive she needs to dance wildly with him. Hopping around the floor, his arm around her waist pulling her close, her grandmother’s disapproving eyes. He picks her to dance with over his beautiful summer fling. A girl Casey can’t even recall the name of. How silly is that? This girl helped save her grandmother’s career and home, and she can’t recall her name. Only that Derek kissed her, at least she assumed. But right then it was Casey in Derek’s arms. They spun in circles, in their own little world. Neither noticed the knowing look in Roxy’s eyes as she left the party, knowing she’ll never see Venturi boy again.

She finally accepts it as she throws her head back, letting out a heavy sigh and cursing the moon. He got into college. Not just that, a good college. One up to par with Casey, and part of her knows his choice in attending Queens has little to do with their hockey program.

Derek is cocky, arrogant. He knows when he walks into a room he turns heads. At the same time, Derek is self-conscious, anxious. He worries with every step he’s going to ruin his life. He doesn’t see his heart of gold and that when he actually puts in the effort, his genius mind. He’s going to make his dreams come true. With or without Casey and as Casey curses at the moon she knows she wants to be by his side. Always.

A deep clearing voice startles her from her inward debate, she almost falls into the lake if it wasn’t for Derek’s quick actions. He dashes down doc and has Casey around the waist in seconds. As they stumble backward, hitting the wood with a hard thud, Derek throws his head back in laughter.

“First I find you talking to yourself and then I have to save you from drowning. You really think you can take on a big American city without me, Case?” His smile is teasing, but his eyes are filled with fear and worry.

She rolls her blue eyes and smirks, “In case you haven’t noticed I’m a big girl now. I can handle New York.”

They settle beside each other at the end of the doc. Their bare feet hang over the edge, occasionally grazing the cold water top. They’re silent for a long beat before Derek’s hand inches closer to Casey's until his pinky lays on top of hers.

“I know you could handle yourself, New York couldn’t handle you.” he laughs.

Damn him and his smile. His perfect smile that manages to brighten even the most anxious of days in Casey’s world. She studies him for a long moment, taking the image in. Making a copy in her mind to save for nights without him, nights he isn’t by her side taking her breath away and infuriating her all in one sentence.

“Please, you just don’t want to go off to college without me.” She playfully nudges his shoulder, smiling at him.

“Oh, totally. I was so thrilled to continue sharing a bathroom with you, to deal with your living room ballets, and for god's sake how will I live without your weekly meltdowns.” he flashes her his famous grin.

She looks at her feet, concentrates on their reflection in the water, trying to decide if his sarcasm holds any real malice or worse… any truth.

His breathy sigh brings her out of her anxious thoughts, “Just remember, that I care about you. More than some dancer boy you met last week.”

She turns to him with a gasp. Her mouth, wide open in shock.

'Are we really doing this, here, at my grandmother’s place?'

“Close your mouth Case, you’ll attract flies.” He places a hand under her chin, they both ignore their shiver. “Is it really a surprise? We’ve been dancing around this for years… I thought… I thought you knew.”

He looks down in shame, he begins to drop his hand, she grabs it without a second thought.

“I do know. I mean I wasn’t sure. I made lists, but there are always doubts, and there’s so many reasons for us to keep dancing around it because fuck Derek we’re step-”

He cuts her off with a kiss. Their first kiss that’s far too heated to be the first kiss, but it’s Derek and Casey and we’re lucky they didn't tear each other’s clothes off years ago.

The next morning they wake up curled together on the futon in her grandmother’s dance studio. A heavy quilt covering their bodies. Their eyes open, they get lost for a moment before breaking into a smile. He leans to kiss her, but she jumps to her feet on the mattress, pillow in hand.

Derek’s White Stripes t-shirt barely reaches mid-thigh as she raises her arms, preparing to swing jokingly at him.

“Oh, you’re so on.” He says with a laugh as he also jumps to his feet, armed with a pillow. She’s distracted by the delicate piece of skin just above the waistband of his sweats and how she now knows how sensitive that patch of skin is. He’s able to get a pillow attack in while she’s daydreaming on what’s beneath that patch of skin.

They giggle and wrestle and steal kisses until a bitter voice interrupts.

“Casey?” Jesse yells in disbelief. His eyes hold betrayal, anger, disgust. She meets his eyes and simply doesn’t care. That is until he opens his mouth again. “I take it that’s why you decided against New York. You’re too busy fucking your brother.”

Casey begins to apologize, but Derek is quick to protectively jump in front of her, ready to battle on her behalf.

“You have no right-” She places a hand on his shoulder, she can fight her own battles. It’s what he loves about her.

He turns to her, forgetting the other man in the room instantly.

She smiles at him until Jesse interrupts.

“So, you’d be playing the role of a supportive brother had she chosen me? Had she chosen to be a star, to follow her dreams?”

“Yes. Because I know Casey, and I know me and I know no matter what once she’s found everything she’s looking for out there, the world will lead us back to each other.” She melts as his sweet speech until, “Also dude chill, we’re step siblings I’m not her brother. I’ve never been her brother.”

“Der-ek, stop, and Jesse, don’t act like you know my dream. I love dance. I always will, and I’m sure I’ll continue to dance in college, but it isn’t my dream. Derek knows how important college is, my future is, and he’s right had I chosen dance that wouldn't have meant a future for you and me because my heart is Derek’s. I’m sorry Jesse.”

Jesse scoffs, “You’re making the biggest mistake of your life.” he says before leaving Derek and Casey alone to deal with Casey’s panic.

She cries once the door slams.

Derek instantly panics, tears and him don’t add up. He doesn’t know what to do. He acts on instinct, grabbing her in his arms, holding her tightly.

He whispers in her ear, “Case you’re smart and kind, and just a fucking fantastic person. Oh, and by the way, beautiful,” she smiles weakly at him, “and just please stop crying, I love you.”

Her eyes widened in shock. She knows, she’s known, just as he has, but hearing the words out loud makes this so real.

Not that last night, their kisses, their bodies learning to move together, not that that didn’t make it real, but the words… it’s different.

I hope you enjoyed what my stressed brain fed Taylor Swift birthed haha.