Hiya, my name is Vivienne Abiba, and I always dreamed about being whisked away to a magical world. Going on adventures while making friends (and maybe finding a romantic interest) along the way. I didn't think it would actually happen though!

Now I find myself in this twisted world filled with magic and peril that is oddly similar to some of my favorite stories as a child. Luckily, someone else named Yuu is in the same boat as me so I'm not alone. I only intended to survive long enough with Yuu until we found a way back to our world, but fate has other plans. A certain wild upperclassman keeps popping up and causing even more craziness!

He's just a crazy Pool Noodle. I don't know why I keep getting flustered with him around. If this keeps up though...it might be hard for me to leave. 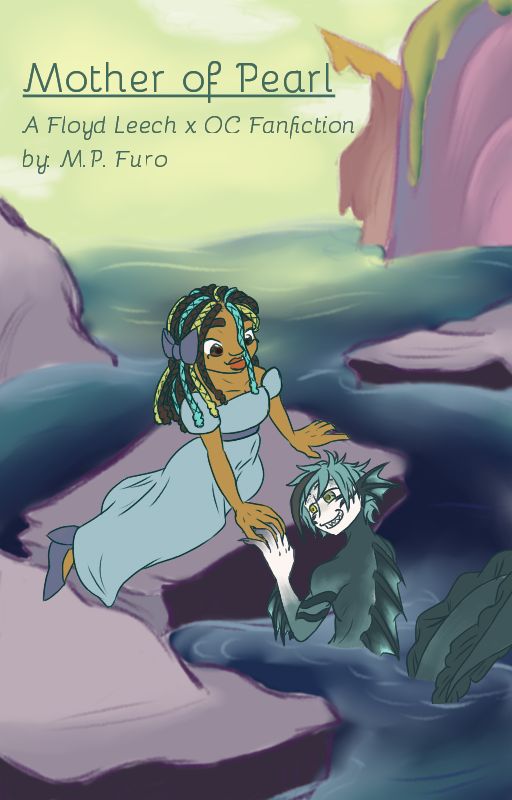 "Wendy, haven't I warned you?" a middle-aged man huffed. "Stuffing the boys' head with a lot of silly stories."

A girl and two smaller boys were busy cleaning up their extravagant game of pretending. They seemed unphased by their father's tantrum but worried nonetheless.

The Wendy-girl gasped at her father's words, "Oh but they aren't!"

"I say they are! Young lady, this is your last night in the nursery."

The dream started to fade as everyone began to protest.

To be punished just for being a kid. That doesn't seem very fair!

"Yuu! Yuu, wake up! The Great Grim demands it!" the shrill voice of a certain companion swept the last bits of the dream away.

"Grim please, I'm still recovering from the Un-Birthday Party yesterday. Go back to sleep," the groggy voice of the magicless human Yuu whined. They pulled the covers over their head.

"But those card punks are waiting downstairs. That tyrant Riddle says he got news for you," Grim pulled the covers back. "They won't leave without you."

"Fine! Yeesh," Yuu rolled out of bed. They mumbled incoherently as they put on their uniform and went to the living room of the hazard called Ramshackle. Waiting for them were all the guys from Hearslabyul. Riddle sat in one of the few decent chairs with his usually stern face. Ace and Deuce stood on the one side of him with bewildered looks while Trey and Cater had confused looks mixed with worry on the other side.

Yuu sighed as Grim stood next to them, "I expect this from Ace and Deuce, but what brings all of you here so early?"

"The Headmaster has called for all the dorm leaders. I was told to get you since you are technically the leader of Ramshackle dorm," Riddle informed. "Sorry for the intrusion."

"What about the others?" Grim questioned.

"We just had to see Dorm-Leader Yuu's reaction after we found out what the meeting was about!" Ace cut in.

"After you and Deuce eavesdropped that is," Trey laughed.

"Well let's hear it. What does Crowley want from Yuu?" Grim groaned.

"Apparently there was an incident with the doors," Cater chimed in.

"Where we entered during the entrance ceremony," Deuce explained.

Yuu nodded, "The coffin room. Got it."

"Get to the point already!" Grim yelled. Even the three ghosts of Ramshackle popped in to listen at this point.

Riddle cleared his throat and all the attention went back to him. "Someone came through a door, and they appear to be from the same world as you, Yuu."

Did someone come through from my world? Really?! But, why now? Why not at the same time as me? Would they have a better memory of what happened?

"Yuu!" Deuce and Ace were waving their hands in front of their pal's face.

"We need to go," Yuu mumbled. They were still reeling from shock, "Like now." They picked up Grim and ran out of the room to the front door.

"Prefect Yuu slow down!" Riddle called after them. He stood up from his seat and was hot on Yuu's trail. Ace and Deuce ran off next. Trey and Cater just sighed and lagged behind.

Soon they made it to the mirror chamber. They stood outside the room catching their breath. Riddle smoothed his blazer and addressed his vice dorm leader, "Trey, take the others back to the dorm. This is a matter for dorm leaders only. Those are the rules."

"Ehh, but we want to know too!" Ace crossed his arms.

"We'll fill you in afterward. Just wait a while please," Yuu assured.

"What about me? Do I have to go with these knuckleheads?" Grim complained.

"Who are you calling a knucklehead you damn Racoon-cat?" Ace groaned.

"Technically we are one student, so it shouldn't hurt. Just be on your best behavior," Yuu warned.

"Yahoo!" Grim pumped his paw into the air.

"Now come on you two," Riddle sighed. He opened the door and they joined the other dorm leaders and Crowley.