The group of five picked up their pace as soon as Emily pointed the structure out. The sun was setting fast on the horizon, and Derek knew it would be too dark to see soon enough.

The drastic change in speed made Derek’s leg scream in agony, but he kept up. It must have been adrenaline.

They sped through snow they had been dragging their feet through before; in Derek’s mind they were going as fast as a car.

A clearing in the trees approached much quicker than he would have thought. The structure had looked much farther away from below.

The building (House? Cabin? Castle?) was tall and wide. The front porch and right side of the house looked like something straight out of the Smoky Mountains, large wooden planks as well as, seemingly, mud mortar. The other half of the house, and the main structure that looked reminiscent of a bell tower, looked medieval in origin, with stonework and gothic arched windows.

It was, in essence, the oddest edifice he’d ever seen.

Principal Lassiter took a step onto the porch, placing himself in front of the teens. They stepped up behind him.

He knocked roughly, knuckle rasping at the door three times.

For a moment, nothing happened, but then they heard a door lock unlatch before it swung open.

There was a short man in the entry. He had shock white hair and was wearing semi-formal clothing. There was a stern expression on his face, the kind a disappointed grandparent would give a troublesome child.

“Can I help you?” The man’s voice was much deeper than Derek would have imagined.

Mr. Lassiter spoke hesitantly, “Yes, uh, hello. You see, my students and I have just been in a bus crash and, uh, would you mind terribly if we stayed here for the time being? Or at least use your phone to call emergency services?”

The small man’s expression did not change, seemingly unaffected by the shocking news of their misfortune, “It is not my place to say; I am just the butler. However, for the time being, you can come into the foyer. I will go fetch the master.”

The little man spun around on his feet, walking down a long, dark hallway as the group cautiously entered the house.

Just in the front room alone, Derek could see the inside was lavishly furnished. A barely visible living room had a grand fireplace (a place Derek would very much like to be right now) as well as medieval inspired, but luxurious looking, lounge chairs. The foyer had one chair in the corner. It wasn’t cushioned, but in Derek’s eyes it looked incredibly comfortable.

Just as Derek was going over to take his seat, however, Mr. Lassiter beat him to it.

At first, Derek felt miffed at that, seeing as he was injured, but soon his anger faded. It’s not like he told anyone he was hurt, and, plus, Mr. Lassiter could be hurt too. The man had to be, at least, in his late forties if not his mid-fifties as well. He deserved the seat more than Derek.

Footsteps sounded from the corridor. Lassiter stood up from his chair and the three other teens stood a bit more at attention. Derek stayed slightly hunched over, leaning on a wall.

The small butler from earlier rounded the corner, flanked by a tall figure.

The new man was younger, possibly mid-thirties, and built like a basketball player. He was pale-skinned and had slicked back raven hair.

If the man was Dracula, Derek guessed that made him Jonathan Harker. Or worse, it meant he paid attention in English class.

As Derek shuddered at that horrifying thought, Dracula spoke, “I have been told of your misfortune tonight. My deepest sympathies.” His expression formed into something regretful, “I am afraid we have no phone here, but you are more than welcome to stay the night. I can have Gregorian drive you to town tomorrow morning.”

Ah so the little man’s name was Gregorian.

Lassiter practically leapt for joy when he went to shake Dracula’s hand, “Thank you so much, uh…?”

Dear god, he was Dracula.

“No, not you. Him.” The vampire pointed at Derek.

Oh shit. Could this guy smell his blood?

Derek looked like a deer caught in the headlights, “W-what do you mean?” he gulped.

The man moved his finger to the floor at Derek’s feet. He looked down.

To Derek’s horror, a small, but growing pool of crimson was forming on the tiles at his right foot.

Derek swayed, black spots dancing along the corners of his vision. Someone steadied him, slinging his arm around their shoulder. He looked up only to meet the red-brown eyes of Dracula himself.

The man looked away from him, turning to look at Gregorian, “Go get the first aid supplies and bring them into the parlor.”

The butler dutifully nodded before running off.

Vlad shifted him into motion and they slowly managed their way into the parlor, the room Derek had been admiring before. The four other individuals followed.

Dracula set him down onto one of the lounge chairs. Derek felt guilty now. He was probably going to get blood all over it. At least the floor was just stone instead of rug.

The man briefly left before coming back with Gregorian who was holding a small box and a bottle of peroxide.

"We’re not leaving you, dude.” Sam bravely stated, but when Gregorian lifted the jean material off his right ankle, Sam turned an impossible shade of green and immediately left the room.

Emily was facing the opposite direction and Casey looked like she was about to cry.

Derek winced. He really hadn’t wanted Casey to see how bad it was, but now it was too late.

Gregorian spoke, “I agree with the boy. This needs stitches and I don’t need any unnecessary distractions while I’m doing so.”

“Stitches! I can’t just allow you to operate on my student! We don’t even know who you are!” Lassiter burst out, a very odd display from the usually mild-mannered man.

Vlad frowned, “Sir, I am greatly appreciative that you care for your student, but I can assure you that Gregorian knows what he is doing. He was a military doctor. Derek has lost a lot of blood. If this doesn’t get taken care of now…” The implication was clear.

“Alright…alright.” Mr. Lassiter turned to leave the room, bringing Emily and Casey along with him.

“Wait!” Derek shouted, “Can-can Casey stay?” Where had that come from?

He was silent for a moment, “Yes she can stay, but only if she doesn’t make any disturbances.”

Derek looked up at Casey, who was sporting a surprisingly determined expression on her face, “I’ll stay.” She pulled up a stool beside the chair Derek was in.

“Why did you want me to stay?” Casey whispered gently.

“I don’t know…I just feel safer when I’m with you…” Oh, Jesus, now the blood loss was making him say crazy things.

Casey was still but said nothing in response.

The butler turned around, holding a needle with some kind of thread on it. Derek tensed, instinctively grabbing Casey’s hand tightly. To his surprise, she did not pull away, and instead gently squeezed back in encouragement.

“Alright, this may hurt,” the little man kneeled down at his ankle, “a lot.”

Gregorian plunged the needle into his skin without warning. Derek let out a strangled scream before the pain got to be too much.

Blackness consumed his vision before he knew no more. 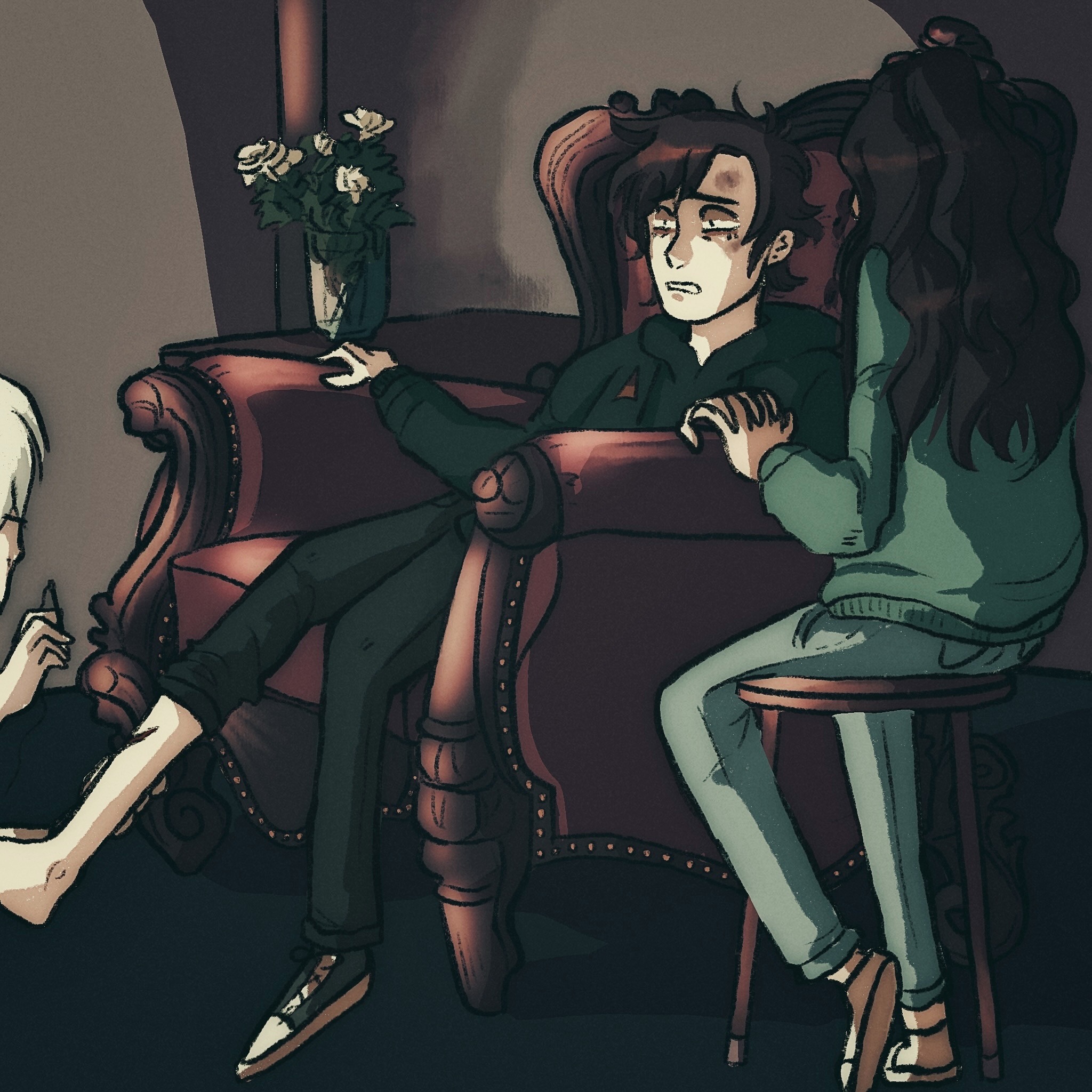