derek puts on his worried shoes

He sat there, raggedly breathing and shaking.

A shoe came from nowhere and kicked the white powder over his vomit. It startled him severely, causing him to flinch backward like he’d been slapped.

Derek looked up, catching the blurred face of Principal Lassiter. The man’s mouth was moving, but Derek couldn’t make out what he was saying. He looked down again, shutting his eyes tightly.

“Derek,” The voice of Lassiter was muted and muffled, “Derek, please look at me.”

“Derek, kid, please, can you just open your eyes for me?” He felt a gentle hand place itself on his shoulder. He didn’t flinch this time.

He hesitantly opened his eyes, vision much clearer. He was met with the face of a very concerned Lassiter kneeling on the ground in front of him.

“Sorry.” Derek inwardly winced at how weak and raspy his voice sounded.

He probably wasn’t used to the Derek Venturi apologizing for anything.

Mr. Lassiter offered Derek a hand, “Alright we need to get moving. We can’t stay out here all night.”

Derek gratefully took the hand and feebly lifted himself off the ground. When his right leg started to support his weight, he swayed backwards a bit from pain. Mr. Lassiter steadied him, most likely assuming it was the aftereffects of his panic attack.

Derek looked up, only now noticing the worried faces of his friends. He felt his face heat up in embarrassment for losing it like that in front of them, especially Casey.

“Alright, freak show’s over. Let’s get moving.” Derek halfheartedly joked. No one laughed.

He took a longer look at Casey. She seemed terrified. She was staring at him, eyebrows upturned in unease. However, the slowly dimming lights from the school bus cast eerie shadows on her face, almost making her expression seem judgmental.

“Students, let’s not just wait around. We need to find shelter.” Mr. Lassiter motioned for them all to begin walking. They, for once, followed his directions.

Derek got closer to the group, trying to hide his limp by trudging through the snow a little deeper. It was agony.

He noticed Sam lagging behind a bit before he turned to Derek, softly whispering, “Hey, man. You okay?”

“What so now you care?” Derek bit back.

Sam didn’t respond, and instead looked surprised, and a bit hurt.

Derek’s irrational burst of anger faded immediately, “I’m sorry. I’m sorry. I don’t know what’s going on with me right now.” He rubbed his hand over his face.

“It’s okay dude. I get it.” Sam gave him a comforting smile before sobering, “That must have been some pretty messed up shit you saw.”

Derek turned his head around, glancing at the bus that had become the driver’s grave and tomb, it’s lights nearly diminished.

He whispered for only himself to hear, “Goodbye Mr. Saluca.”

“What was that?” Sam asked.

Derek looked back one last time to pay his respects. To his horror, he noticed a blood trail coming from their path. It was his. He selfconsciously began trudging deeper into the snow to cover for his injury. 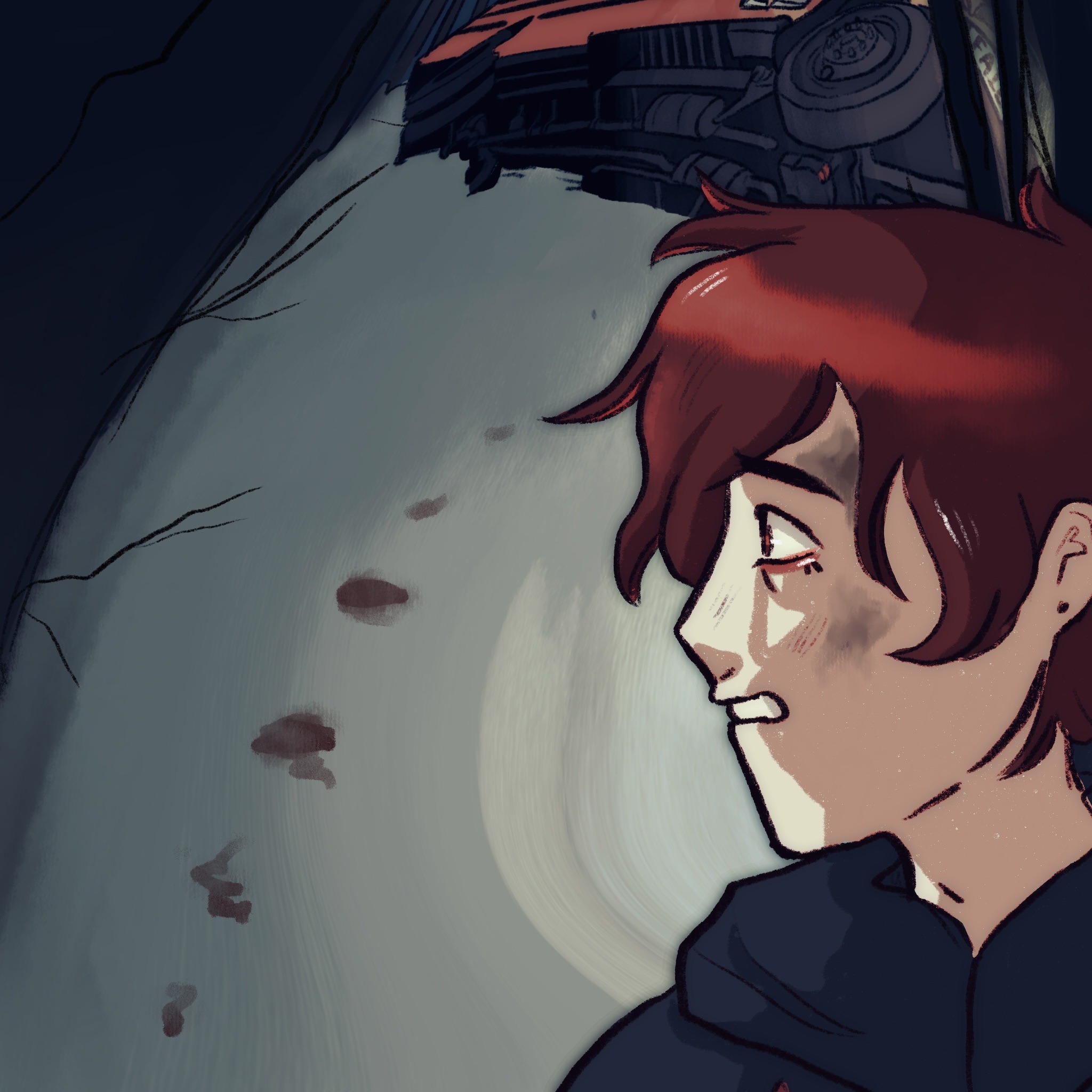 His leg burned. If they didn’t find a shelter soon, he was sure he would pass out.

The group of five travelled further and further into the forest, the trees growing denser and thicker as time passed. The sun dimmed, threateningly, beyond the canopy, causing the temperature to grow colder.

Derek found himself wishing he had taken Nora’s advice and put on an extra jacket over his hoodie, but he had been insistent that it wasn’t necessary. Oh, how wrong he had been.

The entire group was shivering as they hiked.

Casey looked so cold, Derek was almost tempted to hand her his hoodie, but that would’ve been stupid. He didn’t have a death wish.

The five of them approached a clearing; the pink and orange sky faded into deep blue overhead. It would have been pretty had they not all been so tired and frightened.

Emily’s voice rang out above the silence, “Look over there!” She was pointing a bit to their left.

Derek followed her direction, his gaze settling in on a structure not too far in the distance.

It looked like a woodland cabin had decided to merge with a medieval castle, but the odd architecture didn’t matter to him at all. 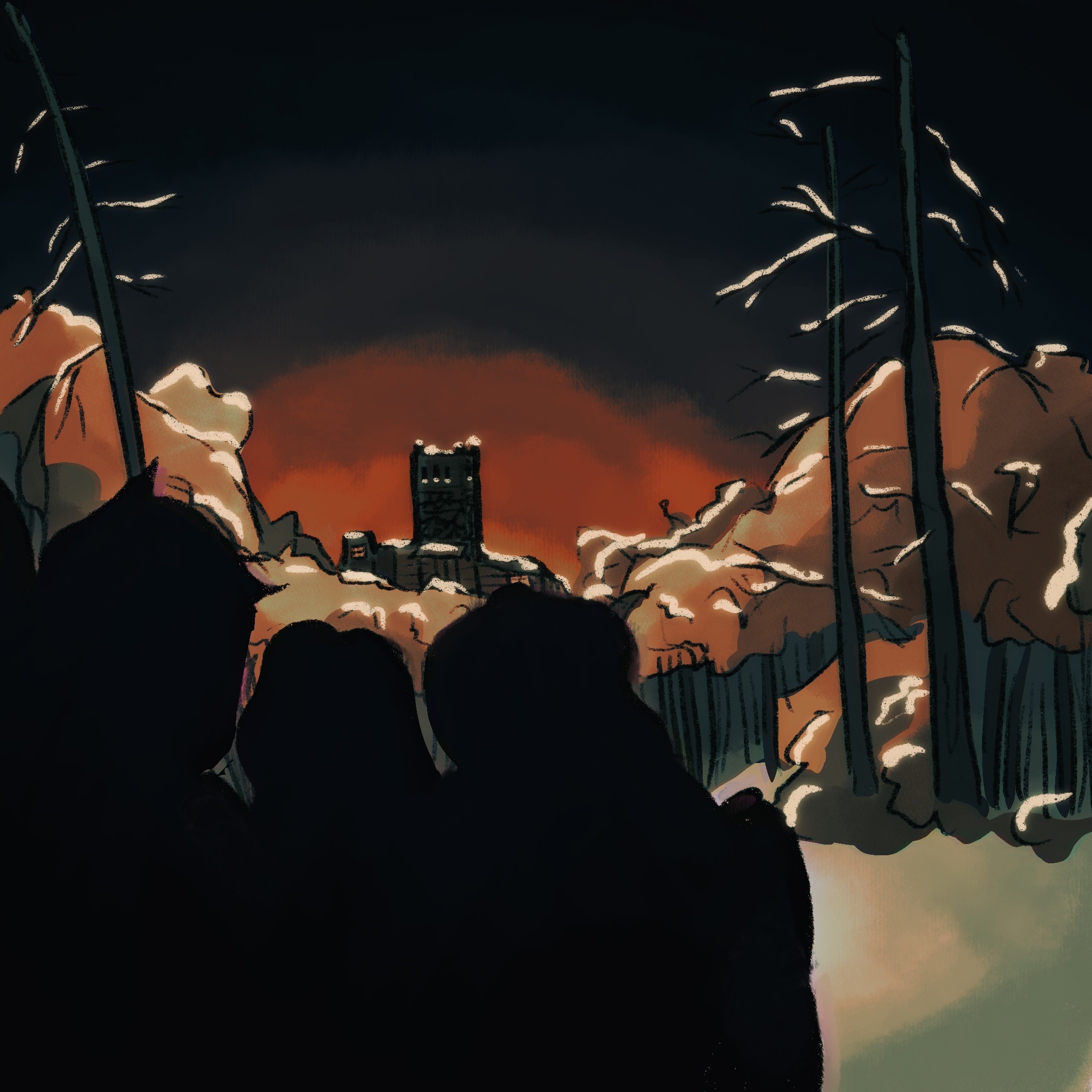