A mall of love (English version)

Eren Jaeger maybe isn't the most mature guy at his age, but he would'nt make this kind of jokes. Playing to be 'cupid' isn't funny, less if the other person works at the same mall than you and looks like a thug in conditional release.

Disclaimer: All these characters belong to Attack on Titan and Hajime Isayama. I just write this because is fun for me and I want people enjoy my stories.
Couple/Ship: Eren x Levi. They’re both adults, but if you don’t like or is uncomfortable to reading, please don’t read.
Warning: Please, if these topics aren’t comfortable for you, don’t read this fanfic. Read tags above. This fanfic is for adults only (+18). Non-con, drugs and violence.

His teeth squeaked a bit as he clenched his jaws. Jaeger felt like he’d die, and without even be sure if it would from shame or anger, it was really like having a mixture of both feelings right now, far from being pleasant for anyone in the current circumstances.

A word crossed his mind: fuck.

He froze, feeling like a real idiot as he listen Jean and Floch’s laughter. His cheeks were red and of course that they were colored by the rage. There was beating inside him this urge to hit that stupid face of Jean for doing this to him. No! Rather, he should be focused on finding the right words to apologize and explain to the other victim of that awful joke. 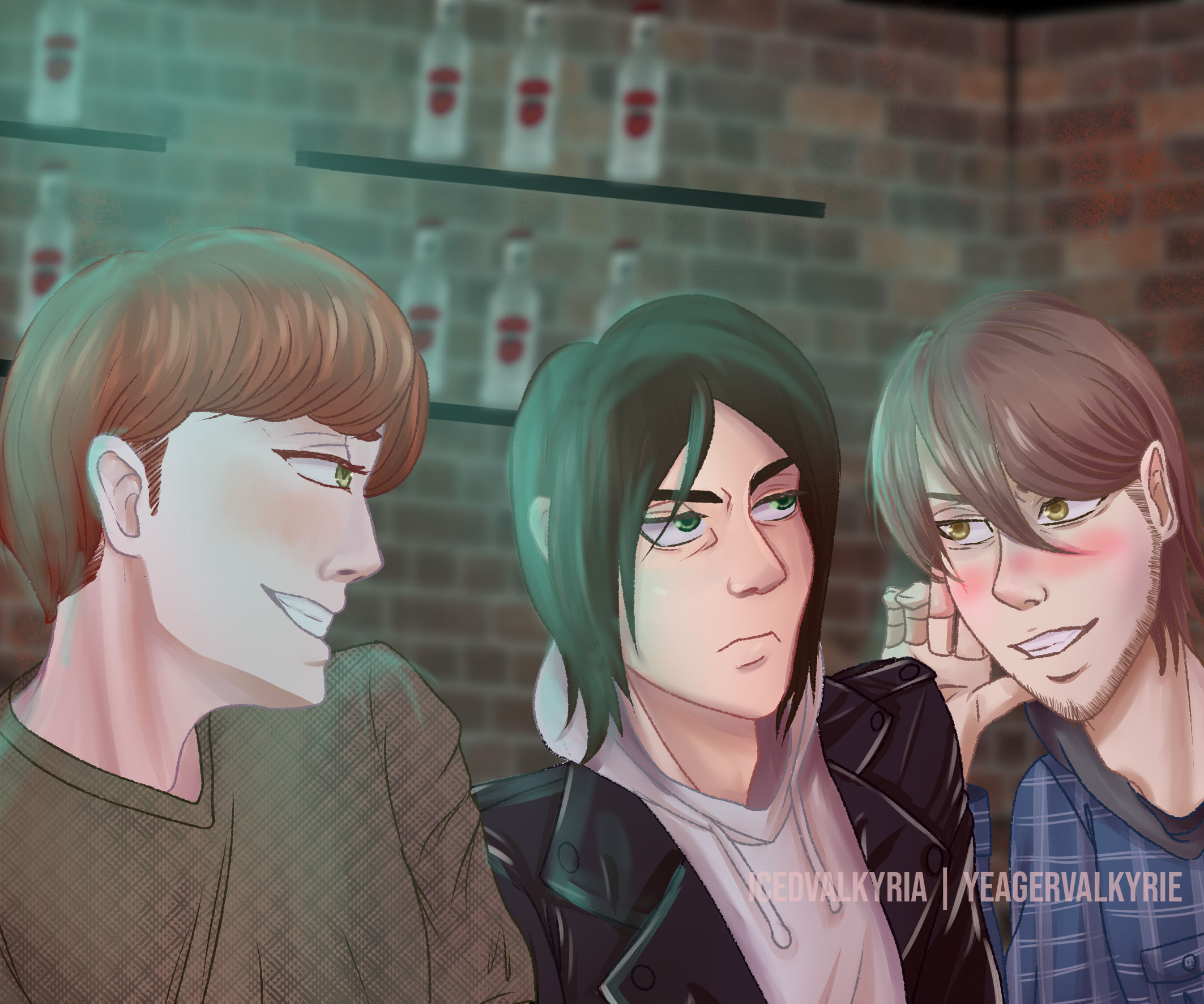 Absolutely, drinking with Jean and Floch was a mistake; actually Jean wasn’t a good drinker, besides he knew that Jean was bit sad those days after splitting with his partner. And he was being a good friend, he went there for hear him vent, but not for this.

Jean seemed to be a childish teenager again after 10 beers; Eren must have expected some kind of stupid joke… although he didn’t think it would involve anyone outside his social circle.

What just happened? Well, the Friday meeting, they used to meet every Friday there for some drinks before getting back home after work. The arrival of the weekend was the most expected and enjoyed worthily in that Coffee-Bar at Shingashina Mall. It was like a ritual carried out by many workers of that same Mall that for reasons of destiny and after see each other so often had managed to cultivate a friendship between them; sellers and dependents of the different stores for the most part, also cookers, baristas from other cafes, there were those who worked in junk food area.

It was incredible how a friendship arose after getting jobs either part-time or full-time, without even coinciding in places of study, nothing more was sympathizing with people who attended in the other adjacent places.

And there he was; Eren Jaeger, who spent his afternoons working in his parents' small candy store, because even if his career is not from that subject, he liked the idea that this family business would prosper more and more. He went there after his university classes and internships.

Today had been a good day, he had delivered one of his assignments getting a good grade, but now he was sitting at a table of that Coffee-Bar embarrassed because his drunken friend Jean wanted to be annoying, and in order to getting him involve into a trouble sent a beer to a guy who works in the salon who is in front of his parents' candy store, claiming it was from him and with a silly note of «I’m dying to meet you». Fuck! Besides that man doesn’t even look that friendly, no, the guy with tremendous biceps and tattoos always had that shitty face like he hated the fact that he was alive.

“Come on, Eren” Jean chuckled, his words crawling because of the drunkenness “You’ll thank me later, I’m sure. Let me know when you’re already a partner at the tattoo salon”

If that person beat him to death for this joke, his soul would be harassing Jean until the day he die.

Even if he was upset, he wasn’t a dumbass to let Jean and Floch in that drunkenness go to home in their own, no, he was a good friend. He called a cab to take them home and safe, fortunately these two idiots were roomies.

Before leaving, with great shame, it should be noted, he passed by the tattoo salon with the intention of apologizing, but that local was already closed. Eren wondered whether or not the person would have received what Jean sent from ‘his part’. Tomorrow he had to find out.

They left Jean and Floch at their apartment, and then he went home.

A/N: Thank you so much for reading, this is a story that I’ve been writing in Spanish, but I decided to translate it. Please, forgive my poor English, every day I do my best for learn and improving.

If I need to edit something, please tell me uwu

SanPan4582, Levi_Heichous_Ereh, Pastelsflowercrowns, and Khalessi_30 as well as 4 guests left kudos on this work!