Bet with Derek (AKA the Devil)

How could she have made such a dangerous bet with the devil? Or, as Casey personally knew him, Derek.

Rubbing the sleep out of her eyes, Casey winced at her appearance in the mirror.  She attempted to tame her wild mane as the other hand fumbled for her toothbrush.  Declaring her hair as a lost job, Casey scrutinized the dark circles underneath her eyes.  Just as she suspected.

The effort of blocking her intrusive thoughts was futile, and slowly, but surely, last night’s events materialized in the forefront of her mind.

Last night, Casey’s panic attack did not hit until after she donned her oldest pair of pajamas and gazed down at the lavender and lilac pattern.  The penguins seemed to ridicule her, their smiling faces laughing at her current predicament.  After crawling underneath her comforter, Casey acknowledged that comfort was exactly what she needed right now.  It was perfectly understandable how anyone could end up in the same position as her.  Right?

Okay, Casey reminded herself, just keep breathing and everything will be fine.

Too bad she was lying to herself.

Startled, Casey came back to the present, realizing her toothbrush was hanging out of her mouth.  After spitting, Casey heaved a troubled sigh and shuffled towards her favorite shower, caddy in hand.

A shrill shriek escaped Casey as she skidded across the slick tiles, barely catching herself against the stall’s wall before her head made impact.  Great, not even one day into this… bet and she was already falling.  She proceeded with caution, carefully undressing before she staggered into the scorching stream of water.

Even the thought of that word brought Casey to hyperventilation.  How could she have made such a dangerous bet with the devil?  Or, as Casey personally knew him, Derek.

Facepalming, she tried rationalizing with her thoughts again, but it was no use.  No matter what she told herself, when she left the sanctuary of the shower, she would still be greeted with the fact that she agreed to… date Derek.

Her mind struggled tying those two seemingly innocent words together.

Suddenly, Casey could not stand the suffocating confines of the shower stall.  She quickly shut off the faucet, throwing on her robe and gathering her things.  This time when she scurried past the mirror, she refused to look at her reflection.

Stumbling back into her dorm, Casey placed her caddy on her desk, but was distracted by the high pitch ding of her phone.  That was unusual.  No one texted her before her early morning class.

Blinking heavily at the screen, Casey gasped at the greeting. 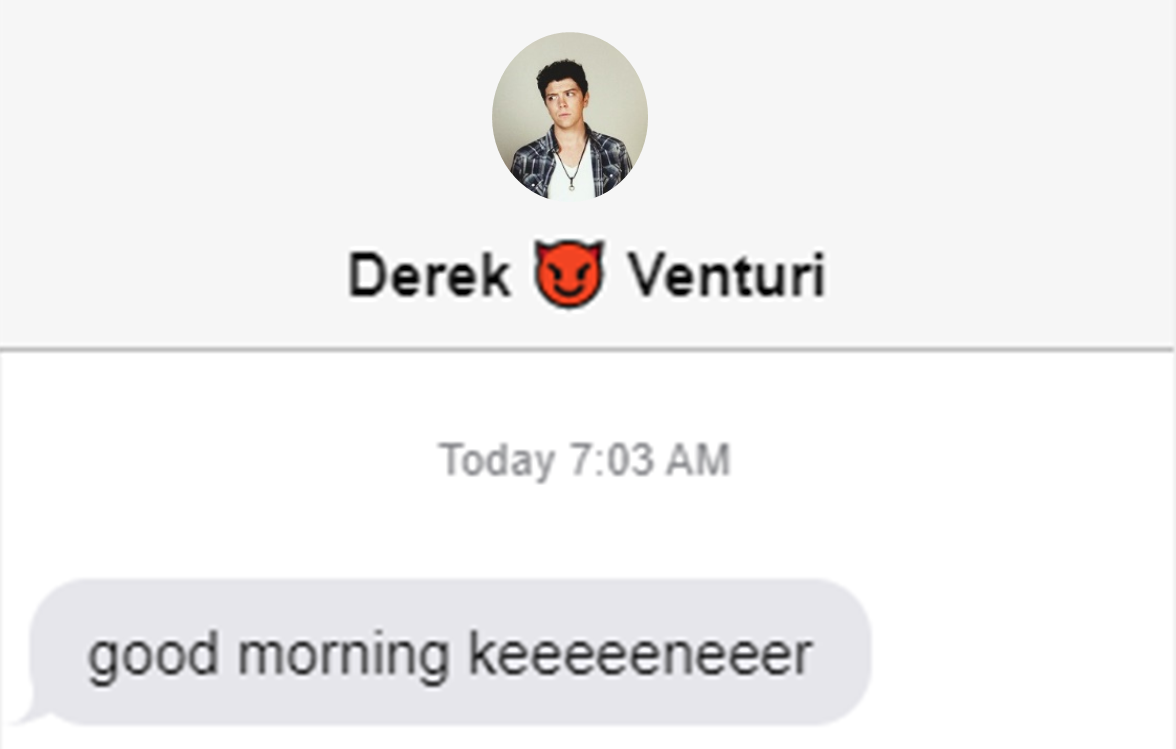 A good morning text from Derek?  This was indeed unprecedented territory.

Casey stood in front of her open closet door, the contents in an unusual state of disarray.  Biting her cheek, she reached into her pocket and pulled out her phone.  She wanted to avoid this, but Casey admitted defeat and called the number.  Hitting speaker phone, she tossed it down on her perfectly made bed and faced the nightmare of her closet again.

As soon as the line picked up, Casey launched at her best friend, “Hypothetically, I have a date.”

Emily snorted over the speaker.  “Casey, you either have a date or you don’t.”  Amusement crackled in Emily’s voice, “And hello to you too.  I’m fine, thanks for asking.”

“Sorry.”  Casey winced towards her best friend’s voice before she turned back to the closet, hands gripping anxiously at her hips.  “So… say I have a date.”

“Case— Casey!  Knock off the hypotheticals!”  Emily interrupted her friend.  “Breathe, please, and give me some facts.”

Casey did as Emily asked, breathing in through her nose and out through her mouth.  “Okay.”  Casey whispered, “What do I do?”

“You said you don’t know where he’s taking you?”

The eyeroll in Emily’s voice was evident.  “Case, work with me here.  It’s your first date with him?”

“You could say that.”  And yes, her voice was always that high pitched.  Thank you very much.

“That’s easy then.  Wear those jeans that make your ass look absolutely incredible.  You know the ones that we got on our last shopping spree before we left for uni?”

“Have you known him long?”

She nibbled at her lip, “Somewhat.”

“Casey—” Emily whined, “Fine, if that’s all the information you’re going to give me then you’ll have to settle for mediocre advice.  Wear that white top with just the right amount of cleavage and pair it with your black leather jacket.  Do you think he’d like leather?”

A sigh shuddered through Casey.  “Better make it flats.  I can’t have any… klutzy moments tonight.”

There was a beat of silence on Emily’s end of the line.   “Are you trying to impress this mystery guy?”

There was another round of silence as Casey squeezed her eyes shut.  Then she uttered inaudibly, “Yeah.”

“Then curl your hair in soft waves and pin it back from your face so he can see your gorgeous eyes.  Are you going to wear your sparkly blue eyeshadow?”  Emily teased.

“Okay?  I guess you’ll tell me when you’re ready.”

“Yeah… listen, thank you so much.  I better go.”  Casey shot a look at the clock and cringed.  “I don’t have much time to… prepare.”

“Send me a picture when you’re ready.  I want to see my masterpiece.”

“Come on, Casey.  If you’re not going to tell me about the guy, you can at least give me this.”

“Okay, have fun—” Emily’s voice oozed with laughter, “On your not-so-hypothetical date with your mystery guy!  And be sure to call me after so we can talk about all those hypothetical details.”

Casey buried her face in her hands and groaned.  No pep talk she could give herself would prepare her for this night.  Peeking through her fingers, Casey snuck another glance at herself.  She could admit that she looked stunning in the outfit Emily picked for her.  However, Casey refused to acknowledge that she put any effort into her appearance for him.  No, that was a confession for another day.  Wait, what?

Before she could rip apart and analyze that last thought, there was a knock at her door.  Speak of the devil.  Fighting a full-on panic attack, Casey talked herself into placing one foot in front of the other until all too soon, her hand was grasping the doorknob and yanking it open to reveal tousled locks and a painfully familiar leather jacket.  Derek.  And his classic Venturi smirk.  If danger had a physical form, it was standing in her doorway.

So, what if all the oxygen disappeared from the room?  Casey just needed to call the maintenance department because there was obviously something wrong with the ventilation system.  She should stay home and take care of this issue.  The safety of her dorm hall was in her hands.  That was something she should not take lightly, but Casey should definitely ignore the way Derek’s eyes were tracing over her figure.

Eyes alight with mischief, Derek met her stare.  “Leather for me?  You shouldn’t have.”

Inwardly groaning, Casey chastised herself for not finding the words to berate him for objectifying her.  Yet, despite herself, a thrill ran down her body.

Ignoring her inner struggle, Derek pulled at the front of his beloved leather jacket and a devilish smirk crossed his face.  “Careful, Case.”  Derek hummed, his eyes scanning her figure again as his tongue darted out to wet his lips.  “You’re playing with fire, looking hot as hell.”

Against her will, Casey’s cheeks colored as she yelped, “Der-rek!”

He only smirked, raising an arm above his head to nonchalantly lean against her doorframe, bringing his face closer to her as he gazed down at her.  “Ready to go?”

Casey gave a tight nod, collecting her keys and purse from the hook by the door.  Taking her shove to his shoulder, Derek stepped back enough for her to slip out. Turning her back to him, Casey paused to lock the knob.  His presence behind her had nothing to do with how many times the key slipped out of her hand.

Ignoring his snickers, Casey marched down the hall, throwing a look at him over her shoulder.  “Are you coming or what?”

An easy smirk slid onto his face as he sauntered down the hall after her.  Reaching her, he draped a casual arm around her shoulders.  It was a gesture Casey knew well, but this time, the action… weighed on her, so to speak.

“What?”  She looked up at his profile, studying Derek’s bemused smile pulling at the corner of his lips as he steered them out into the parking lot.

Rolling her eyes, Casey inquired, “Are you going to tell me where we’re going?”

He clicked his tongue.  “Trust me.”

“That’s like asking me to trust the devil with my soul.”

Derek snorted a laugh.  “Give the devil his due, Space Case.”  He glanced at her, quickly opening the Prince’s passenger door for her.  “I got you.”

Climbing into her seat, Casey watched Derek crossing in front of the Prince as she muttered under her breath, “That’s what I’m afraid of.”

The roguish grin he sent her as he started the ignition only confirmed her spiraling thoughts.

I had no intentions of starting another series while working on This Is Life With Derek, but here we are 😅

Hope you enjoyed 😘 Let me know your thoughts on Casey's POV.