With the support of the community, we've raised US$264,918.85 this drive. Thank you so much! (We accept donations year round, so if you haven't donated yet, there's still time to add your support!)

How Will I Know

Chapter 7: I fall in love whenever we meet

23 year old Jamie is expected to pick and marry a simple, meek, obedient girl from his father's parish and become a priest worshiping at the Christian Orthodox church's altar.

And he eventually would have, had Claire not moved into his neighborhood, opening up a flower shop.

But Claire is not from his father's parish. She is definitely not simple, meek nor obedient.

———
This work is an entry for @outlanderpromptexchange's challenge, song lyrics, over on tumblr. My song selection for the prompt is "How will I know" cover by Sam Smith, particularly “I fall in love whenever we meet / I'm asking you what you know about these things“.
(you can also follow me @crossworddreamer on tumblr) 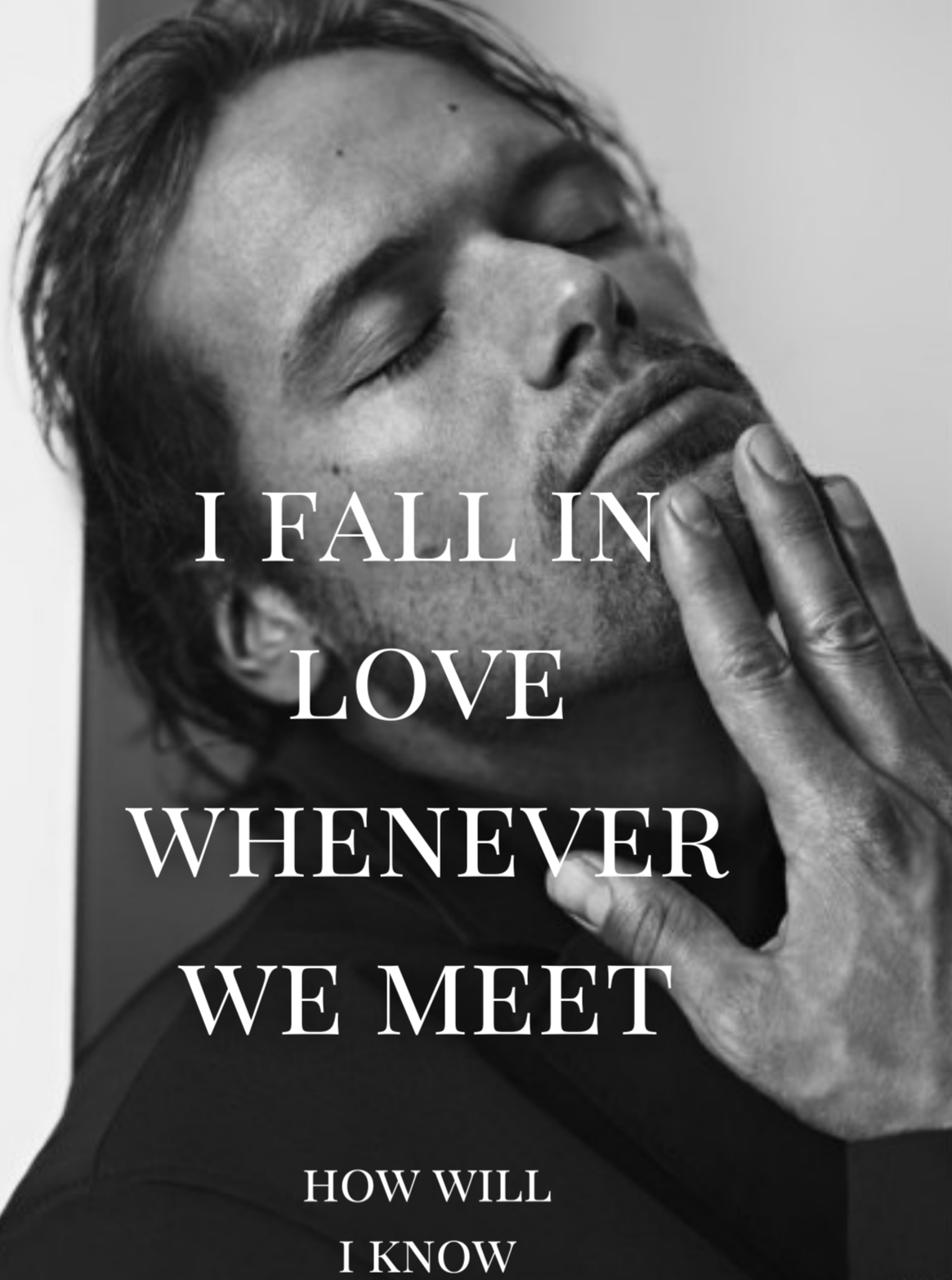 I fall in love whenever we meet

Looking up from their entwined hands, Jamie noticed Claire's eyes going a few shades darker in the span of a few moments. She looked back at him and then lowered her gaze to his lips to which he bent his head towards her slightly and she met him halfway, pressing her soft lips against his. He'd dreamt of kissing her again, really taking his time to savor her, and now that it was happening urgency hit him like a freight train and he found he simply could not keep his passion in check when it came to this woman.

Maybe when he'd been at her place it had all been a new experience, heady with the novelty of having her grind against his cock, whiskey had maybe played a part in it though he'd only had a couple of glasses-- but she'd had quite a few, still, her passion could've been a direct result of that for all he knew, and not much to do with him at all. But now, kissing her atop that hill, no romantic setting, no "liquid courage" as she'd called it, it felt just as heady. She moaned into his mouth and the sound went right to his cock, making it throb painfully. He panted heavily, gathering her onto his lap, sinking his hands into her arse over those jeans that appeared to be plastered over her skin. She felt just as amazing as he'd remembered. Even better, in fact. He supported all of her weight in his hands and bent forward slightly, holding her as if she weighted nothing, and she giggled never breaking their kiss "Fuck, you're strong". She ended her sentence in a whimper as he trailed kisses down her neck and buried her hands into his hair, and he found that he liked the way she lightly pulled on his curls when she got hot and bothered.

"How about this rock?" she gasped, grinding against his erection and he groaned loudly, spurred on "But you painted a picture I can't get out of my head now" she panted and moved her lips to his earlobe, taking it into her wet mouth and playing with it

She looked around and he also noticed it was getting dark, they probably would have to get back to the car, it could get pitch black once the sun set completely "Are we quite alone here, do you think?"

He raised an eyebrow and before he could answer that they were probably the only ones around for miles she sunk to her knees, pushing his legs further apart "I want to scrape my knees. I want to look at them later and remember how it felt when I took you into my mouth

Jamie's mouth fell agape, watching her looking up at him from beneath her eyelashes, then she palmed him over his trackpants, massaging intently. He placed his hand over hers, stilling her, his brows furrowed. But he couldn't get himself to remove her hand, his traitorous member twitching against her palm, encouraging her to move her thumb over the head, making his eyes roll back in pleasure. "Lass, I cannae..."

"Don't you want me to? I'm dying to taste you, Jamie. Been thinking about it ever since you left before I got to do it..." she rubbed her cheek against his thigh like a kitten and his grip on her wrist softened, allowing her room to move her hand better against his crotch. "You did say raincheck" she pleaded, her voice husky

He hissed, as she toyed with the strings holding up his trackpants "Of course I want ye to. I havena been able to stop thinking about it...Fuck!" he cursed as she finally made her way past his boxers and took him bare into her hand

She whimpered, tracing her finger over his precum and rubbing it further down his length "You're spectacular"

He looked down at her through hooded eyes, she licked her lips in anticipation looking at his cock and how her hand was moving up and down its length as if it were a work of art. He panted in anticipation, and could almost spill himself in her hand, she was touching him just right, it felt better than he could have ever imagined. He pushed all thoughts of propriety away, let alone of guilt over what he was allowing her to do to him. His desire was outweighing everything, and most of all, it felt right. She made it feel right.

He barely had time to process all of that before he felt her hot breath against his skin closely followed by the feeling of her wet, hot mouth around him. He huffed out a laugh, his heart was threatening to burst out of his chest. Christ, it felt unreal. She closed her eyes in ecstasy, moaning as she took him in deeper and deeper and he groaned, suddenly unable to keep still. He threaded his fingers into her curls at the nape of her neck, not guiding her head in any way, but almost desperate for her not to pull away. He tugged on her hair slightly and that earned him a low moan from her and the vibration of it against his cock almost made him lose it completely. He was fighting the hardest internal battle, he didn't want to come, wanting to prolong what she was doing to him for as long as possible, but at the same time he desperately needed to.

She hollowed her cheeks, sucking more intently and stroking what she couldn't fit into her mouth more vigorously and he actually began seeing dark spots, he was so far gone "Ffffuck!" he hissed, pulling at her hair a bit tighter and she gave him some respite licking him top to base, while toying his scrotum into her hand

"Oh" she shuddered and then looked up at him hungrily "That's it, Jamie. Talk dirty to me" she whimpered

He couldn't understand how she could sound so turned on by what she was doing to him. He leaned forward closer to her and asked in a low voice that he himself didn't recognize "Ye like it, don't ye, ye wee vixen? Bringing me to my knees like this"

"I believe I'm the one on her knees" she smiled wickedly before redoubling her efforts "Yes" she huffed "yes, I like it, I can't wait for you to come in my mouth"

He let out a strangled moan, he was more than happy to oblige. Christ, her words only spurred him on. He was already on the brink of sanity. What she was doing to him felt so incredible, she looked unbelievable going down on him, he thought nothing he'd ever imagined had ever even come close to the reality of it "Oh, God. Oh, Claire!"

She sucked him intently and moaned low in her chest when he finally came, swallowing every last drop he'd given her. She didn't stop afterwards, still stroking him gently, bringing him down from his high then finally releasing him with an audible pop. He immediately scurried her into his arms, kissing her for all he was worth.

"Thank you for the raincheck" she winked at him and he grinned ear to ear. How was she the one thanking him?

"We're not done here" he warned her "But I'll have tae ask for a raincheck again, we should get going if we ever hope to find our way back to the car"

She raised her eyebrows "Oh, I like the sound of that" she purred, melting against his touch as he caressed her all over, needing to touch her, feel her in any way he could. For some reason, he found that his thirst for her had not been quenched, not in the least. If anything, he only felt the need to take her, to posses her body and soul even more than he did before.

Later that evening, after he'd somehow managed not to invite himself into her house and finish what they'd started, getting his full of her kissing in the car like lovesick teenagers, he drove himself home and waited for debilitating guilt to engulf him. But it never came. He did not regret what had happened between them, not in the slightest, and it still felt as right as it had before, even now, his mind clear, without her in his arms to distract him. He was alone with his thoughts and the more he thought about it-- the more he wondered why he didn't feel any guilt... the more an idea began to form in his mind. And the realization made his heart skip a beat everytime it popped into his mind.

In spite of what had just happened, in spite of the powerful physical attraction that was undeniable between them, it was more than that. So much more.

He'd probably known it, deep down, all this time, but tried to justify it as just a crush. Just lust.

Because as much as he kept replaying what she'd done to him with that beautiful mouth of hers, what really made his heart flutter was what had lead up to that, what she'd shared about herself, what she'd opened up about. And he was dying to find out more about her just as much as he was dying to make good on that raincheck and devour her. He couldn't wait to peel all her layers off, both emotionally and physically. He couldn't wait to hear her tell him more about herself just as much he was dying to hear those incredible moans and wee noises she made when she was in the throes of passion.

whaaaat i updated both my fics today? XD