Want to know where your donations are going? Check out our latest budget update and donate today! We've raised US$234,131.12 towards our goal of US$50,000 so far!

Love Inside This Madness [Art]

Tony Stark Bingo (Mark IV) - T4: Kink: Bondage
STB Bingo (Round 1) - N3: Free Space
-
Tony asking if he trusts him is like asking Bucky if he needs air. The answer is always going to be a resounding, “Yes.”

“There is love inside this madness
We are walking on the moon
Though I don't believe in magic
I believe in me and you”
- Bea Miller, Fire N Gold

Title: Love Inside This Madness
TSB Card: #4056
Square: T4 - Bondage
Ship: Bucky Barnes/Tony Stark
Rating: M
Warnings: Naked cuddling, light rope bondage
Summary: Tony asking if he trusts him is like asking Bucky if he needs air. The answer is always going to be a resounding, “Yes.”
For the Tony Stark Bingo

A/N: Inspired by this photo. I had a lot of fun recreating it, and I'm proud of how Bucky's arm turned out! All the kudos to Bleakloft for giving me a few pointers, ilysm :3

Those four words are dumb. At least, Bucky thinks so. Tony asking if he trusts him is like asking Bucky if he needs air. The answer is always going to be a resounding, “Yes.”

Tony is good with his hands; Bucky had figured as much even before finding out that he had built a miniature Arc Reactor in a cave. It’s in the way the Iron Man armors look. It’s in the way Tony solders mechanical components or tinkers with his cars.

It’s even in the way Tony always takes his time tying the rope around Bucky’s wrists, methodical and sure. He can break out of it with ease if he wants to, but with Tony, he never feels like he needs it. It’s in the way Tony’s fingertips dance along his skin, over his ribs, before finding purchase in his hair.

Tony grasps Bucky’s face lightly, angling his head up so he can capture his lips in a kiss. Bucky groans when Tony licks his way into his mouth, the taste of him heady and familiar. 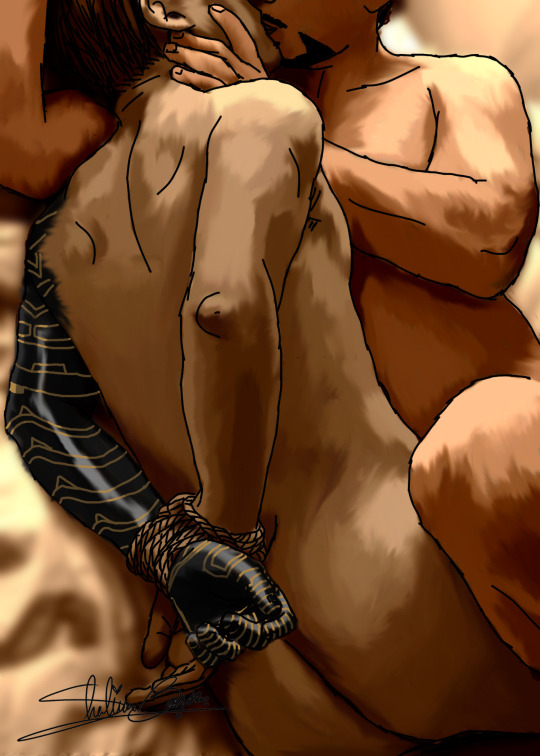 Check out my linktree for tumblr, discord, and other socials!