With the support of the community, we've raised US$264,918.85 this drive. Thank you so much! (We accept donations year round, so if you haven't donated yet, there's still time to add your support!)

Geralt looking after Jaskier in his own way

I work this pic inspired by lovely fan fiction [ Under the Weather] by proctor.

I read the fic, and liked it so much. So I got permission to translate, and I couldn't stand the specific image while working on the translation, so I ended up drawing.

Please enjoy the adorable moments of the two idiots. 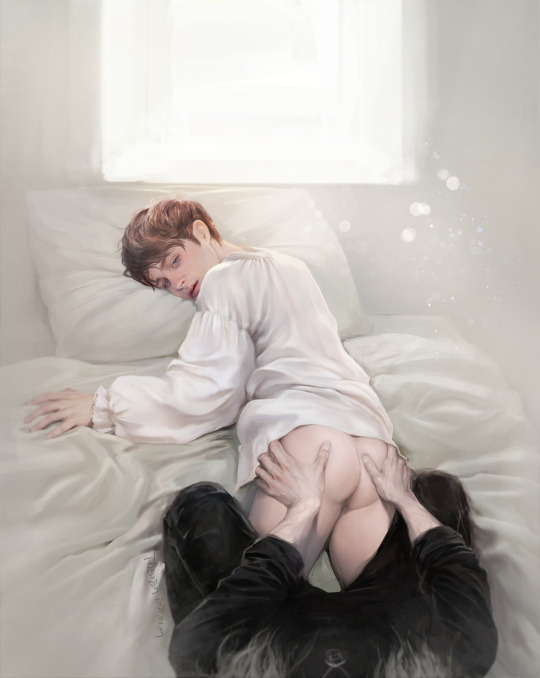 “Mmm. Down a bit,” Jaskier instructed, and Geralt found himself complying instantly, unused to being ordered around, but strangely willing to appease him.“Lower.” He massaged his lower back, circling his thumbs near the base of his spine. “Bit more.” Any further down and it would take him past the hem of his shirt and onto his partially exposed backside… though he imagined that was precisely the point, and who was he to argue, he quite liked the feeling himself. He ran his palms over the soft curves of Jaskier’s buttocks, hands slipping beneath the thin fabric, and pushed the supple flesh upwards, the cheeks giving a sweet wobble each time he let go. “Mmm. Inward a bit.” Repeating the movement, he drew his thumbs in, running them deep into his crease, and could feel the humidity radiating from his hot little hole. “Liiiitle bit more.”

“Is this your attempt at subtlety, Jaskier?” he asked with a raised eyebrow.

Jaskier turned his head to the side, smiling up at him with one visible pale-blue eye. “It is. Am I good at it?”

“Clearly not,” he replied, returning his smile with a small one of his own. 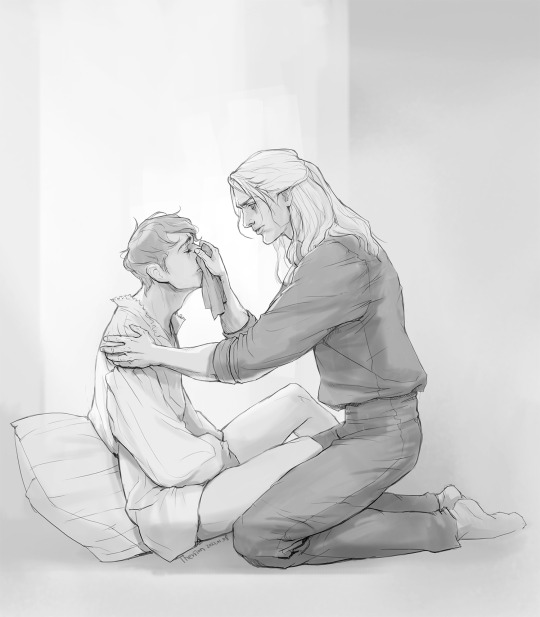 He picked up Jaskier’s handkerchief and tutted. “Blow your nose then.”

Jaskier lit up. In truth, he had not expected his request to be met, but his boldness (at least on this occasion) had clearly paid off. He shifted his weight onto one elbow and lifted his head, about to reach for the handkerchief, but just as he did so, Geralt pressed the cotton on either side of his nostrils, encouraging him to blow. Another man might have felt his pride compromised by being assisted with such a thing, but Jaskier considered it a lovely gesture and blew heartily.

Geralt gave his nose a few squeezes to coax the worst from him, and when he was done, wiped it along with his upper lip until he was clean then hung the rag over the headboard and bent down by the bed so that they were face to face. He made no move on him though, and they both simply looked at each other in silence, eyes roving over one another’s features.

It was a picture with a lot of errors, XD  but I enjoyed it very much.

I quoted some passages from the original fic to explain the picture. If that can be a problem, please tell me.

I once again thank Proctor for permission to translate and write lovely works. :)