Clyde stared blankly at his two friends. His mind was swirling with questions—questions he wasn’t really sure he wanted answered.

“Uh...could you repeat that for me one more time?” he asked.

“It’s super easy, dude,” said Craig. “Tweek and I just need you to film this for us. We can’t really film it ourselves, you know?”

“Exactly. I don’t see why that's so hard for you to understand,” said Tweek.

The additional Clenny vibes is because I can't not put Clenny in when given a chance.

Clyde stared blankly at his two friends. His mind was swirling with questions—questions he wasn’t really sure he wanted answered.

“Uh...could you repeat that for me one more time?” he asked.

“It’s super easy, dude,” said Craig. “Tweek and I just need you to film this for us. We can’t really film it ourselves, you know?”

“I mean...you could . Just, like, prop the phone up on a table somewhere. I really don’t get why you need me to film it.”

“Jesus, Clyde— ngh ! You’re making such a big deal about this! It’s not like we’re asking you to film us fucking or anything,” said Tweek. His growing irritation was audible.

Clyde motioned to object on the ground in front of him.

“I don’t see what the problem is,” said Tweek.

“Exactly. I don’t see why that's so hard for you to understand,” said Tweek.

“In our defense...we didn’t tell you that’s why we were inviting you over because it probably would’ve scared you away,” said Craig.

“Of course it fucking would have! You two seriously don’t see how I could possibly find this just a little weird?”

Tweek and Craig exchanged looks, shaking their heads before looking back at Clyde.

“You don’t think that I might not be super interested in watching my best friend get his ass reamed?”

Tweek and Craig muttered between each other. Clyde’s eyes widened as they still didn’t seem to get why he’d be uncomfortable fulfilling their request.

Craig stood up and walked over to Clyde. He put his arm around his shoulder and gave him a gentle squeeze. “My dude, we’ve known each other for a long time, right?”

“And we were roommates in college, right? Remember all those times we accidentally walked in on each other jerking off?”

“And remember that time you walked in on me getting head from some rando in the bathroom at that club in Vegas senior year?”

“See, Clyde? You’ve seen my dick many times before. This is no different!”

“No different? Your dick is different than your gaping asshole, Craig! And you’re both being gaping assholes right now! I gotta...I gotta go to the bathroom and think!”

Clyde ran into Tweek and Craig’s bathroom and locked the door behind him. He rubbed his temples with his fingertips. He was still in disbelief that this was even happening right now. He’d always been a bro who was down for any sort of shenanigans—ever since middle school. He and Craig had gotten into a lot of strange situations together over the years and they never made their relationship weird. If anything, those strange situations were bonding moments and made their friendship stronger in the end.

Clyde sighed. He didn’t really want to walk out on his friends, but he still didn’t feel totally comfortable with this entire stunt. He knew there was only one person who could help him figure out what he should do.

“Hey Kenny. I’m not at home. I’m actually at Tweek and Craig’s right now. I need you help to decide if I should go through with this favor they're asking me.

“What? No! I’m not gay, Kenny! Although honestly, that wouldn’t be nearly as bad as what they did ask.”

“Alright then dude, lay it on me.”

Clyde pulled his phone away from his ear as Kenny roared with laughter.

“DO IT! That is fucking amazing! Dude, you think they’d be okay with me—? Nope, fuck it, I’m just coming straight over. See ya soon!”

Clyde sighed as the call ended. For a fleeting moment, he debated about calling him back and begging him not to come, but there’s one thing he knows about Kenny—once he decides that he’s going to do something, he does it.

Clyde unlocked and opened the bathroom door, shuffling back into the living room like it was a walk of shame.

“Hey guys, so I hope you don’t mind Kenny says he’s on his way over—”

He found Craig kneeling down with his knees spread, leaning his hands against the far wall of the living room. He noted Craig’s immaculately shaved balls hanging between his legs, as the pants he was previously wearing were nowhere to be found. Clyde admired the shave job, contemplating if he should commend his friend on a job well done. He quickly changed his mind once he noticed the small ramp that was placed right behind him.

“What the fuck,” he said. “You guys are actually serious about this? Also come on, you gotta warn a bro before you just go free balling it around him!”

Craig glanced over his shoulder at Clyde. “You had ample warning, bro. This is happening whether you film it or not. But seriously, we’d really like you to film it, please.”

Craig placed his hands on the wall and looked over his other shoulder, smiling at Tweek. “I know Tweek is the person I want to spend the rest of my life with because of stuff like this.”

“I love you so freaking much,” said Craig.

“Perfect,” Tweek purred, leaning in close to Craig’s ear. “I can’t wait to ride this into your tight little asshole.”

Craig groaned and turned to Tweek, his face flushed. “Dammit Tweek, you know what you talking like that does to me.”

Tweek grinned. “Yup. That’s the point.” He smacked Craig on the ass before carefully rolling the skateboard back to the starting position.

Clyde subconsciously bit his lip. He could feel himself begin to stir below his belt, but he was not ready to deal with what that meant, so he ignored it.

The apartment door flung open, jolting Clyde out of his dazed stupor.

Kenny closed the door behind him and pulled down his hood. He stopped next to Clyde and slapped him on the back.

“Thank you so much for telling me about this, dude. I had a shit day at work, so something stupid and sexy is exactly what I needed.”

“I agree with stupid, but how is this sexy?” asked Clyde.

Clyde stared at his best friend. His face was rosy pink, his head thrown back, his mouth open. Soft, panting moans were falling from between his lips. Clyde’s eyes wandering to his ass—full, round, and surprisingly perky. He could see Craig’s engorged cock hang down between his legs. Clyde swallowed hard.

“Are you kidding me? I’ve been waiting to see Craig finger his ass since high school!” said Kenny.

“Calm down, Tweek. I never thought it was actually going to happen. And you’ve known for years that I think Craig’s hot. If I, Kenneth McCormick, know anything in this world, it’s that Craig is hot, you’re an addict, I’m a slut, and Clyde’s in denial.”

Kenny patted Clyde on the shoulder and quickly glanced down at the outline his erection made against his jeans.

“I’ll tell you when you’re older, buddy.” He turned his attention back to Tweek and Craig. “So you guys almost ready?” It was hard for him to hide his giddy anticipation.

Tweek stood up, wiping the excess lube onto his pants. “I’m ready when you guys are.”

All eyes were on Clyde. He looked at his phone, ready to film. He sighed, resigning himself to his fate.

“I’m so fucking excited right now. I wish I had had time to stop and get some popcorn!” Kenny bounced up and down on the balls of his feet. 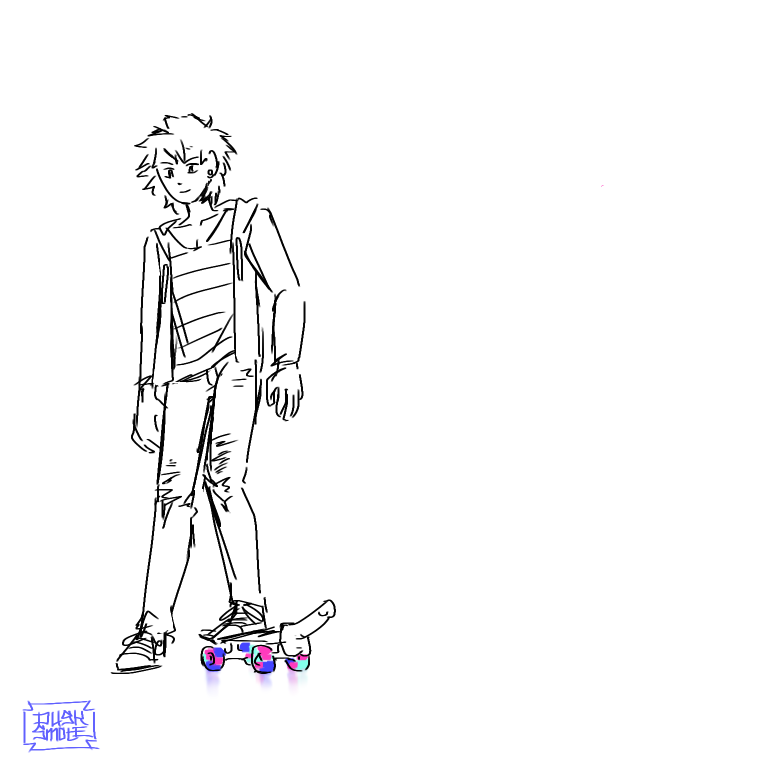 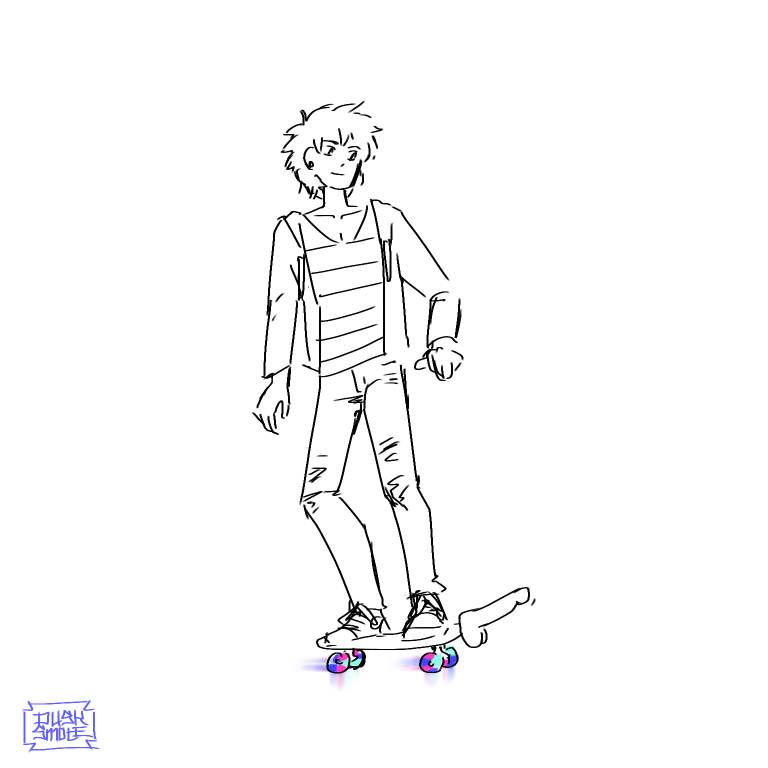 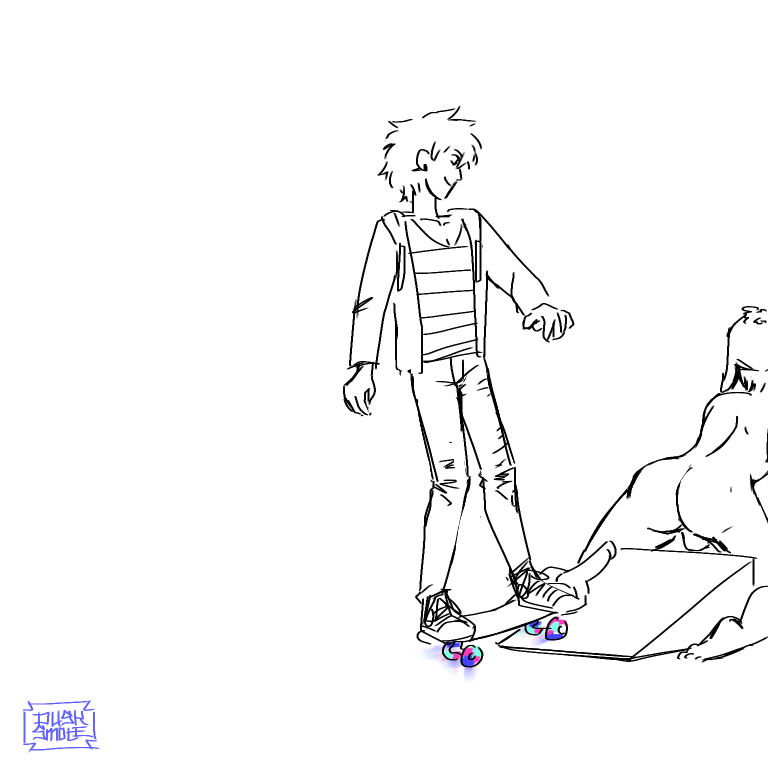 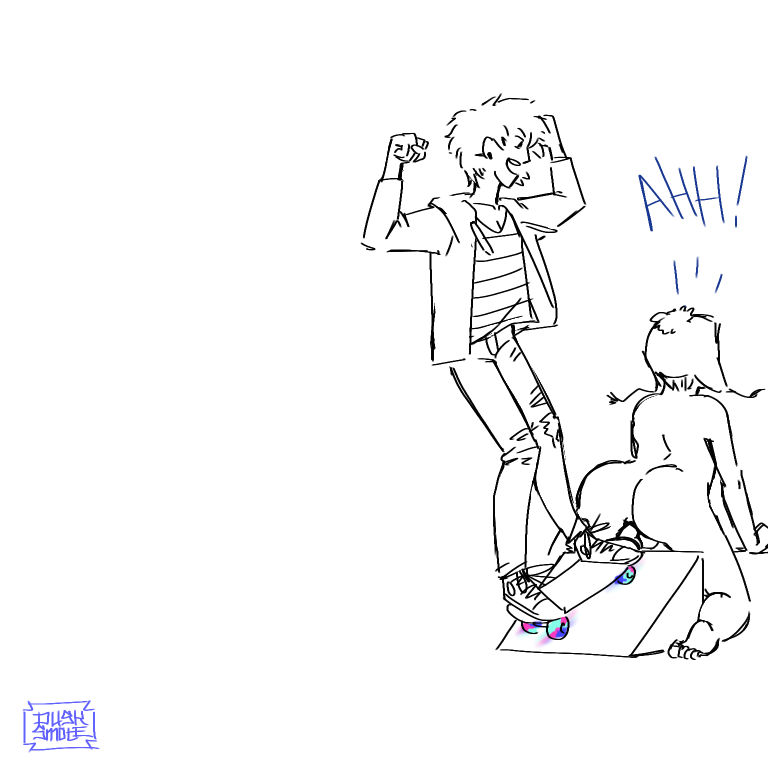 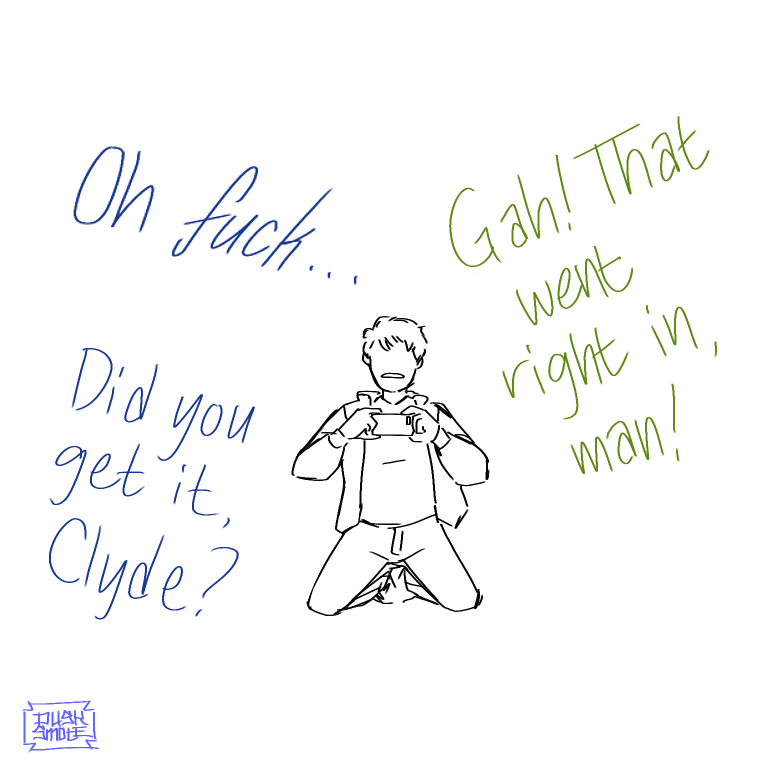 [Art by Dusksmote, used with permission]

A squelching sound was heard as Tweek and the skateboard rolled back down the ramp. Tweek raised his arms up in the air, victorious.

“Bullseye!” cheered Kenny. Kenny ran over and high-fived Tweek as he hopped off of the board.

“ Ohh ...oh my god, that was so fucking deep…” Craig whispered, his body still shuddering. He turned around and dropped onto all fours. “Tweek,” he called out.

“I’m right here, Craig,” Tweek said, running over to his side. “Baby, that was the sexiest thing I’ve ever seen.”

“Right now? Here on the floor?”

“I love you so goddamn much.” Tweek pulled his shirt up over his head and tossed it to the side.

Clyde didn’t notice that Tweek’s shirt had landed on his feet. He was entranced by his friends about to fuck in front of him on their living room floor. His breath was heavy and his mouth was dry.

“I, uh…that...that sounded like it felt really good.” Clyde could barely get out his words.

“Didn’t it though? Would you want to try something stupid like that?”

Clyde nodded faster than he would like to admit.

“Sucks we don’t have a skateboard, though,” said Kenny. “You know, I could just fuck you in my truck.”

Clyde whimpered and nodded even faster. “Yes. I want that.”

Kenny put his arm around him and helped guide him toward the apartment door. “Let’s give these two some privacy.”

“Kenny...am I gay now that I watched that?” Clyde asked.

“I’ll tell you all about your latent bisexuality when we get home.”

Thank you for taking the time to read this ridiculousness! If you enjoyed it, please take a moment to leave a kudos or comment.

Social media: @otherluces on Tumblr and Twitter; Luces#5969 on Discord